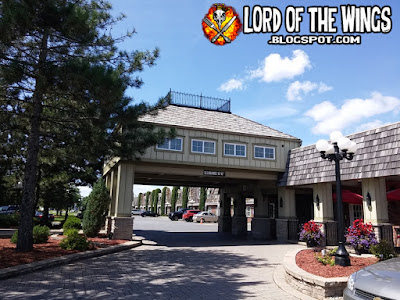 The only reason I even knew to look for wings at The Best Western is the extremely local online newspaper The Cornwall Freeholder. Driving past the hotel you wouldn't even know that there are actually 3 restaurants on site. Winner's Sports Bar is the one I was interested in. 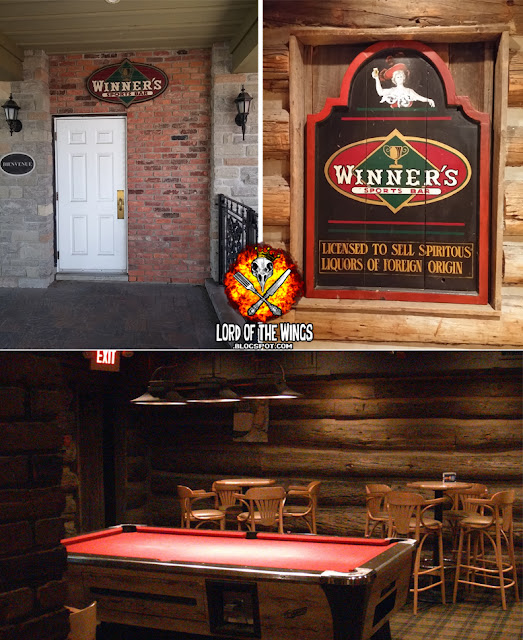 This place is a small maze to find and feels like a secret. First, there is a very plain white door (see photo above). I wasn't sure if I was supposed to go in this door, but I decided to try it. It led me down a staircase, where at the bottom I saw another plaque for Winners (see photo above). It's like I was on a treasure hunt. This led me into a wood paneled room with chairs and tvs, but it was clearly not the main entrance. This room had 2 more doors; one led to another hall, which also leads to an entrance inside the hotel. The other led to a small room with a bar and several patrons and I was immediately 'among' them, which made me a little unconformable as a single diner who was going to be taking food pics. This bar room had 2 more doors; one leads to another exit that goes to another part of the hotel, the other into a smaller room with a pool table, a popcorn machine (free popcorn!) and some tables. I felt like I was in some sort of Choose Your Own Adventure/Dungeon & Dragons maze in the basement.

The pool table room only had high tables, and I'm not a fan. The bar room was too exposing so it was out. So it was back to the main room. I was nervous I wasn't going to get any service because there was no one in the first room, so I made sure the bartender see me go in. He came around and brought me a menu. 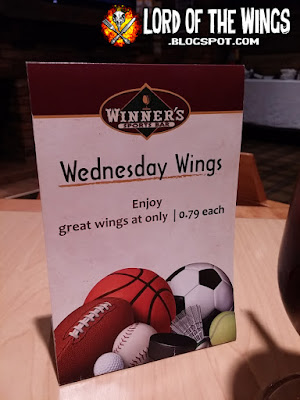 The whole reason I came here was that it was a Wednesday, and I had seen online that Wednesday was their wing day. When the bartender served me, he brought a little plastic sign advertising the wing specials.

I looked over the menu and had a bunch of questions about the wings. I asked what the Chef Fabs Sauce was, and this prompted the bartender to get the cordless phone and call the kitchen at my table. I felt a little embarrassed as he talked to them over the phone but he said he wanted to make sure he got the information correct.

On this first visit, I asked for an order of Hot, Cajun, and a side of the Chef's Fab Sauce. On my 2nd visit a month later, I ordered Cajun (and Hot). 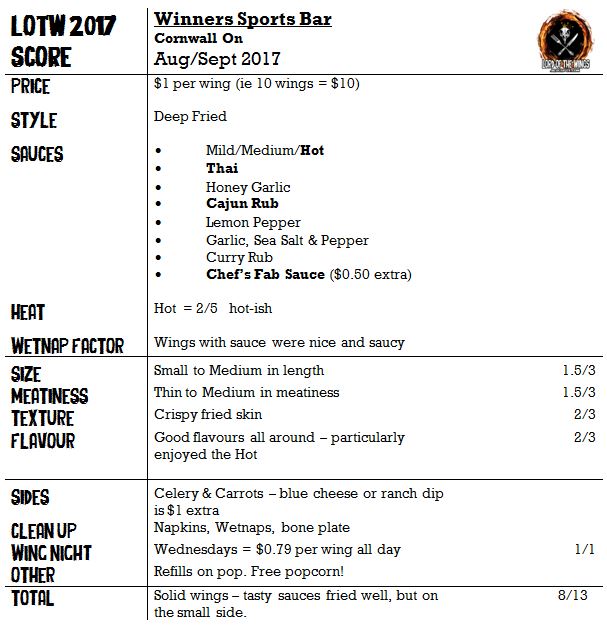 The wings are not sold by the pound or a certain number, but by the individual wing at $1 a pop. It makes it easy to order. So when I was ordering, I went with 5 of each flavour (at $0.79 on wing day). Side note, the wing special is all day long.

Also, the wings came with carrot and celery sticks, but if you want blue cheese or ranch, that's another charge.

The wings varied a bit from small to medium in both length and meatiness. But they were deep fried well creating a nicely crispy skin.

I really liked the hot here - this was not just Frank's sauce on the wings. It had more depth of flavour. It reminded me of the wing sauce at Moose Winooskis - thick, spicy but also a hint of sweet. The bartender told me they had a hot shot new chef and that they wouldn't give me the details of this sauce because it was his own creation. It was so good the next time I went I got it again. 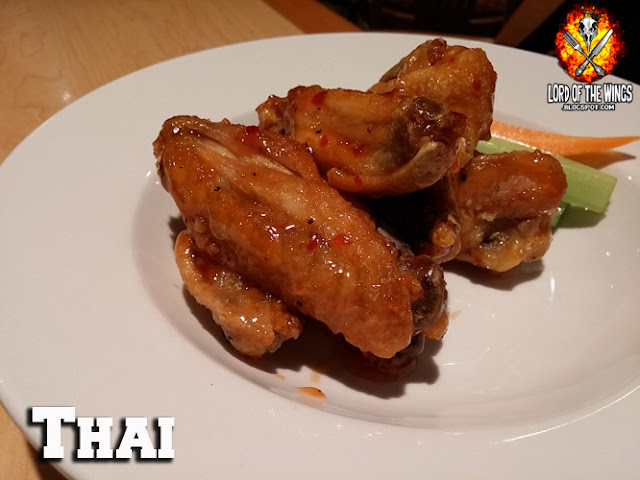 Wait, Thai? Wing King, didn't you say you ordered Cajun? Why yes observant viewer, I did order Cajun, but I got Thai. That's ok I guess. I didn't complain, but the sweet chili sauce, while generic, was a nice change from what I usually go for.

I got this sauce on the side - a secret concoction - but I figured it out pretty quick. It seems to be the Thai sauce with a lot of sesame oil, and some seasoning. It's very Asian and it's heavy on the sesame oil. It was not my thing. 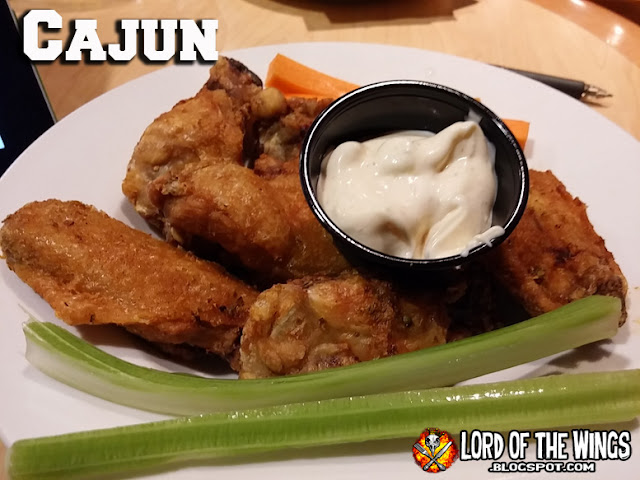 On my second visit to Winners, I did order that dry Cajun. Like most places it is tossed on off the wings have gone through the deep fryer. It's good in that it highlights the crispy wing, but there wasn't enough seasoning to make an impact. They also gave me a dip this time, but it was like a tartar sauce, which is a little weird. 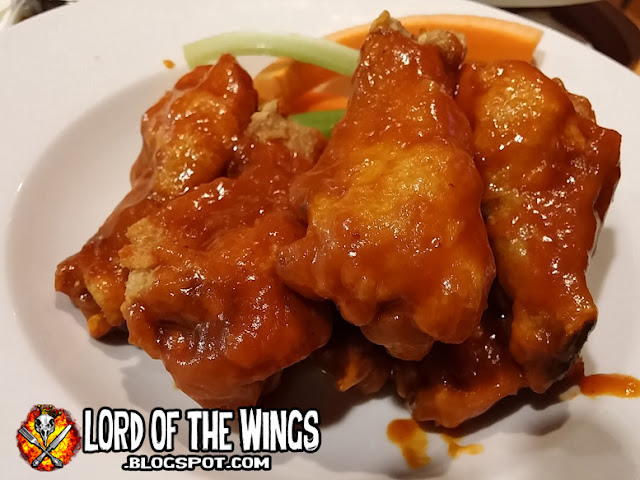 Your going to go on a little adventure trying to find this place, but once you get down in the basement, your going to feel like your at the lodge. The wings are pretty good - crispy skin on not the biggest wings out there. I really like the Hot, Cajun's not bad but weak. Chef's Fab isn't for me, either is Thai. But it's up to you. Either way, there's free popcorn!    8/13 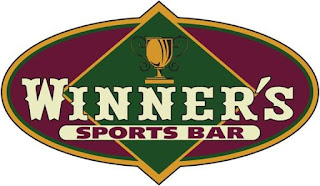 Winners Sports Bar
1515 Vincent Massey Drive, Cornwall ON (Inside the Best Western Hotel)
https://www.facebook.com/Winners.Sports.Bar.Cornwall/
Posted by Lord of the Wings at 10:29 pm