It was week three again in the meal rotation, and wings were back on the menu. No I am not going to do another review, but I will say the wings were extra good tonight in my opinion. So here are some pics of dinner. I feel bad for all of you who don't have access to the caf on nights like tonight. But as Justin pointed out for most of you, the downside to having wings in the caf is that you can't enjoy a beer with them. As for me, I managed with my unlimited coke thank you very much . . . 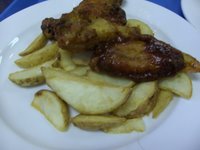 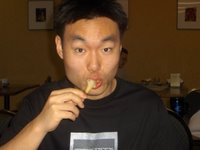 Matt in the middle of a wing 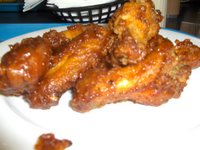 Do they not look breaded and flavoured to near perfection??? 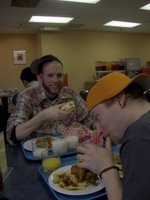 Richard and Justin digging in 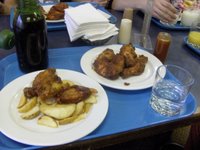 Coke, hot sauce, water for finger dippin, on the left,
regular order,on the right, my request for a 'wack of wings'

Posted by Lord of the Wing at 1:02 am No comments: 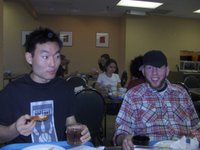 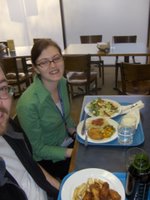 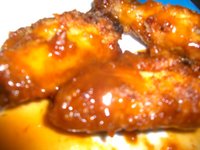 Tasty BBQ Wings with 3rd Degree Up Close and Personal 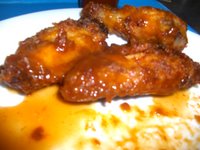 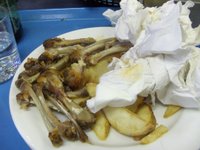 Done and Done (and I mean done!) 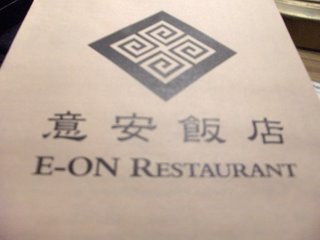 About to embark on a night of editing a video, a late night snack was needed to refuel before work began. Wings seemed to be in order, but my usual late night wing relief place, Al Frescos, was closed, so I went to one of the many Chinese restaurants in my neighborhood of Old China Town for a different wing taste, E-ON. 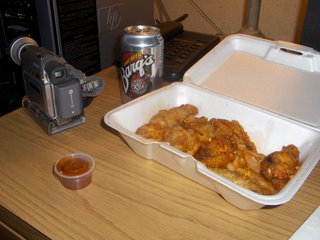 E-ON is a place that is quite hidden amongst the 10-15 Chinese restaurants in a two block radius (seriously, I don't know how they all survive). Its in a basement of a building and it is not open as late as others in the area. However, what drew me to the place is the excellent customer service I get when ever I have gone in the past. Tonight, I was the only patron, sadly, but the waiter I delt with (an older gentleman) was friendly, funny and went all out for my simple take out order of Spicy Wings.

When I looked at the menu, I saw my 2 flavour choices (honey garlic isn't a real wing flavour). Most Chinese places I get the plain wings, often referred to as Jar Doo wings (or other spellings) and add my own hot sauces later. This time, I decided to experiment and try the Spicy. 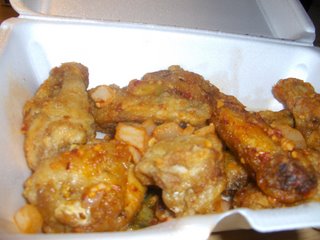 SAUCE CHOICE: plain*(plain wings are $5.95), Honey Garlic/Spicy
SIDES: onion and green pepper??? (see below for explanation)
WETNAP: none
DEEP FRIED, GRILLED, BATTERED: deep fried, then pan fried
WING NIGHT: none, its a Chinese joint
OTHER: friendly service a plus

The Spicy wings are the deep fried wings that are taken out of the frier, then quickly pan fried with onion, green peppers, and chilies with a hint of flavours that I am not entirely familiar with. When I opened the container, I was a little worried by their appearance that they were not going to be good. I was happy that the waiter even put in extra hot sauce ("you like spicy, I will give you 2 extra containers of hot sauce") because I thought I was going to have to douse the wings. However, the hot sauce he gave was one I overindulged in in Hong Kong a few years ago, and can't stomach now (the flavour). Thankfully, these wings turned out to be a nice surprise.

Not overly spicy, these slightly oily but full of flavour wings definitely hit the late night munchy spot. Not overly large, but crunchy, these are obviously not a traditional Buffalo wing. Again, it wasn't hot, so I think the average person would enjoy these. After eating them all I think I might be too full to work on my video now!!!

So if you need a quick wing fix before 11pm, E-ON is the place to go. Oh, and they have damn good hot sour soup here too. 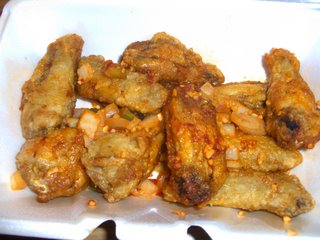 Goodbye, Ruby Tuesday
Who could hang a name on you?
When you change with every new day
Still I'm gonna miss you... 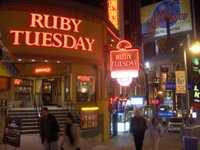 On the Bonsai 6th Floor's 3rd Annual Niagara Falls Trip, I took the opportunity to try the wings at a largely American chain that has little representation in Canada: Ruby Tuesday. Named after the Rolling Stone song, this family eatery is located on Niagara Falls' Clifton Hill; a menagerie of neon lights, wax museums, haunted houses and more Canadian tourist crap than you can shake a stick at.

With the Falls, Ripley's Believe it or Not, and Louise Toussaud's Wax Museum behind us, Diane and I took our tired legs to the largely empty Ruby Tuesday's. 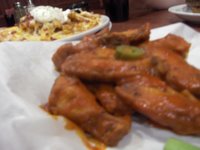 SAUCE CHOICE: Mild or Hot
SIDES: comes with celery and blue cheese dip
WETNAP: NO WETNAPS despite the wetness and stain factor, but lots of napkins
DEEP FRIED, GRILLED, BATTERED: deep fried the ways I like's em
WING NIGHT: none advertised
OTHER: free refills on coke, but at #3.19 a coke, I better get refills!!! 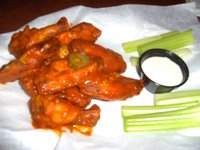 I was a bit worried when I ordered the wing because there was only 2 sauce flavours, and there was only one size option. You might be asking, why is this a potential problem? Well, restaurants that don't do wings well often have this combination, as if wings are an after-thought. But Ruby's was able to deliver.

The sauce was traditional Frank's with butter (heavy on the butter), which was good, but despite the deceptive jalepeno pepper on top, was not hot. I was very happy with the wetness, but as stated abovel, I was not happy about no wetnap as this sauce stains the fingers a deep red. 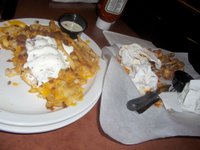 One other big complaint was the price: this place was expensive. I don't know if its the chain, or just the fact that we were in the Tourist Trap capital of North America, but my meal was way too much.

A highlight was one of the side dishes; the cheese fries. The fries on their own were mighty tasty, but these were topped with cheese, bacon, sour cream, and a side of ranch dressing. Diane agreed these were the best part of the meal. Well, I still like the wings. The service was good and as Nee pointed out, our waitress picked up on our subtle hints for service.

I liked the wings at Ruby Tuesday's, but the next time I'm back at the Falls, I will probably check out another eatery on my wing adventures. 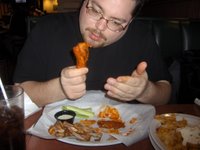 Still, I'm going to miss you

RECIPE: Ricky Patel's "Lets See What Do We Have To Throw In The Bowl" Wings


On another Wing Quest to try new styles of wings, the Fellowship's Ricky Patel forged ahead with a new taste. Lest find out if it worked:

RICKY PATEL'S
"Lets See What Do We Have To Throw In The Bowl" Wings
12 Chicken Wings
The Keg Chicken seasoning Club House
No salt Chicken Seasoning
BBQ sauce
Coke (for fluid)
3rd Degree Hot Sauce
Frank's Red Hot Sauce
Flour
Oil
INSTRUCTIONS:
Pre-heat oven 450 degrees
Mix first 8 ingredients in a bowl
Place bowl mixture on a baking sheet with a good top spray of oil
Bake in oven for 25, turning wings once
Eaten with a side of 3rd Degree Sauce 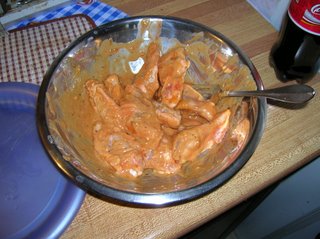 Wings and Mixture in Bowl 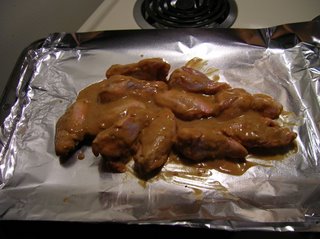 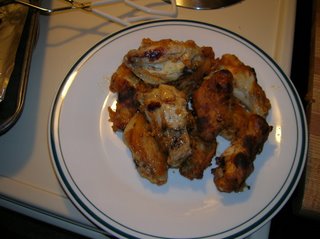 -"it was a good simple wing dinner... for when you
want taste not spice... should be noted that I did dip
the wings afterwards as I was eating in 3rd degree
sauce for a variable spiciness"

-"next time less 'batter', it was kinda thick,

-"they didn't come out very spicy.... I didn't use
enough sauce...but the herb flavour from the
seasonings was good.."

They looked good to me

Posted by Lord of the Wing at 9:58 pm No comments:

~ This Location is now closed: RIP ~ 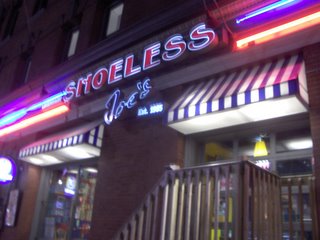 Where you find a sports bar, you generally find wings. Shoeless Joe's fit the bill this night. Found on the outskirts of both the Entertainment District and Chinatown, Shoeless Joes is full of sports memorabilia, tv's, billiard tables. What it was not filled with on this Wednesday night was people. It was dead; and of the 3 sections to be seated in, we got sat in the one with no one in it, in a tiny booth to boot. 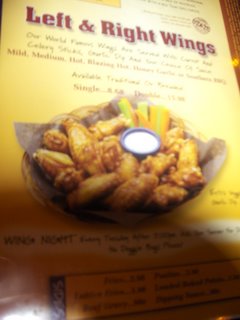 Although this was my second time to SJ's (Super Bowl Sunday, by accident, was the last time), the staff we dealt with this time were friendly, yet strange. And I cannot emphasize how much I detest being told what to order. Although I realize that its logical for a waitress to assume two young guys in a sports bar would want a beer (I didn't) but don't tell me I should order an appetizer of bruschetta, let alone that I should get the all-you-can-eat ribs, because I can make my own decision. I want to be told the specials, I don't want to be told what to order. That being said, the wings were ordered, and they looked beautiful. 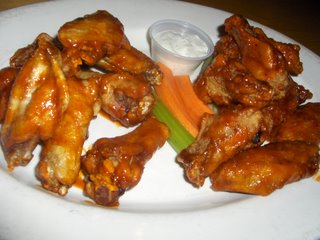 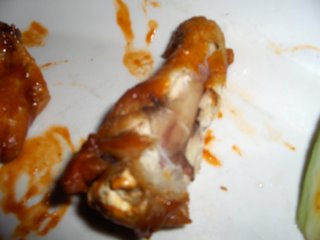 The wings were good here. I ordered a double order, so that I could try half breaded and half traditional. The next time I come back I don't know which I would order next time because I liked them both equally. The sauciness was just right, but the heat was lacking for hot. I didn't order the blazing hot because I had a feeling that hot would have a better flavour. 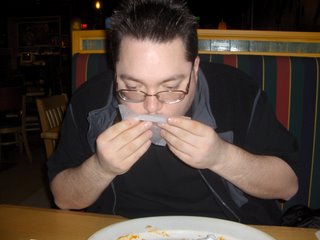 The wings were wet, which I love, and the taste had a hint of bbq in its overall flavour. The wings were pricier than I would like, so next time it will be Tuesday Wing Night for me. Shoeless Joe's menu over-all wasn't too impressive, and nothing aside from the ribs or the lattice fries really struck me as exciting. But I came for the wings and the wetnaps. The atmosphere on a Wednesday didn't do it for me, but the wings did.

Thumbs up on these wings,
(Just for you Ray D!)
Shoeless Joes Restaraunts
401 King St. W (and other locations in the GTA)
shoelessjoes.ca