De-Throned as Lord of the Wings - Bernie Sanders Meme 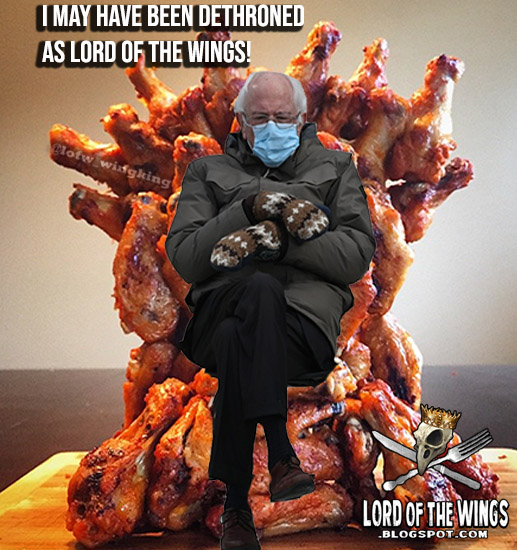 Posted by Lord of the Wings at 3:37 pm No comments:

I recieved for the holidays was a vase of Wing's Hot Chili Sauce.

I love this sauce. You can't buy it in stores & Chinese restauraunts in Ottawa don't use it. So imagine my surprise when my wife sourced a wholesale size box!

I don't even feel guilty not rationing it. pic.twitter.com/W5mjO6XMHl

This was a last minute meal idea by my wife while doing a Costco run. We grabbed the meat, grabbed the pickles. At the grocery store we bought some frozen fries, some coleslaw, and some rye bread.
A quick review:
Schwartz's Smoked Meat (from Costco)
There were 6 packets in the box and we got about 10 individual meals out of this, but I wasn't making stacked sandwiches like Schwartz's does in restaurant. And it's no question this was not anywhere as near good as getting it from the actual restaurant. But it did the trick. One batch I did up was a lot more tougher and did not release well. Price was about $17.
Moishe's Kosher Dills (from Costco)
This was a 2 litre jar of Kosher Dills - these were exactly what you want - SUPER SOUR, salty, and dilly. Crunchy, and pretty big. It was a bit pricey at like $7, but they were good.
We bought the No Name fries because they were like $2 and my wife was hesitant and I should have listened. These were not great at all. We also got Ziggy's Coleslaw, and it was pretty cheap tasting too. Rye bread was good!
It wasn't the real thing, but it was a decent meal for sure.

Posted by Lord of the Wings at 6:30 pm No comments:

A post shared by LORD of the WINGS (@lotw_wingking)

I really can't relay how good this version turned out. Actually I did a second batch and it was even better. Crispy cauliflower, decadent Buffalo sauce. It's not Buffalo Wings, but it's damn good!
Posted by Lord of the Wings at 5:47 pm No comments: 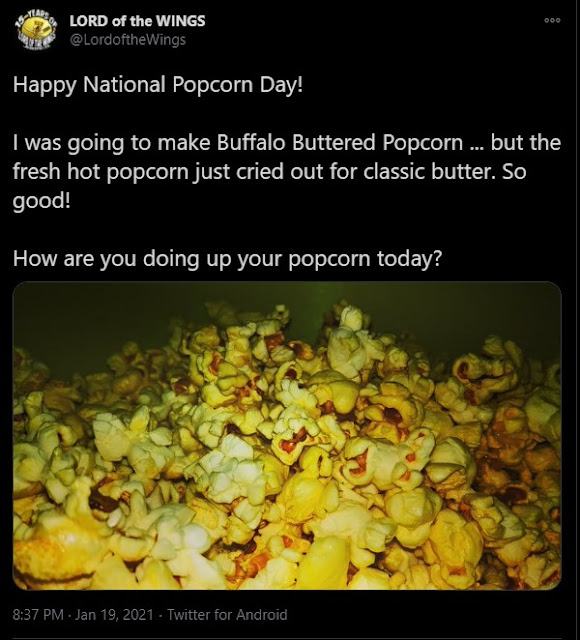 Posted by Lord of the Wings at 3:21 pm No comments: 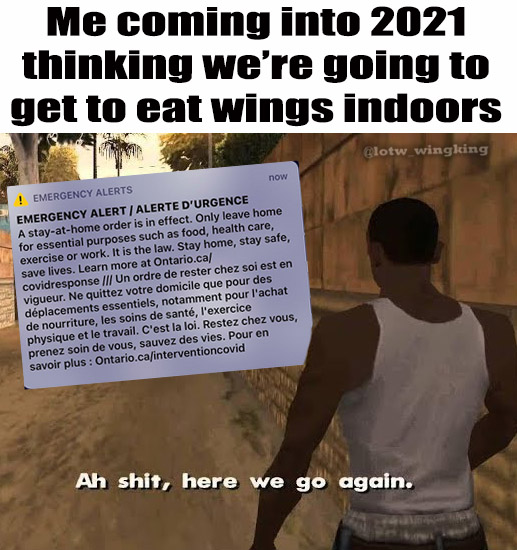 So, here we are in 2021 and things are still not going well. Some people seem to think the calendar change into a new year would some how magically wipe away all the terrible of 2020. But it hasn't.

Here in Ontario where I am, we are on our second Provincial Emergency, and things are in an extended lockdown. We were in one already since December, but now it's longer and a bit more strict. Too many people are still getting COVID and more people are dying. I know I joke about not getting to eat wings, but I do take this pandemic seriously and am seriously pissed off at those that don't. I'm feeling for the front line workers; the emergency workers, the restaurant workers, the grocery store workers, small business owners all who are all out there facing the possibility of getting COVID any day. I also feel for those that are struggling to pay the bills, with mental health, with their safety all because of the pandemic. All because people will not be safe or take the necessary precautions.

Me? I'm doing ok. My family and I are safe and doing well. My day job is shut down (not essential) but I have been busy with all sorts of stuff. For many months I've been not engaged with Lord of the Wings, but I'm hoping that with a continued lock-down into February, I can get back to a) putting up posts from 2020 b) keep on regular posting for 2021 c) keep on keeping on.

What ever happens, I'm hoping you and yours are staying safe.

There's a story to this awesome pizza ... but I'm saving that for a wing review coming soon!
Posted by Lord of the Wings at 6:22 pm No comments:

A post shared by LORD of the WINGS (@lotw_wingking)

Posted by Lord of the Wings at 6:09 pm No comments: 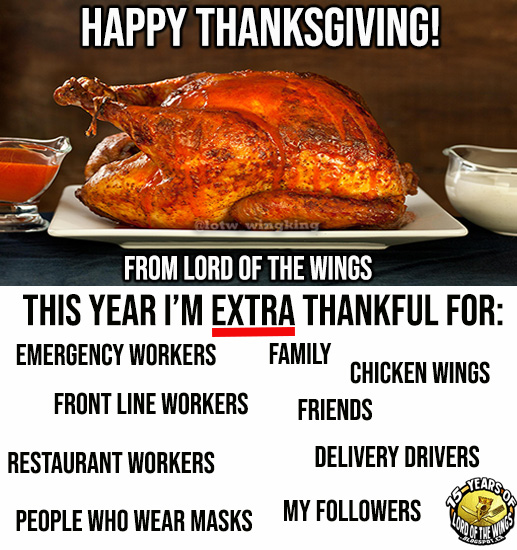 Happy Thanksgiving everyone! We may not get to celebrate they way we used but I hope you and your family are safe, healthy, and well fed.

Thanks to everyone who helps keep us safe, healthy, and well fed to.

Posted by Lord of the Wings at 7:52 pm No comments:

LOTW Meme Monday = I Could Be A Drug Addict ... 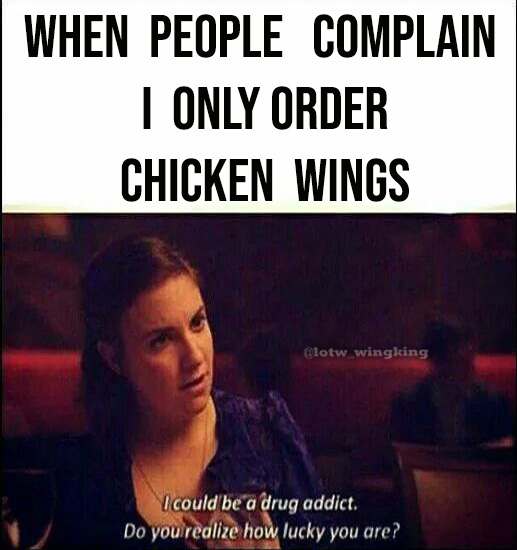 Posted by Lord of the Wings at 9:47 pm No comments:

Yes I did do that. No I'm not proud of myself, but I've had so many burgers at home during the COVID times I needed a change. Mayo, hot sauce, processed cheese slice & Cheetos on a grilled burger.

Posted by Lord of the Wings at 9:33 pm No comments: 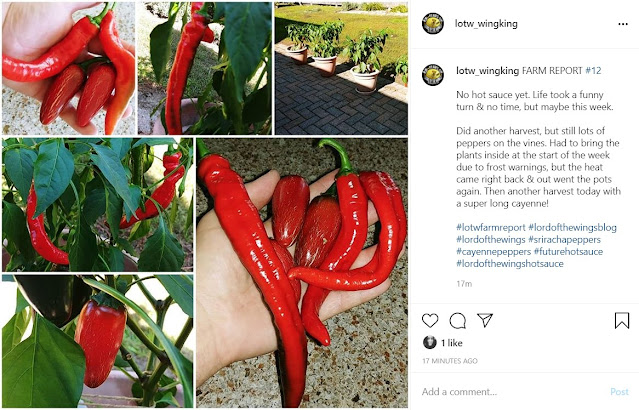 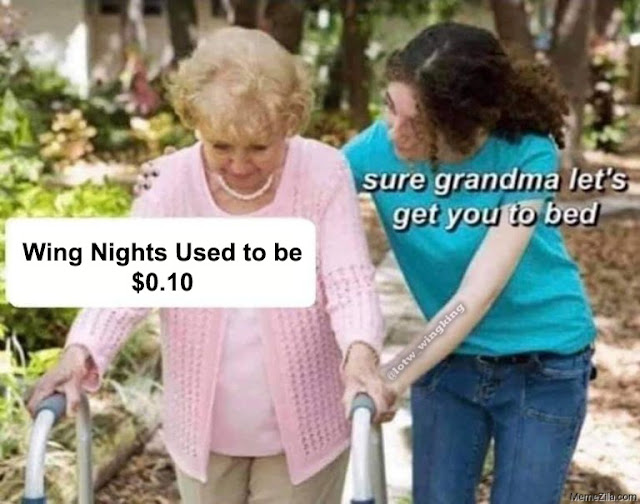 Do remember that? Do you remember wing nights at all?!?!?

Posted by Lord of the Wings at 5:07 pm No comments:

Posted by Lord of the Wings at 5:04 pm No comments:

The grocery store had PC wings on sale a few months back, so I grabbed a box that had the words crunchy and spicy and thought that was the way to go.

As it turns out, I already did a review of these wings back in 2008! Things that were immediately noticeable in change was the box art, that they used to be 1kg, and that they now come with a dipping sauce. The price is still in the same target though! 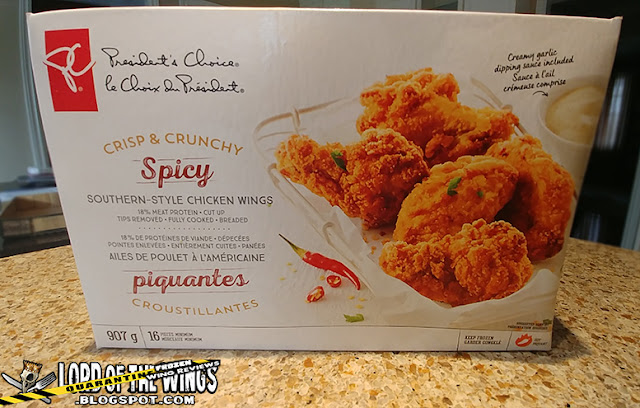 Is this the longest name for a product? "Crips & Crunchy Spicy Southern-Style Chicken Wings". Not having remembered doing a review in 2008, I came at these relatively fresh in perspective. 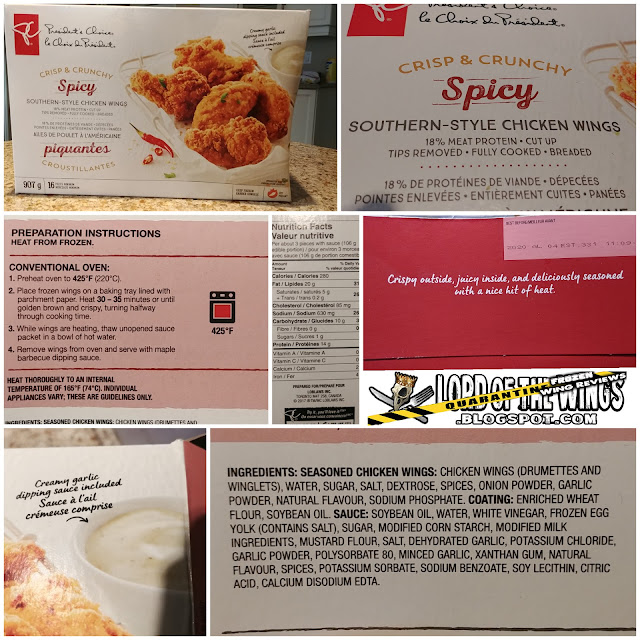 The ingredients on the box actually weren't bad. The chicken was seasoned, the coating was in wheat flour but not a crazy amount.  Could be worse? 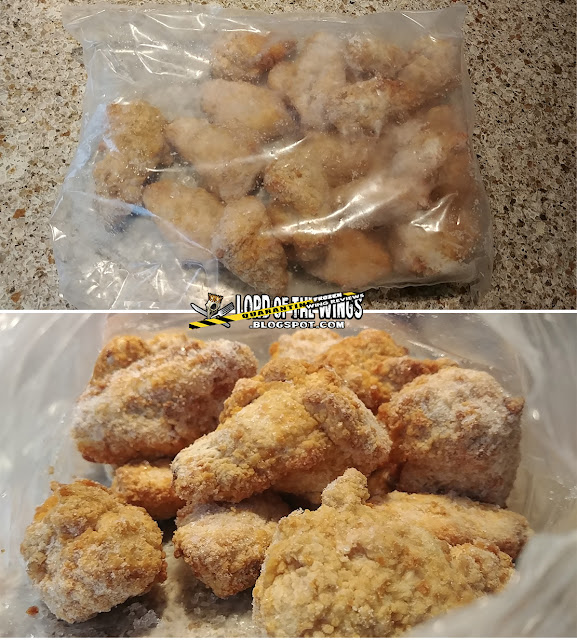 I opened the plastic bag the wings came in, and they looked pretty big. Sightly frost bit, but that's on me I'm pretty sure. 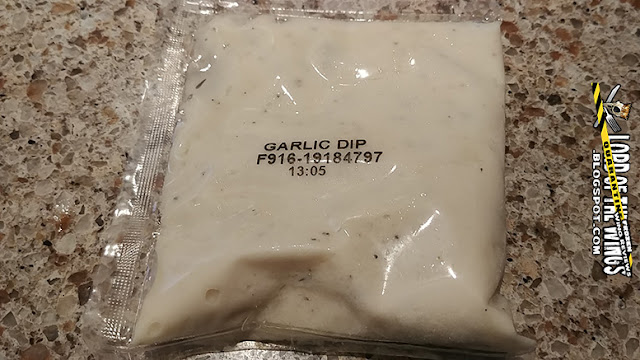 Also in the box was Garlic Dip ... this is not like the usual dips (ranchy, blue cheese) so maybe this one would be worth while. Into warm water it went to thaw. 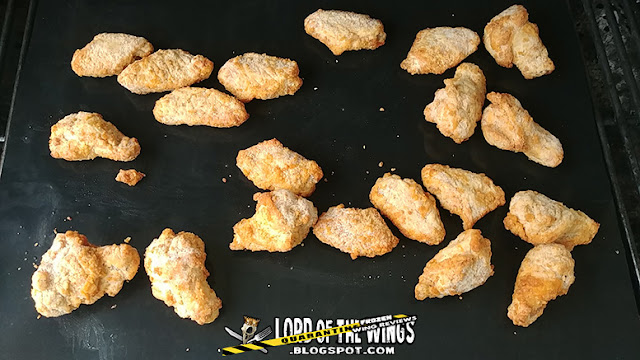 I dumped the bag out and there were 21 wings in total. The box guarantees 16, so 21 seemed like a bonus. 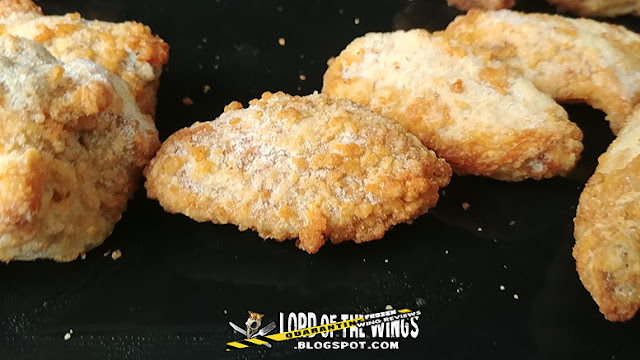 I decided to toss these on the old bbq grill. I used a BBQ mat which I find helps crisp up chicken wings, or in this case, keep them crisp. 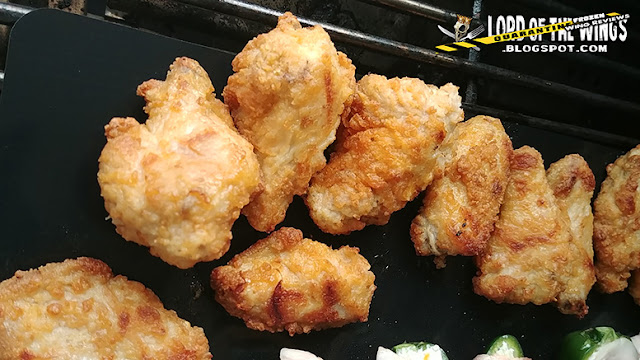 I had the right grill on high and the middle grill on low to cook relatively indirectly. They cooked for about 10-15 minutes on one side till I flipped them over. You can see them getting golden brown and crispy here. You can also see some bacon wrapped jalapenos that I was also cooking. 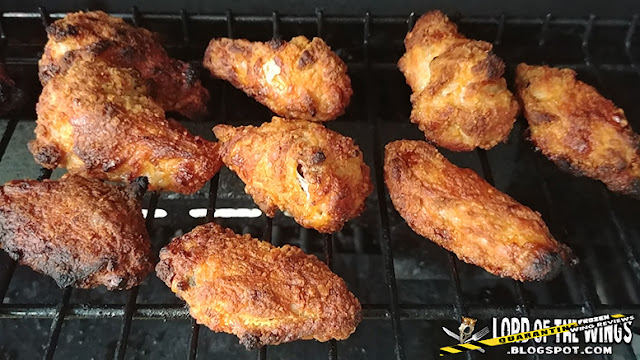 I walked away from the wings, and something bad happened. See I had the bacon wrapped jalapenos cooking on the bbq mat as well, and, well, the bacon grease pooled on the mat. Then it over flowed, and drip down into the flames. It caught fire, and woosh! We had a huge rager, which meant charred bacon, and collateral damage - badly charred wings. Woops. The wings were salvageable. The bacon, not as much. 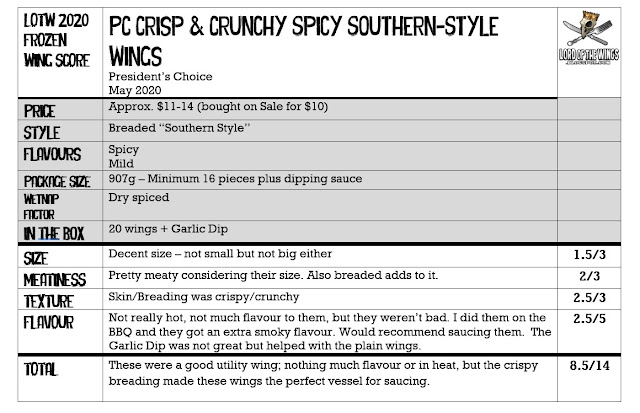 I took the wings off and some were way to black. I still tried scraping them, but those wings were going to be burnt and bitter. Bollox. 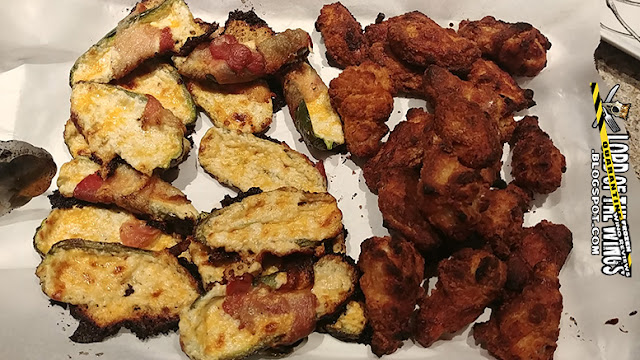 Here was the final product: Bacon Wrapped Jalapenos with almost no bacon, and over cooked frozen breaded chicken wings. 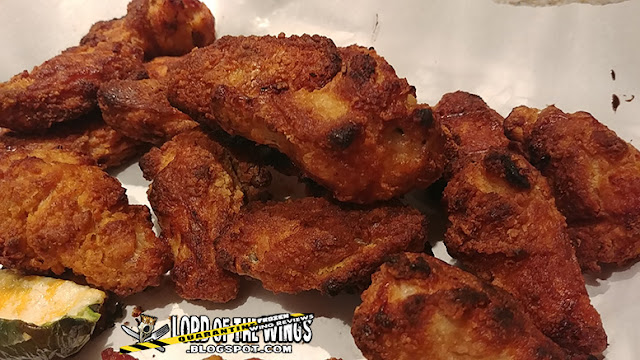 I mean, most were still edible. They were just a lot tougher and hard crunchy rather than lightly crunchy. That's all on me and not PC. 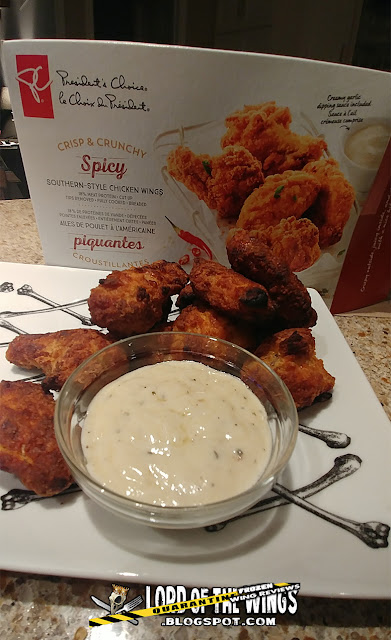 There's a pretty shot of them with some of the lighter ones and the Garlic dip. 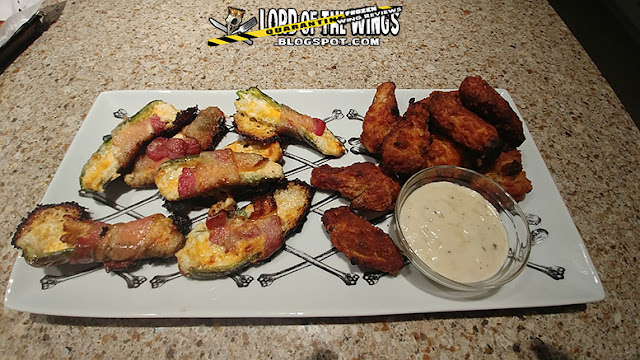 The platter of the best jalapenos and wings for my wife and me. Doesn't look to shabby eh? 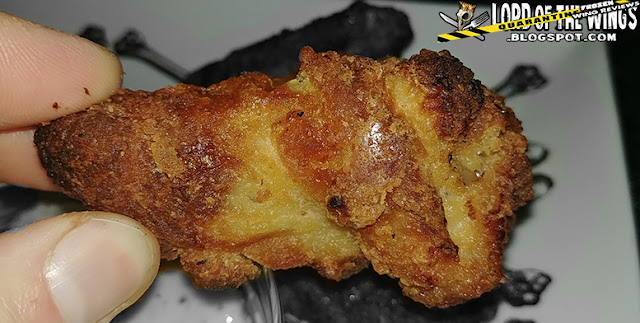 The size of the wings were not huge, but not tiny either. They were also pretty meaty, but there was also a fairly thick breading.  The coating was very crunchy. The meat wasn't too tender either. Again, my bad on cooking. 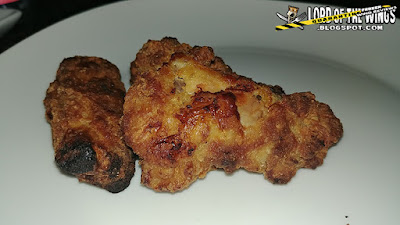 I mean, they weren't pretty looking, that's for sure. Again, that's mostly on me and my grilling negligence. They didn't have much flavour to them - maybe I burnt it off? There was a bit of smoke flavour from me cooking them on the grill, but that's it.  The name says spicy but there was no spice. Even with my mistakes, I wouldn't eat these naked. They are a great vessel for saucing or dipping. 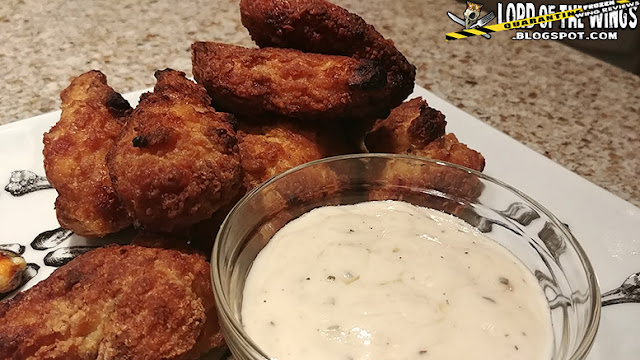 I was hesitant to try the dip, because PC may make some decent wings, but dips are just not that good. I wish they put in an extra wing instead of the dips. 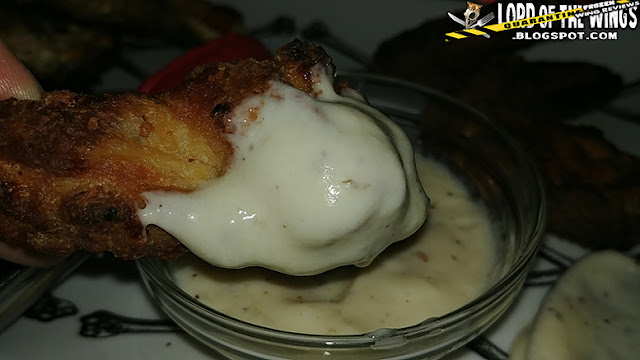 This dip wasn't that bad. It helped with the plain flavoured wings. I didn't love it either. The texture is kinda weird after thawing. Still, it's creamy and garlicky, it did what it was supposed to do, I guess. I'd rather use my own dips though. 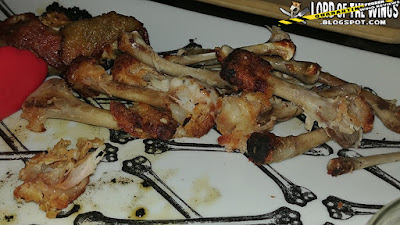 Would I buy it again?
Ya probably. Not for the flavour, because it was pretty blah, but because these are a pretty good crispy canvass for sauces and dips. Disappointed in the lack of heat especially, but I can get past it. I do recommend cooking them on the grill, just never leave bacon unattended on the grill. Ever. Ever. Ever.
8.5/14

President's Choice
https://www.presidentschoice.ca/product/pc-crisp-and-crunchy-spicy-southern-style-chicken-wings/20708933_EA
Posted by Lord of the Wings at 8:56 pm No comments: