One of the first days I was out exploring the city was LJ's neck of the woods in the West end. I had seen several locations advertising wings, but when I came across a place called The Foolish Chicken, I figured, they have to know chicken. 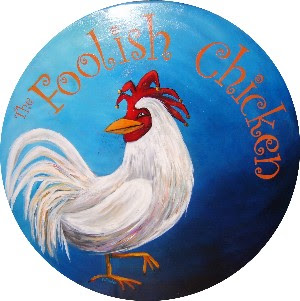 I stopped in this former home now transformed into a little eatery. It was late in the afternoon and the place was empty, save for what looked like a husband and wife owner-duo and their two kids just arrived home from school. The wife took my order, but it was the husband who delivered it. 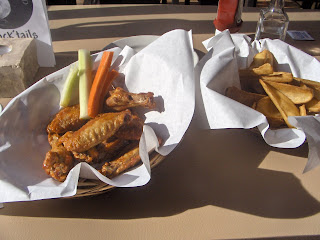 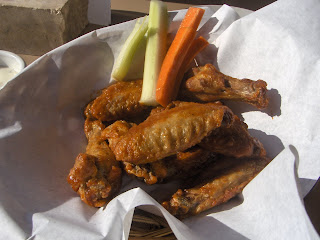 I was really disappointed with the score when it came out. Its low, and that's not quite right because these were decent wings. The chicken was cooked to perfection - crispy, crunchy and juicy inside. The sauce is a big problem though. Not only was there no heat, there was very little sauce. And it was pretty weak in flavour. I didn't hate these wings, I was just sad at the output. Clearly, rotisserie chicken is their focus.

I also ordered a side of fries. I do not know how to describe these wedge-like fries, only that they were crispy, but very blah. Liberal amounts of vinegar, ketchup and salt were a must. 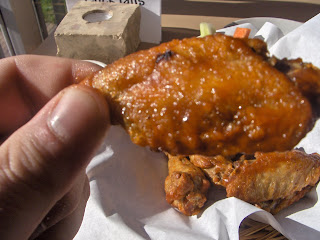 Final Score: The owners were very friendly. At one point, I had asked where to buy transit day passes. He wasn't too sure and asked were I was from. I told him I was from a small town near London. "Tillsonburg?" he asked me, shocked at such a bull's eye guess, I told him yes and he told me he grew up in London as a kid before coming to London. Wow, small world. Mediocre wings. This was another place where I really wanted the wings to be amazing. I also felt bad about the lack of customers. The food is decent, and the place is cozy. So check it out, but maybe the wings aren't the way to go. 18.5/35 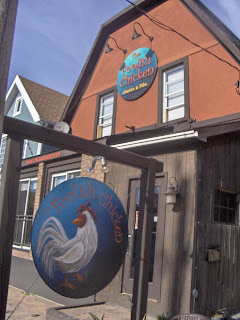 Posted by Lord of the Wing at 5:35 pm No comments:

Hey! Remember me? The Wing King? The Lord of the Wings Blog?
Well a wing review has been sorely overdue. On another adventure out in the great province of Ontario, for the past 3 weeks I found myself in the nation's capital, Ottawa. 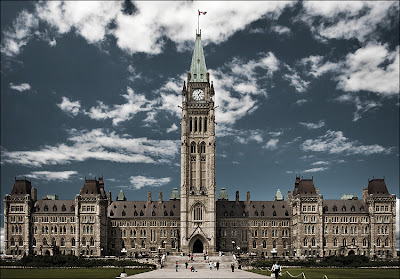 I was here to visit LJ; but in the mean time when she wasn't working, I was out exploring Parliament, graveyards and of course wings. I've been without internet that would allow me to upload photos, so here come a few reviews.

The Honest Lawyer: been there, done that, don't want the t-shirt
Overall, Ottawa's offering of wings was relatively dissapointing, but there is still lots of places to check out.
Posted by Lord of the Wing at 5:34 pm No comments: 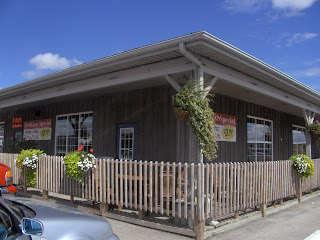 Bramanda had to bring Starbuck in to get, well, neutered. The good news was that they were free for a day without worrying about getting back on time, not being able to leave the dog in the car etc. They picked me up after dropping him off, and eventually we made our way to Aylmer Ontario. We went to a few childhood stops Amanda used to make, but we made our way to a little eatery that isn't from her childhood, but they claimed, served up some good food - Ruby's Cookhouse. 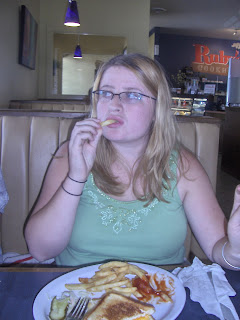 Amanda went with one of her staples - grilled cheese. It looked thick with cheese and tasty, but as she mentioned how she wanted something small so she could enjoy one of the many homemade cakes - settling on a delish looking chocolate cheese cake. 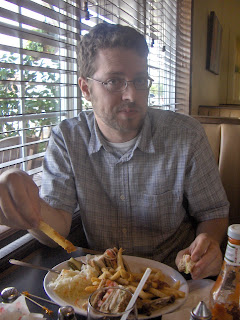 Brad went with a diner classic: the clubhouse. Turkey, bacon and deliciousness on 3 slices of bread. "You just can't screw up a club sandwich," he said, pretty much ensuring a good meal.

While entering the establishment I was keen on something like a club sandwich, but I saw wings, and well, you know how it went. 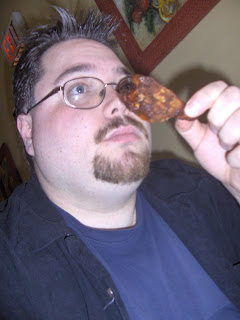 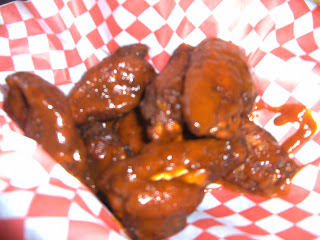 Bramanda quickly asked - so how are they? To which I replied, interesting. These wings are breaded, and it felt like the sauce was baked into the chicken. The flavour of the wings were like some sort of bbq infused with heat of some sort, but it didn't really taste like BBQ. However, they weren't really hot either. The sauce was tasty - but it was the seasoning on the chicken that was less good.

They lied to begin with on their menu - describing the wings as jumbo - which they were not. They weren't small, but they certainly weren't jumbo. The mix of spices on the wing tasted almost burnt in some respects, but mainly gave just a strong flavour, that isn't necessarily good. Not bad, but not good either. This coating definitely made them crunchy, but not in a way I really liked. 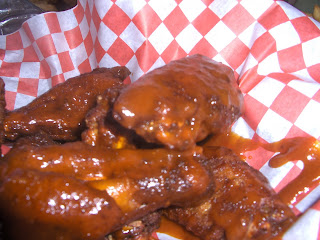 FINAL SCORE: Ruby's has a friendly, country atmosphere. Their country style food is great. Their foray into the world of wings, is not, unfortunately. Their strange attempt at a unique wing just isn't worth recommending. And considering there were no sides, no heat and no jumbo, I just can't really recommend these wings. But it wasn't nearly as sad as poor Starbuck. 19/35 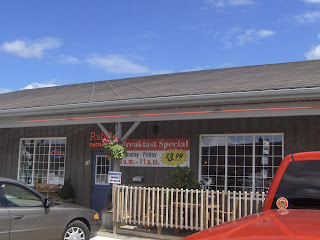 Neustadt Ontario. I had never heard of it either. Why might it be famous? Prime Minister John Diefenbaker was born there. Located North of the 401, East of London, West of Woodstock, this time little community was founded by German immigrants who tried to recreate a European village in Canada. 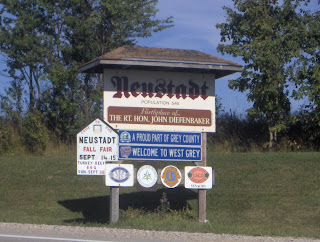 Mr Pankratz and myself went specifically to a shop that was at one time an old mill. In the basement of the mill was tunnels. When we enquired about the purpose of the tunnel, the proprietress said it was from smuggling alcohol from the next door brewery during prohibition, and that tunnels connected to all the local hotels. We headed over to the brewery, which we thought doubled as a restaurant, but found out from the sign on the front door: "we are not a restaurant or a pub. We only sell alcohol". They told us about 3 restaurants to try out in Neustadt: one was just a greasy spoon, another Noah's, was a pricey upscale affair. The third, was a local tavern that served wings and had a garlic bread to die for. 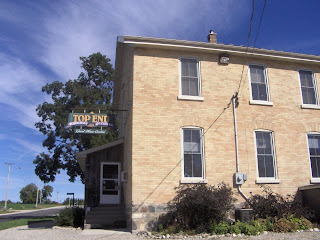 In this small village, we actually got lost trying to find the Top End. An old house converted into a tavern, the Top End refers to its location in Neustadt, not to its high class profile. The furniture is early 90's, the decor is a hanging motorcycle, and a stage that doubles for live bands or karaoke. It's not pretty, but you can bet this place is jumping on a Friday or Saturday night. 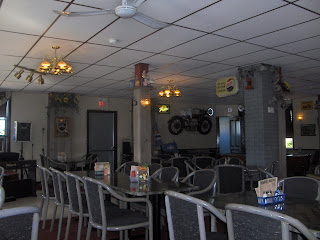 Of course, we weren't there for music or atmosphere - we were just hungry, and I was looking forward to some wings. 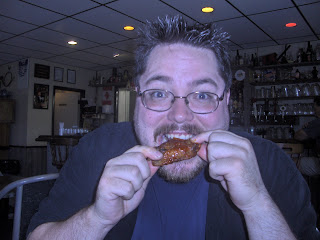 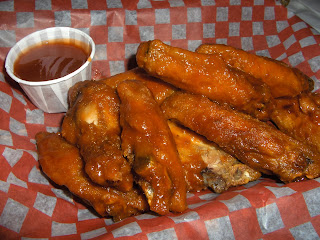 I was pleasantly surprised by these wings. They were saucy, crispy and tasty. The size were big, close to jumbo. Everyone felt like a meal in its own. There was a nice dusting which gave a nice crunch to every bite. 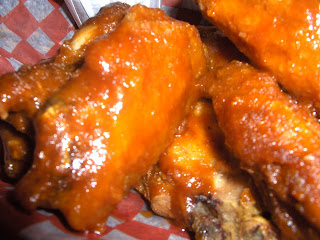 The sauce was also nice. The hot had a nice nip to it, and the flavour was not simple butter and Frank's. I want to say it had a tomato hint, but it wasn't tomato. I have a hard time differentiating flavours and ingredients. All I know was that it had a nice, thick texture to it. And it was good. On the side I tried their inferno, and our good friend 3rd Degree made another appearance. 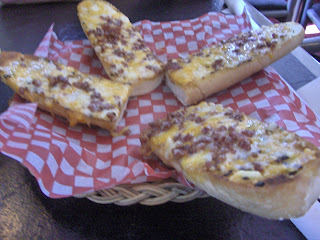 We also took the advice of the woman at Neustadt Brewery about the garlic bread, getting it fully loaded with cheese and bacon. It was good, but I'm pretty sure the bread had been frozen and the bacon was just bacon bits, but it was tasty. 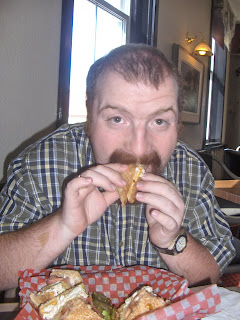 Mr Pankratz went with the Club sandwich, and it sure looked good. They used chopped roasted chicken instead of shaved loaf, and real meaty strips of bacon. A good choice to go with for sure. 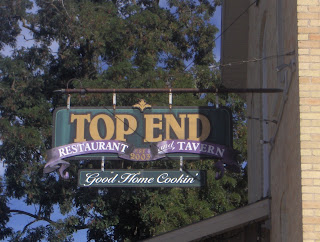 FINAL SCORE: Outside was a patio with picnic tables, but the inside was much more comfortable with its air conditioning. The wings came with a wing bowl, but our drinks were pretty watered down with ice. Service was friendly, and most importantly, the food was good. While the pricing was odd, and wing night isn't huge savings, these big wings are pretty good. Its doubtful you'll ever be 'in the area' but head north of Stratford for these tasty wings. Click HERE to see some crazy finds antiquing. 21.5/35 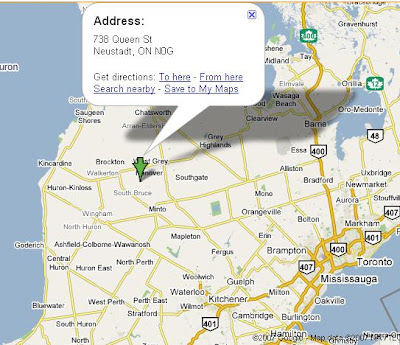 I don't remember how I came across "The Pioneer Woman Cooks" blog - but today I think I know why I linked her to my blog.

This was sent by Ricky to me concerning the Labour Day Weekend, National Buffalo Wing Festival in Buffalo New York. One day I will make it to this celebration of wings. I think the wing eating competition would make me cry, so many half eaten wings gone to waste!

BUFFALO, N.Y. (AP) -
When it comes to wolfing wings, Sonya Thomas is a wiz.
The 105-pound competitive eater who goes by "The Black Widow" bested a dozen beefy rivals Saturday night, scarfing 173 wings in 12 minutes to win the wing-eating contest at the National Buffalo Wing Festival. "That's 5.17 pounds of wings," said Brian Kahle, spokesman for the annual Labour Day weekend event in the city where Buffalo wings were born. Thomas, 40, of Alexandria, Va., also held the festival's previous record of 161 wings in 12 minutes, set in 2004. "She's the crowd favourite," Kahle said. "It was 12 huge guys and her." 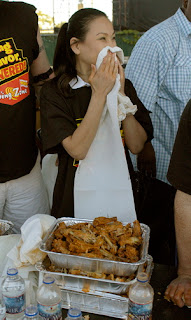 Thomas has set numerous records in competitive eating events, including 37 hot dogs in 12 minutes; 35 bratwursts in 10 minutes; 11 pounds of cheesecake in 9 minutes; 44 lobsters in 12 minutes; and 250 Tater Tots in five minutes. She is ranked No. 5 by the International Federation of Competitive Eating. According to the federation's website, No. 1-ranked Joey Chestnut holds the 12-minute record for chicken wings, downing 7.5 pounds of them May 21.

Sonya Thomas
Posted by Lord of the Wing at 11:08 pm No comments: