Guess who was back? You guessed it, Dude.

Down from Ottawa, sporting glasses and a beard and on a bit of a vacation, he and I went to the movies, played NHL 94 and of course, went for food. By Thursday night we were in the mood for some pub food, something not close to home.

We were headed for the Queen's Quay to check out one of the many pubs, when I got my streetcar/bus connections mixed up. Getting off at the wrong stop, I noticed another pub, Betty's, which I had seen positively reviewed HERE, and Dude and I decided to stop in. 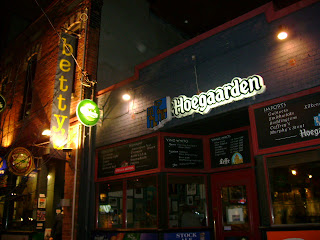 We went to the door and looked inside: it was packed. We hesitated to go in, but some woman at the second entrance yelled that it was good and we should check it out. That little encouragement got us in the door and on a hunt for seats. We found a high table in a second room.

The crowd was a mix from business suits, students and slightly older than us casuals. It was loud but not deafening, and everyone was pretty friendly. The decor of the place was coffee house meets bar. Betty's was something different and turned out to be exactly what we were looking for. We looked over the short but tasty looking menu, with Dude going for the chicken pot pie and I, well, you know. 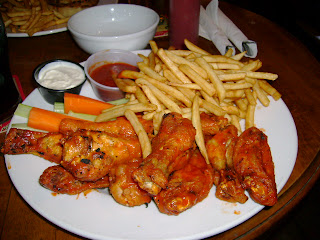 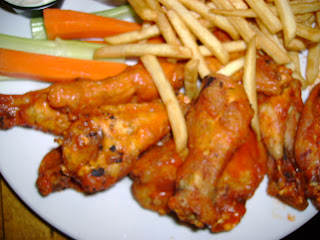 I was VERY happy with Betty's wings. Just about everything about them was done well. First, they were large and in charge. The skin was perfectly crispy, with a nice crunch when bitten and a juicy meaty inside that says these wings were cooked just right. The fact that they grill these wings after is very interesting, although I don't know how this act added to the wings, but the grill marks looked good. 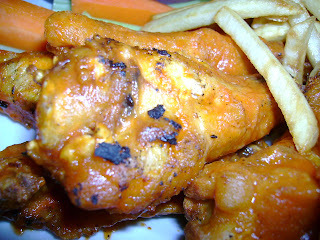 The wings were ordered hot with a side of suicide. The hot sauce was pretty mild, but the Buffalo sauce aroma and flavour was bang on. Suicide was hotter (it should be called hot) and not as bad tasting as other places, but when I used it I felt like I was ruining the original sauce on them already.

What was also great about these wings were what they came with. Excellent cuts of celery and carrot that had a mayo-sour cream dip. The dip was ok, but I would prefer ranch or blue cheese - but kudos for trying something different. This plate also came with shoestring fries - a great addition - but the fries were a bit blah (thankfully I had suicide to dip in!) 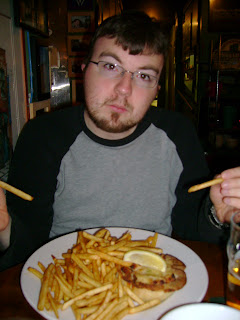 Dude went with his traditional 'old man food' ordering the chicken pot pie. He said he enjoyed the pie, what little pie there was. To compensate for the small pie, his plate was overflowing with fries. 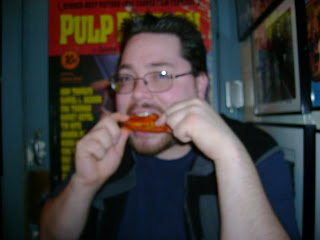 FINAL SCORE: great wings in almost all respects - pricier than I like, but with these jumbo flappers and all the sides, its worth it. If only they had a wing night. Or were closer to where I live. 28/35.

As for Dude, hope we will get to go out again before you head to Asia. Good luck getting chicken pot pie there!

While updating the old blog tonight, I happened to be watching the food network where a show I occasionally watch, Unwrapped came on. Each week, Unwrapped uncovers behind-the-scenes details on classic American food, from peanut butter and chocolate syrup to French fries and bubblegum. Host Marc Summers, who might be best remembered when he hosted Double Dare.

Tonight's episode was entitled "ATOMIC" and was all about spicy food. Now wings didn't make it on the explanation list, a lot of great material was covered. 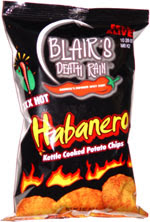 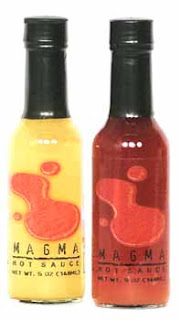 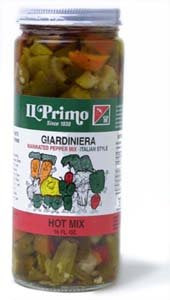 Check out the American site for information on the episode and the Canadian Food Network to see when the episode will be back on again.
Posted by Lord of the Wing at 2:30 am No comments:

This past weekend I was visited by Amanda, who was down for the HRPAO Conference here in Toronto (apparently the second largest HR conference in the world!).

The first night she was down we went to Mr Green Jeans at the Eaton Centre. No wings were involved (I had terrible wings there many times before and stopped) and we both concurred to NEVER go to Green Jeans again. I have said this before when the waiter spilled sauce all over me the last time I was there, and we watched another waiter spill wine, beer and some cocktails on some guy this time.
Thursday we hit a food court, but by Friday night, Brad was down and I wanted to do a little cooking for my friends. 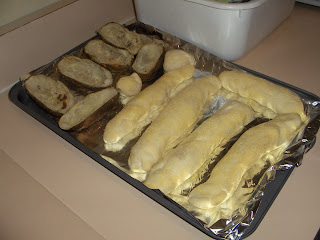 Step one was a lot of prep work. I had 5 things on the menu this night: breaded and unbreaded Buffalo wings, potato skins, pizza sticks, dill-mashed potatoes and Gator Tails.

For the Pizza Sticks, I used fresh pizza dough that I pulled out into rectangles, filled with mozzarella cheese and garlic powder, rolled them up, then tossed them in cornmeal and more garlic powder. Baked for 10-15 minutes and then dipped in pizza sauce, they were the faves of the guests. 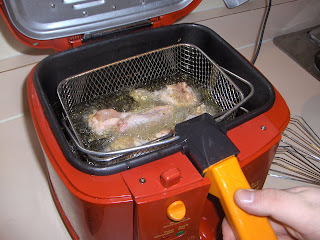 For the breaded wings, I dipped them in egg then rolled them in Italian bread crumbs. Into the deep fryer and they were ready in no time. After which I sauced them with my traditional Buffalo wing sauce, but I also got a chance to try out a new hot sauce: WING-TIME
super hot. 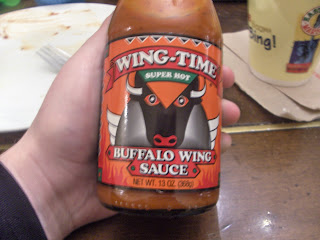 It has a rich buttery flavour, but don't think it doesn't have a bite. There is a quick punch, almost a spike of heat that stays in the mouth. 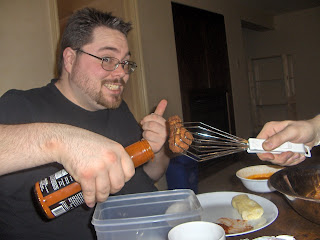 Its made with, in order: "Hot Sauce (cayenne peppers, vinegar, salt) Soybean Oil, Tomato Paste, Water, Habanero Peppers, Spices [what that is, who knows?] Red Chile Peppers, Salt, Xanthan Gum (natural thickener) Natural Butter Flavour. I was surprised because the spice is not at the first of the ingredients, but the heat makes its way fast. Its a very thick sauce, as advent by the Tomato Paste before the water. 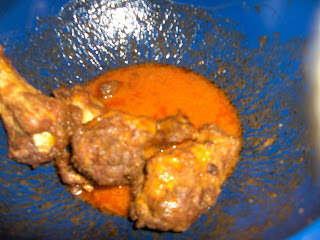 Its good, but it is not a sauce that I would want to eat a lot of wings in. Something about it doesn't sit right with me, and it is not the pain. 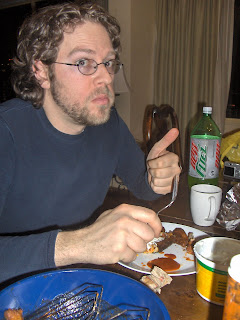 Brad and I agreed the traditional Buffalo wing sauce was much better. The breading on the wings turned out ok (they were lightly breaded, so it didn't overwhelm the wing). 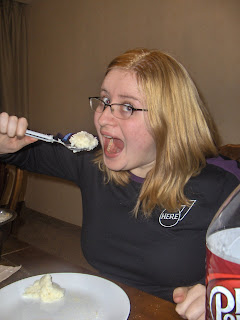 Above, you can see Amanda digging in to the dilly mashed potatoes. I scooped out the potato from the skins, then added sour cream and dill weed all mashed together. I wanted it to be creamy smooth, but I didn't whip it long enough. I also didn't feel the dill was strong enough, but then again, I loved my dill. 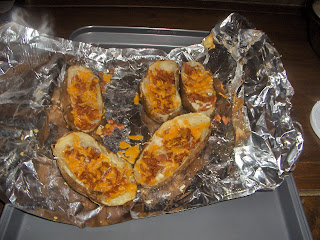 The Potato Skins are one of my own favourite wing side dishes, and I'm quite happy with my version. Take some baking/russet potatoes, rub them in oil and kosher salt (I only every cook with kosher salt). Bake them for an hour (turning once). Remove and cut in half. The skins should be nice and crispy: scoop out the insides leaving a shell. Fill with cheese, onion and bacon (I cheated here and used bacon bits, but normally I prefer cook/chopped bacon). Bake again until cheese is melted. So good. 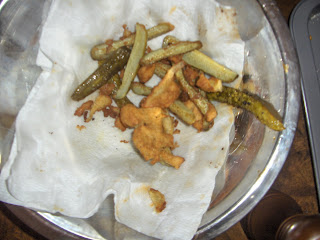 Finally, I attempted to make Deep Fried Pickles. Instead, they turned out to what Amanda branded as Gator Tails. I followed a recipe on the Internet roughly that said to used eggs and bread crumbs etc. into a paste, but the paste would not stick to the pickles that I had cut up into spears. I tried to coat them as best I could before dropping them in the deep fryer but it turned into a mess. The batter was all-right, the pickle was good, but if it had stuck together it would have been great. Or decent anyway. We will try again, hopefully with better results next time.

The rest of the evening was spent recovering from fullness, playing Halo 2 and just enjoying the company that Bramanda always bring with them.

Posted by Lord of the Wing at 1:35 am No comments: 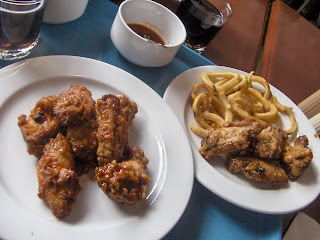 Welcome back to Part X of a XX part series, 'Better Know a Chestnut Wing'

On tonight's blog, we are in THREAT DOWN mode. Once again, the sweetanistas have embolden the terrorists by bringing back Honey Garlic wings.

Wing Nation, we are under attack. These Honey Garlic extremists are trying to destroy all that we hold true in a wing. They are undermining our wing way of life and they might just not stop with wings. 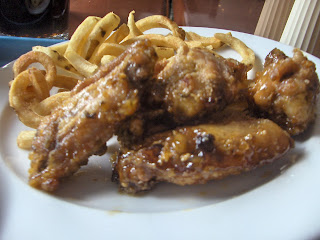 Like any good newsman, I believe that if you're not scared, I'm not doing my job. We have to be aware of the enemy and how persuasive it can be. To best understand the enemy, I tried one. I know, I know, I know what your thinking: Wing King, have you defected? No Wing Nation, I took one of the Devil's own wing and tried it to better understand what I was truly up against.
I bit into one: I had a letter-bomb of sugar blow up in my mouth. Sticky and venomy, I almost cried at the waste of such a wing. But what the Honey Garlic extremists didn't know was that I was prepared for such an attack. They fell right into my trap. 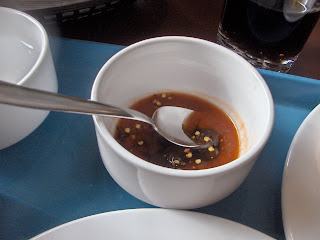 Yes, I brought back up: home-made hot sauce. In a bowl I mixed the spiciest condiments available at the counter: Tabasco sauce, chili flakes, Red Rooster hot sauce (a Vietnamese hot sauce I don't know the name of), Trinidadian hot sauce as well as Worcestershire and HP sauce for some flavour. Mixed and spread over the wings, the Honey Garlic Insurgency was quickly defeated. 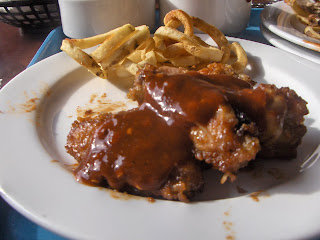 It was bold: spicy in burn both immediately and in after affect, but it also had flavour. I had worried that the kitchen-sink approach to sauces might fail miserably but victory was ours this day. 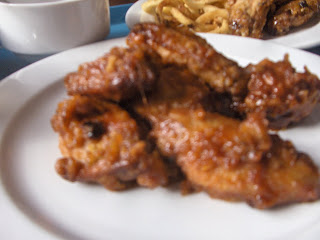 Also available on order to combat the Honey Garlic bad guys was BBQ wings. Now granted, they were not as good as the Wednesday night BBQ wings, but they were the best alternative out there the average citizen had open to them. 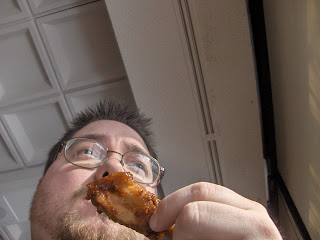 We must soldier on. If we stop eating spicy, flavourful wings - we are letting the terrorists win. Keep up the good fight.