Last week I went to see Logan, and it was awesome. 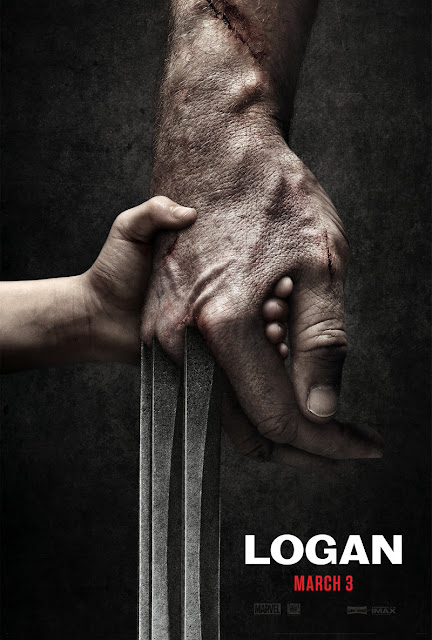 If you haven't seen it, it is excellent. Hugh Jackman and Patrick Stewart are at the top of their games and new comer Dafne Keen keeps her own. Action galore, humour and Johnny Cash. I did have some timeline issues with the movie, but suffice it to say, if you like X-Men, go see this. 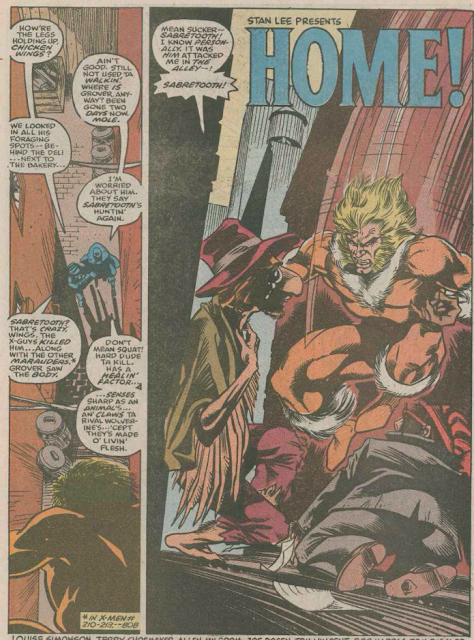 He only exists in one comic, X-Factor#51 (February, 1990) and, well he dies. We don't know much about him other than he is a Morlock, and he kinda looks like a bird.

What are his powers? We don't know - we don`t really know much about him. He's a pretty pathetic individual who is hunted down by Sabretooth and first has his arm/wing ripped off, and then later is killed.

Ok so unless you are a hardcore X-Men fan, you`ve never heard of him, and you are not going to find an action figure of Chicken Wings. Oh wait . . . 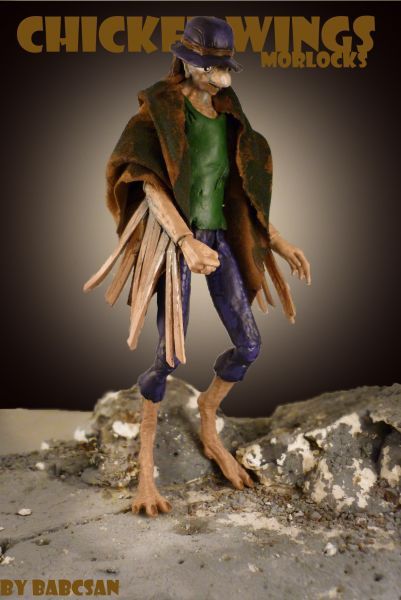 You can get a custom made action figure of Chicken Wings.


So not the coolest X-Man, but hey, we live in a wacky world. I like chicken wings, I like X-Men, but I don`t love Chicken Wings. Here`s the old cartoon intro and a Logan trailer to make up for it:

This might just be an Ottawa thing, but why in this day and age would you order sour cream as a wing dip when you could have blue cheese, ranch, or dill dip? 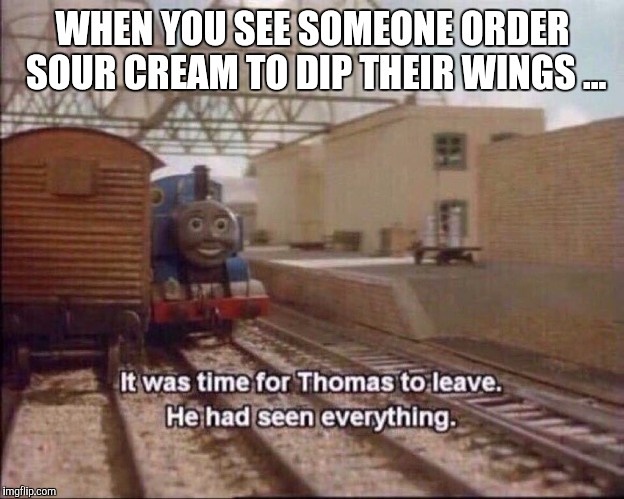 Posted by Lord of the Wings at 8:15 pm No comments:

"International Women's Day (March 8) is a global day celebrating the social, economic, cultural and political achievements of women. The day also marks a call to action for accelerating gender parity."


I want to write something poignant, motivational and witty about this topic, but really it's simple: women are awesome.

I can't say it enough and I know I am thankful for all the women in my life. So to celebrate today and in conjuncture with WWWWWW we are taking a look at 3 women who have contributed to Chicken Wing Culture in some way or another: 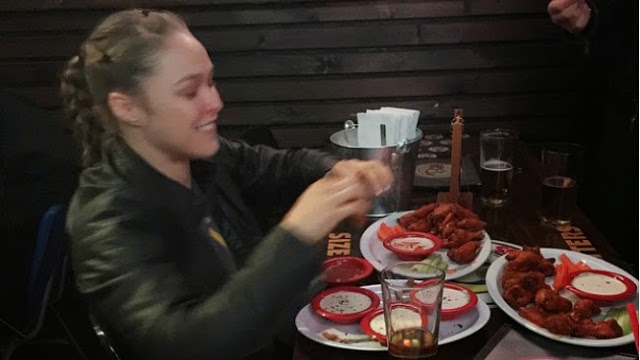 Rousey is an Olympic medal winner, UFC mixed martial artist and movie actress who is known for being one tough lady. She's been ranked as both the most "dominant" active athlete and "Best Female Athlete Ever."  She also loves chicken wings and loves talking about them. I don't think another athlete has been so open and documented about their love of chicken wings! 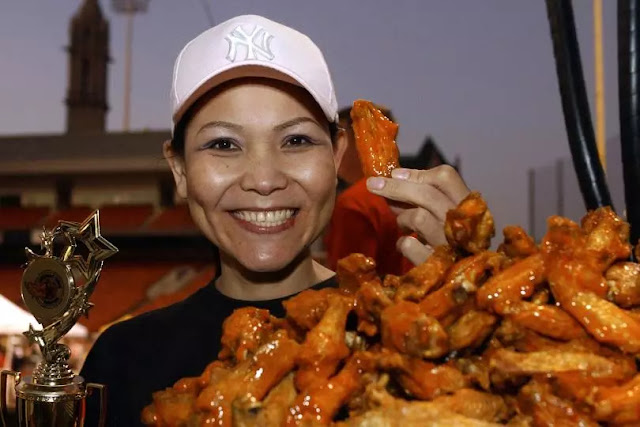 Sonya Thomas is a competitive eater, know as both "The Black Widow" and "The Leader of the 4 Horseman of the Apocolypse" who has broken over 39 world records. This 98 lb woman from South Korea hit the world by storm by eating more and eating faster than all of her competitors. Her fame came from eating chicken wings, and in 2011 at the National Buffalo Wing Festival she beat her own record and ate 183 wings in 12 minutes! 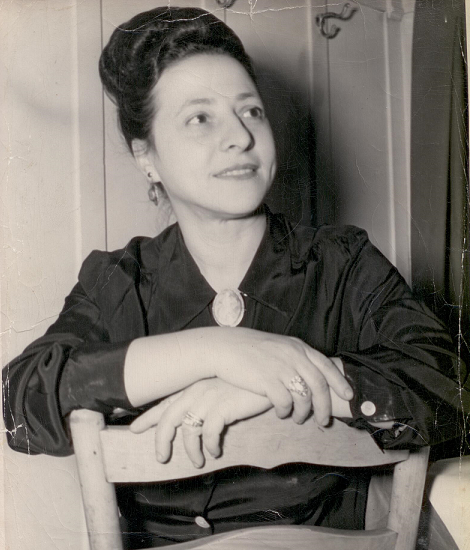 The mother of the Buffalo Wing. Without her, the city of Buffalo would be obscure, Superbowls would only serve ok foods, and there would be no Lord of the Wings. In 1964 on March 4th (only a few days ago!) Bellissimo was just trying to feed her son's hungry friends who came to visit at the Anchor Bar in Buffalo NY.  She deep fried some chicken usually destined for the stock pot, whipped up a hot sauce, and the rest is history. 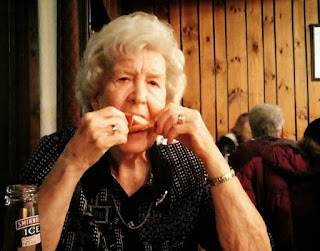 My Grandmother and matriarch of the family. This is her eating wings, not knowing I was taking a photo of her. She's an amazing cook and baker, and influenced my dad in his cooking, who influenced me to be a good cook. Thanks Gramma!


BONUS #2: How to Eat Chicken Wings Like a Lady


I'd love to hear more about women and chicken wings - is there a wing loving woman that inspires you? Let me know in the comments, e-mail or twitter!

Posted by Lord of the Wings at 3:09 pm No comments: 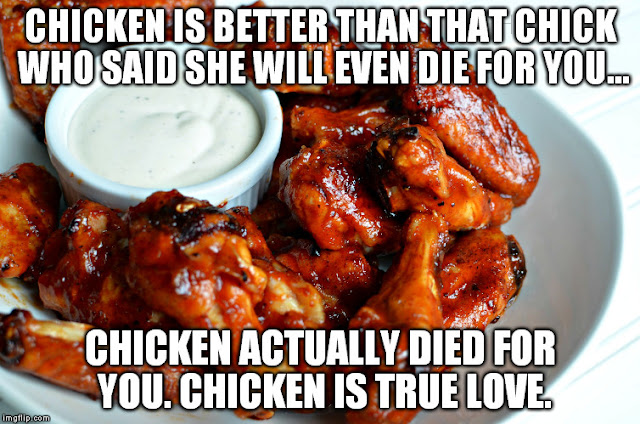 I love you chicken wings . . . forever and always!
Posted by Lord of the Wings at 1:31 pm No comments: 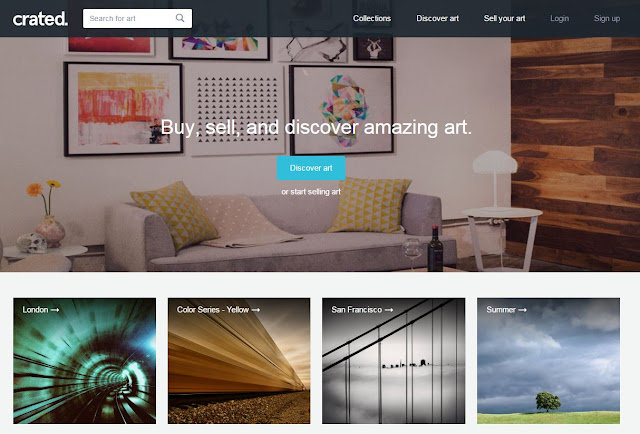 Crated is a website where artists, creators and developers display their art to be sold to you. Their mission statement:

"Our goal is to be remarkable. Think big. Really big. Then think bigger."

What brought me to Crated was artist Ricko. There's no info on him, but here is his art: 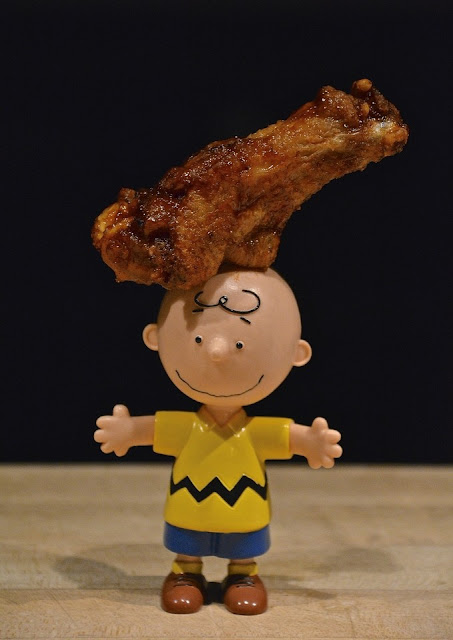 This is an action figure of Charlie Brown balancing a chicken wing on his head. It's called "Charlie Brown Demonstrates the Art of Balancing a Buffalo Chicken Wing on One's Head." For $101 USD this can be yours. I don't know the significance or the story behind it . . . 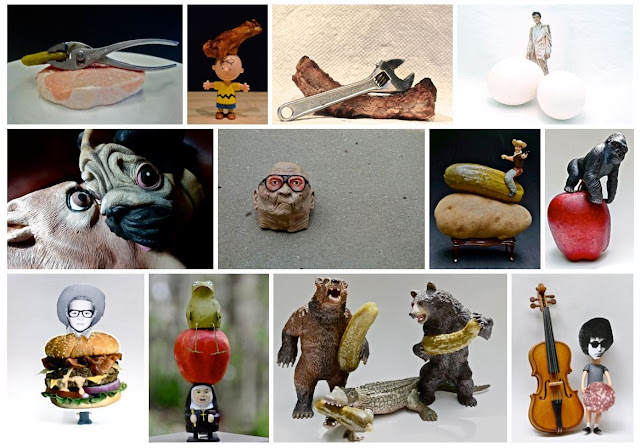 Ricko (who has no bio data) seems to enjoy the juxtaposition of food and objects. I personally like the bears, alligators and pickles. But Charlie Brown is my personal preference.

Have you used Crated before? What's your favourite piece from Ricko? Why is Charlie Brown balancing a chicken wing on his head?!?!?!
Posted by Lord of the Wings at 9:48 pm No comments: 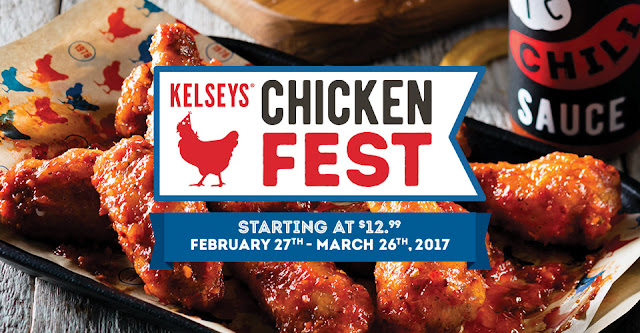 If you like Kelseys and you like chicken, Kelseys Chicken Fest might be for you. From Feb 27-March 26 2017 they have some special dishes for you to try out. I have not tried any and some things sound interesting, I've got some questions.

Of course, chicken wings was the first thing I looked for on the menu. 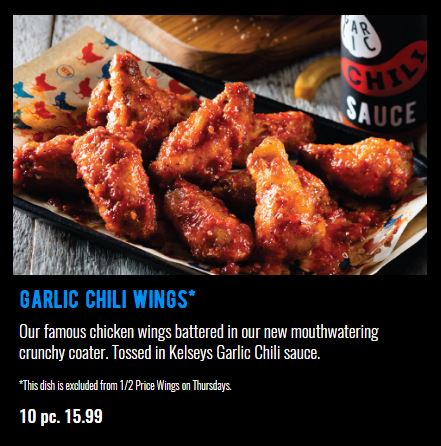 Is there a new wing flavour? Yes, Garlic Chili wings. I won't lie, the flavour doesn't excite me. I mean it sounds good, but just ok.

I'm calling BS on the little asterix that says you can't order this flavour on 1/2 price Thursdays. At $16 for only 10 wings, that's also BS! If it was a complicated recipe or a really unique wing but garlic chili? 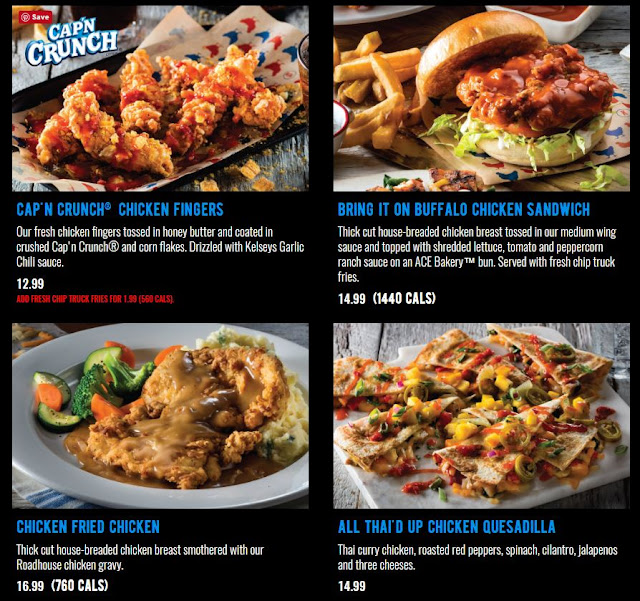 Also sticking out - CAPTAIN CRUNCH CHICKEN FINGERS. This is out of the box thinking Kelseys! (If this was done to the wings, I would get the surcharge!). AND they drizzle it with garlic chili sauce in the end anyways.

Also of note to this blog is the "Bring It On Buffalo Chicken Sandwich" - sounds pretty tasty! 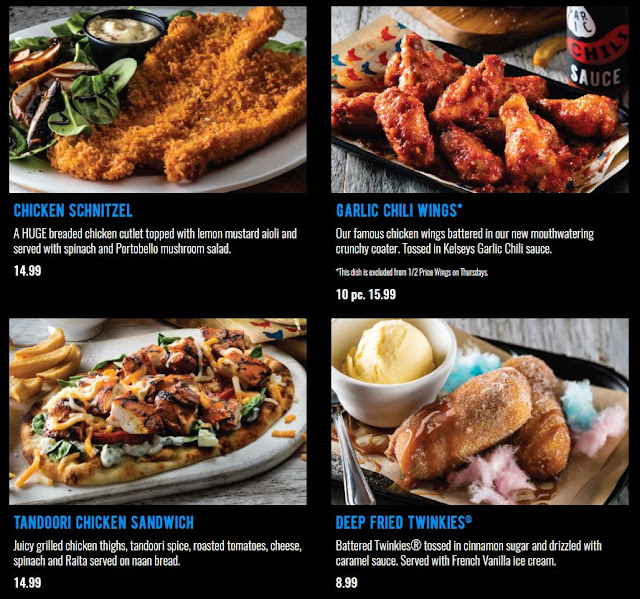 Deep Fried Twinkies also sounds good; question is, where is the chicken? All of the dishes have chicken; this one doesn't for sometime. 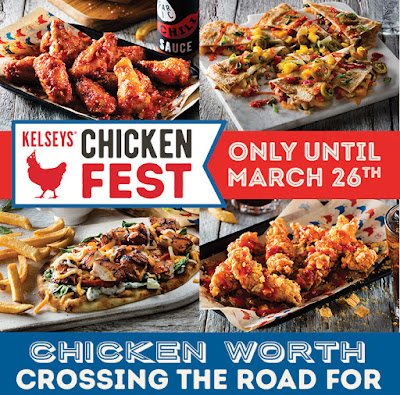 While I'm questioning things, when did Kelseys become a "Road House" and not "Friendly Neighborhood Bar & Grill" ? Or what I really mean (because I know when), why? Just simple marketing? What's going on here?


So is this "Fest" exciting enough for you to try? What do you think about the wings? Do you know why they are "Original Roadhouse" now?  I have more questions than answers these days . . .