Lord of the Wings Wedding & Wings: A 1 Year Anniversary Retrospective

Having the title of Lord of the Wings comes with certain expectations; that you will like spicy food, you will order chicken wings anytime possible ... and if your going to get married, you will have chicken wings at your wedding. Well, we did, and it was great. 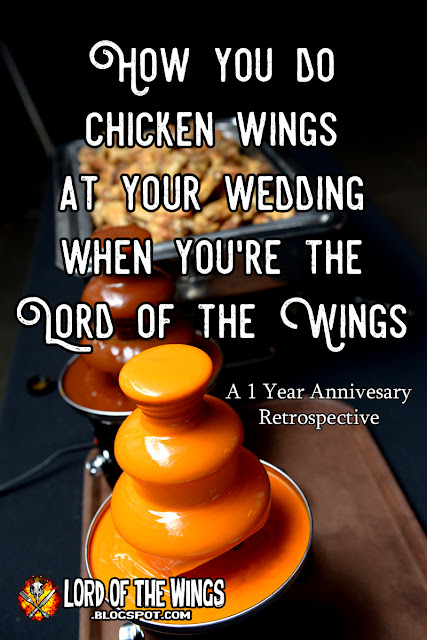 1 Year ago, I married the love of my life after a very long courting period, and it was the happiest day of my life. It also involved a lot of chicken wings, but my bride-to-be knew what she was getting into, and she did everything to make my dreams come true (wing and otherwise).

We knew we were going to integrate chicken wings into our wedding (no it was not the theme) but exactly how, we weren't sure. Ok that's not true, we knew for a long time that we would have a Chicken Wing Fountain. Wait, you've never heard of a chicken wing fountain? You know where you dip chicken wings into a fountain flowing with wing sauce - like a chocolate fountain - only 10 times more awesome!

When we booked our vendor, it was the most important question I had, if we could do this at our post-dinner buffet. The coordinator was blown away and had never heard of such a thing, but she was excited and said they would get on board to make it happen. We hit a little snag when she left a few months later on leave and a new coordinator said they could do the chicken, but the fountains we would have to look into ourselves.

I researched online and found NOTHING about chicken wing sauce fountains other than a few pictures, but no how-to's or instruction guides. So I took the plunge, bought 2 fountains online and went to a restaurant supply store to buy some jugs of hot sauce to test this concept out. I mean if people can do nacho cheese, why not wings?! 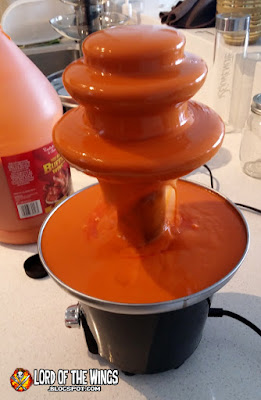 The test was a success!!!  I was using a President's Choice Buffalo Wing Sauce (something that would be tasty for all palates) which is a little thick, but it worked. I also got a BBQ sauce (for those that don't like 'hot') and it took some finessing with some vinegar to thin it out because it was a little too thick, but I finally got it to the consistency that it flowed from the top with ease.

Clean up was pretty easy - I expected this to be a massive mess - but as long as I drained the sauce (that was a bit messy) the equipment was disassembled and washed with ease. 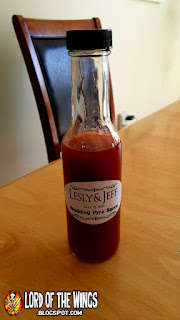 I also got several 3.5 litre bottles of 3rd Degree hot sauce that would go as part of our give-aways at the end of the night. I designed some labels and with a short assembly line of fiancee and father-in-law-to-be, we got over 100 of these little bottles filled up.

For our wedding rehearsal dinner for our wedding party, we had looked at many restaurants, caterers and even considered doing our own bbq (boy did we not have time to do that!) but to keep it to a reasonable price and availability it was really not working out. In the end, we booked the party room in my apartment building (which walks out to the garden/courtyard). It was a little chaotic with our group finding my building, then getting everyone in, but once the food arrived, everyone was good to start eating. 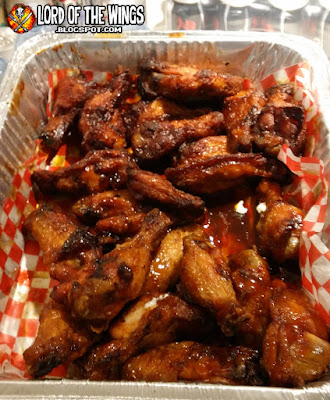 For food, we went with Pig Out BBQ on Spadina Street in Toronto; they gave us a great deal, delivered the food and got us some great grub. One of the dishes was of course, smoked wings in a sweet smokey BBQ sauce. They were a big hit, but then, so was all of the food that night (pulled pork, ribs, salads, mac & cheese etc). There was so much food and some very happy, full tummies afterward. We were super happy with this vendor. 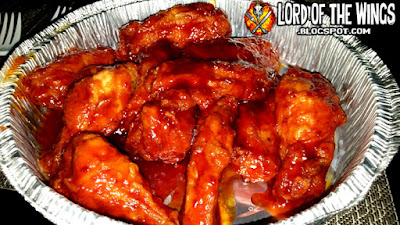 Our rehearsal was on a Thursday night to make it less hectic the night before our Saturday wedding. For Friday dinner we went with one of our favourite Chinese restaurants from our undergrad, New Ho King. But I got something I had never had (or knew they had) before: General Tso chicken wings. My favourite General Tso chicken is from here, and the fact they had them on wings was amazing. I did a pick up and they were a bit cold by the time I ate them, but that sticky, sweet, spicy flavour was there and I couldn't believe I was having wings again!

The wedding went pretty smoothly with few hiccups and great weather. A beautiful ceremony, fun entertainment, and lots of food and lots of booze; everyone seemed to have a great time. It was good to see all of the planning, time, and money paying off for such a great party. 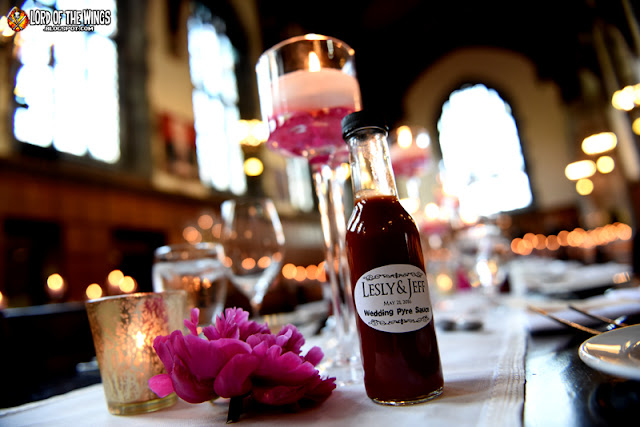 Our venue was the Great Hall in Hart House, a student centre at the University of Toronto (where we met) but think of the place as Harry Potter-esque rather than student centre. Before dinner there was an oyster bar, antipasto, and a bunch of fancy appetizers being served. For dinner, we had multiple courses including roasted butternut squash soup, buffalo mozzarella/tomato salad, squid ink pasta, and duo of beef & chicken entrees. There was lots to eat and people seemed quite happy with the meal (we didn't get much time to eat, but from what I tasted, it was very good). After that it was cake cutting and everyone had our wedding cake for desert.

As mentioned, on the tables were take-aways of our "Wedding Pyre Sauce" - some spicy 3rd Degree hot sauce that I still get compliments on to this day. Some used it that night, others saved it for home. Some even pirated extra bottles from other tables! 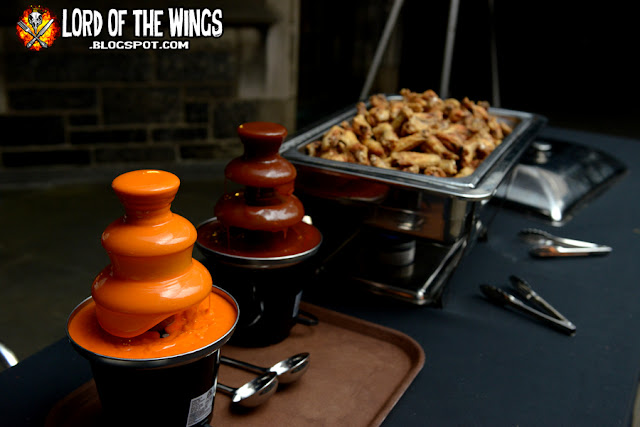 The dinner course went a bit longer in time than expected, so when people came out after dinner,speeches, and a bhangra dance performance, they found late night food stations set up with even more food; a candy table, a poutine bar, beef sliders, and cotton candy on a stick. But THE food station that stood by far was our chicken wing fountains. 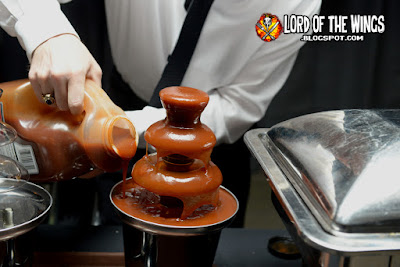 The venue could not run this station (only provide chicken wings), so I hired one of my student staff from work to come, set up, sauce and serve at the fountains. Mike did a great job and even got the fountains to run better than I did in the test runs! 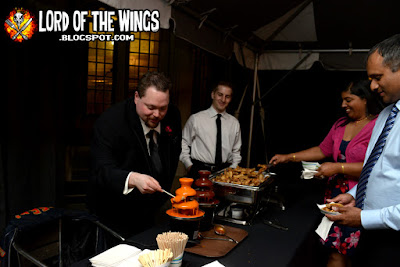 I was busy . . . talking to people, or getting pictures taken (who knows it was so busy), but as soon as I could I was out in the courtyard making sure the fountains were up and running! 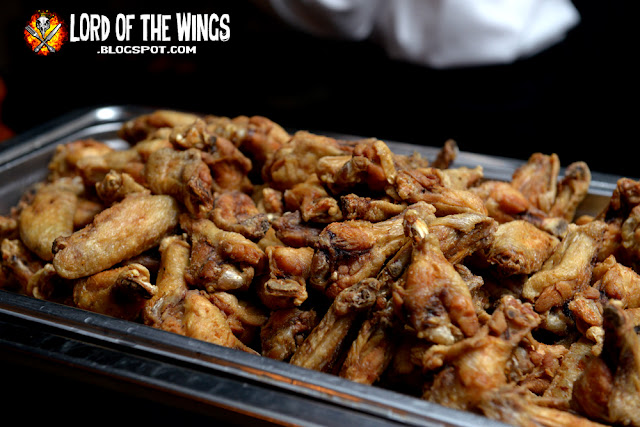 When I talked to the venue, they said they could do the wings with no issue. My big request was that the wings be fried, not baked. I know baked wings are easier for catering, and I've had them before and they don't turn out the best. Well these fried wings were amazing. I could have eaten these crispy, salty wonders just on their own. I couldn't tell you how happy I was they turned out so well. 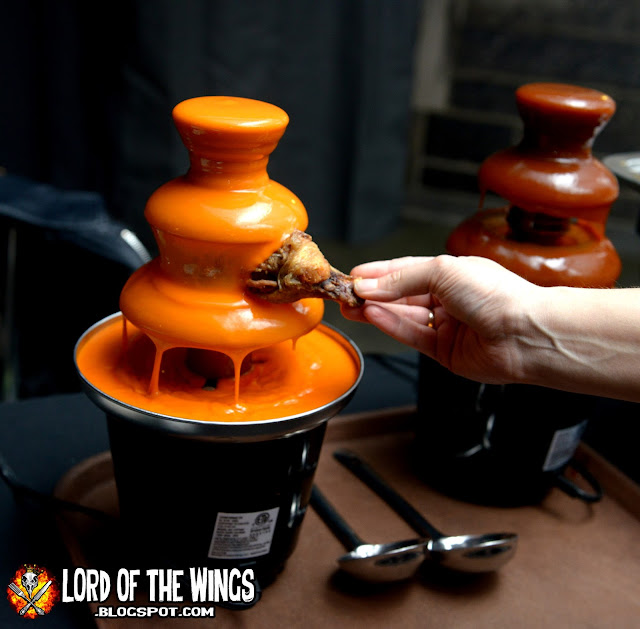 The fountains were a novelty and entertainment on their own. So many people commented how they had never seen anything like it and that it was so appropriate because of me. People came out saying they were stuffed from dinner, but that didn't stop the wings from all being eaten! 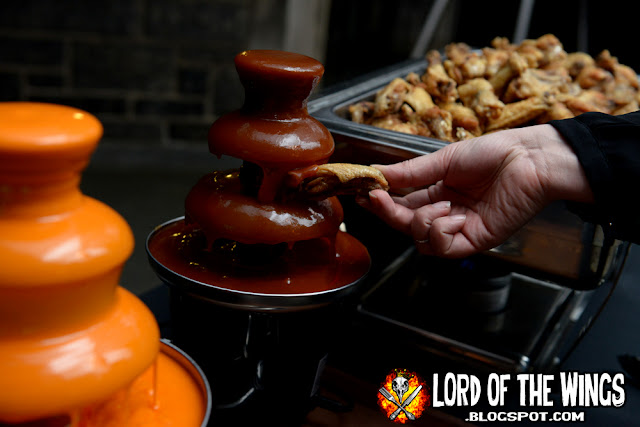 There were skewers and tongs for people to dip, but some couldn't wait and did hand dips! The two sauces worked well, but the Buffalo sauce was the more popular of the two. If I was to do it differently, I would maybe have done a ranch fountain instead of the BBQ. 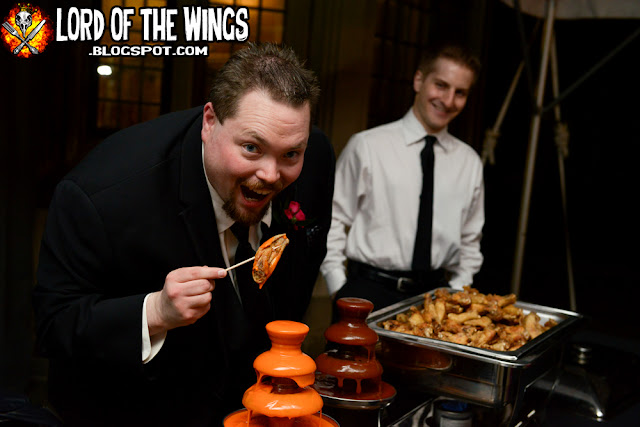 I gotta say, I was very happy how these turned out. I also had to work very hard to not spill on my tux and I'm proud to say I stayed sauce free!

Sunday was a chill out day as well as some clean up, but then it was all night packing and getting ready for our honeymoon. Monday we were off early morning and flight bound for a beatiful resort in Costa Rica.

The resort was quite remote, so it was a long van ride through back country, but when we arrived, the place was paradise. We got to our honeymoon suite and we were starving. We were also exhausted, so we decided to order room service. Low and behold, what did I see on the menu? Buffalo chicken wings. 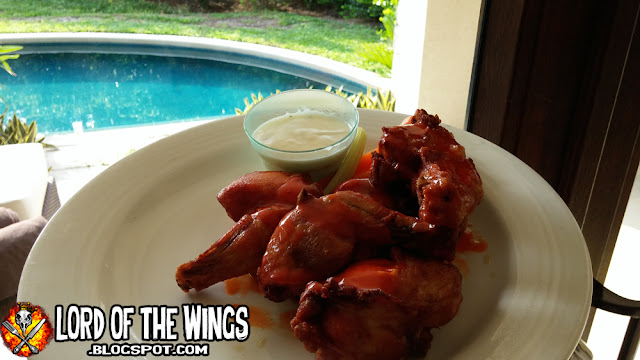 The wings looked amazing. The cut of the chicken was weird (like the drummets had large chunks of the scappula meat on them) - the meat was a bit tough, but the sauce was a nice mild Buffalo sauce. What a way to start a vacation! 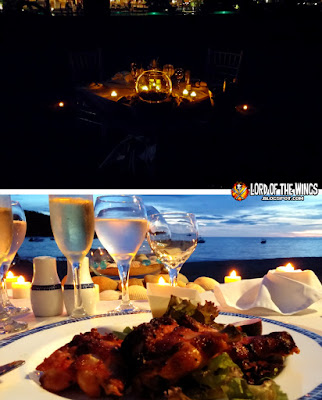 The resort also organized a romantic dinner on the beach later in the week. Guess what was on THAT menu? Buffalo wings. These weren't as good (or as Buffalo-ized) as my first meal, but hey, I wasn't expecting wings at all! 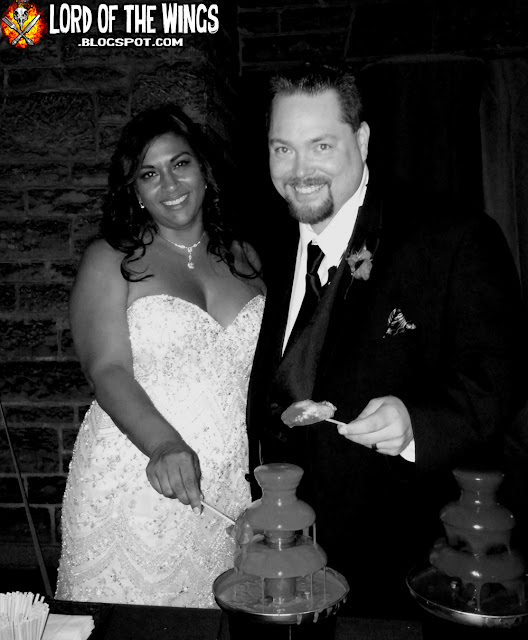 So after one year there have been a lot of changes in my life, but now I have my Lady of the Wings by my side. Looking back at all the photos, I remember what a great day we had and it couldn't have gone better. We couldn't have done it without our amazing family and friends, wedding coordinator, and some awesome vendors who helped make it such a special day for us.

I truly feel that I am so lucky.

Posted by Lord of the Wings at 3:07 pm No comments: 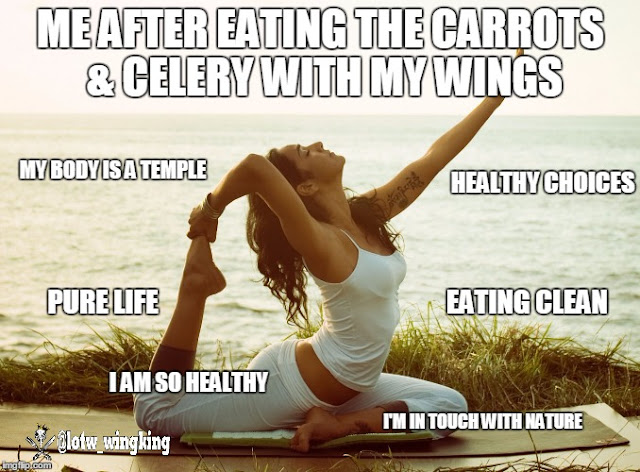 ... just ignore all that blue cheese and ranch dip. 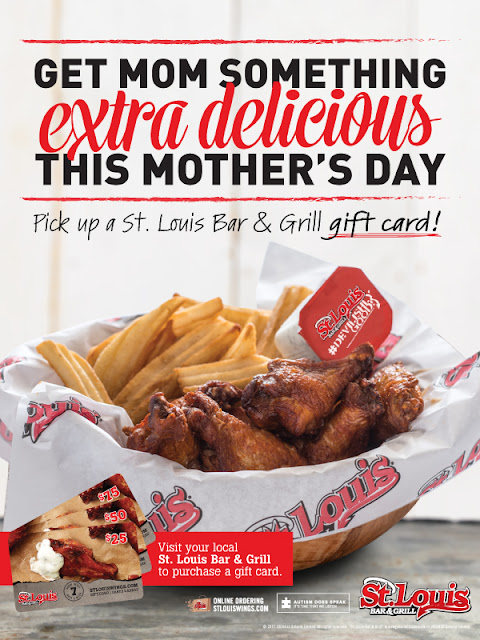 Posted by Lord of the Wings at 6:32 pm No comments: 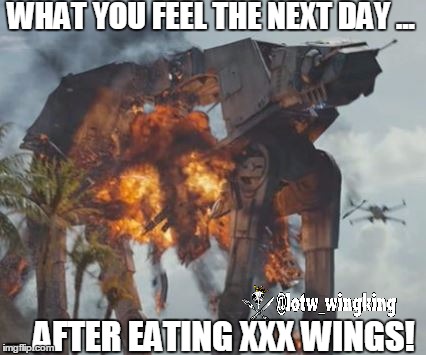 You know that it won't end well.

Also, this is still close to May 4th to count right? #maythe4thbewithyou

Posted by Lord of the Wings at 1:54 pm No comments: