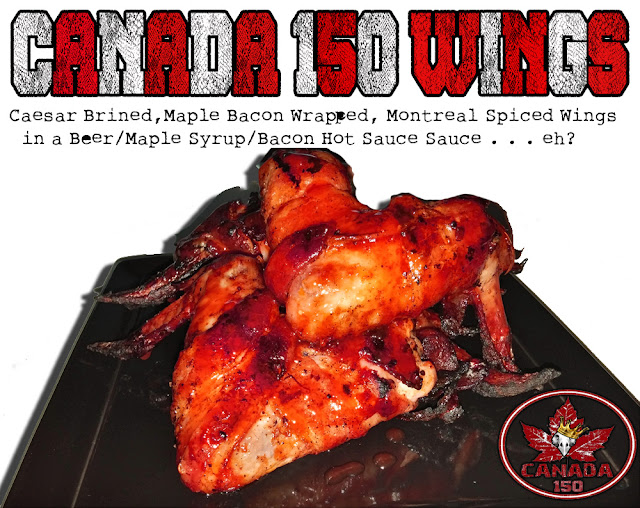 In honour of our nation turning 150 this Canada Day, I decided to come up with a VERY Canadian chicken wing. I had to think about some flavours that not only work together but also represent the flavours when one thinks Canada. I was tempted to rehash a poutine wing, but I came up with a decadent, multi-layered chicken wing tasting experience to represent "Mari usque ad Mare". 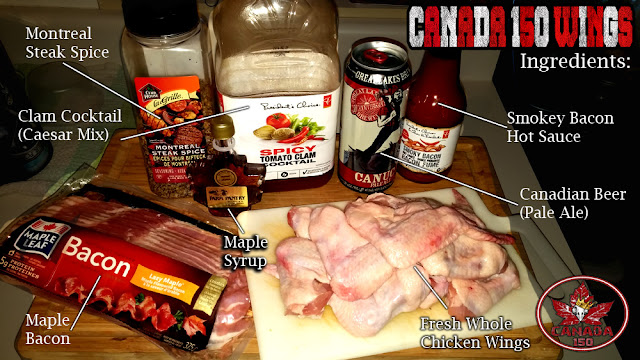 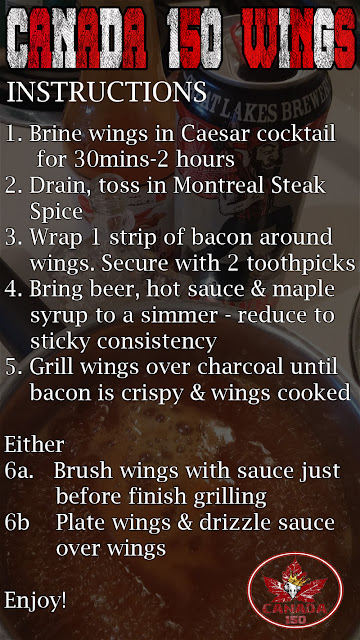 People want details with recipes; "How many wings? how much sauce? How many miligrams of spice?"  and that's not how I work. I mean I roughly gauge how much I'm putting in but it won't turn out exactly each time, and for you, you can make it your own.

1. Brine wings in Caesar cocktail for 30 mins-2 hours  - the longer the better
2. Drain, toss in Montreal Steak Spice  - sprinkle liberally
3. Wrap 1 strip of bacon around  wings. Secure with 2 toothpicks
4. Bring beer (i used about 1/3 of a tall can), hot sauce (I used about 1/3 of the bottle) & maple syrup
( I used a small bottle) to a simmer - reduce to sticky consistency
5. Grill wings over charcoal until bacon is crispy & wings cooked

Either
6a.   Brush wings with sauce just before finish grilling
6b    Plate wings & drizzle sauce over wings*


* I did the second so that I could taste the wings before the sauce was added. With leftovers I broiled the wings with the sauce on to caramelize the sauce in the oven - I would say 6a is the better way to go. 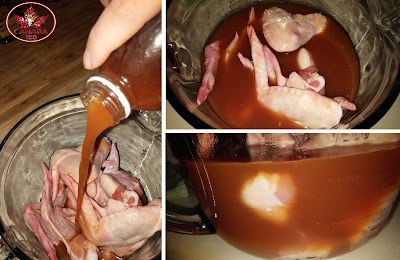 Making the brine - a Caesar, if you are unfamiliar, is a cocktail made traditionally Clamato (a brand of tomato juice flavoured with clam juice), Worcestershire, hot sauce & vodka and in a glace rimmed with celery salt and garnished with celery and lime. It is my favourite alcoholic beverage (extra spicy of course). I know clam juice sounds nasty . . . but it is not a fishy flavour, trust me.

How much do you use? Enough to cover the wings. 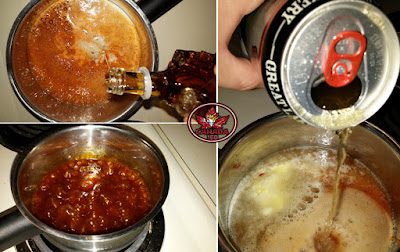 For the sauce I didn't want something that bathed the wings, but highlighted some flavours. So this was a small batch sauce. About 1/3 of a tall beer can (you can drink the rest!). I really debated what kind of beer to use but I wanted something that had some flavour but also wouldn't overpower the whole sauce.

1/3 of a bottle of the bacon hot sauce (if you don't have bacon hot sauce, that's ok, go with a cayenne based hot sauce. And the maple syrup - just use real maple syrup (not table syrup) but be gentle with the amounts. You want to simmer this sauce and reduce it to a syrupy state, but be careful not to burn it.

After the wings have brined for a while, drain that liquid off, and in the same bowl, add that Montreal Steak Spice. This rub mix of black pepper, salt, coriander, garlic, cayenne pepper and dill is the spice mix used to pickle Montreal smoked meat - which is delicious and is great on steaks. I've never used it on wings before, and it brings out a meaty taste in the wings. 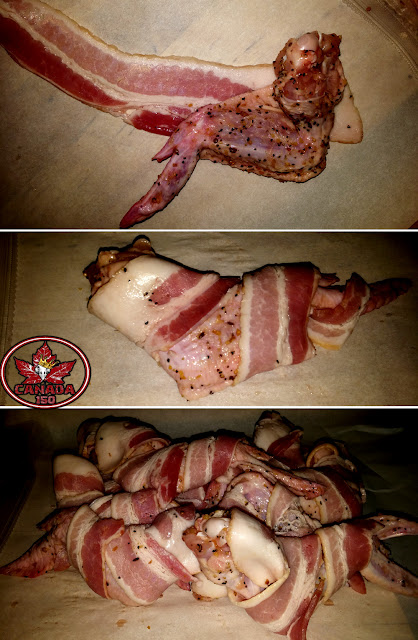 Wrap those wings in bacon. The wings are kept whole so that a single strip of bacon would easily wrap around and it would be easier to grill. Sure you could use typical split wings, just cut the bacon in half?

I also put a water soaked toothpick on each end of the bacon to secure them. 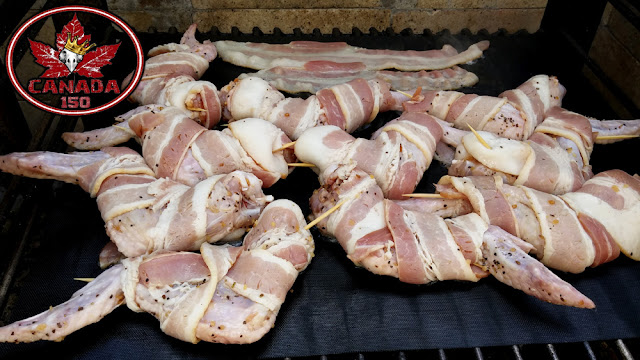 I live in a condo/apartment building that only has an open pit bbq grill that I cannot possibly control the temperature on. Let me tell you what I did and what you could do.

I cooked with lump charcoal to create that campfire smoke flavour that is like being in the great outdoors. I also used a BBQ mat at first so that the bacon on the wings would cook and hug those appendages tight. Later I removed the mat and let the flames kiss those wings and later raised them up higher to keep cooking through without burning. This whole process took about 40 minutes.

If you don't have this crazy BBQ set up, you could use your Big Green Egg and smoke, or more likely you have a gas grill. You know how your heating device works best, just be careful that a) the bacon fat doesn't flare up and burn the wings b) that the bacon cooks before the chicken cooks.

In the photo above, I had transferred the wings to the upper level, grilling corn (and allowing the bacon grease to drip down and flavour that corn! 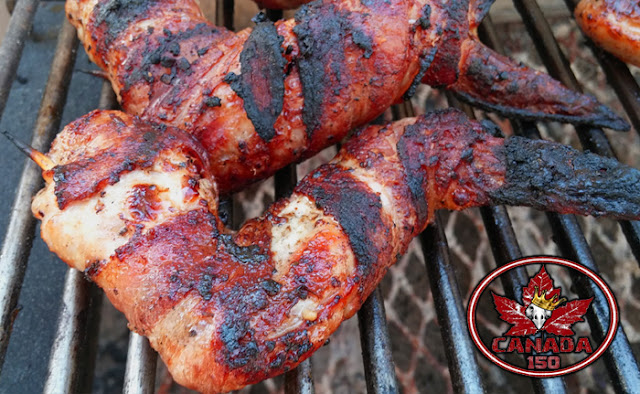 So the wings are cooked! Don't they look delicious just like this? Yes and they were. Pit master privilege meant I ate this sucker right off the grill. So good. 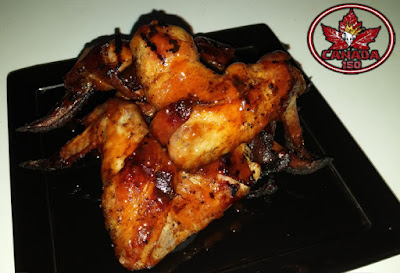 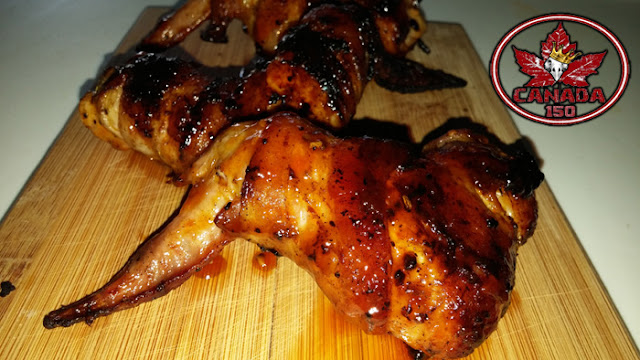 I was jacked up to have these wings. The bacon, the sauce, the chicken. You could do this in the oven but the BBQ is really the way to go. 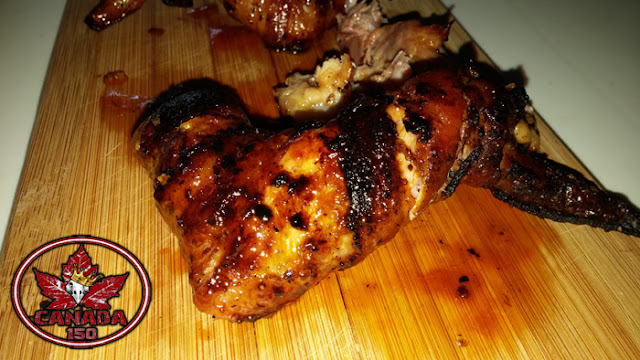 The flavours were all over the place, but worked together, like the mosaic that is our country. The rub and the rub gave the chicken a meaty spiced taste. The sauce was sweet but savoury with a bit of a kick. 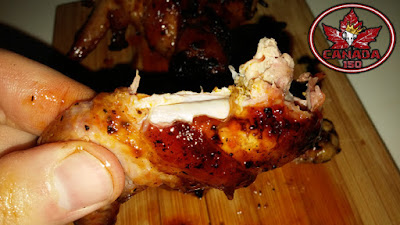 The brine also helped keep the chicken stay moist and juicy through the grilling process. My only complaint about grilling wings is the joints seize up and tearing apart the bones is not an easy process. 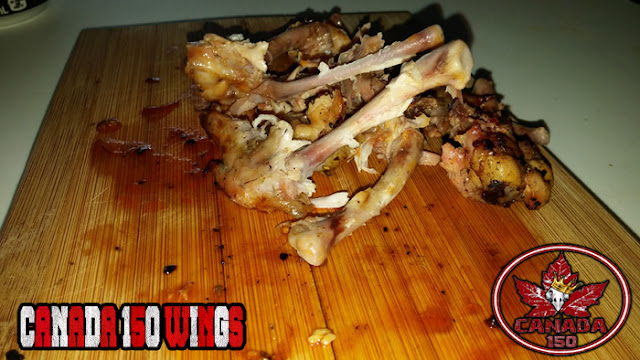 These were some decadent wings. The sauce is rich, the chicken/bacon combo is self-indulgent. I won't lie, these are not a wing you will eat in big batches without overwhelming your palate and body. A serving of 3 whole wings is best. But if you make enough, these were great leftovers.

So however you spend Canada Day, or anytime, these are a great Canuck inspired addition to our cuisine pantheon. 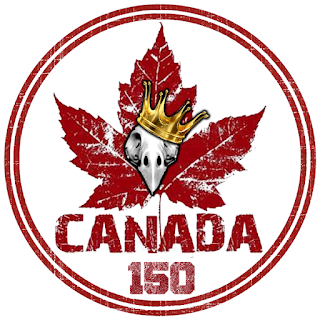 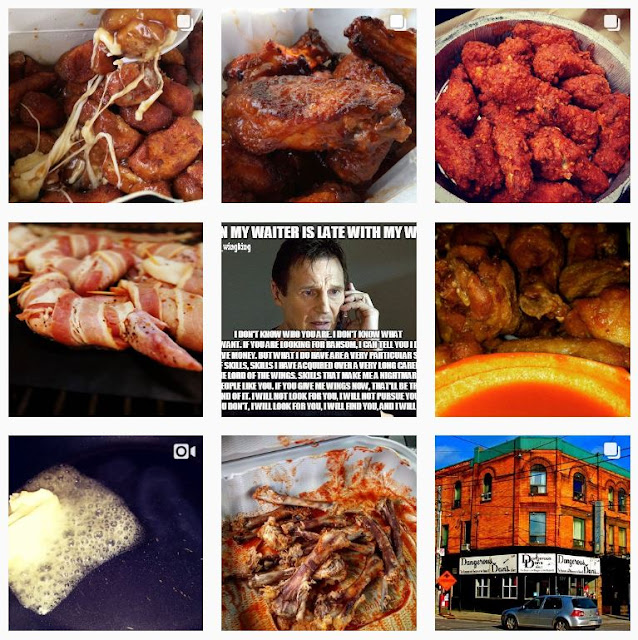 You can see this and soo much more wing goodness over on my Instagram account @lotw_wingking!
Posted by Lord of the Wings at 12:41 pm No comments: 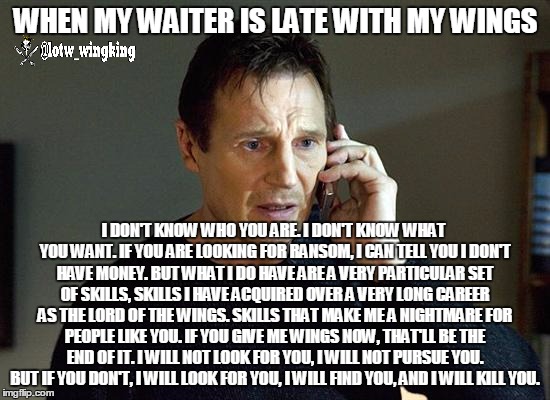 Posted by Lord of the Wings at 1:56 pm No comments: 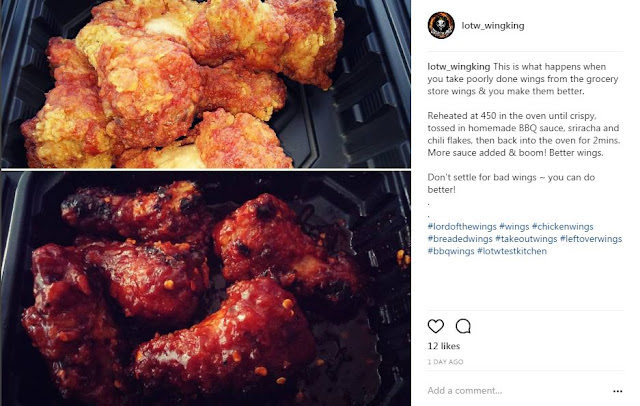 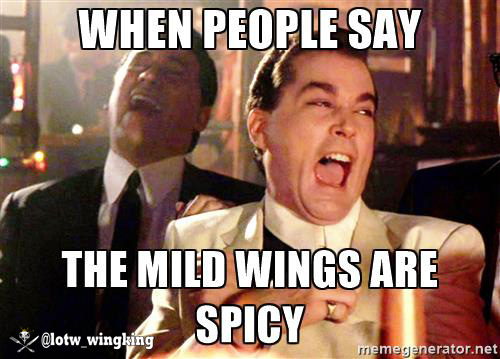 No really, there are people who find mild spicy.
Posted by Lord of the Wings at 1:56 pm 1 comment: 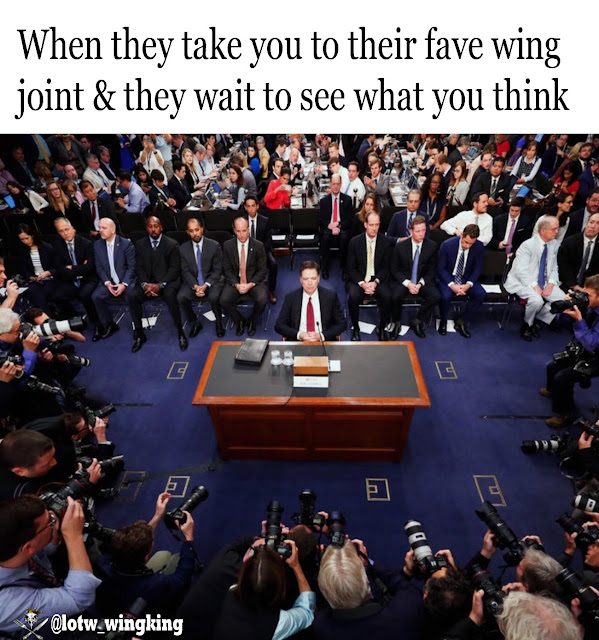 Posted by Lord of the Wings at 3:47 pm No comments: 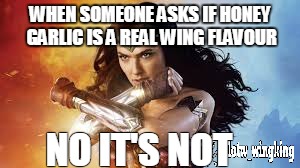 It is our sacred duty to defend the world against honey garlic. And it is what I am going to do.
Posted by Lord of the Wings at 3:50 pm No comments: