Welcome to the first episode of Wing King TV (WKTV)!!! Experimenting with some technologies, I hope WKTV will become a regular event here on the blog. What is WKTV? Well, I decided to tape my training with the intent of putting it on Youtube. And I did. On special occasions I can tape some reviews, recipes and other wing related events so that you are one step closer to experiencing the wings with me.


Now you can watch my secret strategies as my training continues. Actually at this point, its only a few short hours until the Wing Eating Competition (WEC) begins. First thing was to deep fry 20 dusted deep fried wings, tossed in a lime-chili Buffalo butter sauce (I used Frank's Chili-Lime sauce, and I wasn't really a fan). 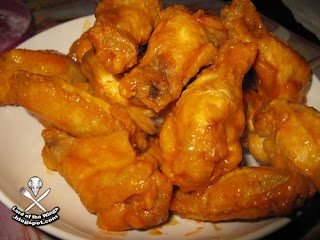 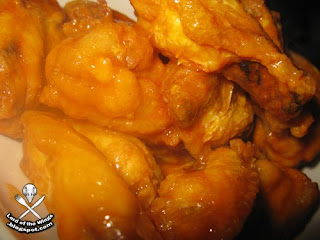 The wings were ready, the pop can at my side, napkins, a wing plate, and a plate of wings. I'm ready to eat 20 as quickly as I can. Ok. Roll cameras, and . . . ACTION!
Warning: there is profanity in the following video (music only).

WKTV was originally just for entertainment to show you folks how the eating is coming along, but after watching it, I can see a lot of mistakes I am making, so the video became an educational tool to help me improve my game.

First, I'm not fast enough. I find it so hard to rush through good wings and not get every delicious morsel on the bone. I have to get past it. Push through the wings as quick as possible. I didn't have a clock either, and with no one sitting beside me to compete against, I didn't feel the pressure to speed through.

I went with 2 wing eating techniques that I'm comfortable with. For the drummies, I used the Spin Move, basically taking the drummy and spinning it removing all the meat from the bone. Again I can speed this up as I was a bit slow, but it worked excellent for removing a lot of chicken quick. The other move I used was the Small Bone Twist, with some variations using the wingette piece. When done successful, the meat can be sucked off the remaining bone easily (as seen in the video). However, if the nub is tough at all, it can be time consuming to rip apart (as seen in the video).
The key is that I have to have chicken in my mouth at all times and just go go go.
What was successful about the event?

On Sunday, I know what I need to do. I felt good after the wings, so it is just a matter of speeding everything up. I can do this.

And remember, check back soon to find out the results (and photos, and maybe even video) -

Best of luck Wing King, you can do this thing.

After watching the video it dawned upon me that as much as you dig wings, when you're in a competition like that it's not about enjoying them really. It's just powering through them as quick as possible.

Can't wait to see the followup post. We'll have to write an article for the hotwings.ca site and link to your stuff.

Cool! I love the new video stuff!
Too bad wings aren't my thing...
Good luck in the contest!

Love the WKTV...hope to see more of it!!! Good luck tonight

Here is some inspiration:

You can do it!

Clucker - ya, it's been fun, but I'd rather enjoy the wings!

RIC - thanks for the luck, but it didn't arrive from China fast enough :(

Teena - they were pretty good. But I don't recommend Frank's chili & lime

MindGrinder - awesome! You're much better at competitive eating than me!!! When will Defcon day return to Toronto?