You never know for sure where you are going to find wings. 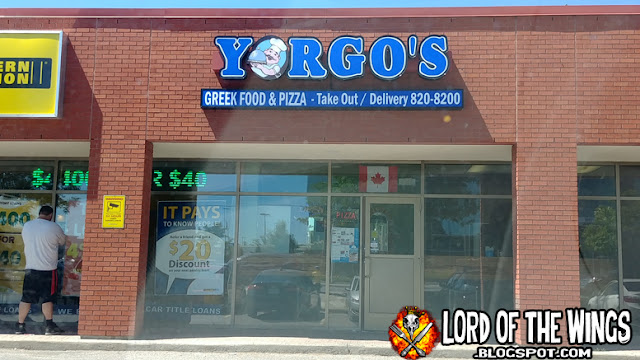 Take Yorgo's for example; here is a small Greek delivery chain that also serves pizza. They also serve chicken wings. So of course I went to Yorgo`s. 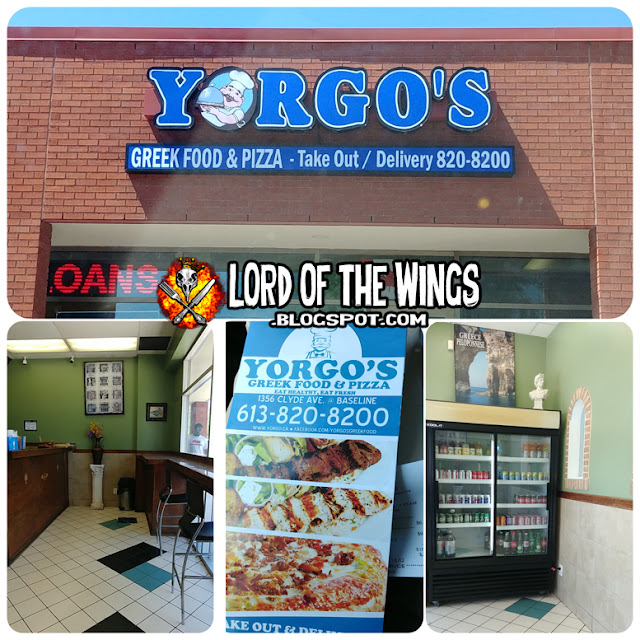 I walked into this eatery and the first thing I noticed was the smell of grilled souvlaki. Amazing. The place was clean and neat inside, and I saw two staff working hard in the back. Other than a few seats at the window counter, this is a take-out/delivery place, with little hints of Greek culture like posters, pictures and statues. 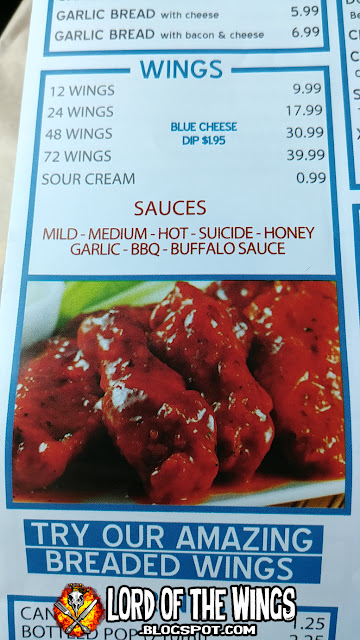 I grabbed a take-out menu to see what they had in the way of wings - the picture made the wings look amazing. But I'm pretty sure its a stock photo. Only time would tell. Also you can tell this is an Ottawa wing place because they have sour cream along the pricing of the wings, but the blue cheese is an after thought that almost looks like it was stamped on after.

The guy running the place gave me the impression he might be in charge of this location because he was hustling and he was super friendly despite working hard in the heat - it showed he cared. When I asked about the wing flavours, he told me that Hot was Frank's, Buffalo was Frank's Buffalo, and Suicide was 3rd Degree (really hot he told me, not realizing he was talking to a #3rdDegreeAddict ). Having had 3rd Degree recently, I went with the Buffalo for a flavour change. He implied that was a good choice because the 3rd Degree is really really spicy. 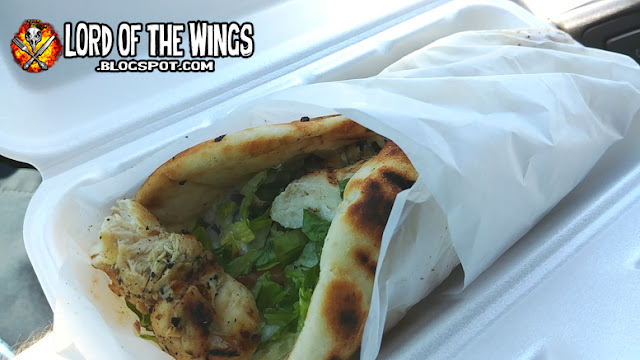 I was there to get wings, but that smell of the souvlaki was just too intoxicating so I got a wrap as well. The wrap was on a grilled pita, with lettuce, tomato, onions, olives and tzatziki, and chunks of marinated chicken. 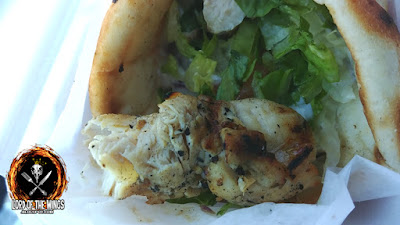 The wrap was fresh, but this was one of the more disappointing Greek wraps I've had in a long time. The pita was cooked a little too long, leaving it more crunchy and charred than soft. The chicken was nice and flavourful though. The pita was very light on tomato or olives (thankfully because I don't like olives) or onions. It did have lettuce, and I think it's shredded romaine lettuce, which I found it bitter and overpowering. There was also almost no tzatziki. I ... I wouldn`t get this again. 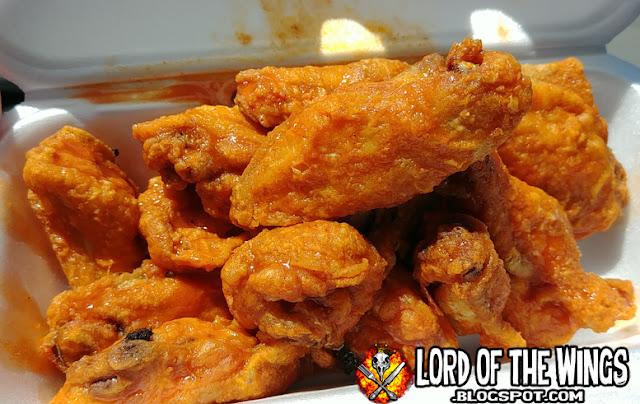 At least I had wings to recover from my wrap fail. 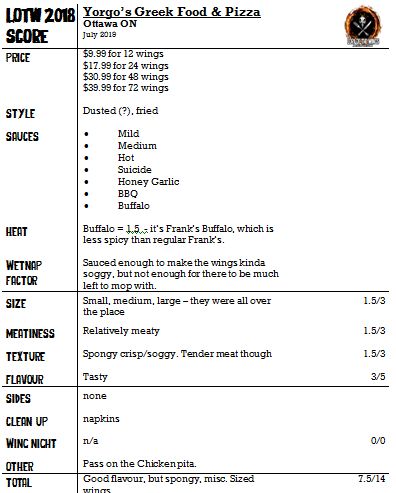 The wings smelled great even before I opened the container - that was a good sign. I open the styrofoam container and took in all the wings. I noticed 2 things that differed from the menu: 1) they were not breaded 2) they did not look 'amazing' and were not sauced the same - not that they looked bad at all, just not AMAZING. Stock art strikes again! 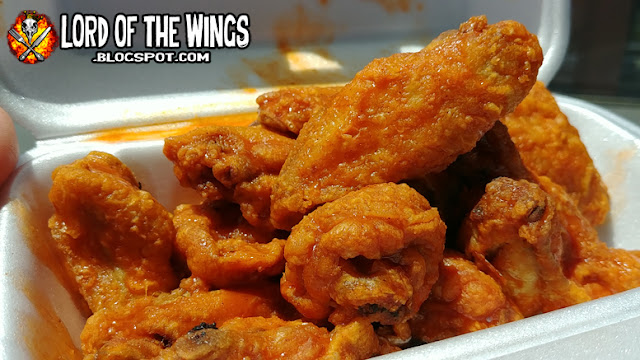 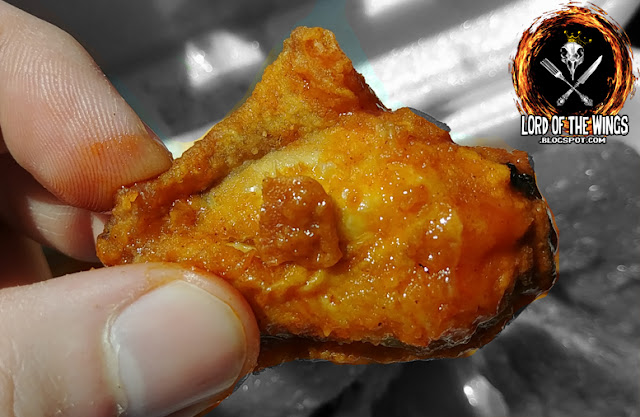 These wings were a wide variety of sizes. Some large, some were a medium, but some were like the one in the above photo that was particularly small.  The wings were relatively meaty to their size. The meat was pretty tender too. 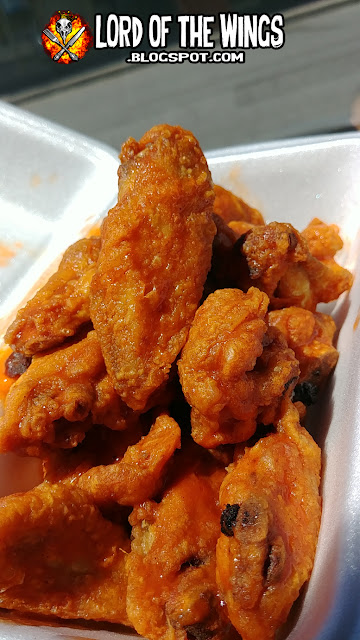 Yorgo's gave a fair amount of sauce on these wings, which meant they were pretty wet. The skin might have been crispy when first fried, but it was not so much after absorbing all that sauce. Still, they did have a kind of spongy crispness to them.  They say the wings are breaded and they are not; maybe dusted, but not breaded. If I was going to get these again, I would get sauce on the side.

Note: this is a skin staining sauce, so you are going to need wet-naps (not provided). 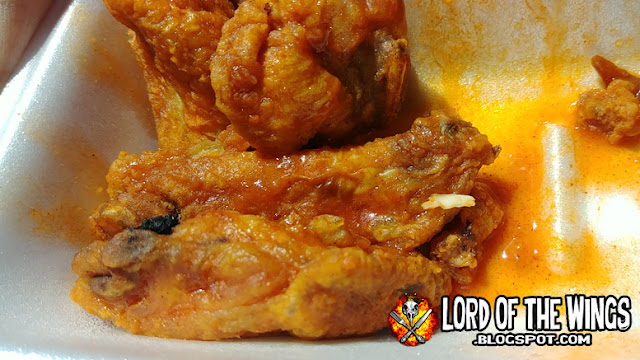 I went with the Buffalo, which is Frank's Buffalo sauce. The sauce was pretty tasty as it's kinda buttery kinda spicy kinda sour, but it's no real replacement for authentic home made Buffalo sauce. It's not as hot as Hot is, but it has more flavour levels. 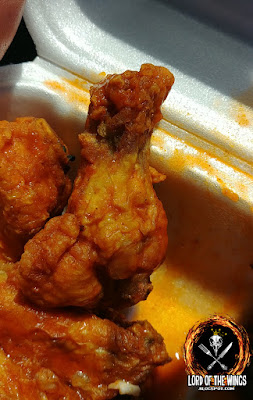 I was hoping to find a little gem of a Greek and wing joint like I had when I was living in Toronto. I've yet to find that replacement here in Ottawa. The pita was a pass - too few toppings and sauce, slightly overcooked pita. The wings were tasty, but were all over the map in terms of size and were a bit soggy. I'd get them again, but I'd go sauce on the side, and I'd probably get a Buffalo/Suicide sauce mix. 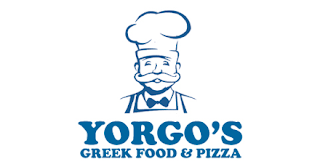