I see sales as the time for experimentation. On wing night I love maximizing my dollar to try as many different sauces as possible. When wings are on sale at the grocery store, I'm up for trying some new frozen wings I've never had before. 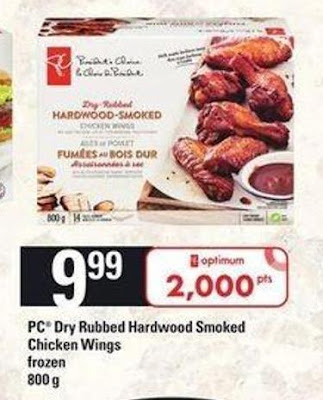 This was the case not long ago while at the grocery store. I've noticed President's Choice Dry-Rubbed Hardwood-Smoked frozen wings before, but I wasn't going to pay full price to try. Well they were on sale, and so here we are. My hopes were pretty low because I've been disappointed lately with other frozen wings. 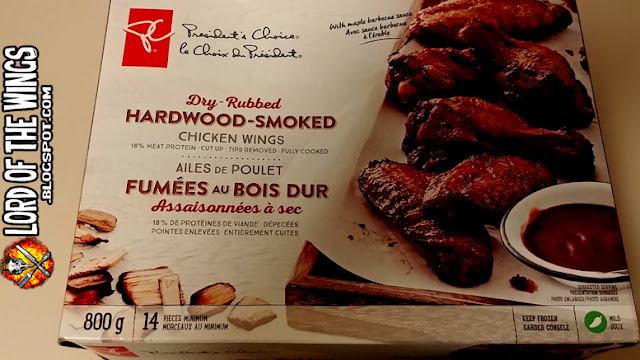 It sounded intriguing - a frozen wing that was dry-rubbed and hardwood-smoked? I have to give it to President's Choice, they will try all sorts of flavours out and I find many do work. 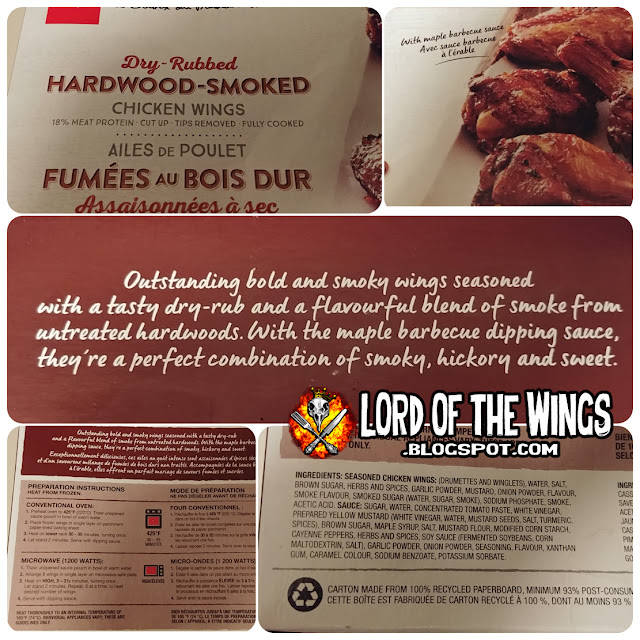 There are 14 wings at minumum in the package, and it lists it as 800g, but that is with the sauce pack inside. I find the wing ingredients interesting as well:


It sounds good, but what is 'flavour' as an ingredient? Also, there was a lot of smoke in there: smoke flavour, smoked sugar, and just smoke. These just might taste smokey after all. 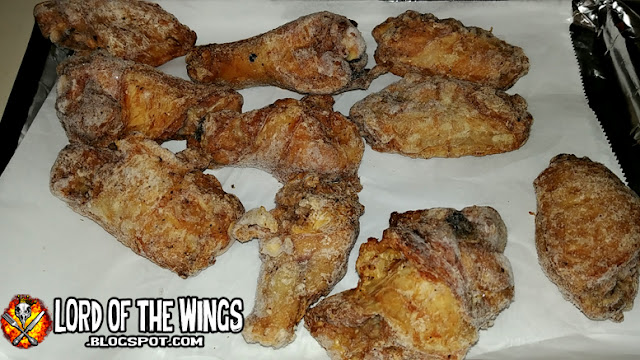 I was just doing a test run, so I put in half the wings, which worked out to be 10 wings. They had almost a freezer burned frosting to them, but they weren't freezer burned. 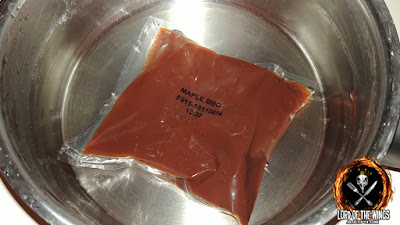 I was mostly interested into the wings, but I did decide to try the Maple BBQ sauce that came with them. It's frozen, but you just toss it in some warm water and pretty soon its liquid again. 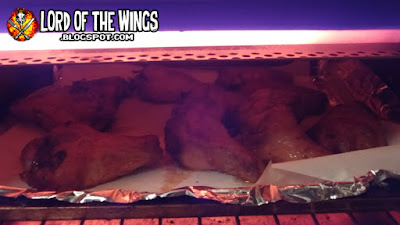 I cooked these in the toaster oven, and I was impressed with the wood smoked smell that was coming off of them. 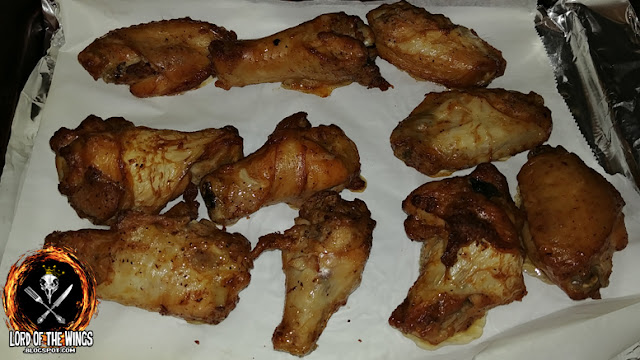 Well, they weren't anything too special to look at, but they did go kind of crispy. But they smelled really good. Literally the kitchen smelled like I had a small smoker. 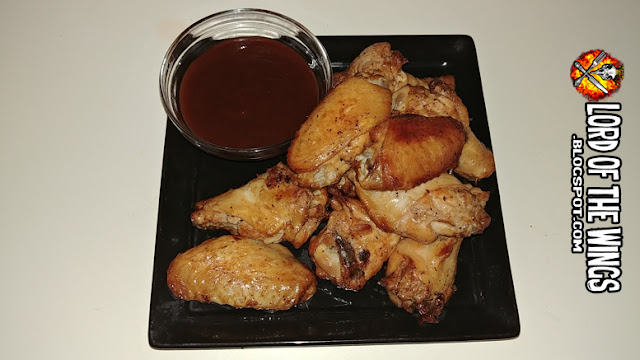 Interestingly, they were mostly light in colour, but a few went mahogany like a truly smoked wing ... 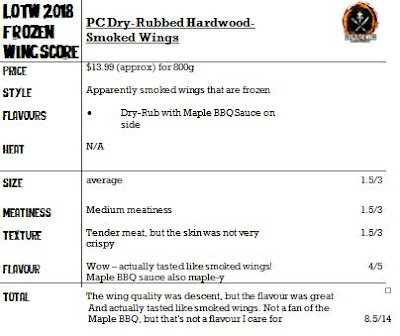 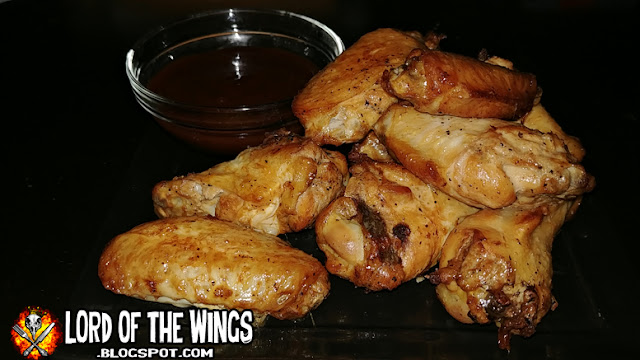 Looking at the wings, they kind of look like they came off a smoker and not out of the toaster oven. 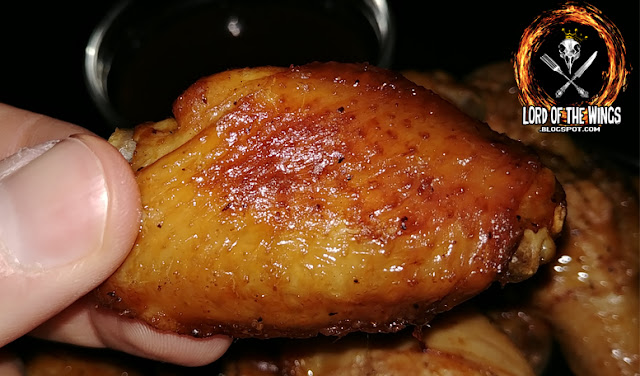 Look at that wing, that looks pretty damn good.

They weren't big but they weren't the smallest wings either. Length and meatiness were both average. The skin was, crispy is not the right word - slightly rubbery but not in a bad way, just crispy-ish? It was a nice texture for these wings. 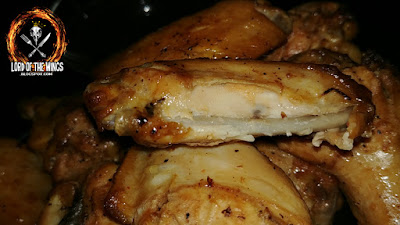 The meat was pretty tender, which hasn't been my experience with most frozen wings. I still can't get over that hardwood smoked flavour. 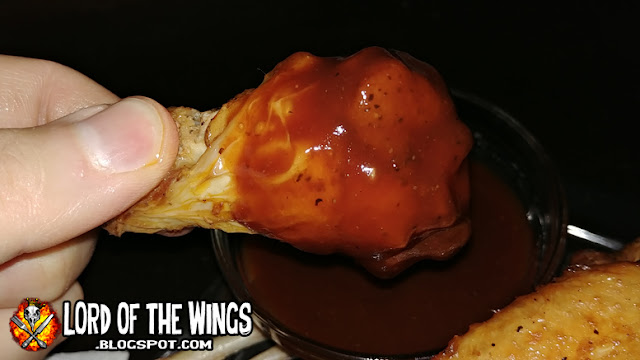 I tried the Maple BBQ sauce, and it, tastes like Maple BBQ. I don't go for that flavour usually, and this was ok. Its savoury and sweet but the maple is a hint rather than overpowering. Not my thing, but others might be into it. 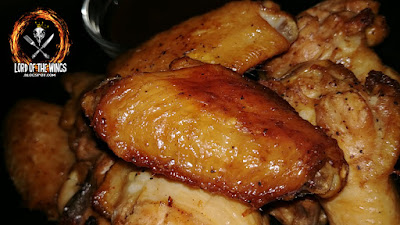 I've had a string of dissapointing frozen wings lately, some from Presidents Choice, but this was actually a swing and a hit for me. The wings aren't big, but they are tender and the texture on the skin is not classically crispy, but it's doing something I kinda like. The smell and the flavour of these wings are on point. If I was wearing a blindfold I would think I was eating a truly smoked wing. The smell, the flavour - these wings are there. I would pass on the Maple BBQ sauce and either go natural or use my own sauce. 8.5/14 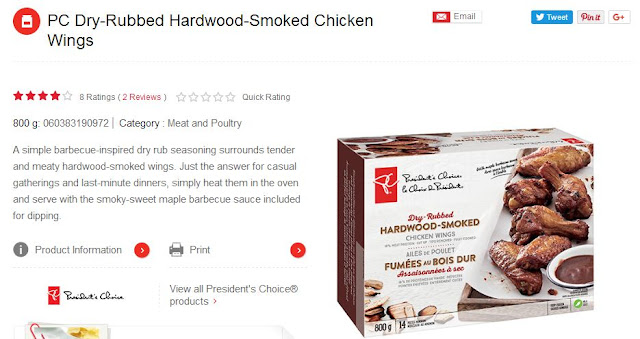