I've been to the "Friendliest Little Pub in Westboro" many times over the years as one of my go to places for wings. I first reviewed them in 2009, and a mini-review in 2017, and not much had changed, but I wanted to do a fully updated review. 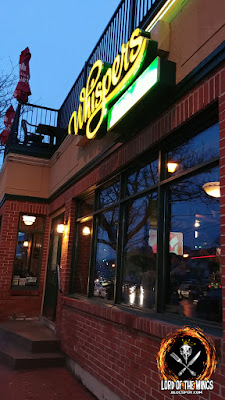 This was back in March during a mild but rainy day. My wife was out so I took it as a chance to get some wings. 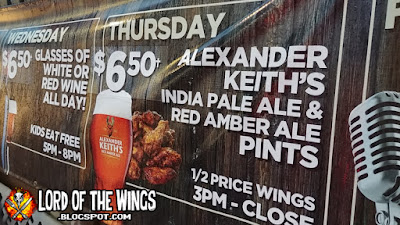 For as long as I've been coming to Ottawa, they have 1/2 price wings every Tuesday and Thursday from 3pm to close. I like that commitment to wing savings.

I was shocked (shocked) on this Thursday how crazy busy it was. Whispers is an old house that has been added onto and modified over the years and has many dining areas - I had to scan the different rooms to find someplace to sit by myself. I found a corner tucked behind several large groups at tables. One table was particularly interesting as they talked about how the history of the street and how much things had changed over the years. This pub has a very homey feeling to it. 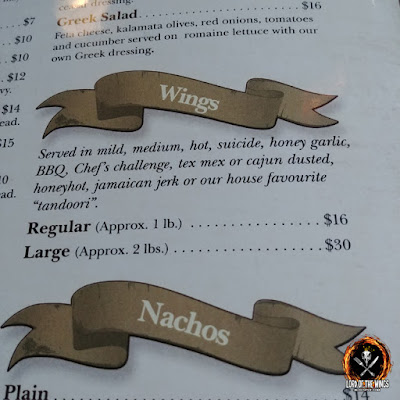 The menu has remained virtually unchanged in the almost 10 years I've been coming here. They have only one new sauce for their wings, "Tandoori". What is really shocking is the wing prices - is now $16 for a pound of wings. $16! 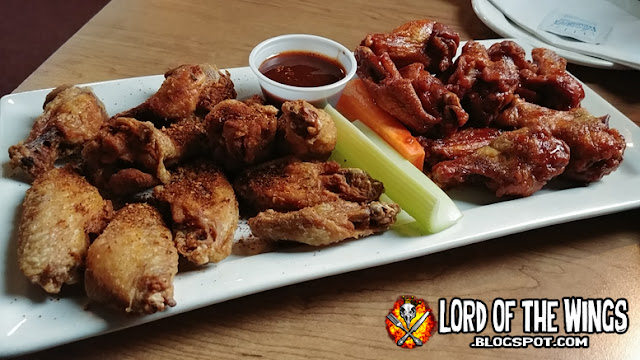 Because it was wing night I was doing two orders and some sampling. I like the giant rectangle platter it comes out on. 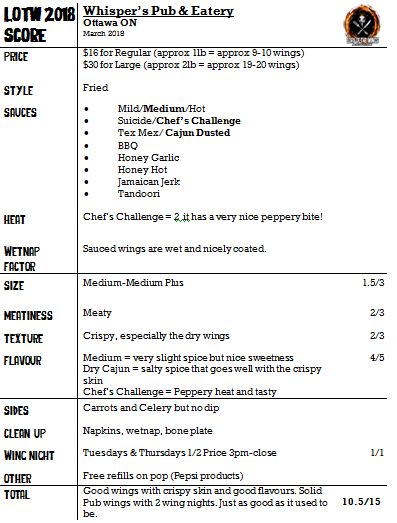 The wings come out on what is described as a Regular order or Large order. The Regular is classified as approx. 1lb which is about 9-10 wings, and the Large is 2lbs or about 19-20 wings. They are served with celery and carrots, but no dip for some reason. 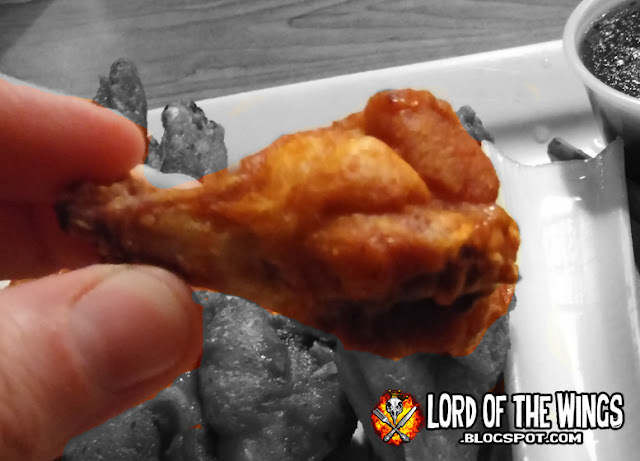 The wings are a medium-medium plus in length (not quite large, but almost) but they are a pretty meaty wing. The meat is relatively tender. The wings are fried and the skin is pretty crispy, especially for the dry rub wings. For the sauced wings, they aren't crispy for long, but I don't find that they go mushy either. 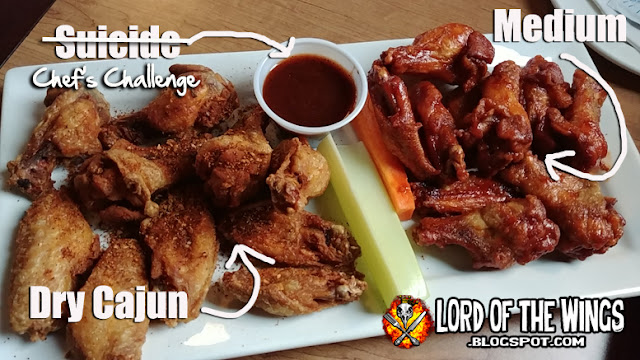 I like getting the Large order and splitting the flavours. On this visit, I tried Medium, Dry Cajun, and a side of Chef's Challenge (not suicide as I had originally wrote). 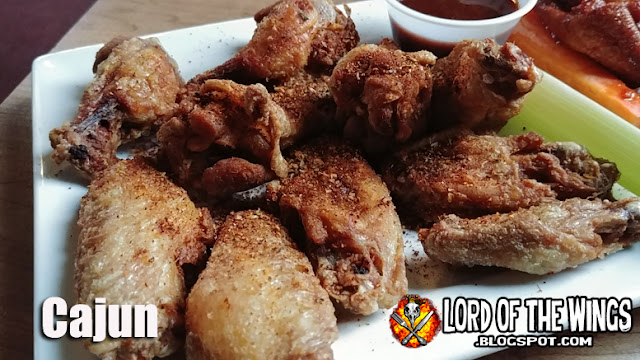 The Cajun wings are generously yet unevenly seasoned on the wings. The seasoning mix is salty, garlicky, but also has a peppered kick. It goes very well with the crispy skinned chicken. I also like it to dip with the Chef's Challenge. Overall a good Cajun dry rub. 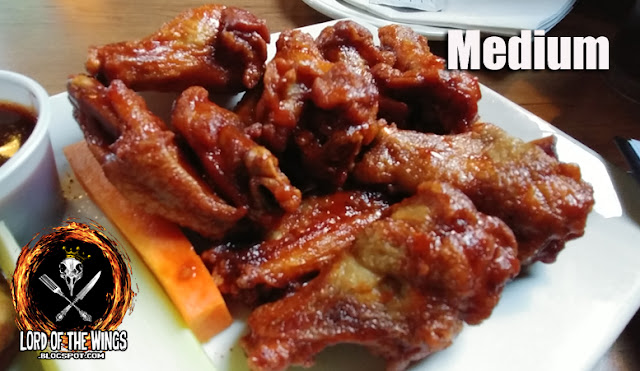 I know you might be wondering what the heck I was doing ordering Medium and not Hot. Well, the hot here is ok - pretty standard pub stuff. I had seen someone else's Medium wings and they were a sweeter, stickier version that I actually really dig. I like both the flavour and the texture a lot. 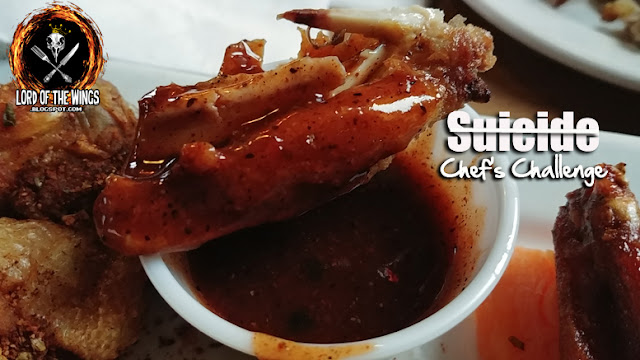 I don't know why I wrote Suicide, especially because I don't ever remember having the suicide sauce here. The Chef's Challenge is a great, peppery spiced sauce that has a good bite, but isn't going to blow your mouth out. So it's not a big challenge, but it has good flavour and can make you cough a bit. It's a homemade sauce and I appreciate that too. 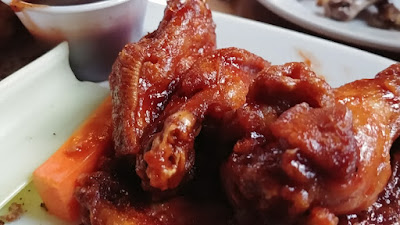 Whisper's is a great go-to pub. Really cozy atmosphere, friendly staff, and good wings. The wings are way to expensive on their own, but on wing night it's worth it. They are meaty and a good size, crispy skin, and wet and tasty sauces. On a side note, I was out with people this week and when people were talking about their favourite wing spots, this place came up for one of the folks. I understand why. 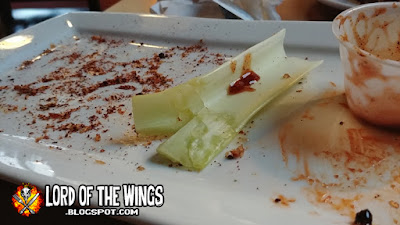 Whisper's Pub & Eatery
249 Richmond Road, Ottawa ON
whisperspubottawa.ca
Posted by Lord of the Wings at 4:30 pm