I had heard about Carlo's Pizza just over 10 years ago, but never did try their pizza. With my go to late night wing fix Casa Luna's closed for renovations, I decided it was the perfect time to try out Carlo's wing game. 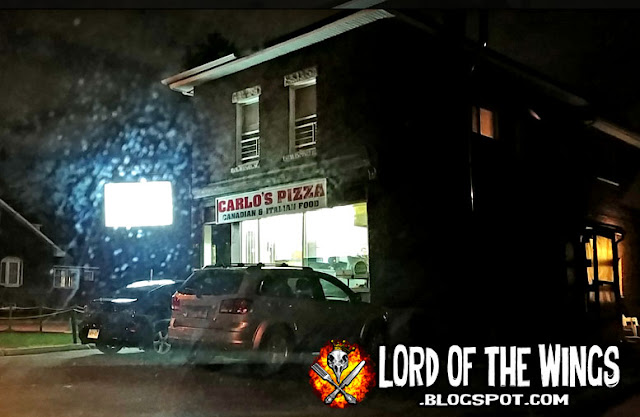 It was a late Saturday night and I pulled up to this pizza joint. It's in the middle of a residential street in Wellington West area - the only business within a few blocks. I actually called my order in before I arrived - I had some difficulty because my phone was cutting in and out, and the older lady on the other end of the phone had a thick accent, but eventually, I got my request for wings in ok. 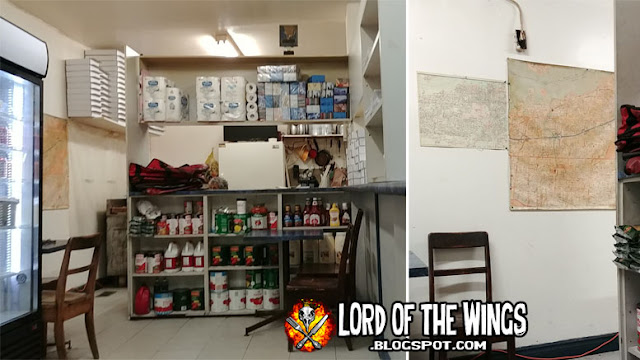 The inside is like many pizza places in Ottawa - bare bones and nothing changed in years. I was actually intrigued by the really old delivery maps from long ago still on the walls. I was surprised at the open display of all their ingredients (mustard, ketchup, oil etc) and I was surprised to see almost all were no name brands.

I was also surprised at the staff - it was 3 pretty elderly ladies working at like 10:30-11pm at night. One sat at a table doing prep work while the other two shuffled around making pizzas, answering phones and giving out the food to pick up orders and delivery guys. They looked tired, but the one lady who was taking payments was super friendly - she gave me a free pop! I said no but she insisted. 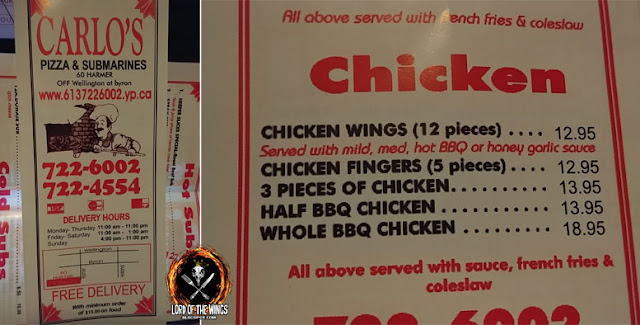 I didn't notice it when I ordered over the phone, but according to the take-out menu it's like a platter - comes with fries and coleslaw. 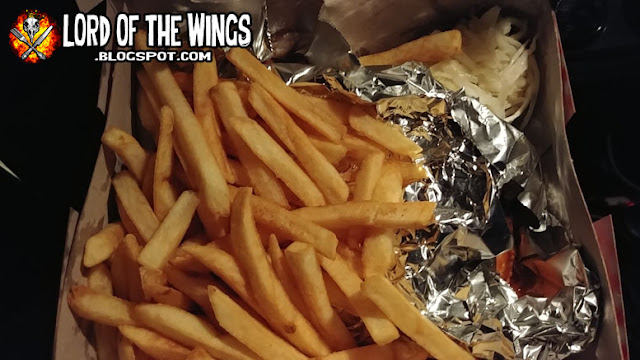 The food came in a cardboard box (yes - thank you for not using the Styrofoam containers!). They gave a very generous amount of fries that filled up almost 2/3 of the box. Unfortunately the fries were the frozen variety, so nothing special. I also would have liked to put on salt, vinegar, and ketchup, but that was on the counter on the restaurant and my order was wrapped up and stapled into a brown paper bag. 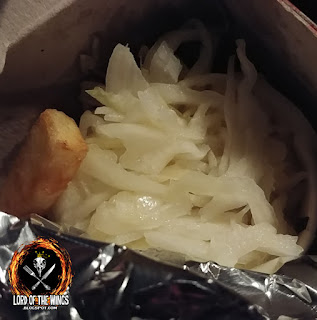 There was also a small cup of coleslaw - a vinegary slaw. I wasn't crazy about it, but I often am not. It was ok and a bit warm by the time I had it. 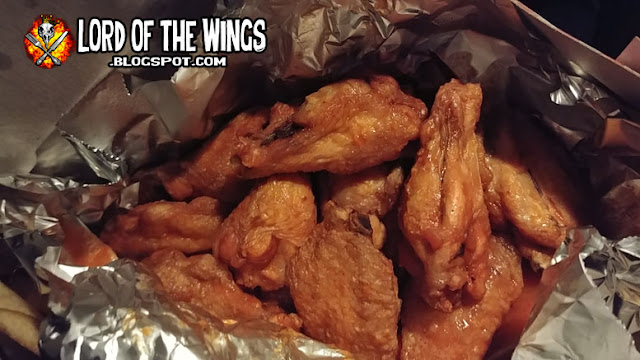 The wings that I had watched them deep fry, were put into tinfoil and wrapped up. They smelled good! 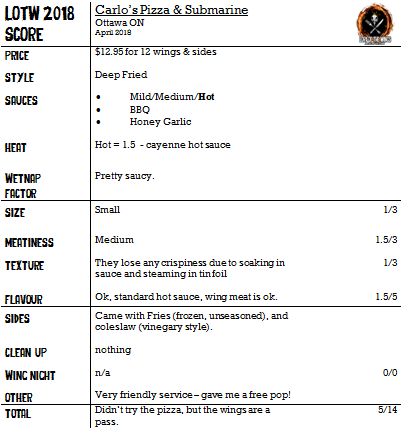 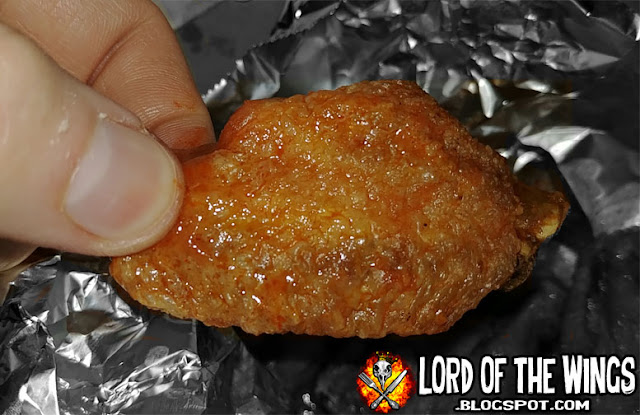 The wings were relatively small, and about a medium meatiness. Although the wings were fried and looked crispy, because they were wrapped in the tin foil they were basically steamed. 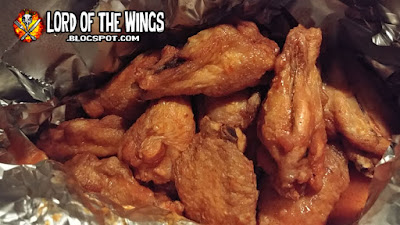 The wings were thus pretty tender, but again, were kinda soggy due to the steaming. 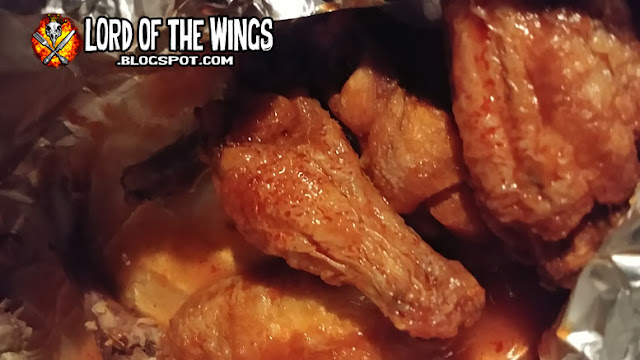 The sauce was a simple cayenne hot sauce. I'm guess Frank's or some sort of no name based sauce. It was good - classic hot wings, and there was enough sauce for the wings to soak it up. 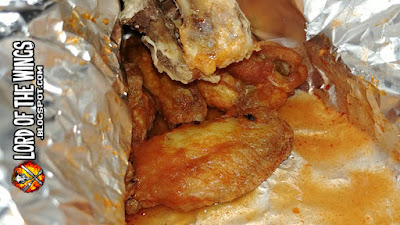 FINAL SCORE:
I'm always sad when a local joint isn't a hidden gem. The wings were small and soggy. Yes there was lots of sauce, but the wings were not worth going back for. There was lots of fries but they also weren't special. Coleslaw was a pass too. Based on the amount of pick ups I'm willing to guess that the pizza is very good.  But I won't be back for the chicken. 5/14 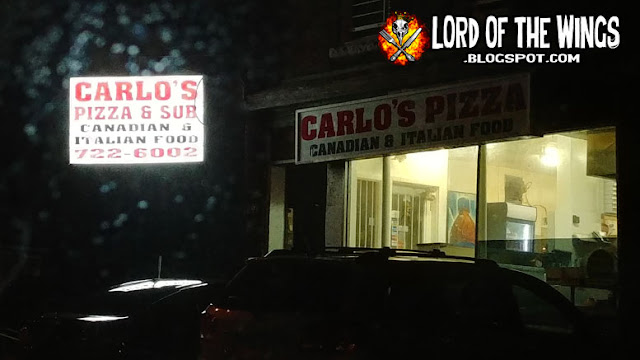 Carlo's Pizza & Submarine
60 Harmer Ave, Ottawa ON
carlospizzaria.ca
Posted by Lord of the Wings at 3:18 pm