Always on the hunt for new places for chicken wings, sometimes I take chances. 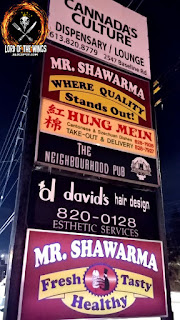 Searching the internet for people talking about good wings, I found that there was a pub that not only had good wings, but had a ton of pinball machines. Information was scant about the place - it doesn't have a website, only a Facebook page, and no menu. I found on a pinball website an old menu with some specials listed: 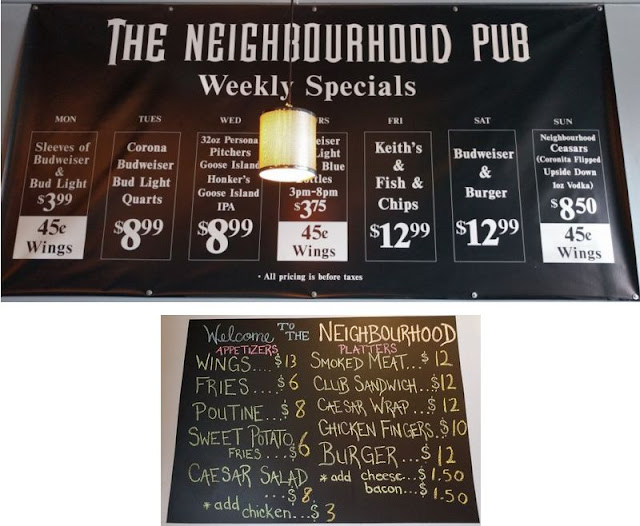 The Neighbourhood Pub down on Baseline in Nepean is nestled in a strip mall, and you could easily drive by without seeing it. I was on my own for dinner on this particular Thursday night and chose this place because they listed it as wing night. The parking lot was jammed full and I had to park in an alley in between parts of the mall. Later in the pub I overheard people complaining about the parking and that a big problem was the marijuana shop at the end.

Funny story, when I left at the end of the night, I went to drive out but this car had parked blocking the alley. The car was running and there was a passenger but no driver. I waited 10 minutes but they didn't leave. I got out of the car and knocked on the window of the passenger, some dude absorbed in his phone and seemingly high. He didn't open the window, and I knocked again. He looked at me and looked like he was high on something and super unfriendly. I had to talk to him through the window asking if the driver was coming back or when they were leaving. He just looked at me with a vacant face but intense eyes. I went back to the car and contemplated my options. I had no options. Finally after a total of almost 40 minutes, the driver came out and I was free. Fun. 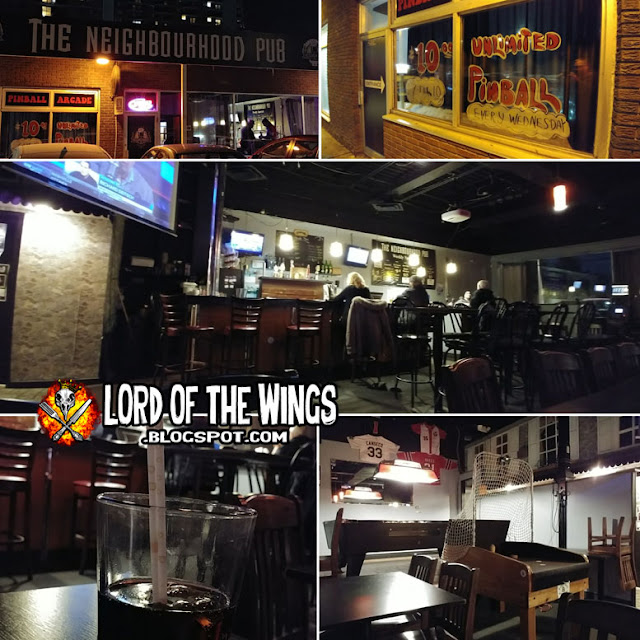 The pub is a total dive bar. I walked in and stopped in my tracks - the place looks like it was never finished being remodeled from the previous bar that occupied the space. There was a bar, and some bank tables, but I wasn't sure this was an eatery. I felt super uncomfortable and almost turned around, but all the patrons at the bar said hi or waved. So friendly! Made me feel welcome so I decided to stay.

The crowd was a mix of regulars, lots of senior types, dude in a suit, some students probably from Algonquin College. The decor inside was cheap and run down. There was pool and some games at the back but it looked more like things were just stacked as storage. The place was super dark and seating options minimal. To the left of the main room I heard a retro noise ... 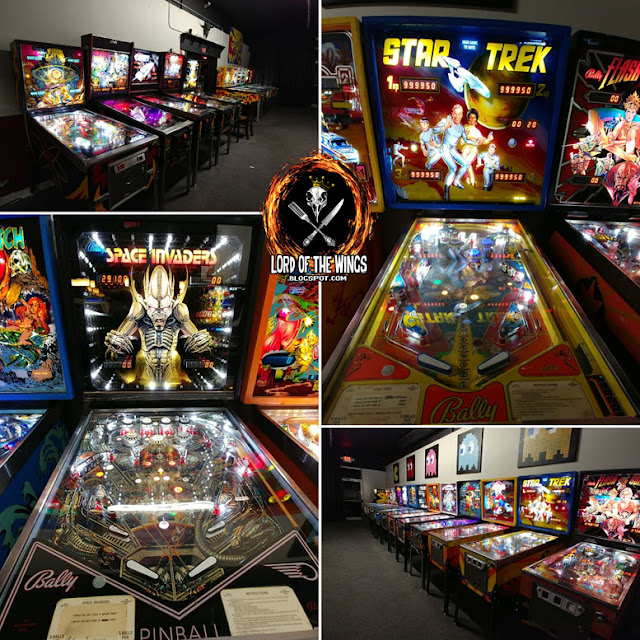 Pinball machines! This was the Ottawa Pinball Arcade. Over 20 pinball games were lit up and dinging. I came here after dinner. Most of the games were $1 or more, which seemed pricey. The machines were very vintage - like 60's and 70's mainly. I was expecting more the pinball machines I grew up with in the 80's that had a lot more gimmicky features, but these were still fun. Highlights for me were the Alien inspired Space Invaders, Star Trek and Elvira Mistress of the night games. Retro-tastic! 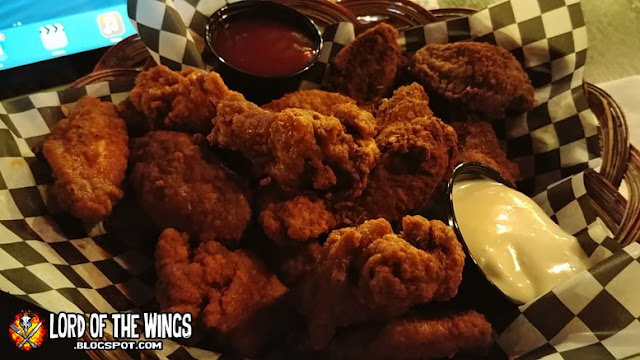 When I entered the pub and decided to stay, I wasn't sure who worked there. But a young guy came from back in the kitchen, I think his name was Adam, and he told me I could sit where ever. He was everything - bartender, waiter, host. His energy was high and he was very engaged with all the customers.

I asked about a menu and he said there was only a menu board on the wall, but because I sat at against the wall I couldn't see it. He told me it was wing night and I said I would do that. Because there was no menu, he had to recite from memory a long list of sauces and the list kept changing so I'm not really sure about all their sauces. He did mention they were mostly ED Smith sauces, which is who makes my 3rd Degree.  I picked Hot, dry Cajun, and a side of Honey Mustard. He came back out a little while later and sat at my table, apologizing that they were out of Honey Mustard, which was a good thing because while it tasted fine, it didn't look appetizing and he's recommend that the kitchen alter it anyway. I went with BBQ instead. 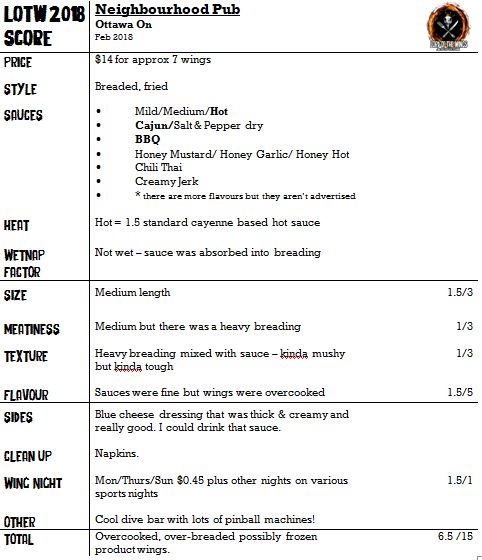 Up front I have to apologize, this place was dark and I was impressed I was able to get any postable photos at all. Wing's were $0.45 each on wing night (after 5pm), with about 7 to an order. I got a double order. There was no bone plate or wet-naps, just napkins at the table. 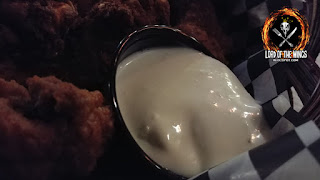 The wings did come with dip, and I went with blue cheese. This was an excellent blue cheese because it was both thick and creamy and had a great flavour. I could drink this stuff. 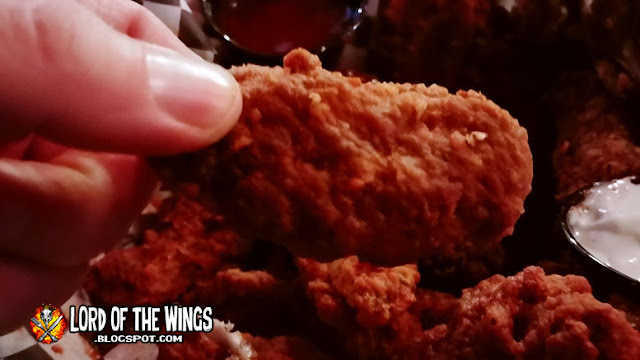 The wings were not large, about a medium and were maybe a medium in meatiness. They were breaded but they were also overcooked. I also suspect that they are a pre-breaded frozen wing that coupled with being slightly over fried meant they were not the greatest texture. The hot wings were not very saucy either and were kind of absorbed into the breading, which made it soggy and crispy at the same time. It's funny because all the photos on their Facebook page seemed to show a much better wing. 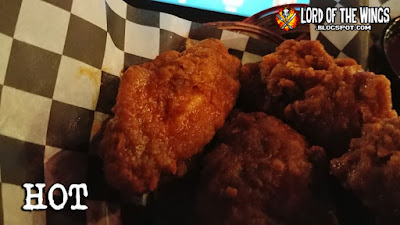 Hot was standard Frank's style hot sauce - cayenne based. It was good but nothing special. I would have liked a lot more sauce. 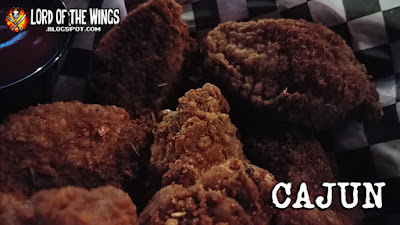 There wasn't a lot of seasoning on the Cajun, but what I could taste was fine. These were crispy, but as mentioned before, overcooked, so I was not digging these. I needed the bbq/blue cheese sauces for sure. 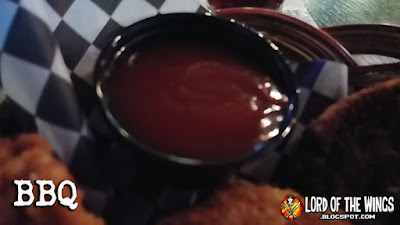 This was just too sweet for me. Tomato based and lots of sugar - tasted like commercial BBQ that I would skip in the future. 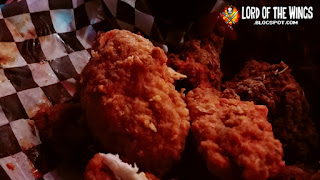 FINAL SCORE:
This is a great dive bar that while not super comfortable, has a great staff, friendly customers, and pinball! Check this place out for the pinball. The wings, I wasn't impressed with at all, but I'm willing to bet it was an off night based on others saying they have good wings. I'm willing to go back and see if there's a difference. If not, don't bother, especially at $14 regular price. 6.5/15 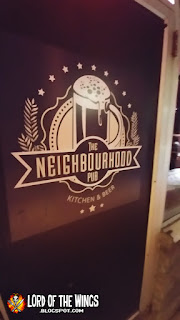 As you said, it might have been an off night. I've been there for wings about... what, 3 or 4 times now I think? The wings were fantastic when I went, apart from one time where they were a little sub-par (though still enjoyable) compared to what I had there before. But yeah, off nights can happen, but it's understandable given how it seems that they got only 1 or 2 people working the whole bar at a time.

Went recently (June 2019) with friends, and we loved it. Planning on going again for wings and pinball!

@Eric - thanks for commenting! I haven't been back to the Neighbourhood Pub since, but after reading about your positive wing experiences, maybe I'm due back!