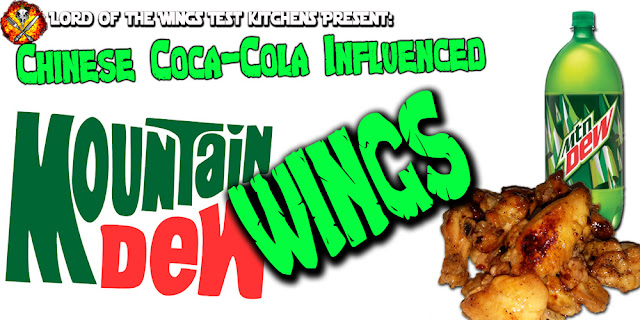 After visiting my folks, my dad had bought a bottle of Mountain Dew for me. We went to a family party and it was put in our cooler, and we came back home with the 2 liter bottle. I like MD, but I wondered if I could do anything with it wing wise. I remembered 8 years ago my buddy Dude and I made Chinese Coca-Cola Wings, a recipe very popular in China. You fry the wings, add some garlic, ginger, soy sauces and Coke (we did a simpler version) where the cola reduces to a syrup, so I thought, what would wings cooked in Mountain Dew be like? 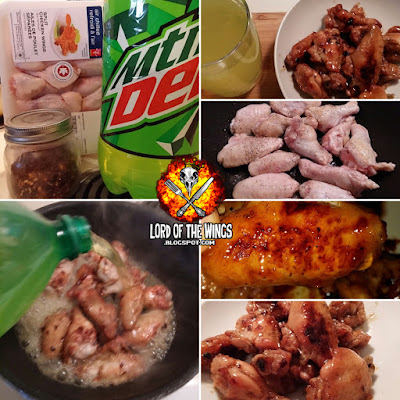 I tried to do some research to see if anyone else was doing Mountain Dew wings, and I read that Buffalo Wild Wings has their own version, but it was very different. So I stepped into the Lord of the Wings Test Kitchen to make my own. 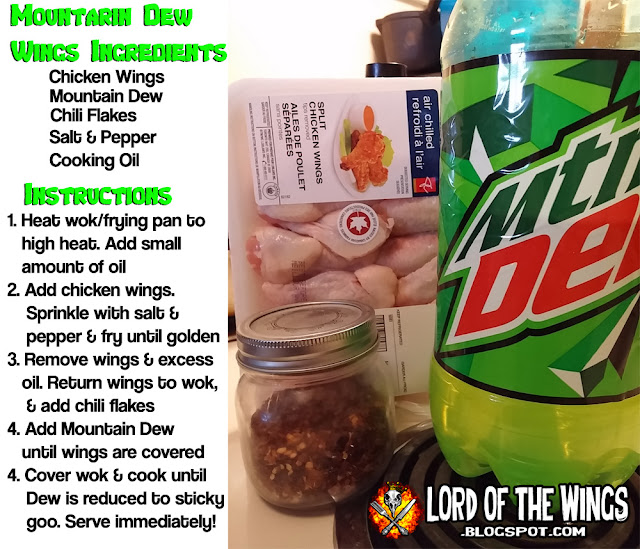 This is a super easy recipe/experiment. Fry wings, add seasoning, add pop, reduce. I tried to think what flavour would go well with the lemon/lime soda - I didn't think garlic or soy sauce. Some spice would help, but maybe just some flakes. Let's start basic and we could always build. 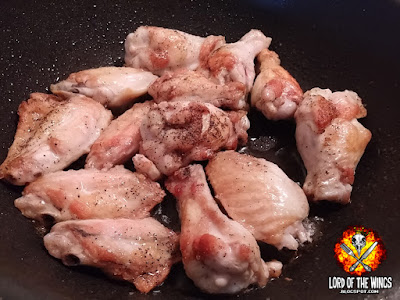 I started off with my wok/pan on high high heat. I added some canola oil and when it was hot enough, tossed in the wings, which I seasoned with salt and pepper. I had to overcome my urges from just eating them right now. I also thought back to my Coca-Cola wing and my buddy Ricky's suggestion to do the sauce on the side to preserve the crispness. I almost did this but thought I wanted the MD flavour infused through the whole wing. 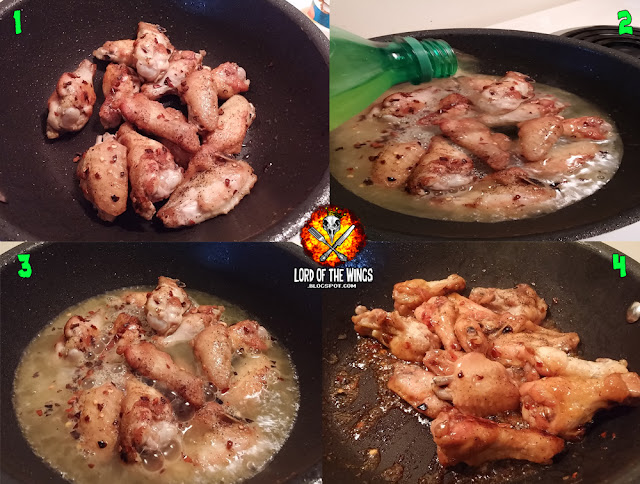 I won't lie, this does not look appetizing. 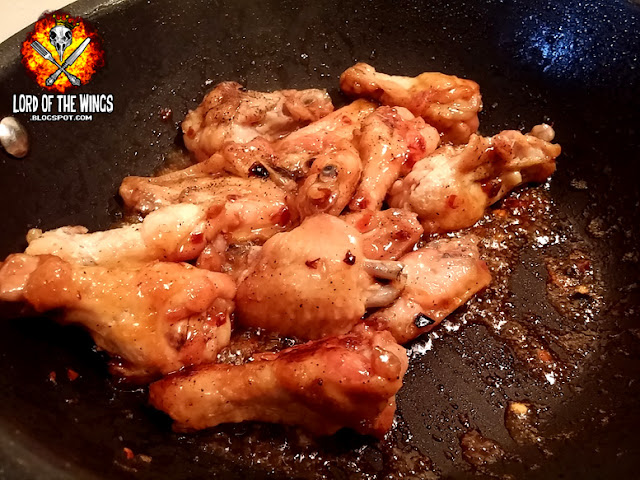 I was really surprised when I opened the lid - the colour was a caramel colour! I was totally expecting that neon green colour of the Dew. Instead, that boiled off quick, leaving just the sugar, which carmalizes as cola would. Who would have thunk it?! 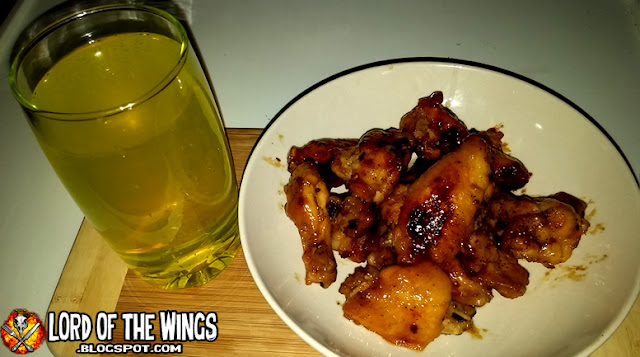 I won't lie, I was bummed out that the wings weren't neon green. But that didn't mean they weren't bad looking. I plated the wings and poured what goo was left over them. 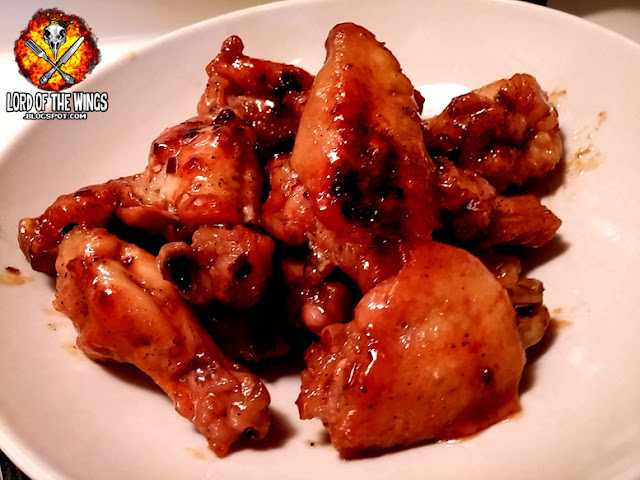 I took a bite, expecting a burst of fake-chemical citrus flavour. Again, I was wrong. These tasted just like Cola wings! Clearly the citrus essence boiled off with the colour. Does this mean that I could use any soda and it would all end up tasting the same? Orange? Cherry Coke? Grape?

The flavour was sugary, but not cloyingly so. The chili flakes added a nice bite that went well with the chicken.

The crispy texture of the wings was completely gone. Well maybe not completely; I wouldn't want to NOT fry before this process. So like last time, these wings are not crispy, but they were super tender. enough that the meat just fell off the bone. 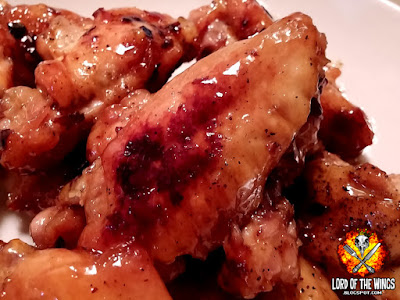 What would I do differently next time? I still like the idea of MD wings, but want more of that flavour.

So I didn't learn all the lessons from the last time, but I did learn more about this process. 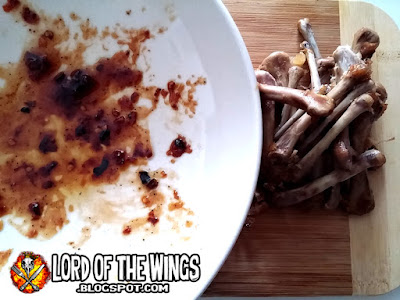 So feel free to try this recipe yourself and Do the Dew!
Posted by Lord of the Wings at 9:40 pm

The Winn-Dixie here in Jacksonville,Fl. has Mountain Dew wings on their wing bar. They taste amazing. I'll have to get the recipe next time I go.

@unknown - I've never been to Winn-Dixie (heard of them before though) but the fact they have a wing bar AND MD wings sounds awesome!