Flipping through channels, I came across a show called "Dr Ken" starring Ken Jeong. I have never seen this show before, and it has Dave Foley and this particular episode Rhys Darby. I didn't watch the whole episode, but I did come across this scene with the daughter (?) Molly making chicken wings for a guy she likes (?) ... I don't know I didn't follow the whole episode.

The important thing is that they were eating wings ...  from a fake recipe from the real show "Martha & Snoop's Potluck Party". 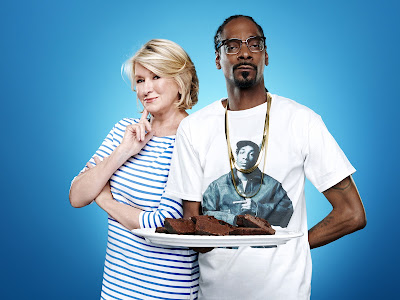 This is a show I have seen once or twice and it is ridiculous - I don't know how these two became friends, but it makes for some weird TV.

Have you seen either of these shows? Did you think the wings on Dr Ken looked tiny? What flavour would they? What kind of wings would Snoop & Martha make?

PS: Molly, wings were the right way to go, not hot dogs.
Posted by Lord of the Wings at 4:22 pm