=Fulton Burger Company in Ottawa is now CLOSED - RIP=
Back in November, I did a little review on a burger place called Fulton Market Burger Company. It was my first visit and I really dug the burgers there. They are pricey, but tasty. But I was torn. I had a personal dilemma like only I could: they had wings as a special. I didn't know what to do. Yes I was at a burger place for the first time, but wings were calling. Well I put my addiction aside and got the burger (as you know). But on a second visit, I could not resist sampling the wings. 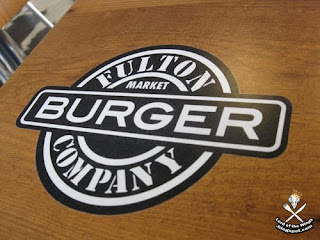 I don't need to go over the place or how to order; Been there done that. The wings were not the focus of advertisement this time. Although I did find a little fold-out add on a table. Otherwise the wings are not on the menu or the website. 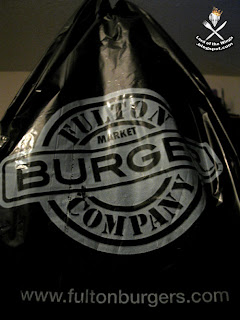 We got our food to go. Even though the restaurant was empty, it still took a long time for our orders. I'm going to go with it takes time to prepare good food idea, rather than slow service. The food came in a swanky black plastic bag. LJ had a burger, which she once again enjoyed. 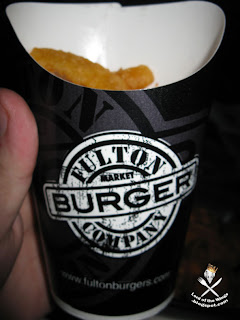 We split an order of cheesy onion crisps. They are available on their new sirloin burger combo, or on the side. For just under $4 for an order, you can see in the photo above they are not generous with their portion. And unlike other burger places with fries or rings, there was certainly no overflow in the bag of stray samples. 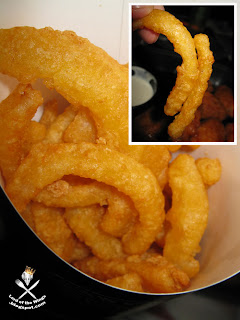 So what are they? They are an onion ring with an intense cheddar flavour. By the time we got home they were not crispy, and many were stuck together. Not really an onion ring, or a pedal, these were cheesy in flavour, but I cannot for the life of me think of where the cheese flavour reminds me of. They were an interesting sample, but for the price, no way would I get them again. 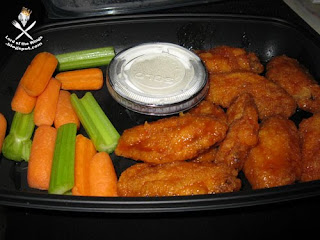 The entire ride home all we could smell were the wings in the car. From the back seat the wafting of cayenne and chicken made my mouth water. In my mind, I was sure these weren't going to be great wings, but my senses were telling me something else. 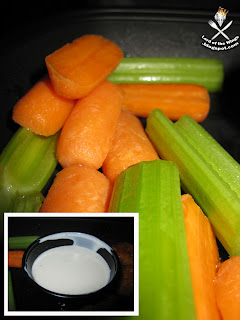 The domed take-out container also kept a garden of baby carrots and celery chunks. I was surprised not only at the generous helping of veggies, but that there were veggies at all. All too many pubs and eateries are not serving this side with wings, but this burger joint is. And thank goodness it was with ranch and not sour cream. 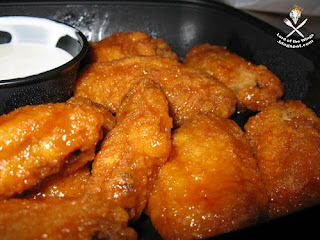 I took photos quick, because I really wanted to sample the wings! 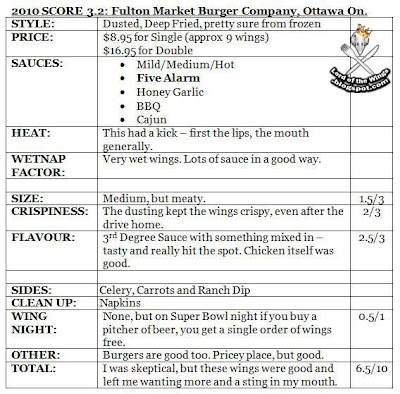 There were 9 wings in a 'single' order. The wings were dusted (or very lightly breaded) and were surprisingly still crispy, despite having been on the road for 15 minutes and in a steam sealed container. They were also all wingettes, which I found interesting. 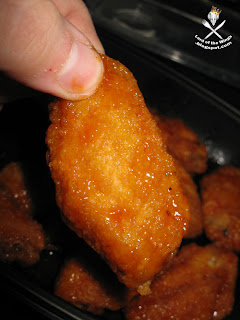 The wings were on the medium side. Not big, but not that small either. They were also meaty. The meat was also really tender (probably from the 'steaming' in the container) and the bones came away from the meat with no struggle. The chicken wings were nice and wet. Lots of sauce, but not so much the wings were soggy. I ordered the 5 Alarm sauce, which is their suicide. Hot is Frank's (as seen in their advertisements). 5 Alarm sauce was 3rd Degree with something mixed in that gave a taste boost as well as a greater heat kick.

I like this flavour, and there was a stinging. My lips were feeling it after the first bite, and the rest of the mouth followed suit shortly there after. LJ took a bite of one and while she said she really liked it, it was too hot to enjoy. FINAL SCORE: I was really skeptical about these wings, despite my sick nature to want to try them. I mean, the place is a burger joint, these have to be frozen wings, right? Well, if they were frozen, these were still a good wing. Crispy, saucy, spicy. The meat was tender and I found myself wanting more when I was done. I am impressed. Not amazed, but Fulton's wings are better than you would expect. 6.5/10 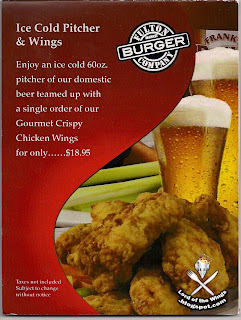 The fact you got wings at a burger joint made me think of something. Have you ever had a buffalo chicken sandwich that you liked? What was the best one?

I love a good buff chicken sandwich, but like wings, they are often treated sloppily. When done right, they are awesome.

For a burger joint, you rated these wings pretty high.

Chris - most of the time, if a place has a BCS, they have wings, so I go with wings. That's not to say I don't enjoy a good BCS. Off the top of my head I can't think of really good ones, but I'll get back to you . . . or there's a new topic to do!

Teena - I know - but they really hit the spot. Thumbs up for sure.