On January 1st my wife, father-in-law, and myself woke up to our last day at our resort in Cuba. After having not slept (New Years celebrations were MEGA LOUD) and went on until 2:30am outside our room. We woke up early, had breakfast, finished packing and went to wait for our bus to the airport at 9am. The bus was almost an hour late, and the security line at the airport took forever. The airport did not have any food options we wanted (aside from overpriced Pringles), so we decided to eat on the airplane.

The plane took off, and we were in the air. Our flight did not include food, but they did sell overpriced meals if we so chose. We decided to get something because we wouldn't be in Toronto until after 5pm. We chose our seats to an area that would have better selection of items because on the flight TO Cuba, we only had the option of cheese and meat sandwich. I listened to the cart and we planned our options: chicken fingers? Burger? Cheese Pizza? Turkey Bacon sandwich? After the terrible food we had in Cuba, anything would be tasty. I listened as the stewardess approached our seats. Then, she stopped asking the folks behind us, and she moved the cart to the fourth row from the front, skipping us, and continuing to the front. What? Then I heard as less and less options were available. They were now out of this, now out of that. All I could hear was the cheese pizza. Sigh, ok. Eventually she made her way to the very front, then came back to the row behind us. I had heard wrong - they weren't out of everything but cheese pizza, they were out of every meal. All they had left was an expensive cheese platter.We each got that and scarffed it down in seconds.

We arrived at Pearson airport over 30 mins early. That was good. Our luggage waa not released from the plane for almost an hour. That was bad. Got our car, and drove back to my father-in-law's and arrived home after 8pm starving and no food in the fridge. We took the quickest and easiest option - Pizza Pizza down the street. We got a pizza with pepperoni & bacon & Italian Sausage and an order of breaded wings, medium sauce on the side. 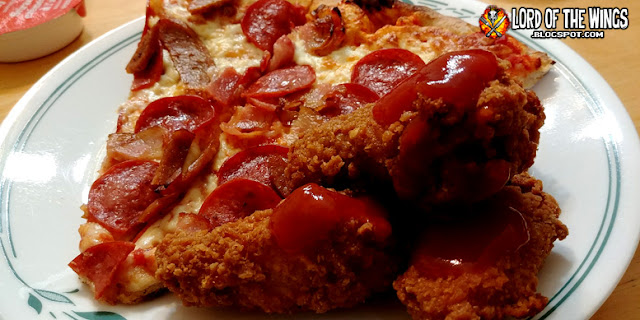 It was the best meal ever.
Posted by Lord of the Wings at 2:32 pm