THE THIRD - Ottawa ON

One of the things I love about social media is the ability to connect and learn. Not long ago, Instagram connected me with wings, and that's awesome. 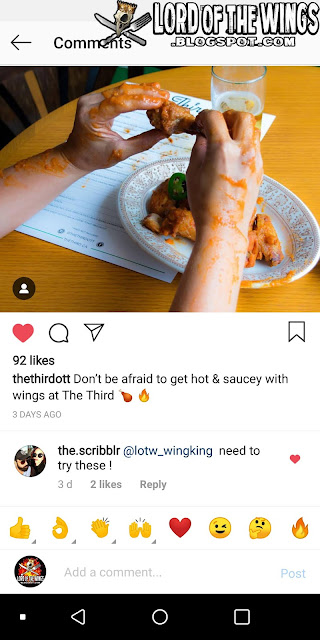 @the.scribblr tagged me on The Third's post about their wings telling me I needed to try these. I mean, look at that photo! Those are some very saucy wings that look spicy! I'm not sure if @the.scribblr had tried them before and thought they were good, or just saw the photo and thought I should try them, but thanks for letting me know!

I had heard about The Third before, but had never been. All I knew was that it was a place serving scratch made, simple pub food for reasonable prices, with a minimal approach for portions. Well, now they were on my wing-radar to try. 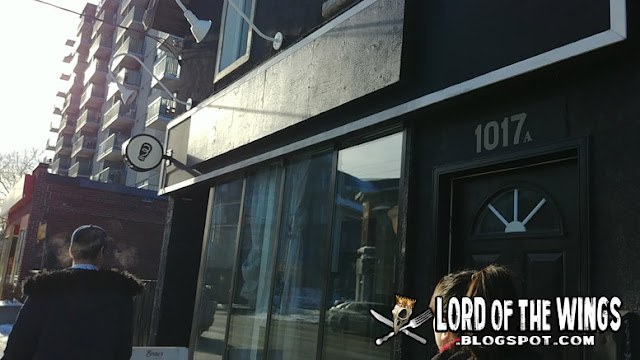 So I went out to try them like that week. The Third is in the Hintonburg area of Ottawa, which I recently moved away from. I had a rough idea where they were, but driving I could not find the location. That's because there is no sign. There's a big black board where a sign would go, but nothing. I did see a sandwich board out front, and I parked out front (free parking, sweet). 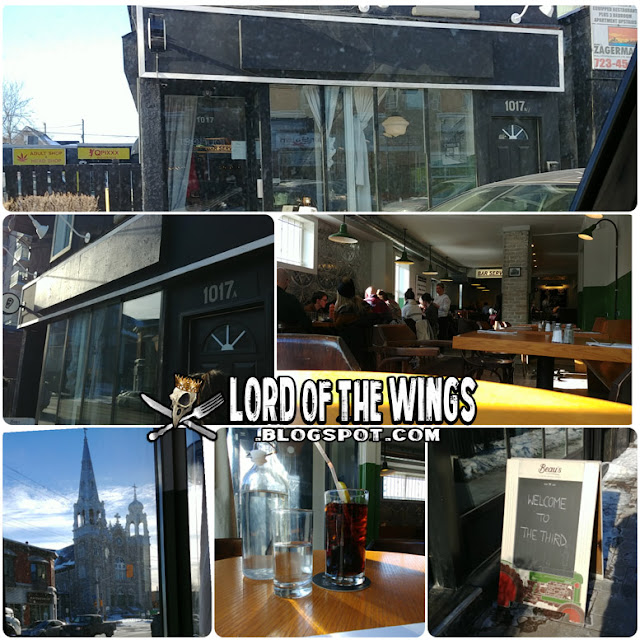 The place isn't big, but arriving at the last few minutes of the lunch hour, the place was packed. The waitress said for me to grab whatever seat I wanted; there was a little table in the front window so I grabbed that. That waitress was Ashley, and she was great. Like really great. Super friendly, informative and really really made me feel welcome and at home. Very genuine. She brought me a big bottle of water to start, and to speak about the service, another waitress during my meal would just randomly check on me and pour me more water (even though it was self service), all while Ashley was checking on me too (without being intrusive or too frequent). It was just awesome service.

I looked around the place and notice that the vibe was very nostalgia based. Tin walls, old chairs, and lots of black and white photos of the neighbourhood. I actually sat under one photo that Ashley explained was The Third, waaaaay back when it was (the last) Chinese hand laundry.

Oh, if you are wondering about the name, The Third, because I was and completely forgot, it has to do with the mission of this joint to be a community hub:

"The Third Place: The neutral public places where people can gather and interact. Unlike the first place (home) and the second place (work), the third place allows people to put aside their concerns and simply enjoy the pleasure of good company." 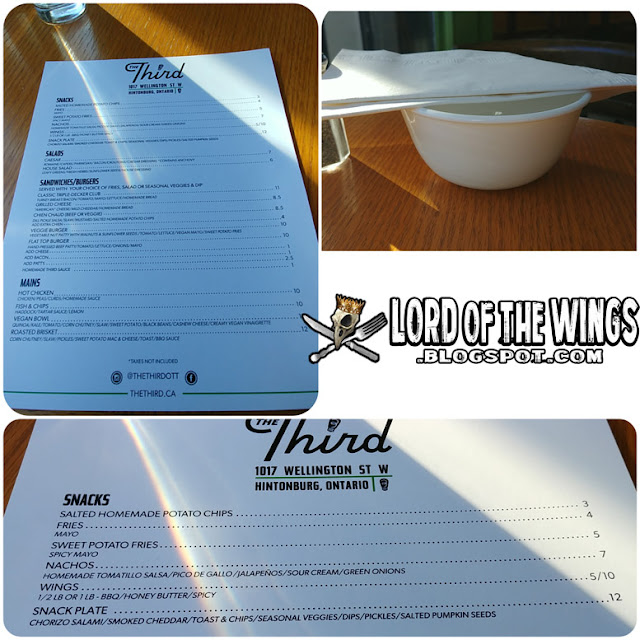 I looked around at other people's orders and their food looked good. The menu seems like it should be more hipsterish than it is, but it's all pretty inexpensive and sounds good. I mean the nachos looked good, I saw tasty looking burgers, even fish and chips that I would down. But I was there for the wings. You'll find them under the snacks. 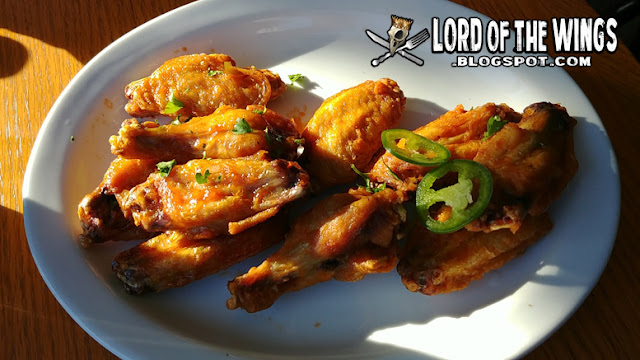 Ashley helped me with my sauce choices (which I will get into later) but it didn't take long for me to have my wings. 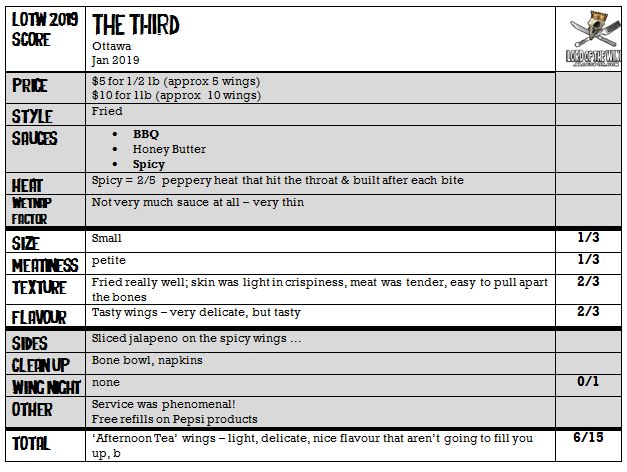 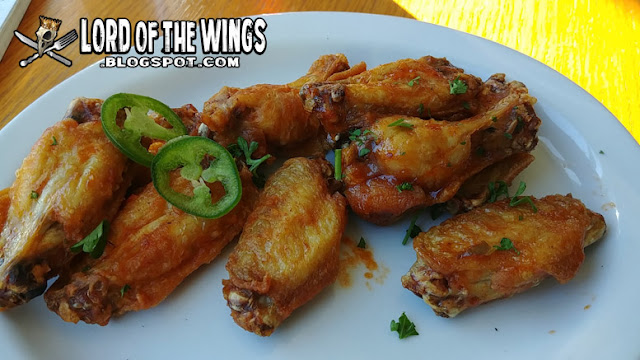 The wings came on a simple white plate, but I did get a bowl for bones and extra good quality thick paper napkins for clean-up. They come in either 5 piece orders or 10 piece orders. It doesn't come with any sides like dips, veggies or fries although the spicy wings did come with jalapeno slices if you really want to stretch the definition of 'side'. 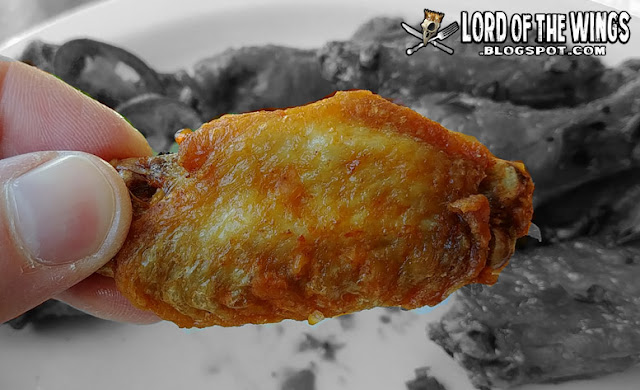 When my wings first came out, I was disappointed.  I mean they were plated nice and they looked good, but, well they were really small and pretty dry on sauce. On the size scale they were small length, width, height. They weren't meaty wings either. I've had smaller wings, but these were just a small wing. 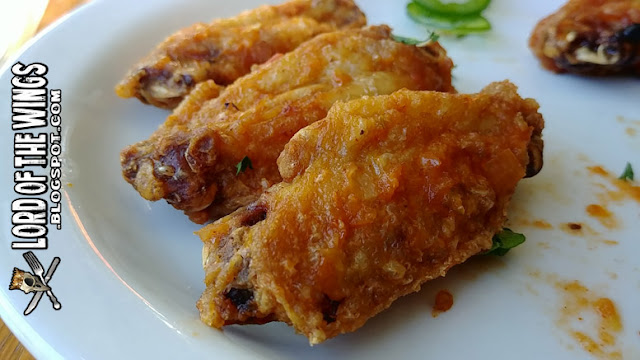 Now I will say that these wings were fried very nicely. The skin was nice and crispy. The meat was tender. The bones pulled apart nicely too. It was small, but it was cooked just right.

As previously mentioned, they was very little sauce on them. When I think back to that Instagram photo, the guys arm was covered in sauce and I know it's a commercial and it's purposely exaggerated, but it was a let down. Go scroll back up and look again. Both flavours I went with were equally not sauced that much. I mean my fingers did get wet and my napkin was needed, but there was just soo little sauce that made me sad. 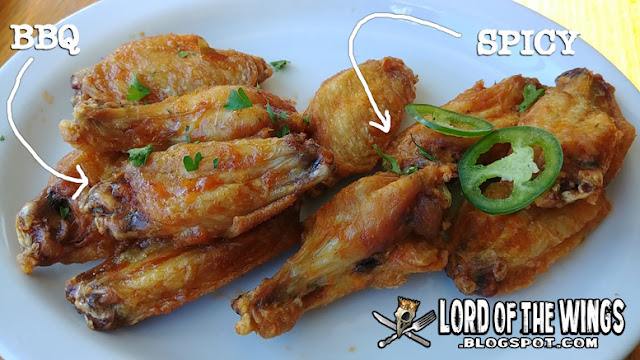 The Third has 3 sauces to choose from: BBQ, Honey Butter, and Spicy. I asked Ashley about the sauces. She let me know that they were all scratch made in house. That sounded good. I asked about the Honey Butter and she told me that it was like Honey Garlic without the garlic. That didn't really get me going but I wouldn't say no to them. Ashley thought about it and said I could go with 5 BBQ, 5 of the Honey Butter, then get the Spicy on the side. I like that she was thinking about it and trying to maximize my experience. I decided to skip the Honey Butter and went with 5 Spicy and 5 BBQ. When they came, the only way I could tell them apart was that the spicy had jalapeno slices on them. 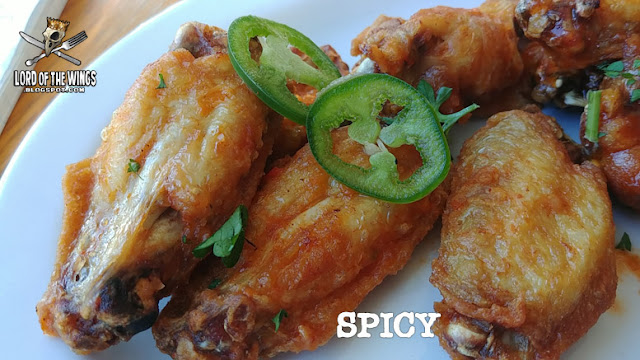 What sauce I could see was orange in colour and where it had pooled, it was mushy looking. The flavour was light, bright, with a heat that builds. At first I was like there's not much heat, but as you eat them the heat builds. It's peppery and really attached the top of my mouth and throat. It was hot enough for a sting, but a heat wimp could eat these and feel like they were eating something really hot. But that's why it's Spicy and not Death wings.

I asked what was in the sauce Ashley told me it was finger chili's and habaneros (hence the orange and mush) but she did say the heat does change depend on the batch of chilis. She also mentioned it depends on people's tastes, as she mentioned how she's someone who can down a bottle of Frank's, while others really suffer. 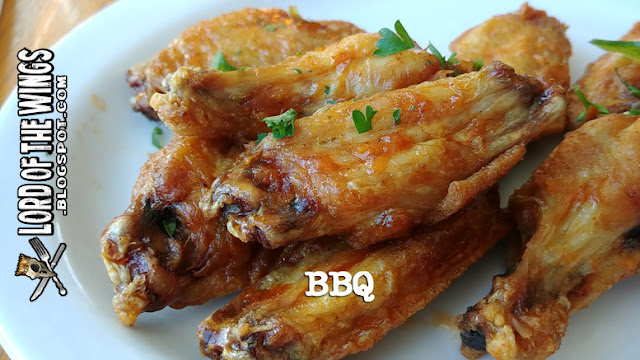 This sauce was really really hard to describe. The sauce was tasty, but because it was so thin it was hard to really identify. It was sweet, and I'm pretty sure there is honey in there. That's what I can tell you. It's not bold, or dark flavoured like a Texas BBQ sauce or vinegary like a North Carolina sauce. It's its own thing and it's good (it was nice to alternate between spicy and BBQ), there's just not much of it. 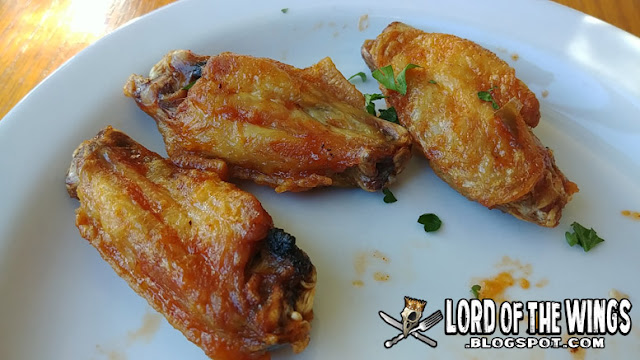 I did like these wings, but these are not feasting wings. These are "Afternoon Tea Wings", that you have at 2pm with a cup of tea and you nibble little bites with little hints of flavour. The wings are dainty and feel artisan in their approach. 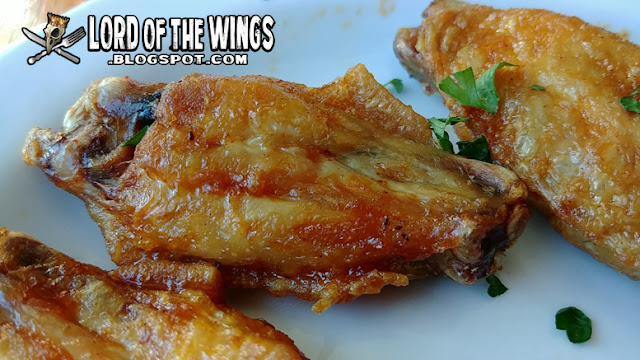 The Third did not score well on this venture; the wings were small, the sauces were not generous. However, what sauce was on the wings was good, with Spicy giving some heat and BBQ bringing the sweet. The wings were nicely fried and tender. These 'Afternoon Tea Wings' are dainty but tasty, and I appreciate the homemade sauces, I just wish there was more. The service was excellent and I would definitely go back to sample more of the menu. 6/15 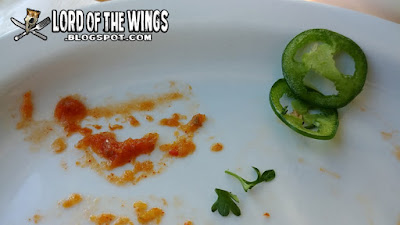 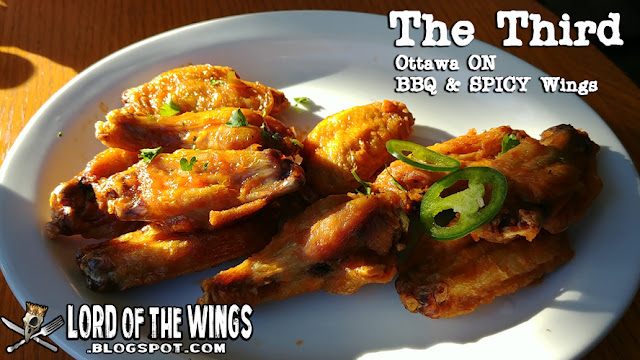