Back in 2014 I tried Mary Brown's Chicken & Taters for the first time. My friend Helen, a displaced Maritimer here in Ontario took me and I had some good wings. I had fully planned to do a review, but life was crazy back then and I never did. But recently I found the photos and presented a Lost Review because I had heard about a new Mary Brown's opening up in nearby Kanata, and I thought I would compare experiences. 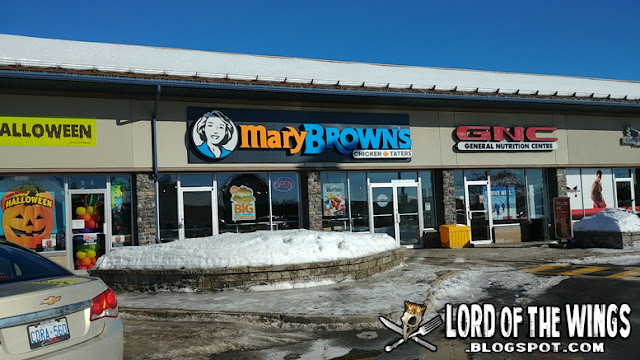 Social media was a buzz with a new Mary Brown's opening, and Maritimers here in the capital were salivating with anticipation of having their favourite fried chicken and potato wedges. Following their obsession online, it seemed that the store that opened in February was crazy busy with big line ups. I waited till things died down and decided to check them out.

Also, I was getting ads from Mary Brown's on social media about Buffalo chicken tenders. That really piqued my interest and it was a limited time offer, so now I had to go. 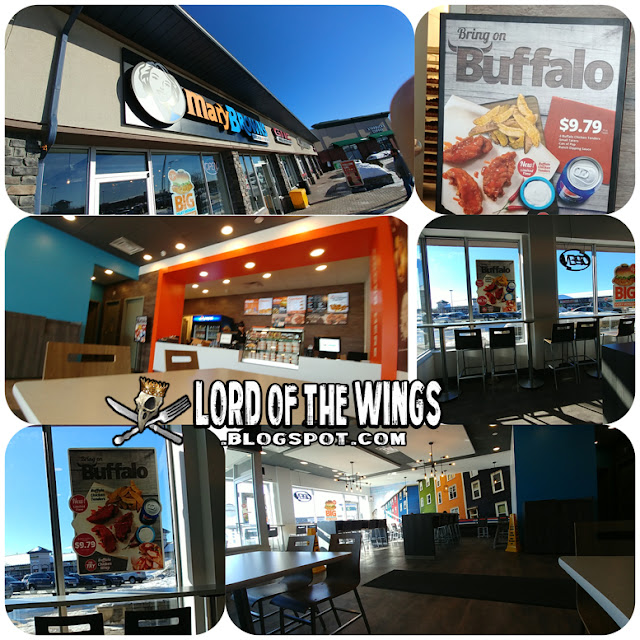 The new shop is in the Kanata Centrum - a big shopping zone that is basically Kanata aside from suburbs. The place is brand spanking new: clean and shiny and very fresh feeling. There's lots of seating inside, lots of space, and bright colours and window space. I went after lunch time so it was quite quiet. There was only 1 patron eating, and one staff member on break. More came later, but for a bit it was just me.

I noted the Buffalo tender combo posters upon entering, and I walked to the back where the ordering counter was. I was impressed because there seemed to be a small army of staff running around. I was the only one at the counter, and I was taken aback by the staff member who took my order. She was young, and she didn't give a damn. I expect that at a place that has been around for a long time, but usually when a place is new, the staff are excited. She was not. I pointed to the sign and said I'd like the Buffalo tender combo. She asked what kind of dip I would like and I asked what kind were there? She kind of listed off her head a few but I picked ranch. I also added 5 wings to the order. She asked if I wanted a dipping sauce for that, she said there was Buffalo, Ranch, something else. I went, oh Buffalo. She then gave me my receipt and I waited for my order. 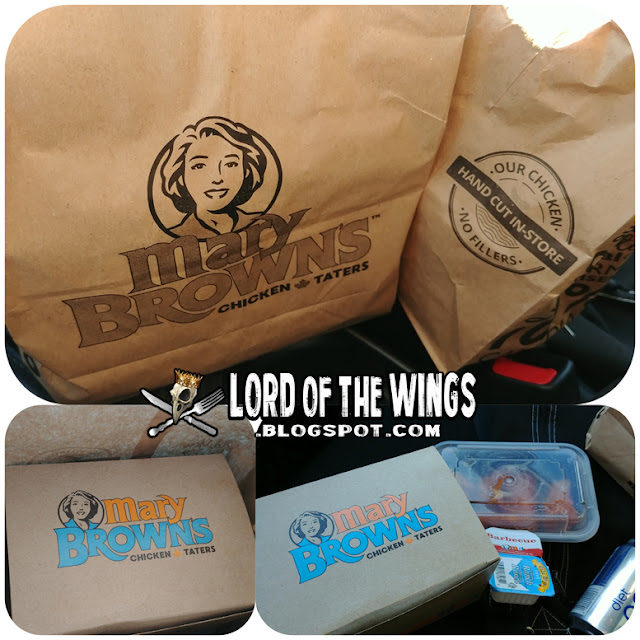 I waited for about 10 minutes, and I watched as who I thought was an older manager, putting my order together. She called my name with one big bag and a little bag. I asked if it came with a drink (as the combo did, but the girl didn't ask me what I wanted) and the woman said it was in the bag. I opened the bag and it was a Pepsi, but I wanted a Diet Pepsi, so she exchanged it for me. I should point out it's a can of pop, not a fountain drink.

I went back to the car with my order very excited. I sat down, got everything set up, and opened the bag. I found the wings and put them aside. I pulled out the tenders, and I opened the box. Inside, was just plain chicken tenders. 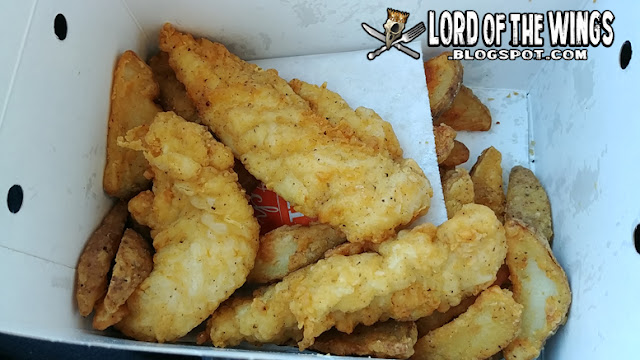 I was really disappointed. I also noticed that there was no Buffalo dip but a BBQ dip in the bag. I checked the receipt and there was nothing about Buffalo tenders. Now I normally not the kind of guy who complains or sends food back, but I came to do a Buffalo tender review. I went back into the restaurant and now there was a good size line. The girl that took my order was going on break, but saw that I was coming back in with an order and avoided eye contact with me.

The woman who had packed my order saw me come back in, and I explained calmly and friendly that I didn't get the Buffalo tenders or the dip. I tried to give the original tenders back to be sauced, but she re-ordered a new order and told me I could keep the original tenders because they screwed up. Then she asked if I wanted a side of Buffalo, because as it turns out, there is no Buffalo dip as the girl had suggested, it's just the sauce the wings come in. The girl had led me astray and now it was confusing and embarrassing dealing with the very competent employee. The lady got the order and asked if I wanted a side of the Buffalo sauce but I said no because I didn't want to cause more conflict. She also offered a coleslaw or some other side to make up for the mix up, but I declined. I really appreciated how much she went to make things right with me. 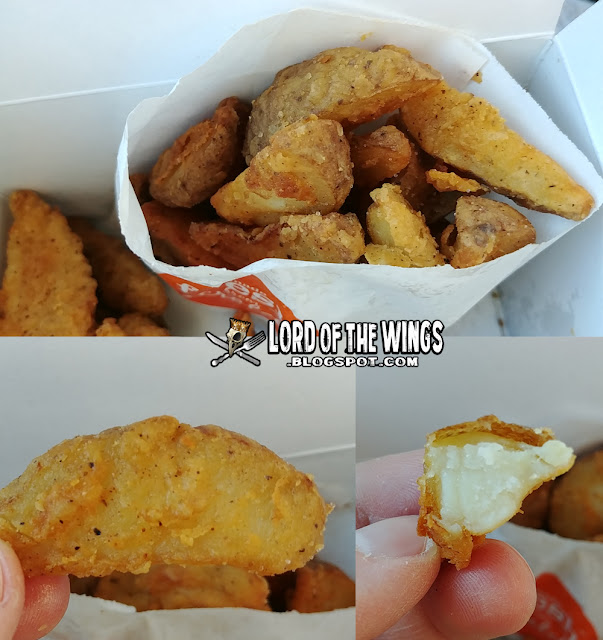 Back at the car, I tried out the taters first. The combo comes with a small order, but these were overflowing from the bag and into the box. These are essentially small small small potato wedges that are breaded and fried. They are, ok. Texture wise they are good - crispy outside, fluffy potatoes inside. But they are mighty blah. Actually they have a bit of a floury flavour. I mean I still gobbled them down and dipped them, but they weren't as amazing as people seemed to claim. 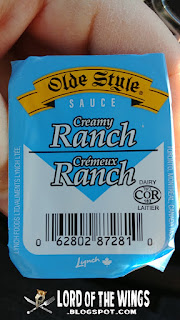 Mary Brown's uses Olde Style sauces as their dips, and in this case it was ranch. The ranch was good, and reminded me of the base for a commercial tartar sauce I used to love as a kid. And hey, it's kosher! 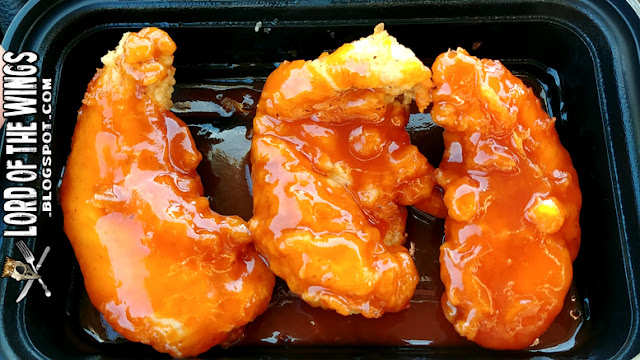 I moved onto my freshly made Buffalo tenders. These looked and smelled really good. 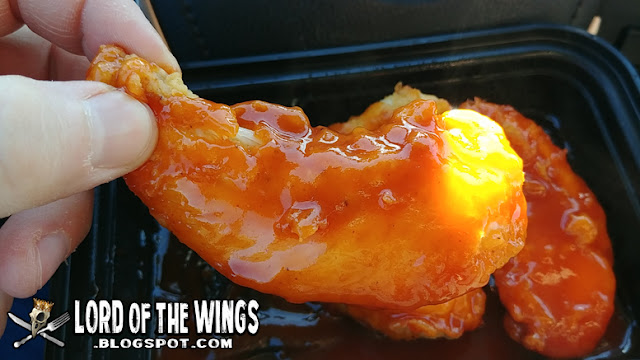 Size wise these tenders were pretty big. They also weren't pre-cut or formed tenders but real chicken breast pieces. They are lightly breaded and were lightly fried, which meant they weren't as crispy as I would have loved, but they were good. 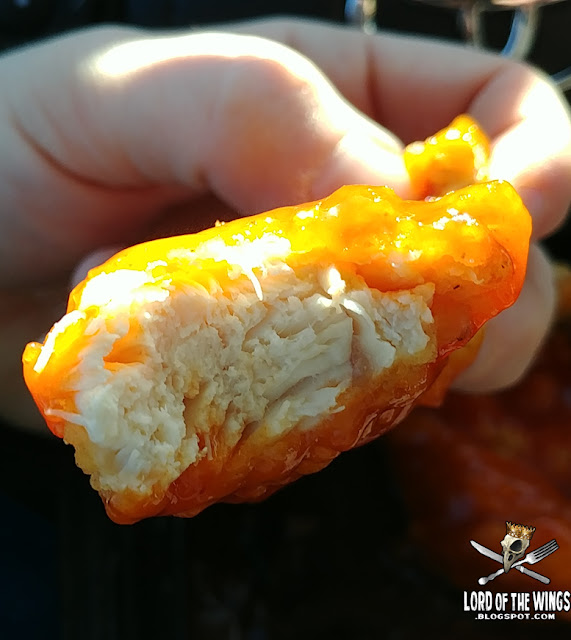 The meat was very tender. Very. Tender. On a side note, the original tenders that were not sauced were the same and were good on their own (but I did end up throwing them in with the sauce and tossing them). 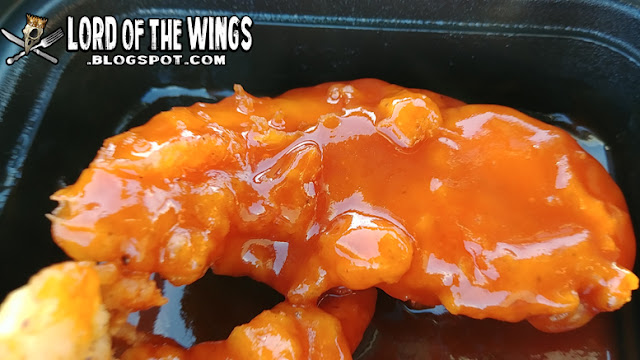 The sauce on these were described as Buffalo, but it's not really Buffalo, but as its the same sauce as the wings I will leave it for the wing review portion. I will say they came VERY saucy. I like that. 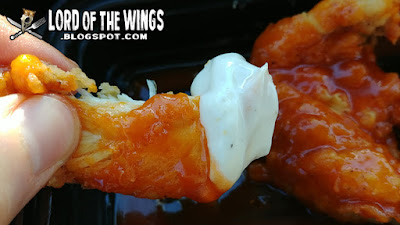 The flavour all around was good - these were great 'boneless wings' which thankfully they don't describe these as. And the ranch was a great flavour booster for these, but it wasn't needed. 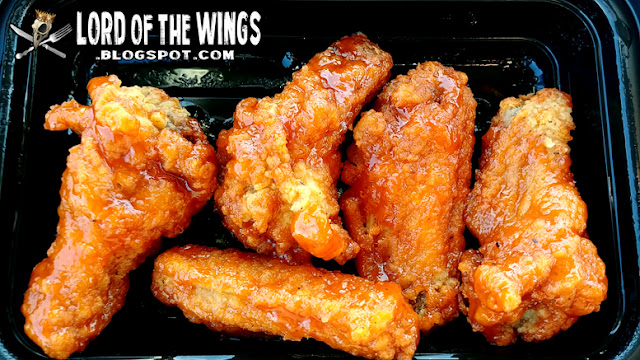 So the tenders were pretty good, but how would the wings fare? 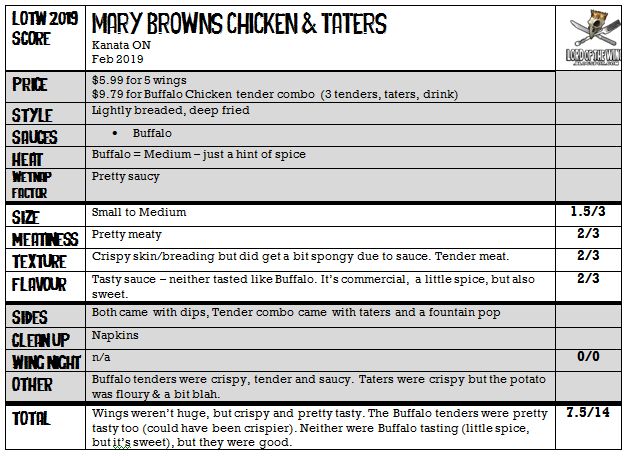 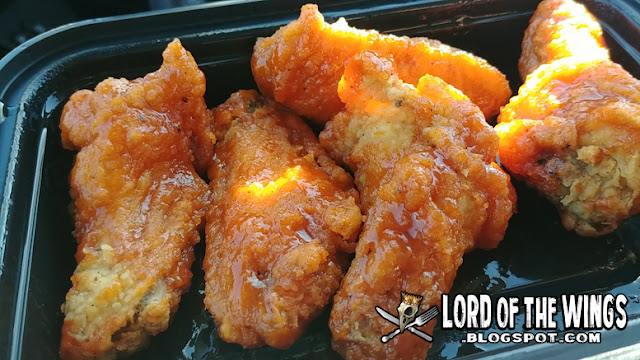 There is only one size choice of wings, 5 wings, which are found under snacks on the menu. 5 wings are 5.99 but if you want to upgrade to a combo for $3.50 more. It also came with a dip, and I got more ranch. 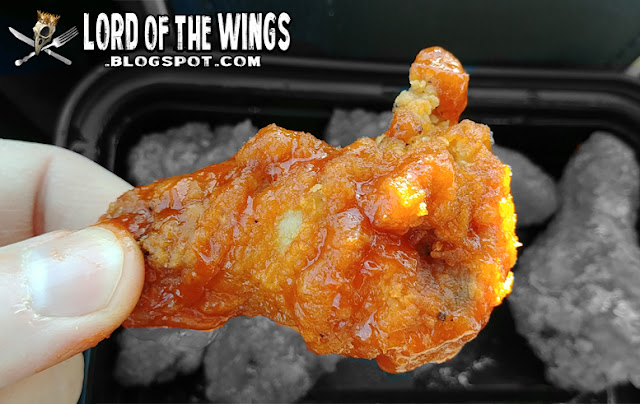 These wings are all about the same length, basically a medium. But the chicken on some of these wings were very meaty, which makes up for the smaller length. 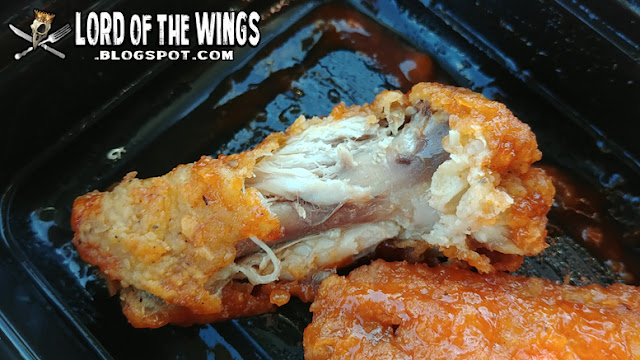 They are lightly breaded/dusted like the tenders.The skin was crispy, but after a bit the sauce gets to the skin and creates a slightly spongy texture. They weren't bad this way, but as always it's best to eat them as quickly as possible. The meat was pretty tender though. Actually super tender, with the bones pulling away easily. 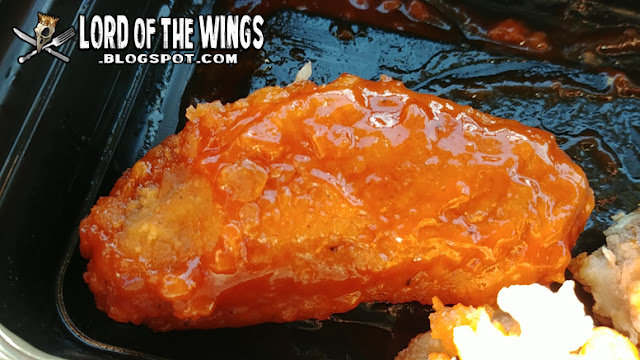 The sauce on these wings is labeled as Buffalo, but this is not a Buffalo sauce. It's the same sauce as the tenders. It's a hot sauce, it's commercial tasting which is not bad, but it's obviously not a scratch sauce. It's syrupy and slightly sweet, so I'm sure its got high fructose corn syrup in it. There is just the slightest sting but these would be edible by all level of heat or non-heat eaters. They were also really wet with generous amounts of sauce on them. Make sure you have a napkin or two. 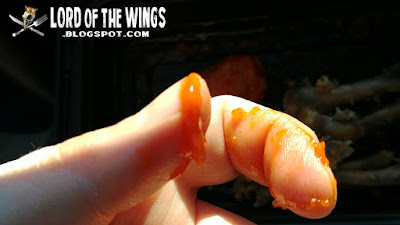 I had some good take-out at Mary Brown's. The Buffalo Tenders were really tender, sauced well and really good. The wings were also really tender, crispy and sauced really well. You aren't getting a Buffalo sauce, but you get a tasty sauce. The taters are good but don't live up to the hype. I would get it all again (if the Buffalo Tenders weren't just a limited time offer). I have one negative customer experience with one staff member, but that was totally overcome by another great staff member. 7.5/14 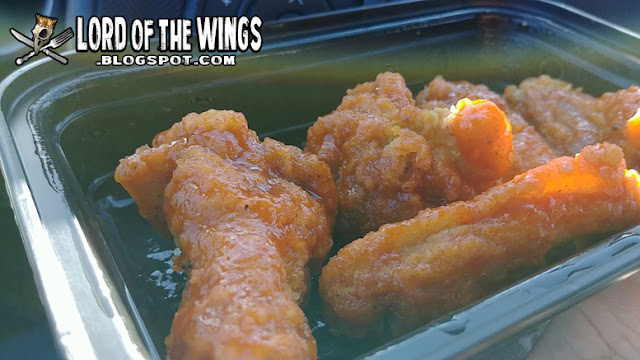 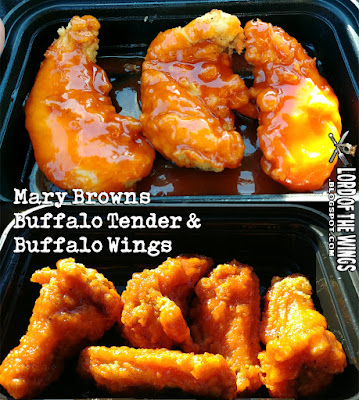