I don't make it to the Vanier* area of Ottawa often, but when I do I'm always on the lookout for more eateries and wings. I've been to the Montreal Square strip mall a few times, where there is a McDonald's, a shawarma place, a pizza place; the usual fare. They also have a little dive place that looks like a coffee shop called Dynasty Cafe & Bar, but I never gave it much notice because I didn't take it for a wing joint.

*I have been informed this area is not technically Vanier ... maybe Glouster 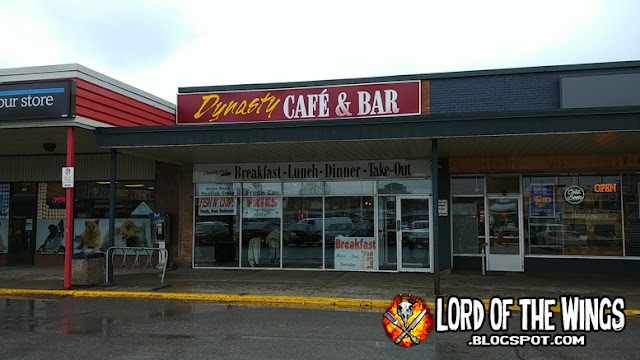 Then a few weeks ago, one of the foodies in Ottawa I follow on Instagram (@getfatwithlabz) sent out a shot of an onion ring poutine that looked pretty good. That led me to search for Dynasty itself, which has it's own Instagram account (@dynastycafeandbar) and low and behold, they had chicken wings!

Dang they looked good. Well that was it, it was time to try some wings! 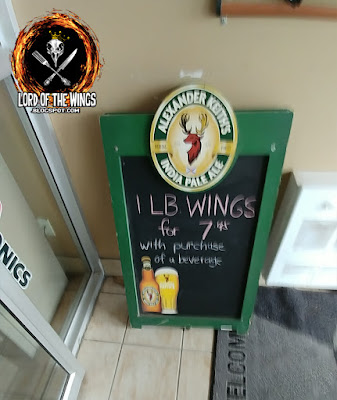 I walked into the cafe out of the rain, and noticed this message board in the entrance - 1lb of Wings for $7.95 with the purchase of a beverage. Nice! Or so I thought. 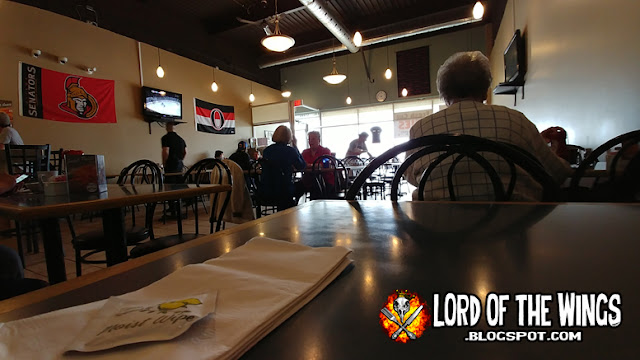 The inside was much bigger than expected with a lot more seating than I thought it would have from the outside. It's mostly table sitting, but there is a bar. One wall has no decorations except for a TV, the other another TV and Ottawa Senators hockey flags, and another wall has specials on it. It was really dark inside. I don't know how to really describe the atmosphere here but it was kind of hum drum.

The crowd on this Thursday noon time was overwhelmingly elderly and I'm pretty sure all French. The staff spoke French with everyone, but I must have stuck out clearly because they just started speaking English with me. But I was prepared if I had to be; chicken wings is 'ailes de poulet' in French, FYI. 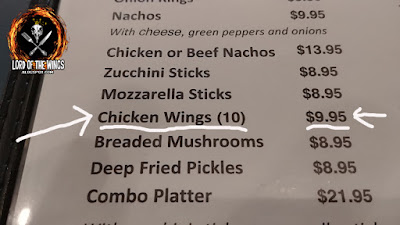 The menu is pretty diner standard - fried apps, club sandwiches, fish and chips etc. Of course I was looking for wings. No flavour description though. The only waiter, a young guy who seemed to be in charge but was very friendly, came to take my order. I asked about the sign out front for the wings, and he told me the deal was only in the evenings when the board goes out on the street. Dang. He also wouldn't clarify a specific time that the special is, only every evening. He ran through the flavours, "hot, mild, medium, BBQ, honey garlic . . . or we can mix them if you want". I was good just trying the hot. 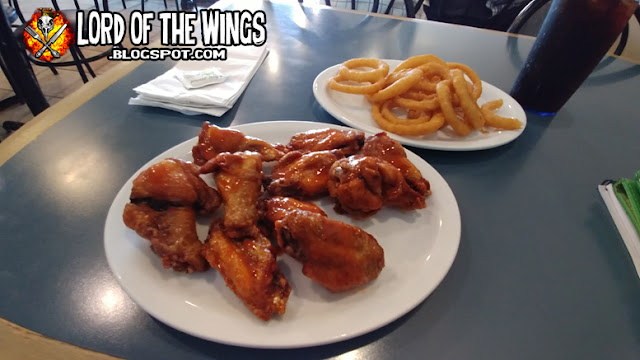 A few minutes later he brought me some napkins and a wetnap. He also brought me my drink, and a little bit after that my meal. It looked pretty good! 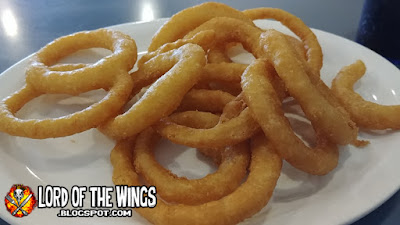 I also got a side of onion rings. The pics of the onion ring poutine looked good (which is not on their menu, must be a special request by regulars), but I didn't need that much for lunch. The rings were good. I would have liked the rings fried for a few minutes more to be really crisp, but these were still good. 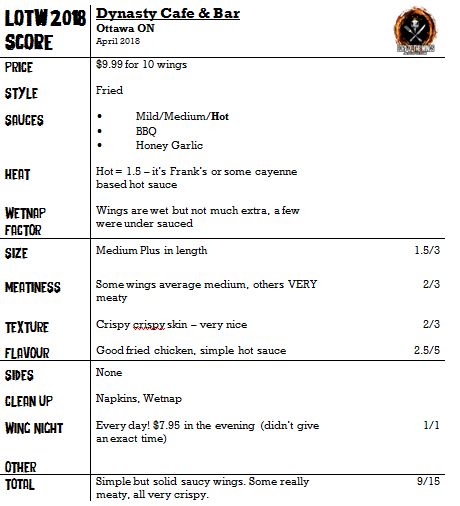 Wings only come in an order of 10. The wing special says they serve the wings in a pound. I don't know if the 10 wings are a pound or not. 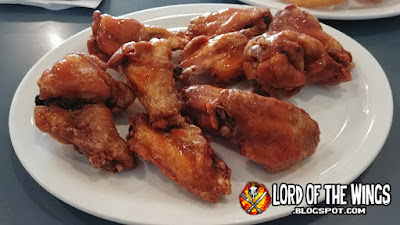 The plate is served up just straight wings - no celery, no carrots, no dip. 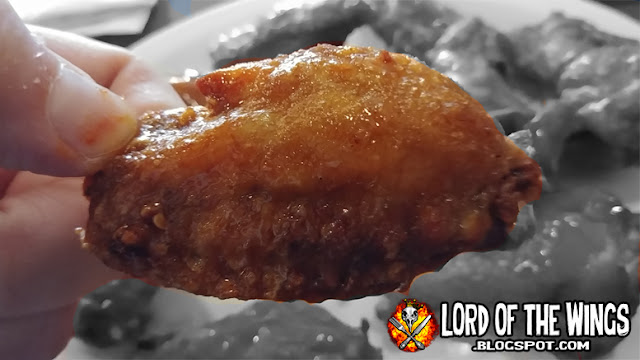 The length of these wings were a medium-medium plus which means they are a decent size. On the meatiness scale, they were mostly medium but there were some VERY meaty drummettes. They were so big, the cook has taken a knife and cut open the meat, leaving a deep cut in them. I'm pretty certain this was done to ensure the chicken cooks evenly or at least, completely. It looks odd to have this big gash, but I'd rather the unusual gash to under-cooked wings any day. 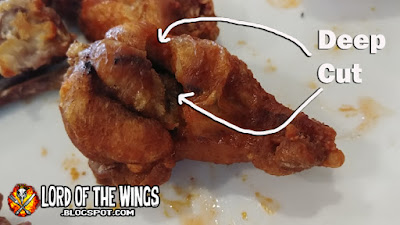 The wings are deep fried straight up, no dusting or breading going on. The skin was nice and crispy - cooked just right and they held up to the saucing of the wing. 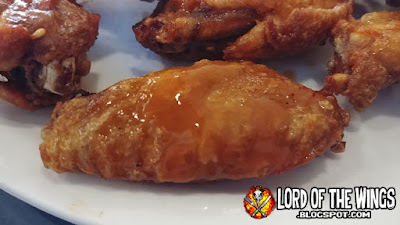 The sauce is simple cayenne based hot sauce. Probably Frank's. So it's nothing special, but it's good. There is enough sauce on the wing that they were pretty wet, but a few were under-sauced as I like a lot of sauce. I was expecting the kind of saucing I saw in their Instagram post, but the wings were good at this level of sauce. 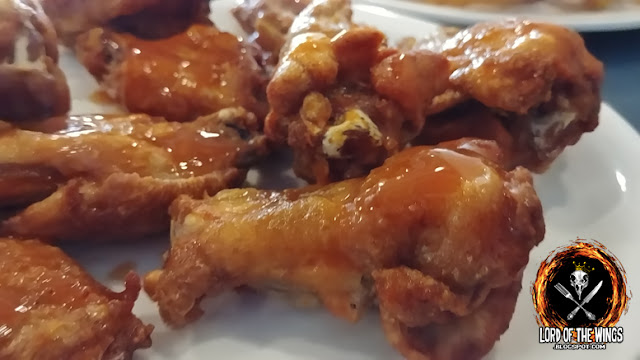 The Dynasty Cafe & Bar is a no frills, relatively cheap place to eat. Their wings are simple, but they do them right. The skin is crispy and the meat tender - the chicken alone is good, and sauced up with hot sauce, these are basic, but tasty wings. 9/15 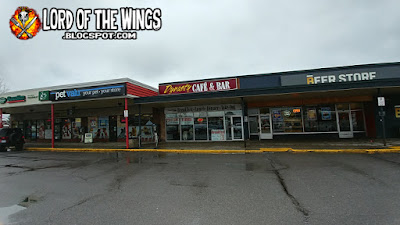