When something gets stuck in my head, I can get pretty stubborn. When it comes to chicken wings, its even worse. 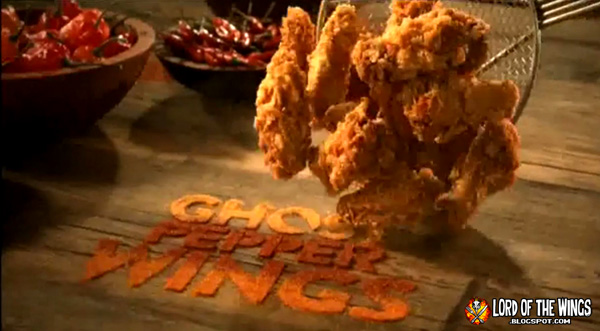 Last year, Popeye's introduced Ghost Pepper Wings, and I was super psyched to try them. I went to a location, and it wasn't advertised and I ended up just getting some chicken. It was good, but it wasn't what I wanted. Then I didn't go back to Popeye's.

So when I saw commercials on tv stating that the Ghost Pepper Wings were back, I got over my unofficial boycott mood. For days I was thinking about these wings and when I could get them.

The add has the Popeye's spokeswoman Annie talking about the Mystery of the Ghost Pepper. This ad campaign came out just before Hallowe'en so the marketing is perfect. 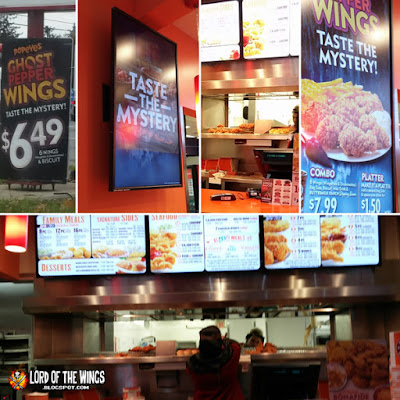 I went just before the lunch crowd, which was good because they had to specially make the ghost pepper wings. They warned me that it would take about 10 minutes, and they were right. 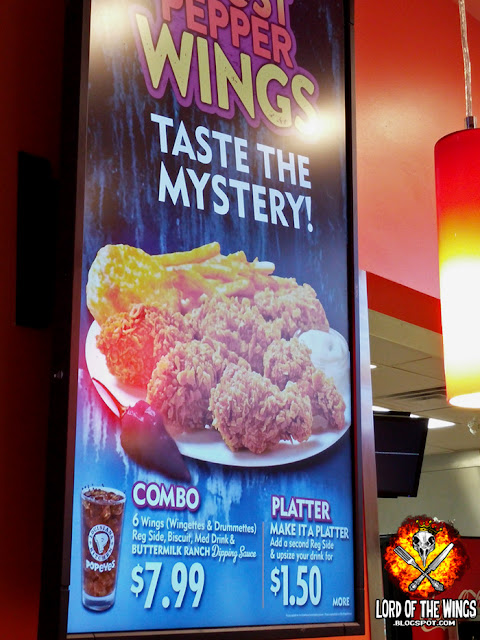 There was a wall mounted monitor that kept flashing a cool, eerie video of the "Mystery of the Ghost Pepper Wings". I love this haunted bayou feel to this add campaign. What is interesting (especially in retrospect) is that the emphasis is on the mystery of the flavour, and not the heat of a ghost pepper . . . 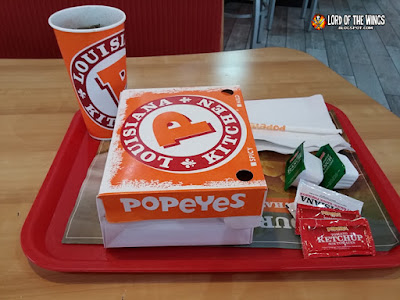 There was a steady stream of folks that came in and ordered and left while I waited. After I did get my order I filled my drink and by then it seemed both the high school and the senior centre was out for lunch. I grabbed a table and got to business. A note about the sides - I got fries, which are Cajun spice seasoned. They are very crispy and with the seasoning have actual flavour unlike so many chain fries. There was also way more than I could eat in my order, which was a plus - they over filled the little paper bag and just dumped them in overflowing inside the box. I dipped them in ketchup and their Louisiana hot sauce - which I usually eat with the chicken. Mixing it with ketchup makes for a good dipping sauce. Later I also dipped in the Buttermilk Ranch that came with the wings.

It also came with a biscuit. For me it's 50/50 on whether I get a fantastic, warm buttery biscuit or a stale, rocky puck at Popeye's. This time it was off, but some times they are heaven. 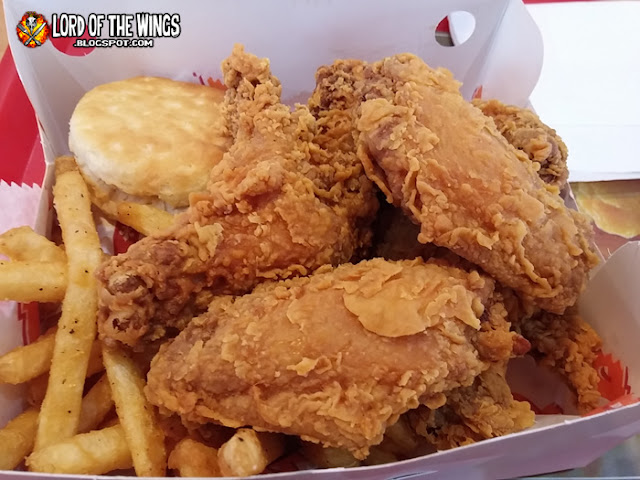 And let's be honest here, I'm not here for the biscuits, I'm here for wings. 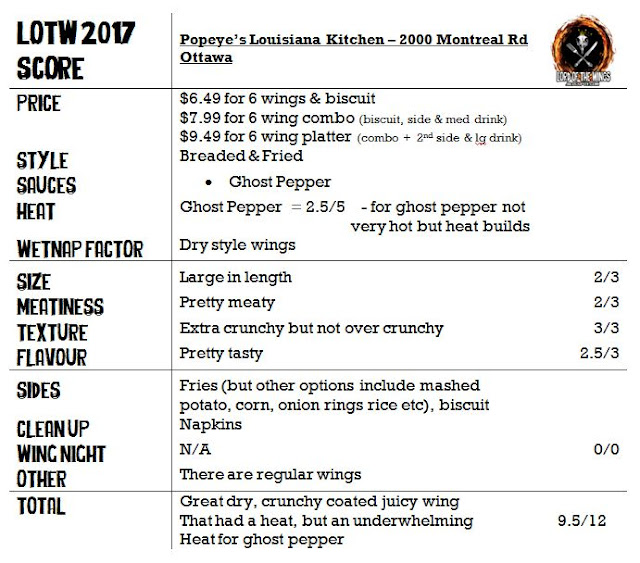 6 didn't seem like a lot of wings, but when I saw them putting them in the box, I got excited because I thought they gave me extra (you know, for having to wait around), because the box seemed to overflow. Nope, I got six, but that was more than ok. 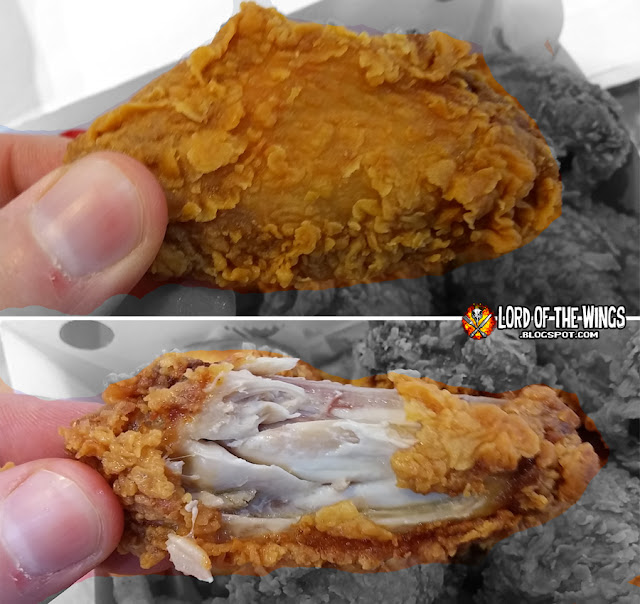 The wings are a large to medium-large in length and a large in terms of meatiness. Very meaty. But you have to break through a thick, crunchy coating. Now if you don't like breading, these wings aren't for you, but I would urge you to reconsider your position. The crunch gives a great texture, but it's also seasoned well so it's flavourful too.

The problem one has with breading is that they can be overcooked and dried out. Not these wings; they were plump and juicy. I bit into my first wing and the hot juices almost burnt me. 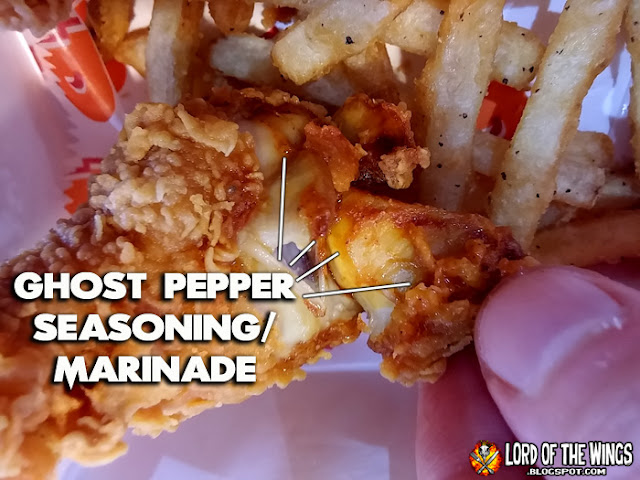 When I opened up the box, I looked at the wings and was a bit confused; they looked plain and not ghost pepper dusted. I mean in the commercial they show their wings crashing into a pile of delicious looking spices. These didn't look spice kissed at all and I was contemplating going to the counter and getting in the long line up to question these wings (even though I heard the staff say to themselves several times,"ghost pepper wings").

I took a bite ... nothing ... no wait, there was this great spice flavour. Now there was some heat. It built and built, flavour and a bit of heat. It wasn't very hot, but it was a great dry burn heat and taste. When I ripped apart one of the pieces, I could see the spice marinade IN THE MEAT. It's not tossed in spice AFTER cooking, its marinated in the chicken BEFORE frying. This meant the flavour permeated the whole wing. 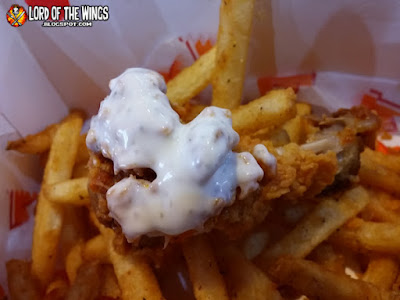 I really enjoyed the flavour, but I thought how with the crispy batter and marinated heat that this was the beginning of a great wing, it just needed some sauce. But as I ate more I felt differently. This wing didn't need sauce (I did get extra Louisiana sauce just in case) - it was righteous on it's own. Adding sauce would be good, but then it would cover up the peppery punch of the ghost pepper.

That being said, again, these were NOT spicy wings. I mean spicy, but not ghost pepper spicy. I've done ghost pepper wings in the past and it nearly ended my wing eating career they were so hot. These just had a peppery kick which heat wimps won't be able to take, but anyone who finds cayenne hot sauce mild will find these mild. But because they were a dry wing, they did go well with the Buttermilk Ranch they gave with it. I am not a 'dippist' usually, keeping wings pure on their own and leaving the dip for the veggies, but this made for a nice, cooling lubricant for this wing experience. 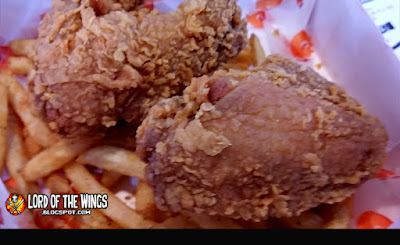 FINAL SCORE:
The taste, texture, and flavour of Popeye's Ghost Wings exceeded my expectations of what I thought they would be. It helps they came out fresh, hot and crunchy. The flavour is slow but like the heat it builds up BUT it never hits the heat of what I expect from ghost pepper wings. I wanted something with flavour and face melting heat. But I'll take a great tasting wing over face melting.  9.5/12 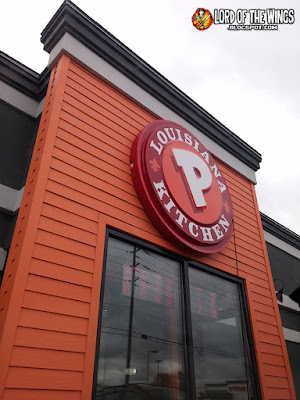