I've been waiting a long time to go to this place. 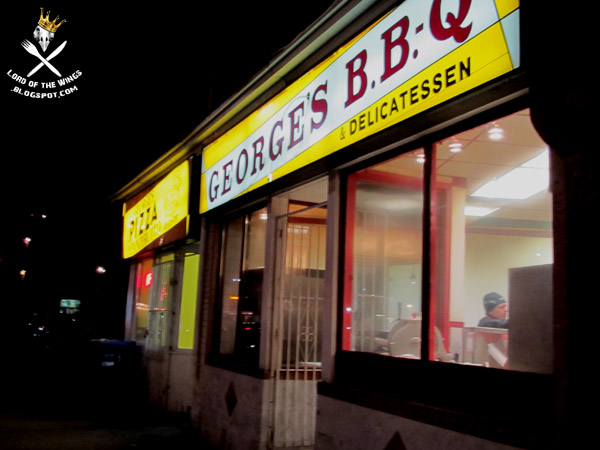 George's Deli & BBQ is one of those dive-y kinda places that I imagined had good food, but looks run down and has some shady characters. After rejecting a few other places, I decided I was going to get some chicken wing take-out and that George's was going to be the place. 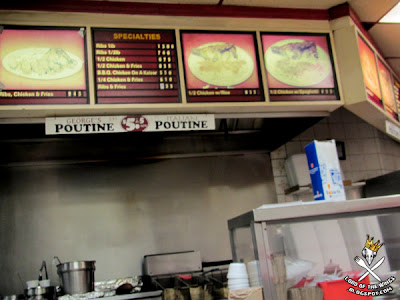 It was around 8:30pm on a Saturday and the place was empty when I went in. There are actually two store fronts, one is George's Pizza, and the other is the Deli/BBQ.  It looked like it was run by a 'Ma & Pa' elderly couple, with the man (was this George?) unloading the rotisseries and cooking in the back, and Ma dishing up and running the till.

Now I knew they had chicken wings. In the past doing research on George's I had seen an old menu uploaded (but now I can't find it) with it on. But when I went in, there was just the boards from the 1970's above the counter that had little on it. I started to panic . . . I mean the rotisserie chicken looked good, but I had my heart set on wings. I knew there was more than meets the eye, so I asked 'Ma' if they had a take-out menu . . . and they did. And it had wings. And all was good. Now you too can see their current (Winter 2012 ) menu. 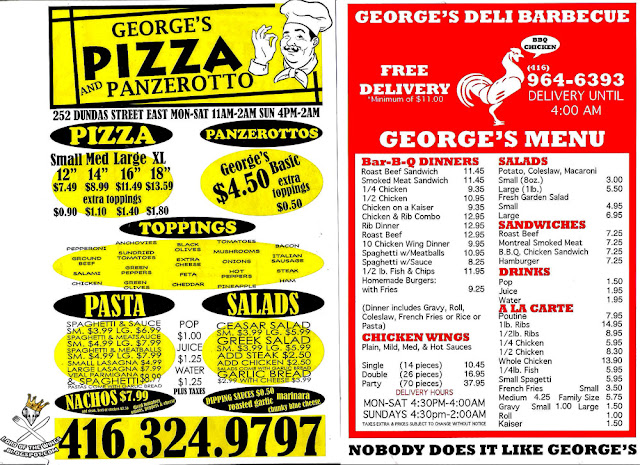 I ordered my wings and stood and waited. There is a bit of counter seating, but this place is all about take-out and delivery. Soon after I ordered, 'Pa' came in and was unloading the rotisserie that sits in the window. I counted something like 10-15 chickens and this was 8:30 in the evening. I said to him "wow, how many chickens do you go through in a day?" and he replied "not nearly enough" with a smile and a laugh. I didn't get my answer, but he seemed like a nice guy. 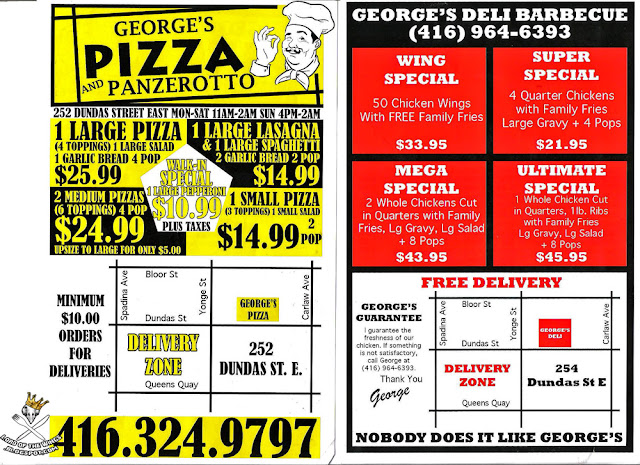 It didn't take long for people to be coming in for chicken. One guy was ordering a couple of quarter chicken dinners, another a whole chicken, another chicken sandwiches. All were getting them with fries and requesting the gravy . . . which sounded like it was good.

I may be a little judgmental, but they looked a little sketchy. Ok a lot sketchy. But everyone seemed to know 'Ma & Pa' and all were friendly. This was a truly neighborhood favourite. I was also really surprised by the amount of people coming in for chicken at this time. 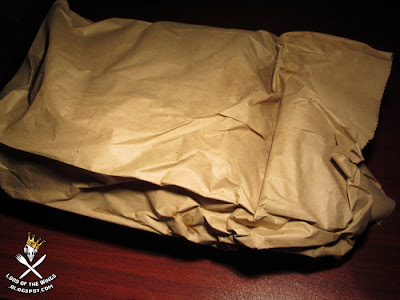 I watched 'Ma' take out my wings after frying for about 15 minutes, toss them in an old feta cheese bucket and pour a lot of Frank's hot sauce from the commercial sized jug. Into the Styrofoam container and into a bag and I was off. They smelled great, and I knew it wasn't just me because I overheard people on the streetcar and people in my building's elevator commenting to one another about the great "chicken smell" or "mmm something smells good." 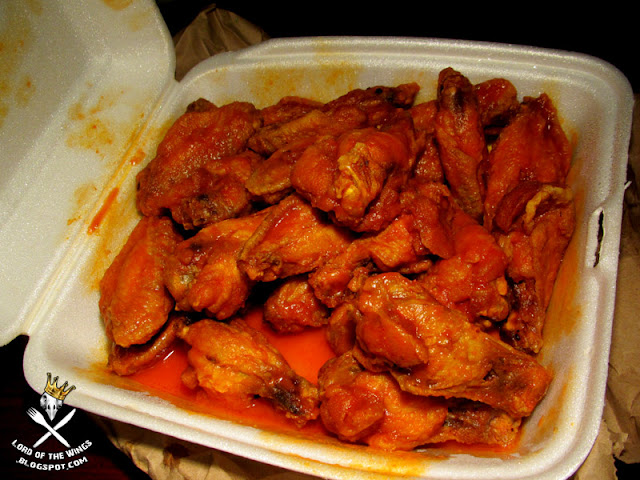 I rushed up to my room, opened the container - and took a moment to take in the wonderfully orange-y/red colour, the warm steam rising up, the vinegary spicy smell. My senses were alive. But what about taste? 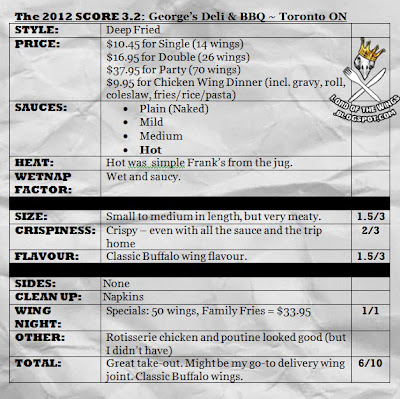 I was hungry and ordered a Double - 26 wings. It seemed like a good deal, but I feared that the 26 wings would be absolutely tiny. 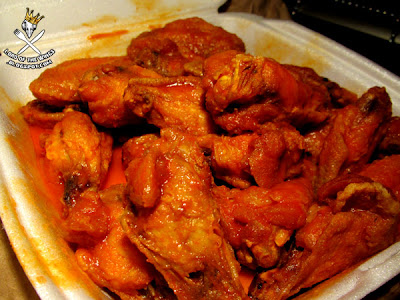 The container held a bounty of wings, The wings are straight forward Buffalo wings - non-breaded chicken deep fried, and tossed in Frank's. They were quite saucy with sauce to spare at the bottom.

The length of the wings ranged from small to medium - but the chicken meat was quite thick. The skin was crispy, the chicken tender. 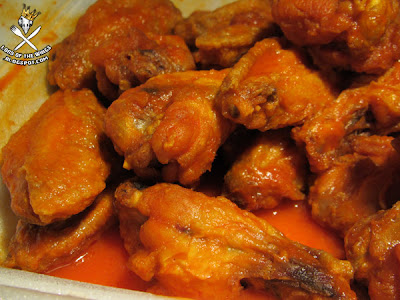 As I mentioned, the sauce was straight out of the jug, but it was good. I'm curious how they do Medium or Mild sauces if Hot was straight up Frank's . . . 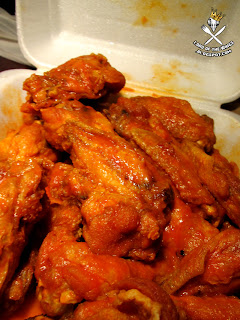 FINAL SCORE: This is a local place I will support again. I'm pretty sure this is my new go-to take-out wing joint. The price was reasonable, the service friendly. Yes the neighborhood is rough around the edges, I could see this place was popular for a reason. The wings themselves were slightly small, but big on meat. Crispy skin, lots of sauce - these were good Buffalo wings. At some point I will try the rest of the chicken besides the wings . . .  6/10 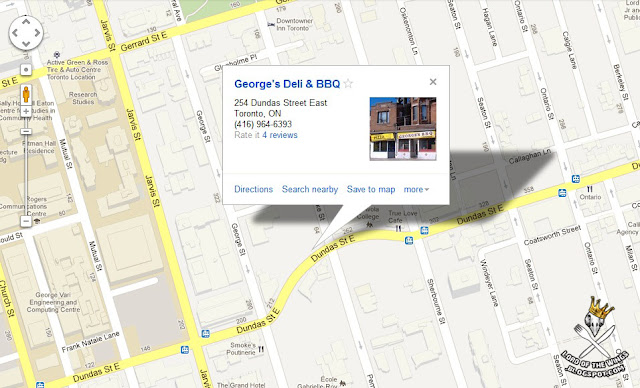 Dives do make great food sometimes. Sketchy folks and all ;)

@Chris - that was what I was hoping with George's, and the gamble plaid off!

They don't come with any mayo or sauce but you really don't need it, super tasty and moreish little bites! Food Truck Wedding Los Angeles