The Burger's Priest ~ Toronto ON

I have been wanting to go to The Burger's Priest for a long time now. I have heard how they are one of (if not the) best burger joint in the city. The Burger's Priest (TBP) isn't close to me either. So I set out to try their burgers. 3 Times. And failed each time.

The first time I went, it was Sunday. Of course a Christian themed burger joint is closed on Sundays. The second and third times I was faced with this problem:


Line ups. Snaking their way out the door. Huge. And with no place to eat inside, and no place to eat outside, I gave up again and again. Well, the fourth time was the charm. I had a Zipcar for the day, and found myself at TBP with only a small line-up. But that didn't mean I enjoyed my experience there.
I got in; just barely squished inside the door. The small space was crammed with people and no room to manuever. It was chaos in my mind. I am socially claustrophobic (not medically, that's just what I say) - that is to say I hate (HATE) being in crowded environments with people (malls, I'm looking at you). I begin to hate humanity in these situations.There was no distinction of who was in line and who was waiting. Two parents with their toddler sit at the wall counter that has signs up everywhere saying something along the lines of "No Eating - This Area for Waiting" after asking the staff if they could eat there but they got no answer (because the staff is too busy) so they sat down and ate. I also saw two individuals get the wrong order. I also had to overhear every conversation because I am steps from everyone.
I'm also glad I had read about TBP before so I knew what to expect, somewhat. For someone walking in off the street it isn't clear. Like the fact that they only take cash (the guy ordering in front of me waited 10 minutes to order, ordered, then had to leave because he didn't have cash on him and couldn't see the "cash only" sign because people were in front of it). Or what is on the menu (the menu board has items like "The Option" which if you don't know already, is a mushroom filled with cheese and fried as a burger) and because it is soo busy and soo jamed, there's no time to ask. On top of that, they also have a Secret Menu. Good luck.

But I could see the ground beef coming out - big meaty balls being smashed on a griddle. They looked so fresh and so good. I also watched the fries be fried, then put on a baking sheet, the baking sheet put on a rack, where they waited until someone ordered them. And because so many people were ordering, the turn over is quick and nothing has time to sit and wait. 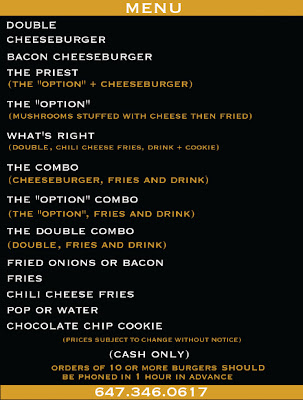 So I ordered the Cheeseburger ($5.29) with bacon ($1), fries ($3.29) and a pop ($1.29). I waited with people I was close to snapping on, but I didn't have to wait too long before my order came up and I ran outside to freedom. The line was now twice as long as before. I relished the air outside. Then I got in the car and drove to the lake to eat in privacy and unhampered conditions. 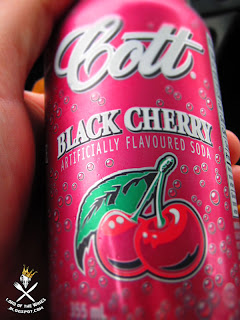 First I opened my drink. Yes they had your usual brand pops, but they also had Colt Black Cherry, and as you may know, I love my cherry colas. 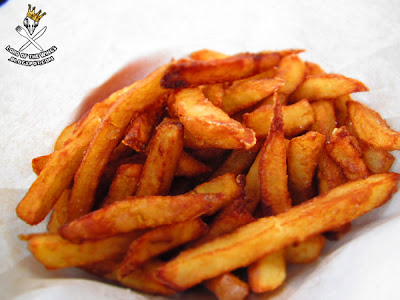 At the top of my bag were the fries. These were crispy but soft inside. They were unseasoned and I only managed to get 2 packets of ketchup before getting out of TBP. Some salt and vinegar, and these would have been awesome. 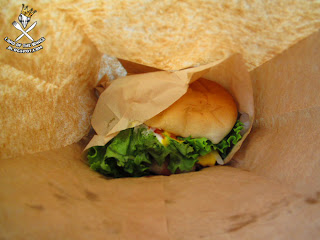 Digging down farther into the bag was my burger. Despite the ordering process, I was very excited to try this burger. I mean, all of those people were ordering in droves for a reason. 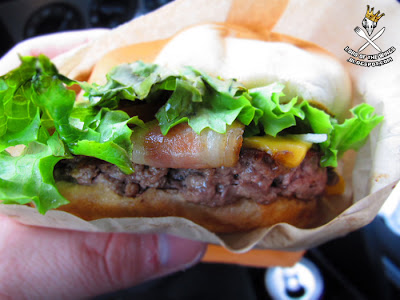 When I pulled the burger out, I wasn't impressed with the size - I guess I expected it to be bigger. But it looked great, juices dripping down from the sides. 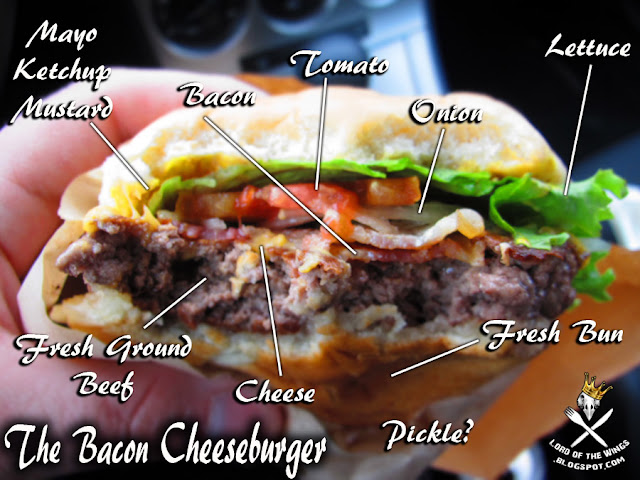 The freshness was great. That aside, I was was really underwhelmed by the burger. Yes the meat tasted . . . fresh, but it didn't really do much for me. The bacon was good - but again no strong flavour. It was also quite limp (I prefer my bacon crispy). It was a good burger - and very . . . fresh. But nothing stood out about it.

People in that area must be sick of the other burger options, because I can't imagine myself standing in line for so long and so squished for the burgers there. I built up this burger in my head and felt there was too much hype. The Burger's Priest makes a nice fresh burger, but not worth the effort to get it in my opinion. If there were less people and a place to sit, I'd consider it.  The price tag of over $10 for a small burger, regular order of fries and a can of pop didn't help much either.  I think The Burger's Priest place just re-affirms my stance on organized religion - a lot of people lining up because someone said something and never questioned them. I'm not anti-Burger's Priest, I'm just not a convert. 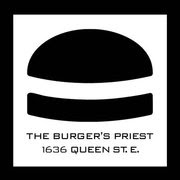 The Burger Priest
1636 Queen Street East, Toronto ON
theburgerspriest.com
Posted by Lord of the Wings at 8:10 pm

I LOVE TBP! Let's put it this way - I went with seasoned BP peeps who knew what to do. It could be that, because I ate there after walking a friend through a 15k race (3 hours.....), the burger was extra delicious because I was so freaking hungry! I also ate it without the bun because I don't eat bread.

If you want some other burger places to try similar in concept, there is South Street Burger Co. on Burloak in Burlington, Chuck's in Hamilton, and Five Guys in Mississauga and Hamilton - I had Five Guys in Florida and it was amazing. I'm not a burger person but when it is fresh< I devour them! :)

It beats the burger I had for lunch today...

@Brianne - Thanks for commenting - I think I was really put off by the whole ordering process. I would love to go and try again when there wasn't 30 people in line (but when is that?!) I'm sure I will try again & thanks for the tips!

@Chris - bad burger? where did it come from?