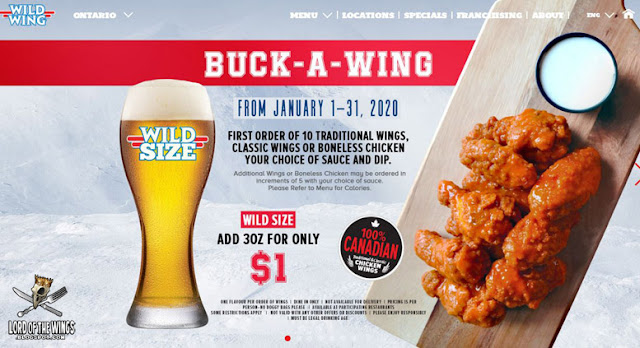 This doesn't sound like a great deal. $1 per wing, in the context of chicken wing history, is not a great deal. And on social media comment sections I saw people flaming the crap out of Wild Wing. But, it's also not 1995 and chicken wings are one of the most expensive cuts of chicken meat at the market. And when you consider that normally an order of Wild Wing chicken wings (about 8-10 wings) is $15, this isn't a bad deal. Mind you, that $15 does come with fries and veggies and dip, but still, it's relatively not bad. 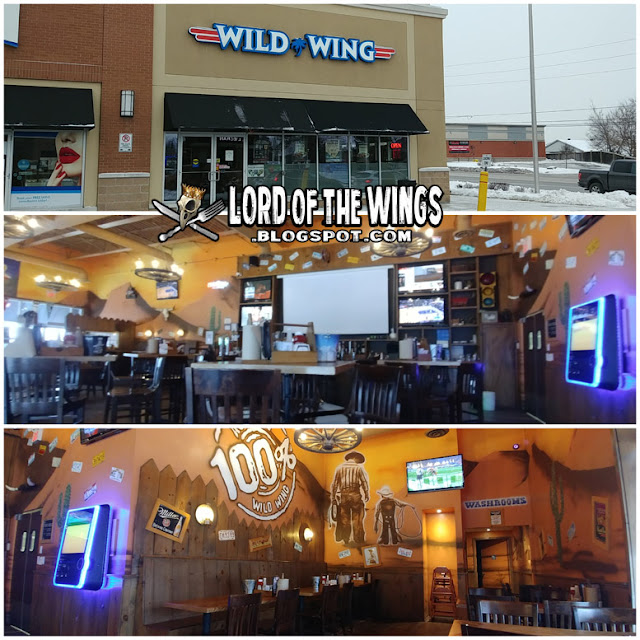 LJ & I decided to go, and we actually went twice, to two different locations. The first is the Orleans Wild Wing (where most of the location photos come from) and the second is the Hog's Back Wild Wing in Ottawa. While the layouts of the two places are very different, they both have the wild west theme mixed with sports bar. 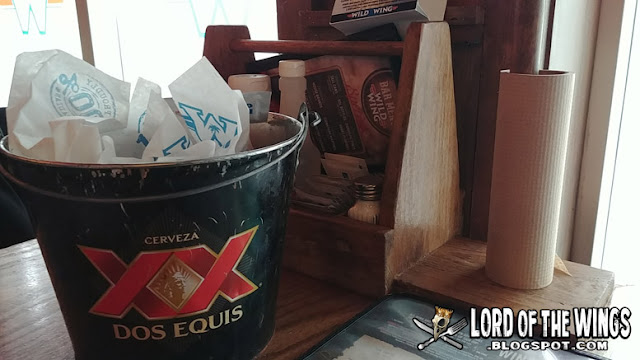 Both have you set up for wing eating. No regular napkins, just paper towel dispensers, attached to your condiment caddy (also filled with wet wipes for clean up). There's also a bone bucket. I love the bone bucket. At the Orleans location we were served by Ally and at Hog's Back we had Caitlin. Both took our orders, refilled drinks, answered questions, but Caitlin went the extra mile which we really appreciated. 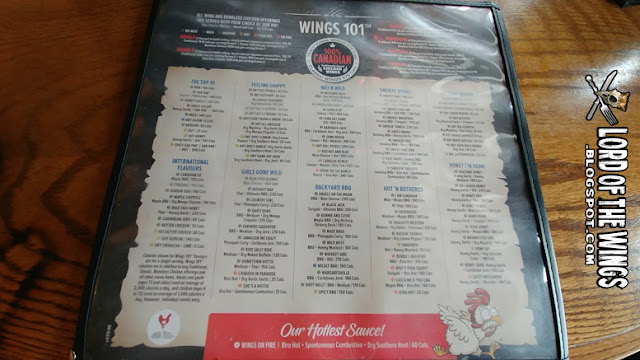 So here is how it works:


That sounded ok. I wish you could break up that first order of 10, but oh well. 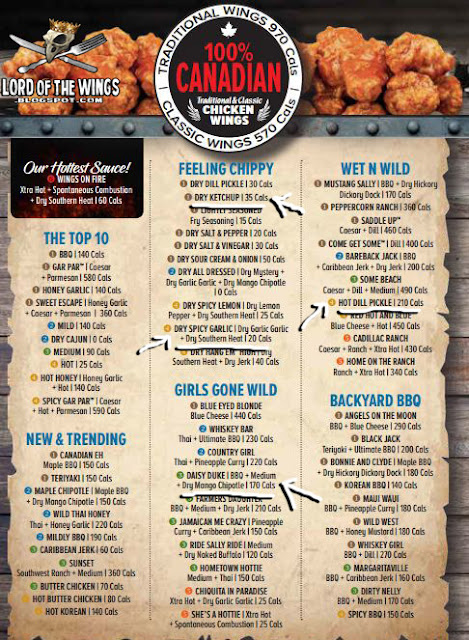 The difficult part of Wild Wing's is choosing your flavour. I mean, there are 101 choices! To be honest, there's like 15 choices that just make up lots of combinations of the other flavours. But you do have a good choice of sauces and dry rubs. 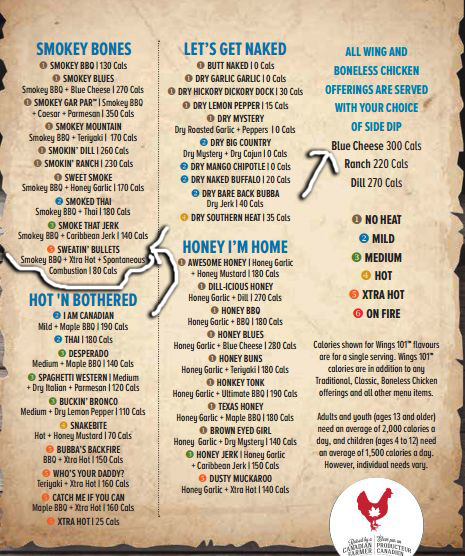 We had 2 visits, and on visit #1, we got 2 rounds. It's not AYCE, so we had to be pretty picky about what we were going to have. 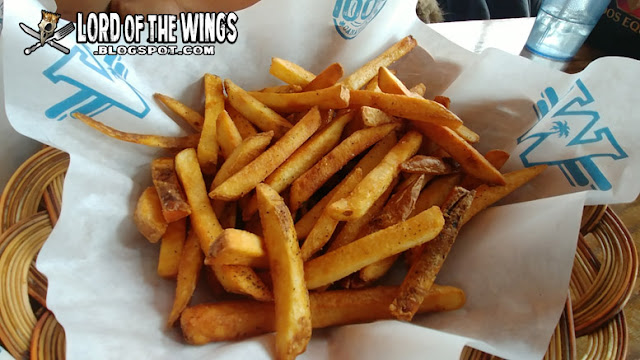 On both visits we also got a side just to break up the wing eating. On Visit #1 we got a single side of fries. Wild Wing fries are garbage. Ok maybe not garbage, but they are pretty sh*#@y. They look good in that photo, but they are frozen, fake-fresh cut, over cooked, flavourless (even with some spice seasoning on them). We did not finish these. 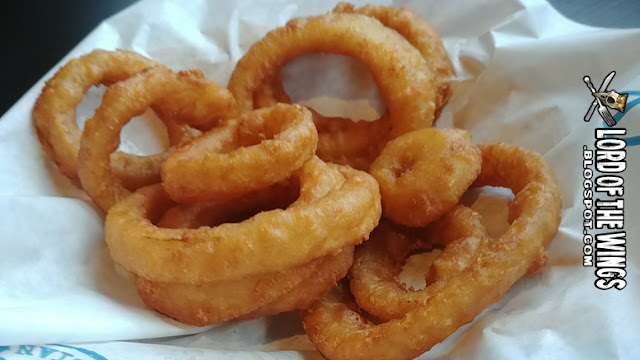 On visit #2 we learned our lesson and went with the onion rings. Much better. These were crispy with tender onion, but they were a bit oil soaked inside. But still, much better than the fries!

We also got veggie sticks with both orders and we both got Blue Cheese for dipping. It's a great blue cheese, creamy, tangy, but not off-puttingly pungent as some moldy cheese can be. 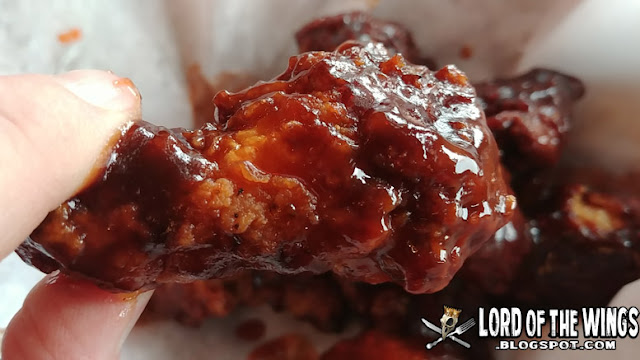 Before I get to the sauces, I wanted to point out that the wings are about a medium in length, but that they are very meaty pieces. They also came pretty evenly split flats and drums. They were all pretty well sauced/rubbed as well. 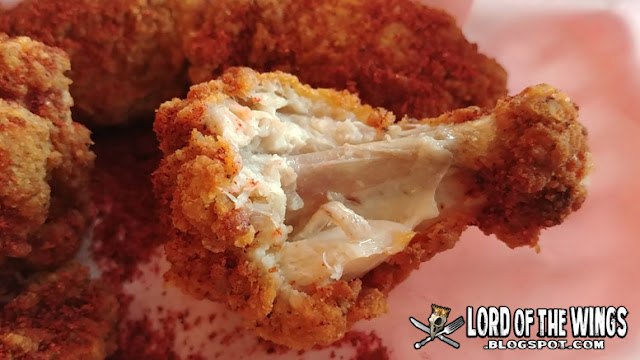 LJ and I both went with Traditional, which is breaded (I don't know why it's called traditional because wings are not traditionally breaded). These wings are very crispy/crunchy, came out hot, and were very tender. The bones pull away easily and I feel like they might be fresh wings. They used to be anyway years ago. So overall, very good, well fried pieces of chicken. 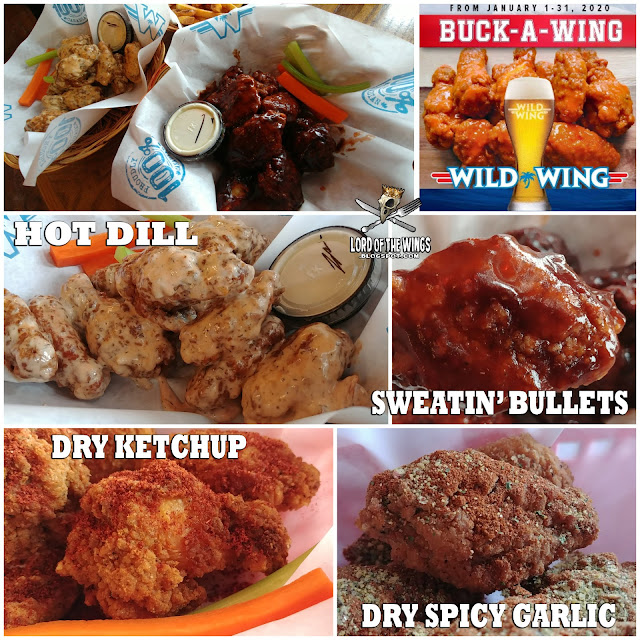 On this trip we had a late lunch on a Saturday afternoon. We were starved, and we both ended up ordering 15 wings each. LJ didn't eat all of hers, so I ended up having more than 15. Round 1 we got Hot Dill & Sweatin' Bullets, and Round 2 we got Dry Spicy Garlic and Dry Ketchup. 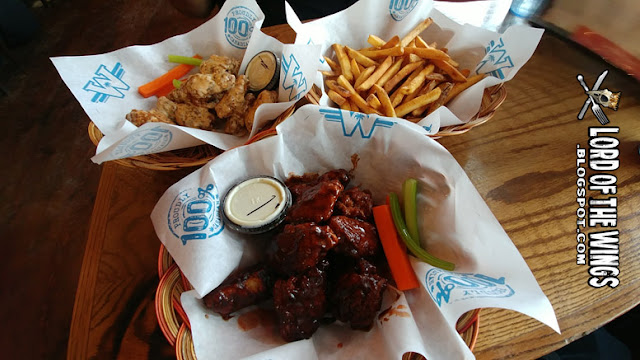 Our first round was saucy and we both dove in happily. 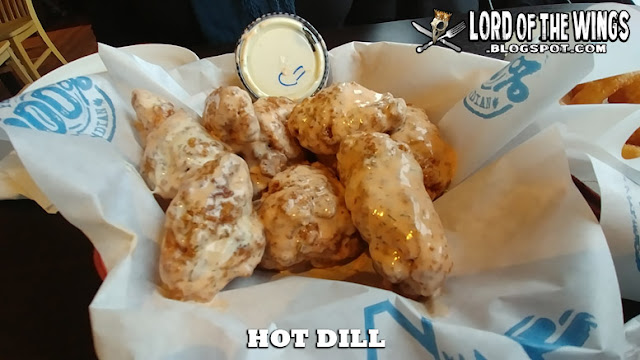 LJ in particular, loves the creamy wings here more than the other flavours. She went with Hot Dill, which I was happy to sample with her (as I would have ordered that myself if she didn't). It's a creamy dill sauce, mixed with hot sauce, and it is freaking good. 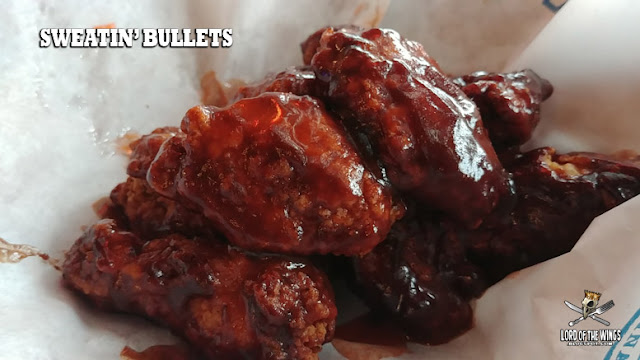 I wanted something spicy, but not so much creamy. It`s interesting that with all their flavours, Wild Wing doesn`t have a good Buffalo or variation on it, just straight hot sauces, mixed with the others. Well I also like a good BBQ, so I went with Sweatin`Bullets, which is Smokey BBQ Sauce + Xtra Hot (Frank`s Xtra Hot) + Spontaneous Combustion (I don`t know what this is and can`t find it independently on the menu). This is a great sauce because it has heat, like I feel a sting and cough, but the Smokey BBQ is dark, smokey, but a bit sweet. I was happy with these, LJ was afraid of the heat. 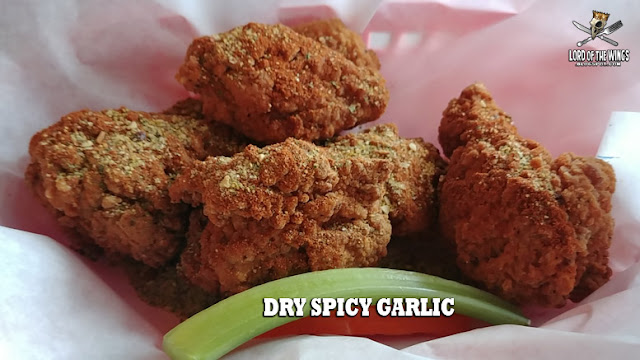 LJ went the dry route and something different. Dry Spicy Garlic was just that; well it was mostly garlic with some cayenne? pepper thrown in? LJ was not a real fan. I liked it, but a) would not want a whole order of this b) would need some sauce or dip for these 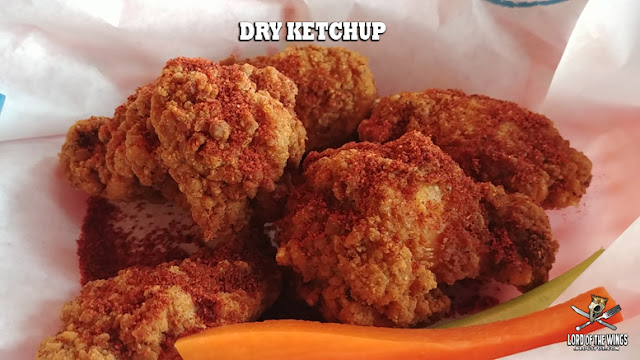 I went with an old stand-by: I love potato chip seasoning and I love this ketchup one on wings. The problem is that the flavour is not full throtle. It's there, but you really have to pay attention. But it's tangy, sweet, ketchup goodness. It goes well with the breaded wings too. Funny enough, I hate ketchup sauce and chicken, but I love these. 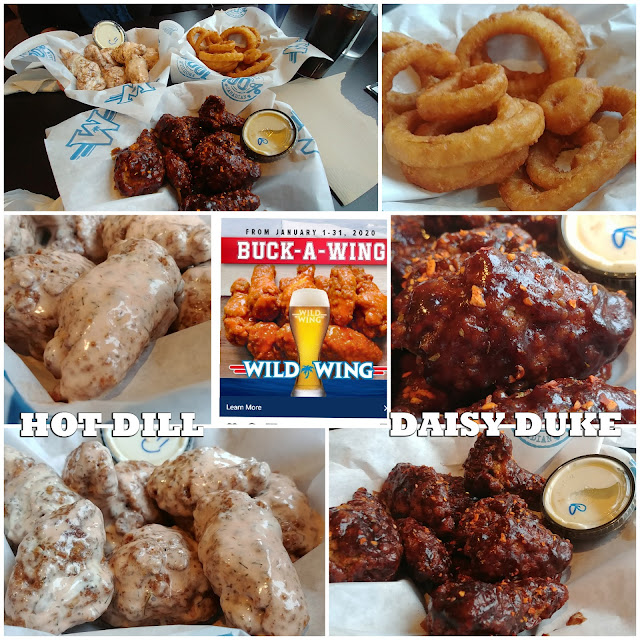 Fast forward a week or so and we decided to go back. Same kind of scenario, post lunch looking for a meal, but we weren't as hungry this time. 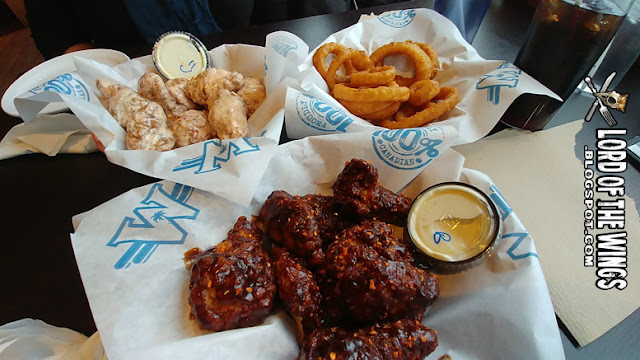 This time, Lesly got the Hot Dill Pickle again, so I'm not bothering to report on it again. I was looking for something different, not sure where to go. Then we saw Daisy Duke, and we both thought that would be interesting. 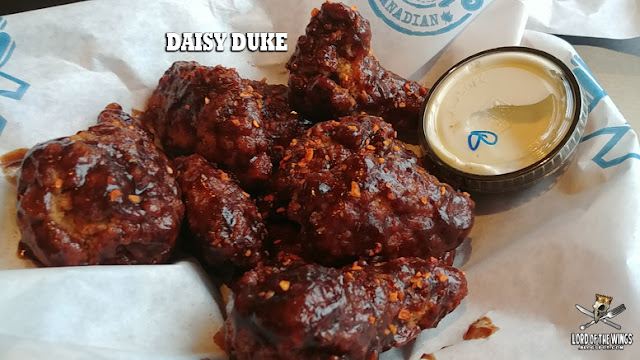 Daisy Duke is regular BBQ + Medium + Dry Mango Chipotle. You can see the dry rub sprinkled on - the wings are a thing of beauty. I really liked the flavour here. Again, I like a nice spicy BBQ (not that Medium is spicy, but you know the gist of what I am saying), so the base was good. The Dry Mango Chipotle, while not strong, gave a mysterious flavour note to an already tasty wing. I would get these again for sure. 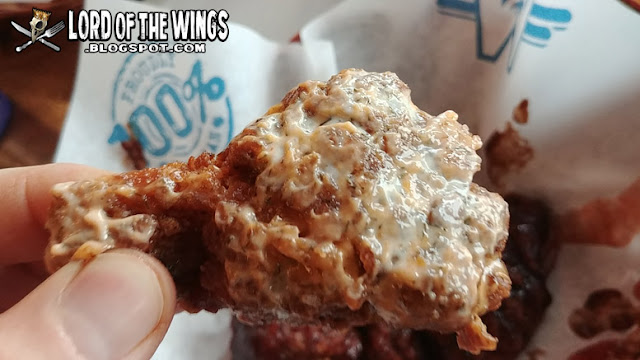 In the end, we both had pretty satisfying wing experiences. The wings are meaty, crispy/crunchy, tender with really good commercial sauces on them. Pass on the fries, get the onion rings, and stick to blue cheese for dipping. It may not be the cheapest deal in town, but it was worth it I think. 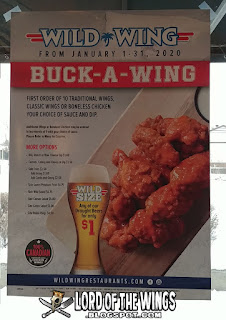 @Chaz Regal - Thanks for stopping by & commenting!