I am always on the hunt for not only new wing joints, but new restaurants with food that I love. You know, pizza, burgers, bbq. I also love independent joints. So I'm going through my Instagram and in the Explore section, I see Caleel Hall (@caleelh on Instagram) posted a photo of a giant burger: 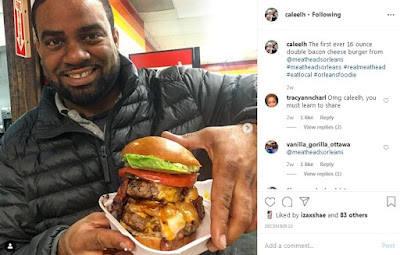 That burger looks massive! That led me on a little investigation. Turns out he was in Orleans (a suburb of Ottawa, not to be confused with NEW Orleans in the US), and he was having this amazing burger at a new place called Meatheads Grill. That led me to a little rabbit hole of research on this new place. Turns out they just had their grand opening on November 30th, and we were now into December! As I checked out their Instagram (@meatheadsorleans) and I saw that there was wings on the menu. And as fate had it, I was headed to Orleans the next day!

Now the next part of my review is mixed and I'm going to jump the story. In the month of December, I went twice. The first time for wings, the second to try the burger. But the structure of how I write my reviews doesn't fit for chronology. Just wanted to give you that heads up. 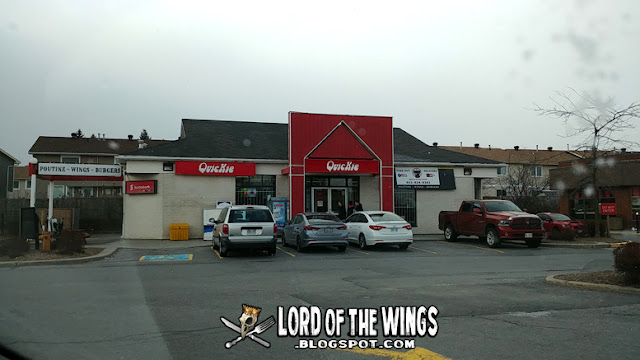 Meatheads is inside a Quickie convenience store, which seems crazy. There are signs up for Meatheads, but if you don't know this area (and I didn't) it may be hard to see. I had done some research, but didn't know where to go exactly until I saw the red Quickie mart sign. 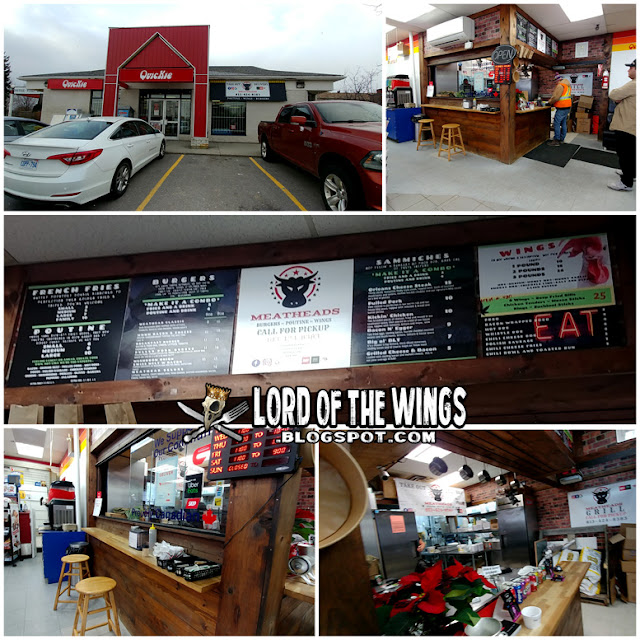 Inside Quickie, in the back left corner is Meatheads. It looks kinda like a BBQ joint grew into the convenience store. I almost thought it could have been like a Subway or something originally based on the size. Actually I thought this was their first time/food venture, but after talking to one of the guys running the place, the owner/chef Jessie James was doing like a french fry thing before. I later found out they were doing that out of this same location.

Both times I went, the Meatheads crew have been busy, on the go, scrambling to make everything work. Deliveries are coming in, calls are coming in, customers are coming in. Each time I came in I'm told up front that something isn't available for the day (they are still working out inventory kinks). Eggs seemed to be out both times. The staff are friendly, as was owner Jessy who I would have love to chat with, but he was constantly on the go. 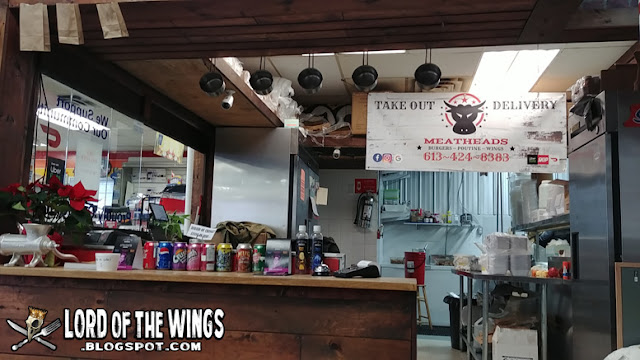 Everyone was ordering the pulled pork sandwiches. That seems to be what to get here. The other guy that was doing the front of house (didn't catch his name, might have been Neil?), gave me some of the lowdown of what was going on. He told me he wasn't the one cooking, he was just the taste tester (as he was eating part of a sandwich that Jessy brought him). He said they'd been up and running a couple of weeks; he asked if I was here because of the Orleans Ontario Foodie group, who did a lot of word-of-mouth promotion for their big opening.  He said the pulled pork was popular, as was the burgers, and teased me about getting the wings. The next time I went back for the burger.

I ordered the Meathead Delux ($14), which comes with no sides, but is a big, hefty burger. It came in a biodegradable small clam-shell, and barely fit in, and it felt heavy like a brick. I got the burger to go and when I was sitting there in my car, I thought, "how am I going to eat this thing without making a mess everywhere!"

And I did make a mess. It's a very messy burger. 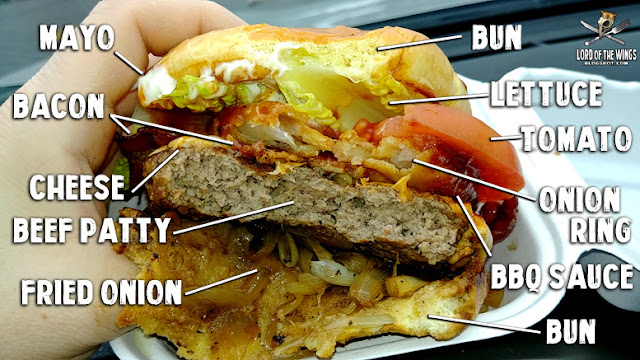 The Meathead Delux is:

I got mine without mushrooms because, well mushrooms are gross. This thing was teetering left and right and was impossible to hold single-handedly, which made photos hard to do. It's saucy, full of ingredients, and was hot to boot. 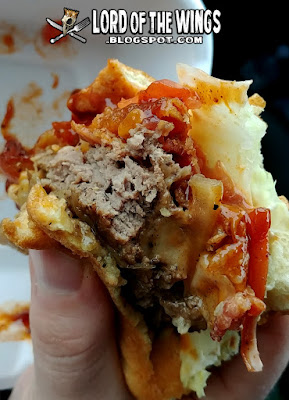 Everything on that burger tasted fresh and delicious. First, you have a nice soft, toasted fresh bun. Then the burger is fresh ground beef from a local butcher and ground in house; nice beefy flavour which went well with the cheese. The bacon is meaty and crispy and salty. I love the crispy onion ring in there. Then you have the fried onions adding their own smokey/caramelized attitude to the burger party. Finally, I love mayo and BBQ sauce on a burger, and this thing was oozing sauce. It was just a really good burger offering everything I pretty much want on a burger. But make sure you have napkins.

On the first visit however, I was here for the wings. When I ordered, Neil(?) asked Jessy & the cook in the back if they were good for wings. Jessy said they had wings "but we have to rinse them off and throw them in the fryer. They just thawed out overnight so they will take a few extra minutes" - I appreciate them being upfront about everything so I can make the best choice. I chose to wait because wings are worth waiting.

When Neil(?) asked about what sauce I wanted I asked if their Hot was just like Frank's. He said it was like a "regular, bbq wings hot,"  Jessy jumped in and said "it comes in the big jugs, we don't make the hot sauce itself, just the bbq sauce and the burger sauces." So I clearly went with the House BBQ; "Ya you'll like that" Neil(?) said proudly. 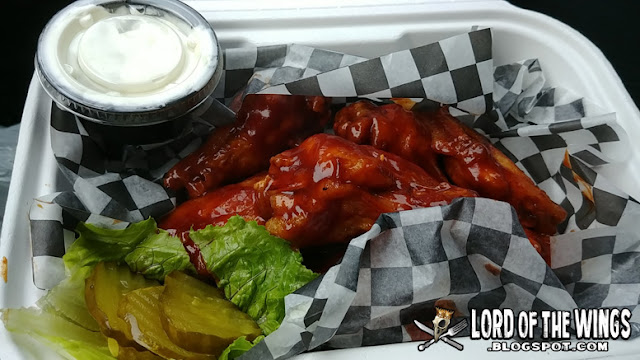 I did have to wait a while for the wings, but that was ok (and they told me they would take some time). When they were ready the packaged them up and asked me if I wanted sour cream. I asked if they had blue cheese or ranch and Neil(?) balked at me, 'Ranch, bah, they don't serve salad, ranch is banned from here'. So I got sour cream and headed out to the car. 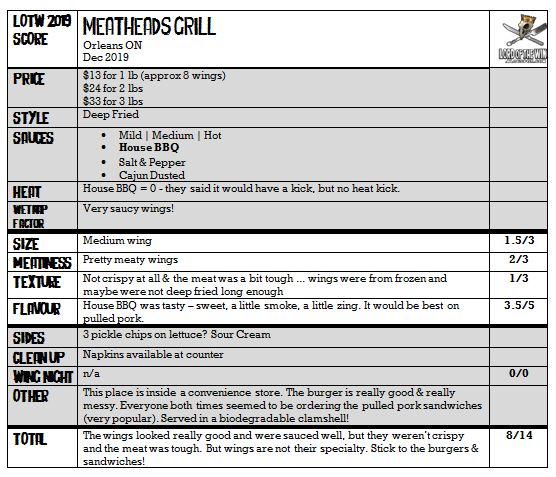 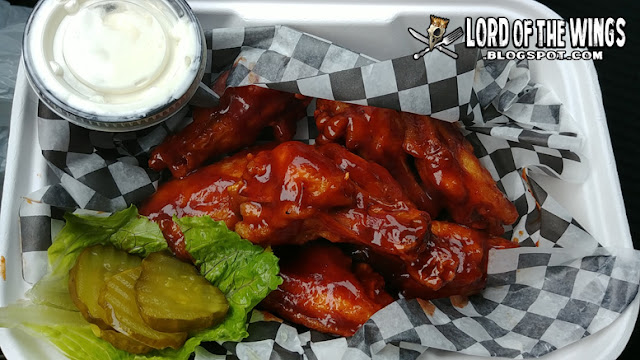 The wings too are served in a biodegradable clamshell, and I have to give them props for using this instead of styrofoam. The wings come by the pound, and there are approx 8 wings in that pound, pretty evenly split flats and drums. 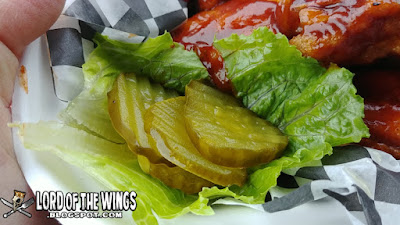 They even came with a garnish of a lettuce leaf and some pickle slices. I found it odd, but it was nice, especially having the tart, bright pickles to contrast the fried, bbq sauced wing. Plus it looks pretty! 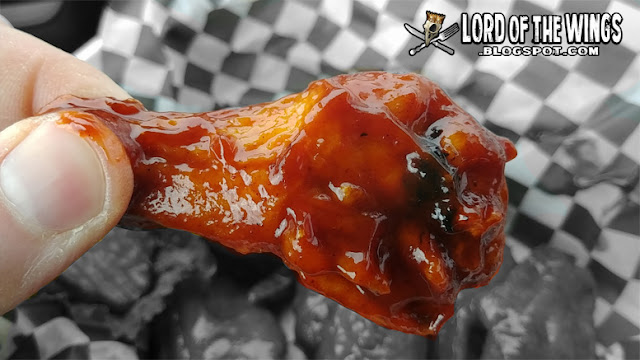 Size wise were were looking at a medium wing in length and size, but the wings were pretty meaty. 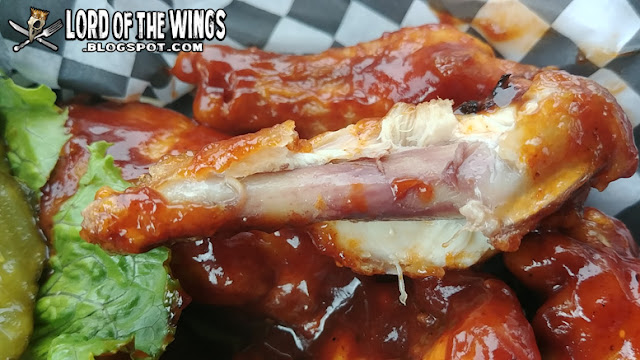 Unfortunately, the wings were not very crispy at all, and the meat was a bit tough, and my eating time was moments from getting them to walking to my car. They said they had just thawed, and maybe the wings didn't spend enough time in the fryer?  Or maybe it was the sauce ... 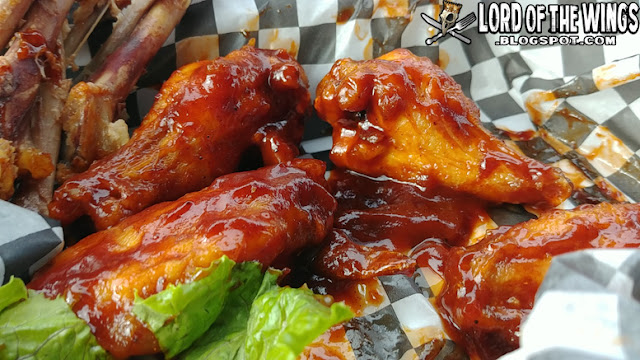 ... because these wings were saucy! Really wet, with every inch covered in sauce, with lots left behind in the container. So the sauce may have weakened the structural integrity of the crispy skin, but I still suspect not enough deep frying. 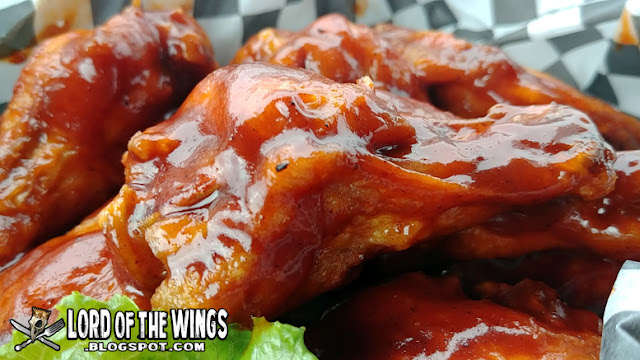 The flavour of the sauce was tasty. Zippy even? Its sweet, it's got a little bit of smoke, but still a light sauce. It's right in the sweet spot of texture being not too thick and not too thin. Jessy had asked me from the back if it was ok that the sauce had "a kick to it", I said Sure, ya cuz I'm into that, and he clarified that "it's not killer or anything." Unfortunately I didn't find it had a kick or any bite, but it was tasty.

This would be excellent on pork or other bbq meats. I can see the sweetness pairing well with the pulled pork for example, better than I think it does with a chicken wing. 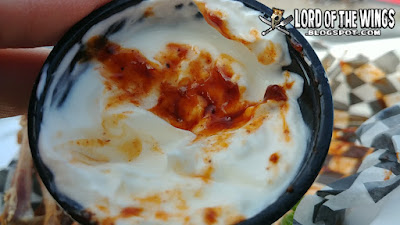 I liked Meatheads a lot. It's the kind of quirky little shack you would find on Diners, Drive-In's and Dives. People oriented crew with a passion for their product. The food isn't cheap, but it's priced fairly and is definitely not mass produced fare. The wings were tasty, but I wish they were a lot more crispy. Next time I go I'll pass on the wings, but when you have an awesome burger like the Meathead Delux, why would you get the wings? 8/14 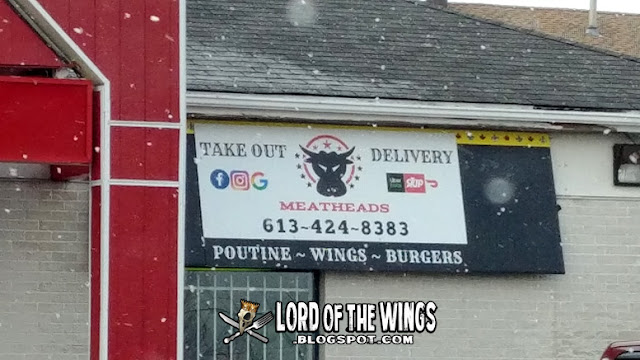 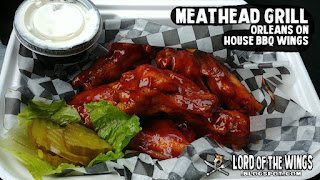