This may sound crazy, but every time I travel from Ontario to Quebec, it feels like going to another country. The road signs are different, the language is different, and there is a distinct cultural difference between the two. This includes food; not only does Quebec have it's own culinary eperience, but it's own fast food chains that don't exist outside the province. Dic Ann's is one of those. 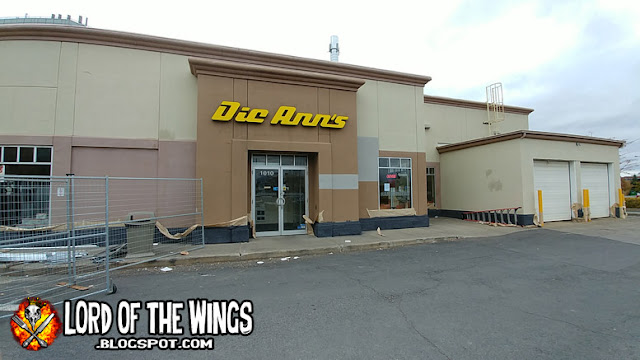 LJ was in Montreal for business, but when she was done it was time to get some lunch. I was doing some research on where to eat, and I came across this Quebec-only chain called Dic Ann's. See, back in 1954 jazz accordionist Ann Russel and her American born husband Dominic 'Dick' Potenza who moved to Montreal and opened their vision of a hamburger joint that served their special hot sauce in a little shack. They moved into their original restaurant and now over 50 years later they have a chain of more than 10 locations. But they don't just serve normal burgers. More on that later.

If time and distance permitted I would have liked to go to their original location, but as life would have it, we couldn't, so we hit up their location at Marche Central. I've noticed several mall or commecial buildings that in Montreal make no sense to me. This location is in a big mall plaza, in a building shared by a Tim Horton's that is undergoing renovation. But both store fronts look like the back, but are the front as the other side just faces the entrance to the mall area. The construction aside, we weren't sure if this was the front of the restaurant or the back. It was the front, but what a terrible looking store. 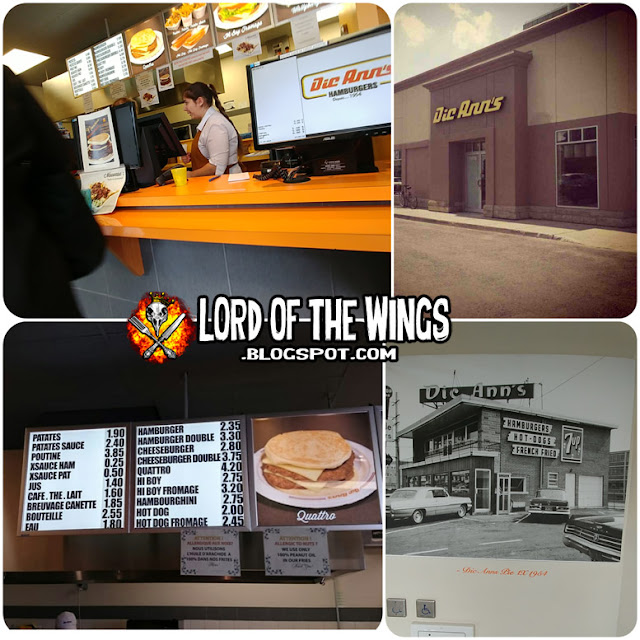 Inside was a flurry of activity as customers were lined up, ordering, leaving, standing, sitting. Very busy place. Even though I had looked at the menu before, we needed to stand back and take in the menu. Everything was in French, and so we had to do some on the spot translating. I was not feeling confident in my Francais and I politely asked in my best French if they spoke English; the cashier (unhappily) did. I felt bad, but this was new food territory and I didn't want to make a mistake. Sorry!

The inside is painted in yellows and oranges and off-whites. There are black and white photos of Dic and Ann, the first restaurant and other franchise nostalgia. The seating is classic fast food tables with a mix of American and French pop music. 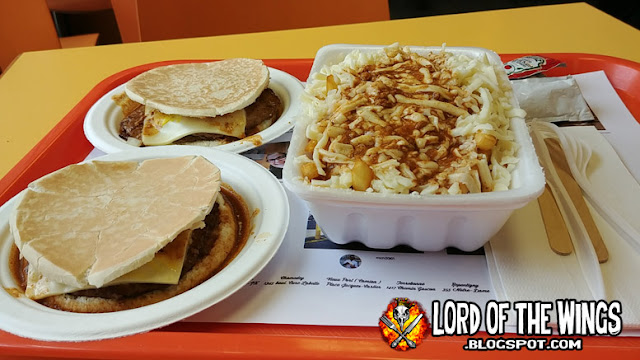 The menu is very limited to their burger and it's variants, hot dogs, and fries and fry variants. We decided to split a Poutine between the two of us, and LJ went with a cheeseburger, and I went with a double cheeseburger. 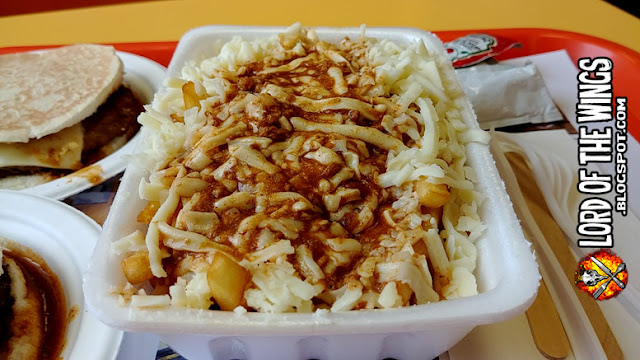 I was shocked at the poutine. I was shocked that such a thing could be called and served a poutine in Quebec. Shocked. Their poutine ($4.95) is thin cut fries, covered in shredded mozzarella and their 'hot sauce'. Shredded mozzarella. Not cheese curds, mozzarella. #poutinecrime. And no gravy, just their hot meat sauce. It's not that it tasted bad, it wasn't half bad. It just isn't like any poutine I know, (well maybe like some in Ontario). The fries were crispy, the sauce slightly spicy. Ketchup helped. It was a good size portion. 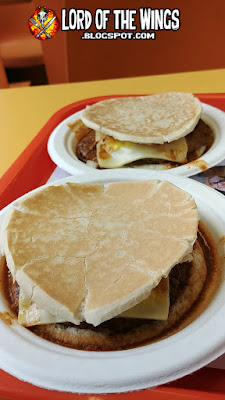 Now one thing that sets this burger chain apart from others is the construction on their burger. They start off with ground beef that is pre-pressed into the flattest possible patty you can imagine. That patty is 1.75 ounces - super tiny. When I proposed this place to LJ, it was based on this fact as she loves a thin burger. That thin burger is cooked on the flat top and pressed even flatter. See this photo from their website: 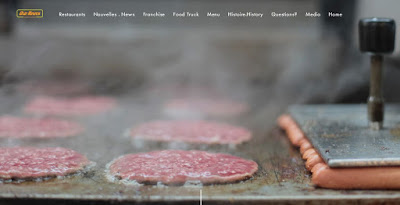 That is almost paper thin. They cook it for like 30 seconds a side then flip. 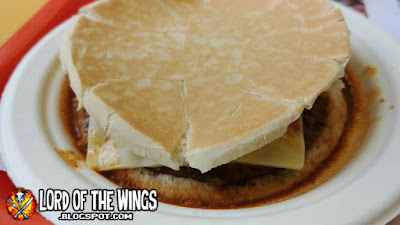 The bun is white burger bun that is squashed and toasted in it's own press. The bottom bun is then layered with their spicy sauce, then the burger and whatever burger variant you are getting. 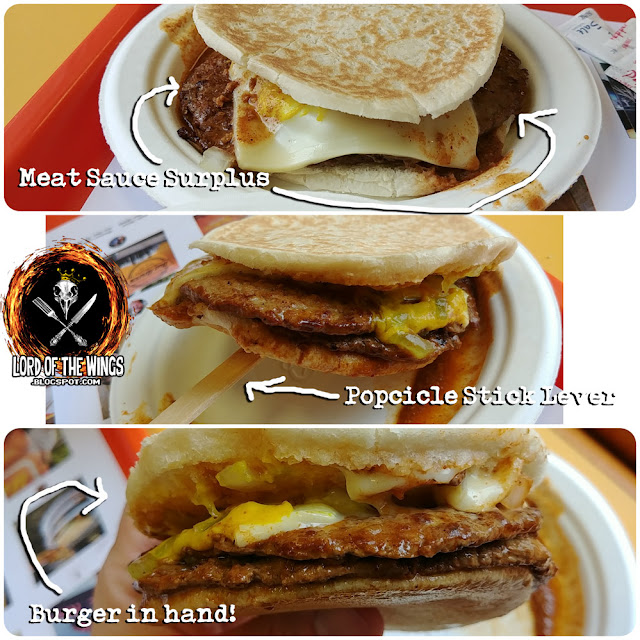 There is an excess of their spicy sauce on the plate, so they supply popsicle sticks that you use as a lever to lift the burger out of the sauce. 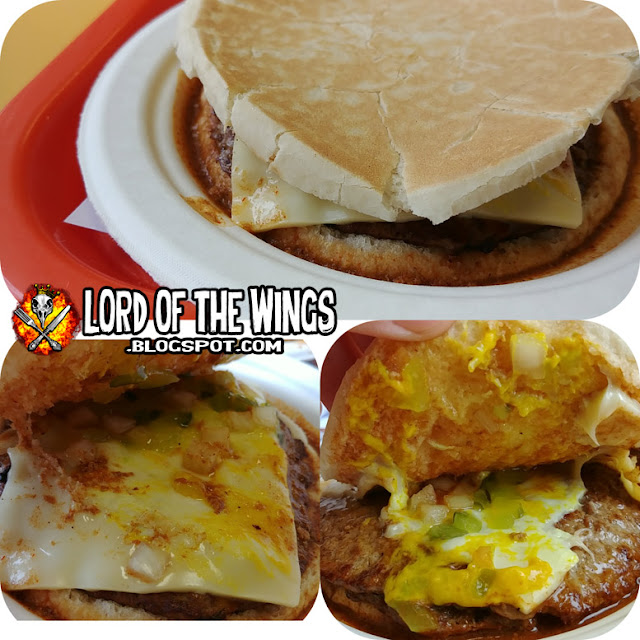 LJ just got the classic cheeseburger that comes with 1 patty, spicy sauce, cheese, swiss cheese, onions, relish and mustard. She thought the burger was ok. It was really small even for her. For $2.80, it still seemed really small. 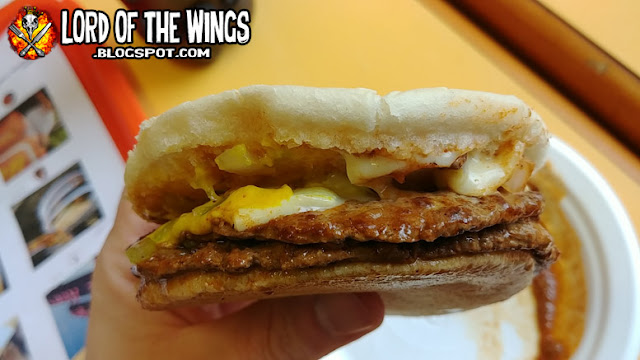 I knew a single wouldn't be enough, so I went with a double, which 3.5 oz of beef and is $4.45. It was still pretty small. I debated going with the double, or the Hi Boy, which just adds lettuce and tomato, or even the 3DST which is 3 patties, 2 mozzarella slices, with lettuce or tomato. Or the Hambourghini which has pepperoni on it. Again, I just went with a double. 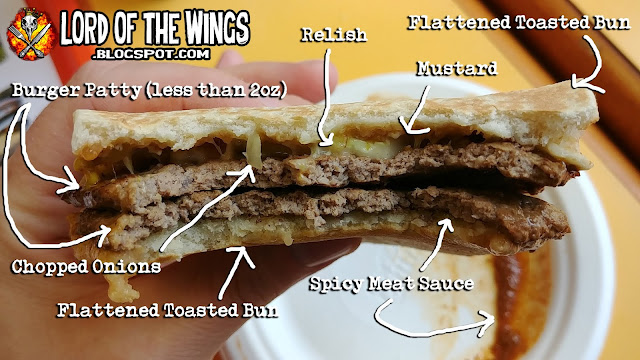 I was really underwhelmed by this burger. It was tiny, and the flavour was simple. A little too simple. The beef at that size has no flavour. The texture is fine, but I don't understand the point. The bun was kinda crispy and had a unique texture. It was different and no complaints there. The spicy sauce is a secret homemade, tomato based, meat sauce. On the burger, the sauce is barely noticeable beyond the texture. When you try it on it's own, it's got a very slight kick of cayenne. But again on the burger you can't even taste it. The onion and mustard is the dominant flavours here, and even they aren't that strong. 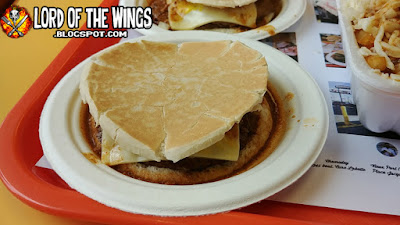 Would I go back? Maybe? We just didn't get it. I don't know why folks seem to go crazy for this place. The burgers are small, with not much flavour. It was just too simple and not bold enough. With our 2 mini burgers, poutine and a 500ml Pepsi the bill came to $17.83. That just didn't seem worth it. Again, the food was ok, it was just tiny and plain. We left not full, nor satisfied. Oh well, sometimes you score when you explore another culture, sometimes you don't.