I continue to re-visit places I blogged about years ago since I have moved back to Ottawa. Crazy Horse Stone Grill Steakhouse & Saloon is one of those places, and this past October, I went back. 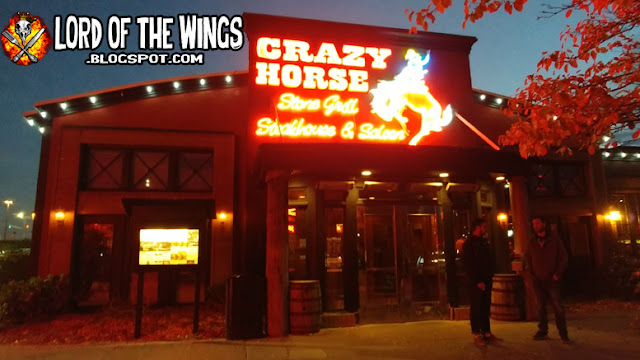 The first time I went to Crazy Horse was in 2011 when I did a review of the wings; They had been opened since 2009 but I never had a chance to go before. My review back then was that they were expensive and not as big as I would like, but they had great homemade sauces and well fried, crispy skin. They were good. 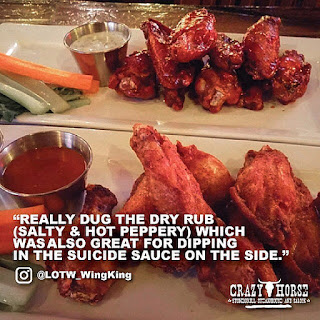 Then it was April 2017; a Thursday. Thursday was Crazy Horse's wing night where they had 1lb of wings on for $4.99! I did a mini-review in my 2017 Year End Review, which was based on my Instagram post - Crazy Horse saw this post and quoted me on their Instagram! Things were good on this visit and I decided I would definitely come back. 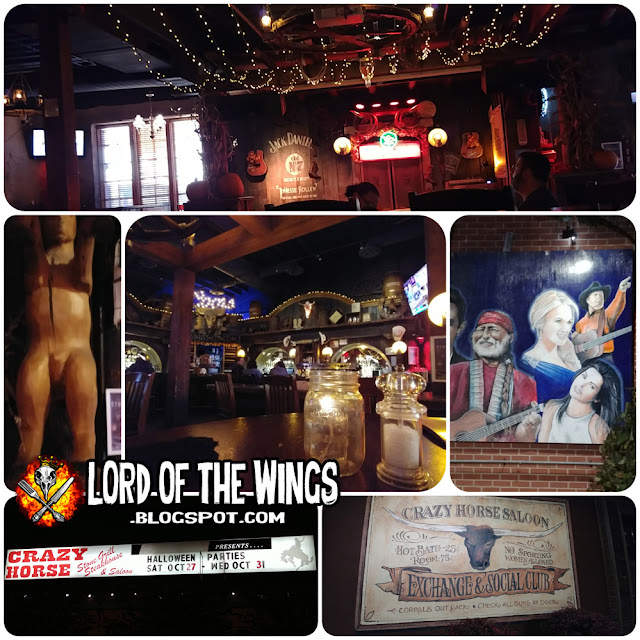 As an update, I don't know that anything has changed at Crazy Horse at the restaurant itself, whether it was back in 2017 or 2011. Cowboy/Western themed restaurant that is big on booze and dancing at night on the weekends. At a normal dinner hour, the place was pretty quite (given it's size, which is huge inside). 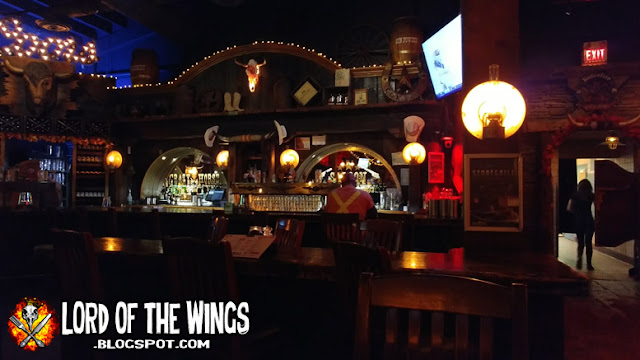 I do love the look inside - it feels like an old timey saloon from the cow skulls, carved horses, and big wooden bars. The staff are all decked out in flannel and cowboy hats. It's really dark inside so you will have to excuse my very dark/blurry photos. I'm going to come clean, I didn't intend to go to Crazy Horse on this particular occasion. I was going to Jack Astor's next door, because they were having a free wing promotion. Only when I got there, there was a huuuuge line-up. I was dining solo, so I wasn't going to wait in line and take up a table by myself. 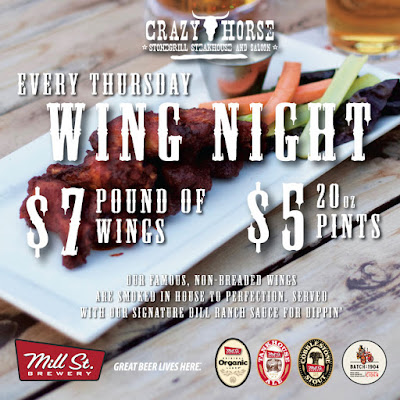 It was a Thursday, and I knew Crazy Horse had wings on special and well, there was no line up, so in I went. The one downside was that their awesome wing promotion of a $4.99 a pound was now $7 a pound. I mean still a decent deal, but it's not a $5 deal. Now I knew it was wing night going in, but I didn't see any signage that this was the case. My server also didn't bring it up until I asked about it either, so it pays to do your research and to also ask if there are any specials on. My server Ashley was friendly and looked after me, but sometimes things slip. 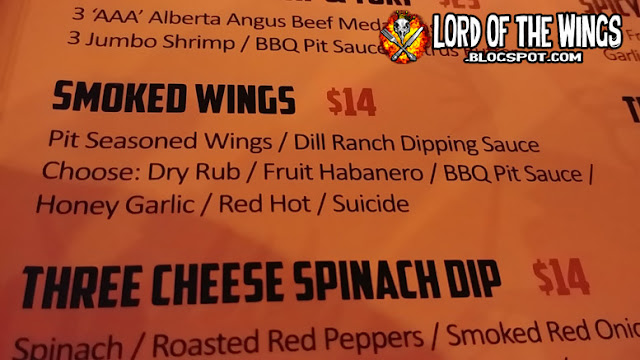 A big difference from 2011 is that the wings are now smoked, then fried. They don't list them on the menu as fried, but they are after being smoked. The sauces are also different, but still sounded interesting. The menu doesn't list how many wings you get or the size of the order, but since I had been last year I figured it probably hadn't changed that much. With it being wing night I got a double order with 3 flavours to maximize my sauce potential. 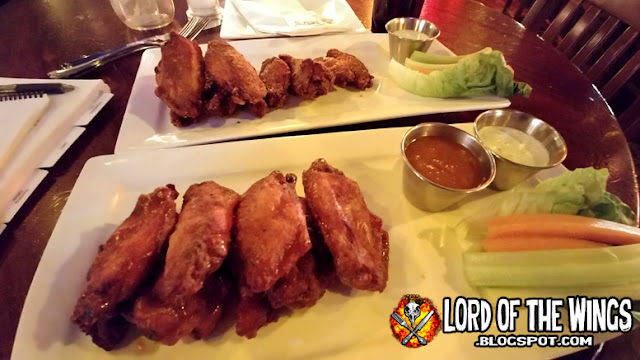 It didn't take long before I had two massive long plates in front of me which took up what felt like was the whole table! 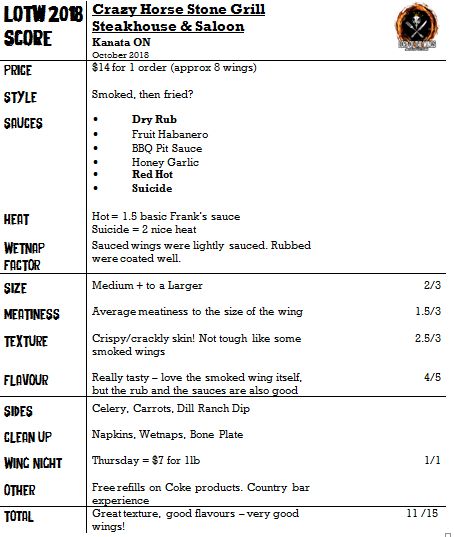 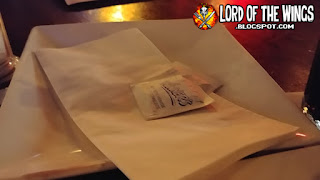 Right after I ordered my wings Ashley brought me a bone plate with napkins and wetnaps. Nice. 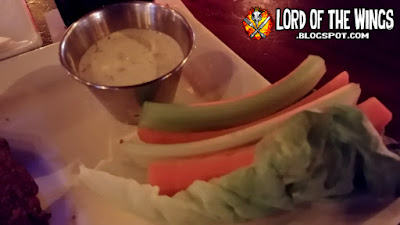 The giant long platters came out with celery and carrot sticks on a giant leaf of lettuce, with Dill Ranch dip. Yes. Thank you. Not only is this hard enough to get on a wing night, but with wings in general these days. Veggies and dip. Should be standard, but it's not. Thanks Crazy Horse. The veggies were fresh, and the Dill Ranch was dilly, ranchy, but a little runny - would have liked it creamier - but it was tasty. 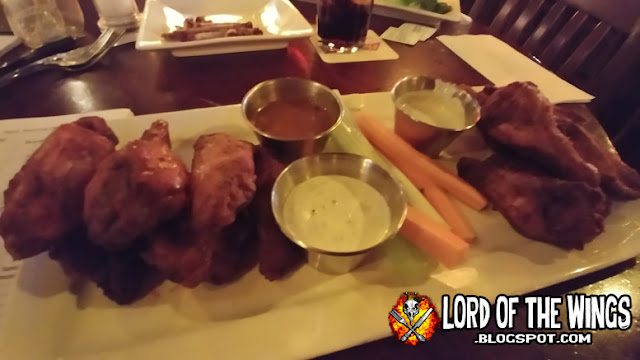 As mentioned before wings come in orders of one pound, which works out to be about 8 wings. Because I got 2 orders, they came out on two massive platters, but once I had done some eating I was able to merge the two onto one platter. 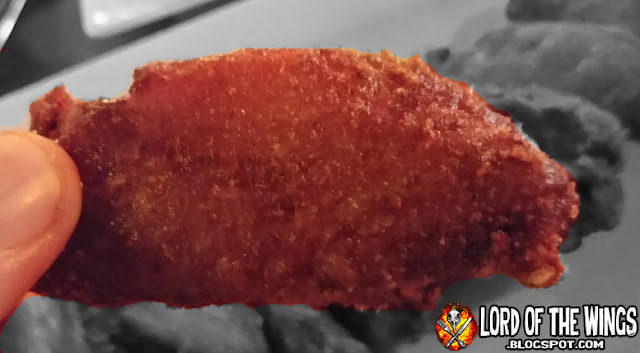 The wings are a medium plus to a large wing in size lengthwise, which was pretty decent. Meatiness was average to the size of these wings. The wings are smoked, but the meat wasn't tough like it is with some smoked wings. Then I am REALLY sure the wings are fried; it doesn't say this anywhere mind you, but the skin is so crispy I can't imagine that they aren't. The skin is like crispy/crackley - really good.  Dry Rubbed wings were well coated, but the sauced wings were lightly wet. 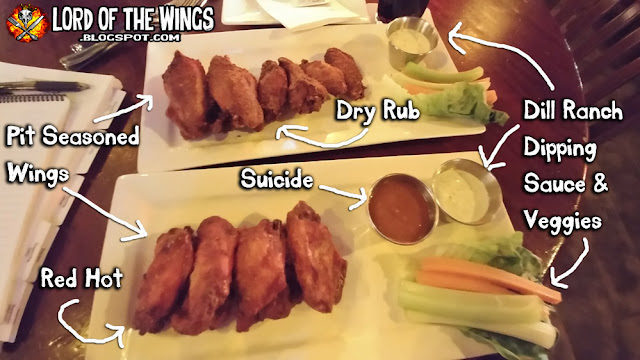 I love to sample, so my strategy is to go on wing night, get a few orders, at least one of those orders will be a dry rub and then get a sauce on the side. This is what I did at Crazy Horse. 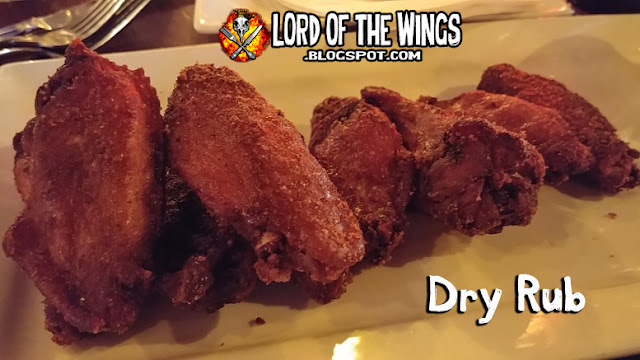 As I first wrote on Instagram last year, I really dig this rub. It's just really good. It's salty, it's sweet, just a lot of nuance to it. So good just as they are without sauce. I actually asked the server who was clearing my plates if the rub was a secret, she said she would go ask. Ashley intercepted her on the way to the kitchen and came back to report to me - she said it was like 'a bunch of spice, a whole bunch of stuff in there'. Ok, but then she mentioned there was mango in there. Mango! That's the sweet I couldn't identify. Awesome. 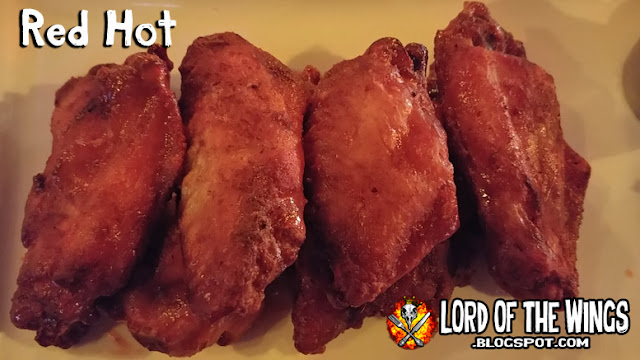 I'm pretty sure the Red Hot is just Frank's Red Hot. That's not a bad thing at all - it's tasty cayenne hot sauce that goes well with the smoked wings. 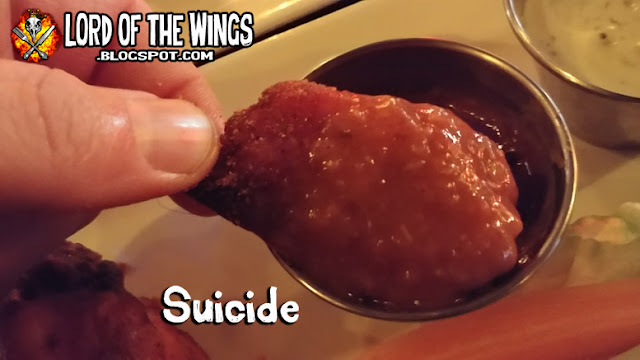 I didn't love this sauce, but I did feel it was a quality sauce for someone that isn't me. Mainly because it's very sweet. It's very fruity flavoured. There is a heat but it takes a minute to kick in. I was like "this is sweet sweet sweet, and then it was heat heat heat." It had a good sting, and if you ate a whole order of suicide it would burn. I wouldn't because it was too fruity flavoured for me, but the heat was good.

I asked Ashley about these too. She went and asked the kitchen, and said there was Carolina Reaper Pepper and Ghost Pepper in there. Now back in October I had Carolina Reaper powder on wings and I was in extreme pain, since Carolina Reapers are over 1 million Scovilles, so this suicide must be in very small amounts to have the 2 hottest peppers in the world. They were hot, but I was not feeling the pain that these peppers should have. I think that there must be scotch bonnet peppers in there too to get that fruity heat. 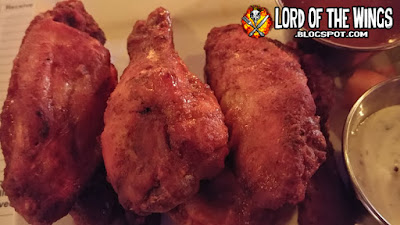 These were some good wings all around. All the senses were being affected:


The Dry Rub was the best because it just has so much going on, the suicide was actually hot (if not a little sweet for me) and hot was classic. The wings themselves were cooked just right. Getting veggies and dip was an added bonus. I went there by accident but so glad I went back. Ye haw! 11/15 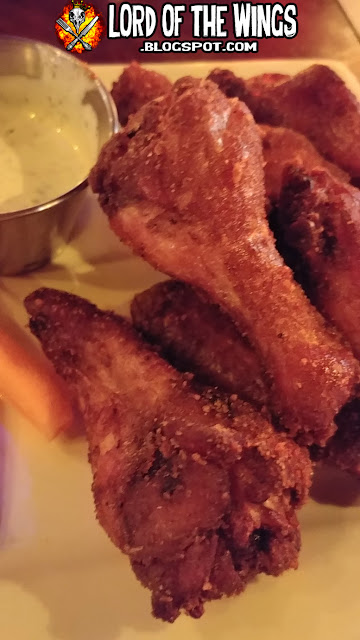