THE CAPTAIN's BOIL - Ottawa ON

My birthday was this week, and one of the ways that is important for me to celebrate is with food. Shocker, I know. Wings are always on the menu somehow, but I also like to try something different too. Last year I really wanted to try The Captain's Boil, but we ended up going elsewhere. So this year LJ and I decided to go after all. 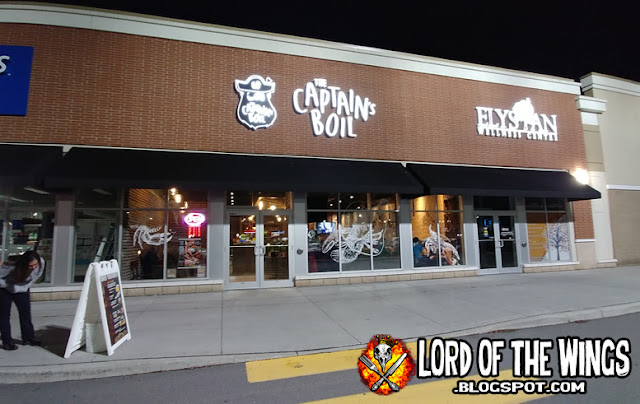 I have been all over the US, but one place I haven't been is Louisiana, and I very much want to go. A big draw is the food to be honest. I've been fascinated for years after seeing seafood boils, specifically crawfish boils. This is usually a big family event where in a big outdoor pot you have crawfish, corn, sausages, potatoes etc boiling and seasoned with Old Bay which is dumped out on a table covered in either butcher or newspaper, add some lemon and hot sauce and everyone just goes to town.

That isn't done here, and I'm not going South anytime soon, so the Captain's Boil is the next best thing. 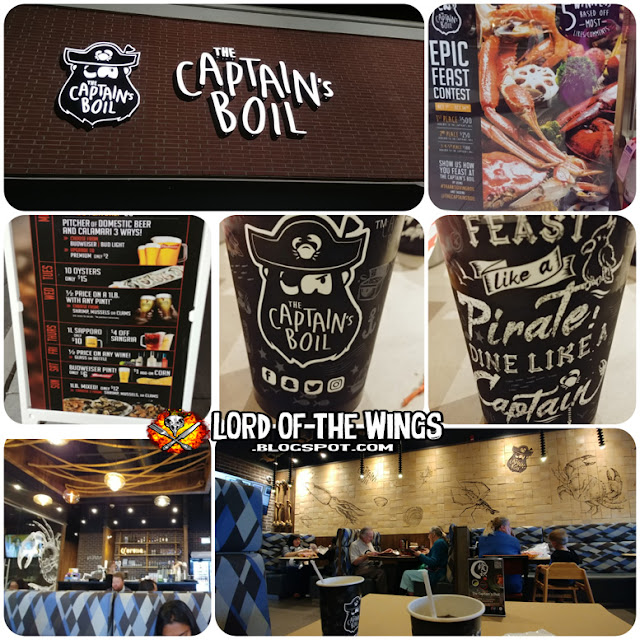 The Captain's Boil is inspired by the Cajun experience, with a Chinese twist. Some of the spices, even some of the ingredients (lotus root?) are not traditional, but they follow the basic premise of seafood boiled in seasoning, eaten with your hands. It's a chain that started in Toronto and has spread across the country. Ottawa has two locations, and we went to the one on Hunt Club.

The restaurant has a pirate theme; "Feast Like a Pirate, Dine Like a Captain" is the catch phrase around here. I half expected a parrot to fly around or a big mascot of the Captain to walk around. Inside is clean and simple - it's a fast food-like dining experience rather than fancy seafood place. Drinks are served in paper cups - we assume this was because real glassware would slip since you are eating with your hands. 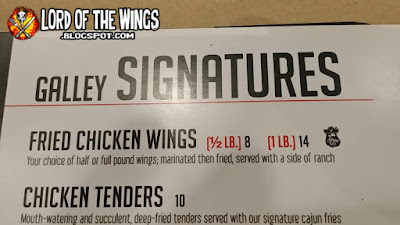 The menu isn't all boil - we found chicken wings and considering we were feasting and it was for my birthday, we ordered some wings. 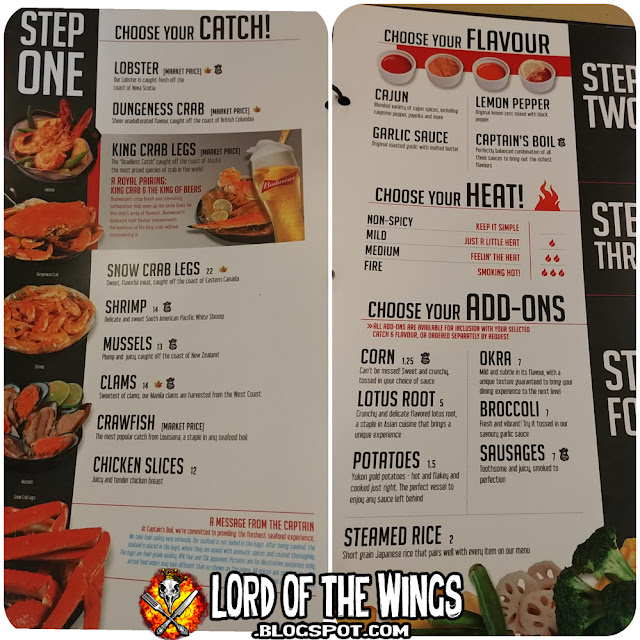 When it comes to the boil, it's a 4 step process:


LJ went with the Snow Crab ($22), Captain's Boil, Medium boil with Potatoes ($1.50). I went with Crawfish ($19), Captain's Boil, Fire heat, with corn ($1.25). As mentioned before, we also ordered a pound of wings, and a side of Cajun Fries ($6).  I should also mention or server Seryna who patiently explained the process to us - she was super friendly and great all around. She also moved us without us asking from a tiny little two seater table that was in between two 4 seater tables, to one of the 4 seater tables. That alone was just pure awesome. 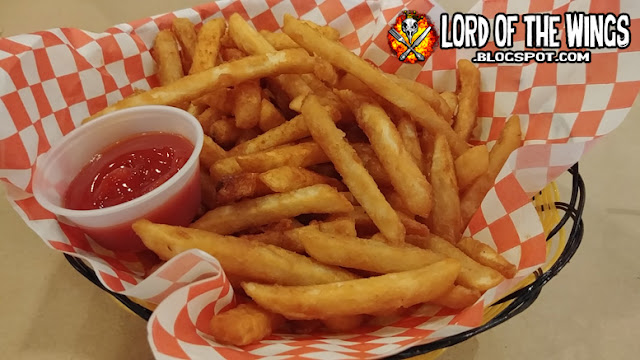 The Cajun fries came out right away. We wish they had come out with the rest of the food but what can you do? The fries are battered and fried and tossed in seasoning. They are very crispy and were pretty good. They also came with a cup of ketchup, I guess to as to not clog up the table with a bottle. 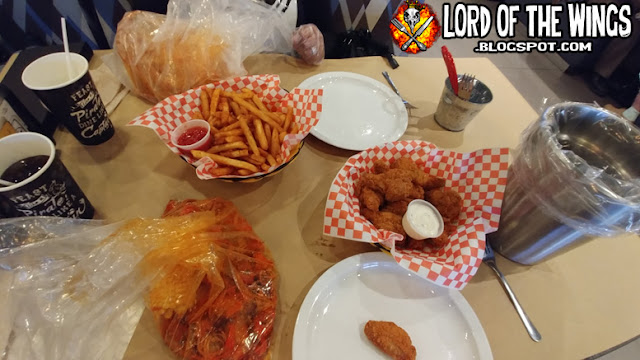 Shortly thereafter the wings came out, followed by our seafood bags. There was also a shell/bone bowl and a small pail of a fork and scissors for LJ to open her crab. The table is also covered in butcher paper, with the idea that you can eat the food right off the table. We did ask for plates and forks to help make our experience a little easier, but most people don't do this. 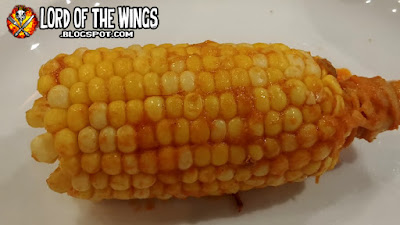 Before I get to the seafood, I also added corn to my order. I wasn't sure how they were going to serve it, but it came out as a half cob. Kinda disappointing but not terribly so. I got it in the bag so it was soaked in Captain's Boil sauce. It was good corn. LJ got potatoes and they were just boiled and season infused. 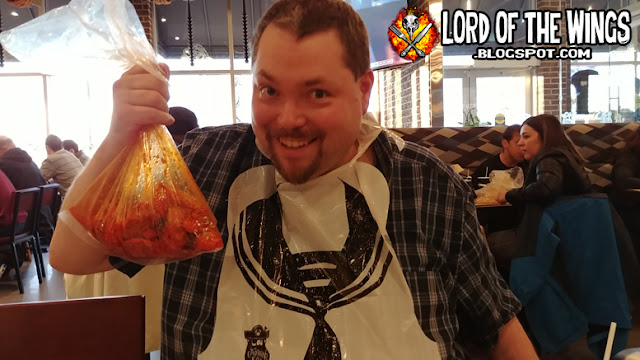 I won't lie, it was an exciting first time experience. That's me with the seafood bag. I forgot to mention they also give you plastic bibs, and clear plastic gloves to eat the food. I have to say I was a little off-put by all the disposability and waste of the experience. Plastic bibs, plastic gloves, plastic bags, paper cups, paper table. It's all food grade quality so it's safe, but it is wasteful. I still ate it, but it was something gnawing at the back of my mind. 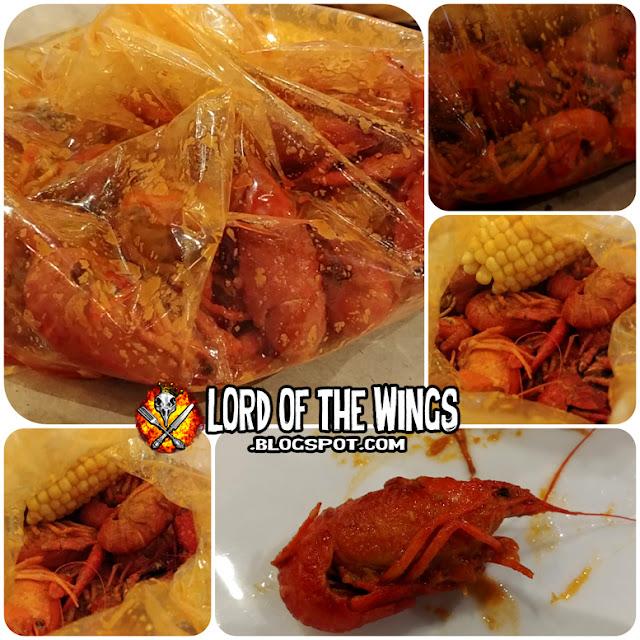 It was weird eating out of a plastic bag. I mean, it's just all in a bag. But I like that everything is thoroughly coated in sauce and seasoning. I was excited about the crawfish, and there were like 15-20 in the bag. 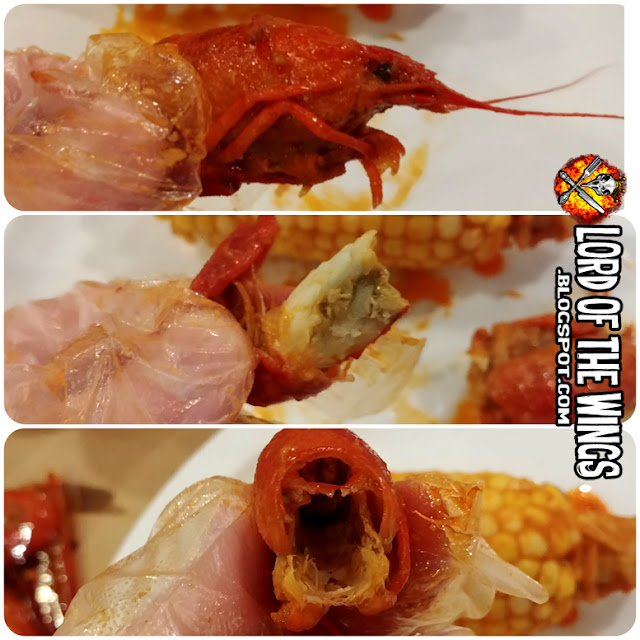 Now I've never had crawfish before (maybe you've also heard them called crayfish, craw-daddies, or mud bugs) but they look like a miniature mix of a shrimp and a lobster. They aren't much longer than my finger. Seryna warned me that there isn't a lot of meat in each one before I ordered (people complain I think) but because there are so many there is enough meat for a moderate appetite. To eat them, you pull off the head - I was told there is nothing in the head to eat, so discard that. The claws also are too small for meat, so into the trash they go too. 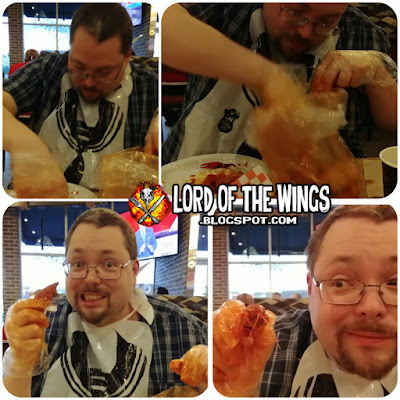 Then you try and pull out the tail, where all the meat is. The piece of meat that comes out varies from each creature, but it's basically about the size of a quarter. The head comes off easily (and usually with a bunch of seasoned juice) but getting the tail off from the back legs was a challenge. If you are squeamish at all, this is not an experience for you, FYI. 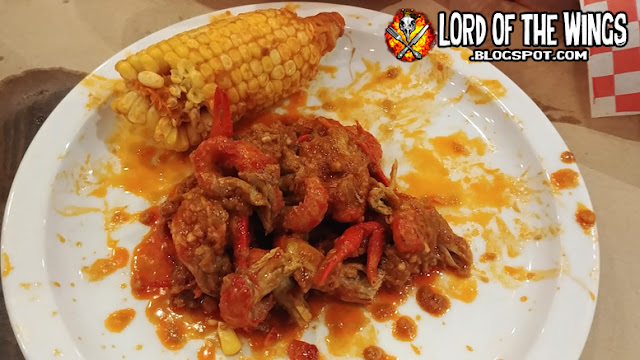 I ate one or two, very slowly, after I finally developed a strategy; I pulled out a crawfish, pulled off the head and put it on my plate (to let the juice ooze out onto the plate). Then I pried the tail meat out and discarded the body into the shell bowl. The meat I dropped back into the bag to keep warm and absorb more sauce. After de-shelling all the crawfish, I put the heads into the bowl, mixed up the bag and poured it all out onto the plate into a pile. Then I was ready to go to town - I removed my plastic gloves that had slightly filled into the gloves some how. I cleaned off with the napkins, and then used my fork to eat somewhat civilized. 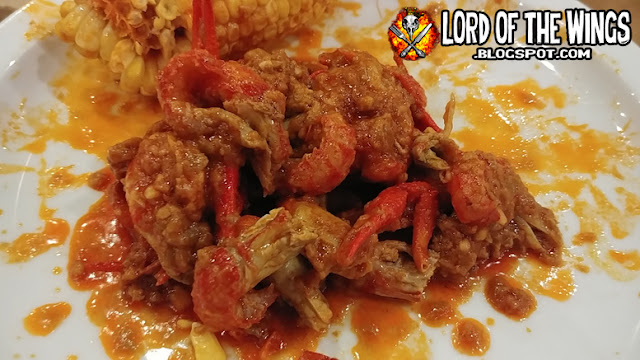 The meat has the same consistency as shrimp. It's tender, but it also has a bit of chew. There were two very distinctive flavours going on here: the sauce, and the crawfish itself. The crawfish itself was super fishy. Like strongly fishy, and I was not a fan. I expected more of a shrimp or lobster, or even crab-like flavour, but I just got a big dose of fishy. If this is what crawfish is normally like, I would pass in the future. But something tells me that bayou crawfish doesn't taste this fishy. LJ had the same experience with her crab that I tried and found really fishy too.

As for the sauce, wow. Amazing. You got all those notes of garlic, lemon pepper, butter, paprika, peppers and hot sauce. The garlic was very sharp and stood out, but so did each of the flavours. It was rich and spicy and was great to dip everything into. It was complex and layered and was really good. 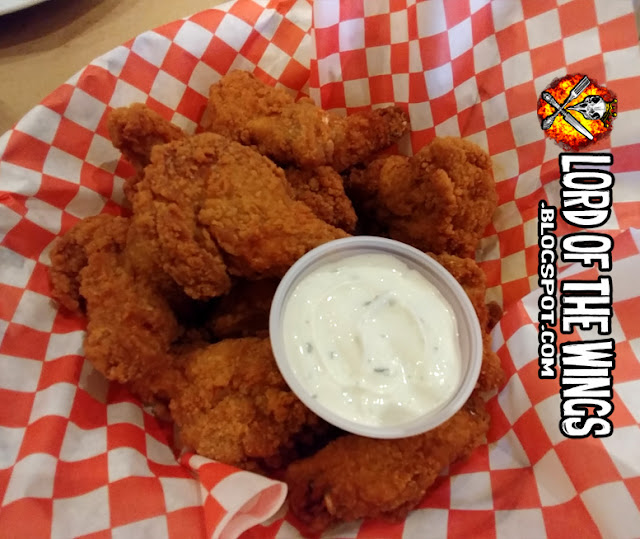 The question was, how were the wings? 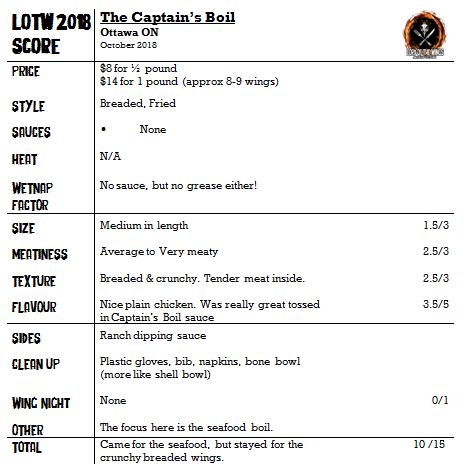 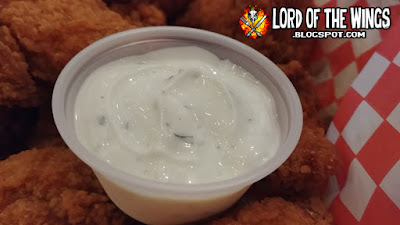 The wings come in orders of 1/2 pound and full pound, a full pound being about 8-9 wings. They also came with ranch for dipping, which was a great little ranch. It tastes commercial, but it was creamy and light tasting. 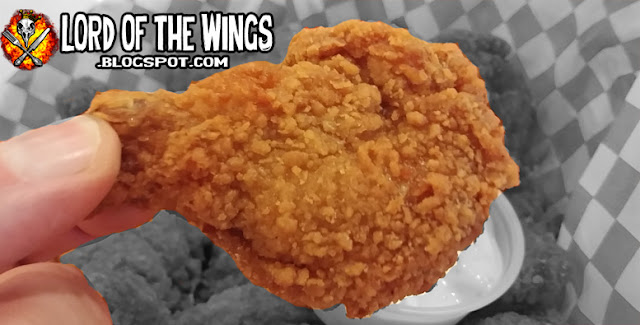 Size wise the wings are about a medium in length - they don't stretch out very far. But in terms of being meaty, wowsers these were big. I mean some were average to the small length, but many of them were bulging with meat on them. They are breaded in a crunchy batter that adds to the size, but they are still really frick'n meaty. 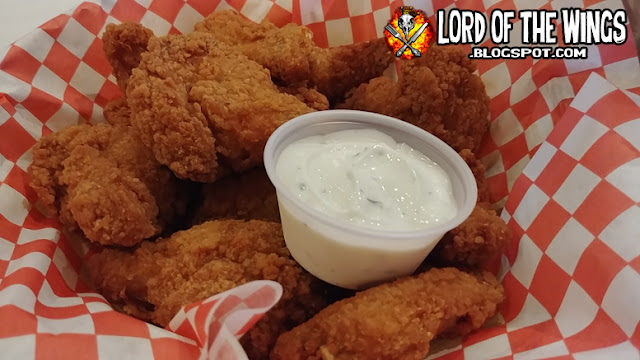 They came out hot and fried just perfectly. There was a crunch when you bit into them, but they were fresh enough and fried just right that you could pull the bones off the meat without effort. 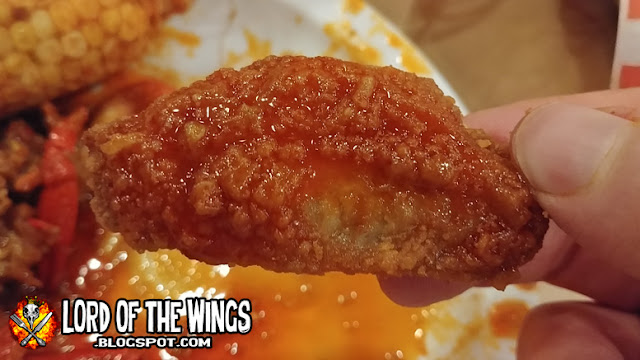 I dredged those chicken wings through the sauce on the plate like it was nobody's business. The breading sopped up the sauce without losing that crispiness, and it elevated the wings to another level. As mentioned before, the sauce was spicy, but not killer hot as advertised. I mean you've got hot sauce and butter, but also garlic and spices. It was so good and LJ and I agreed we'd come back just for the sauce and the wings. 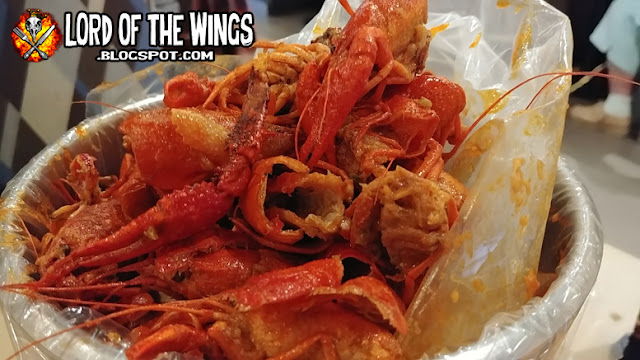 The experience of The Captain's Boil was cool and different. I like the hands on, rip'n and tear'n, dunking and sucking spices and all the flavour. The sauce was amazing, but the actual seafood was just to fishy for LJ and me. The fries were crispy good, but the wings were also really well done. Plain, but fried just right and crispy. And then you mix that into the Captain's Boil sauce and you've got a great wing experience. We both said we would go back, but we'd skip the seafood (I'm not giving up on having an authentic crawfish boil in Louisiana one day) and that we'd just have the wings with a side of Captain's Boil sauce next time. If only they had a wing night.    ...   10/15 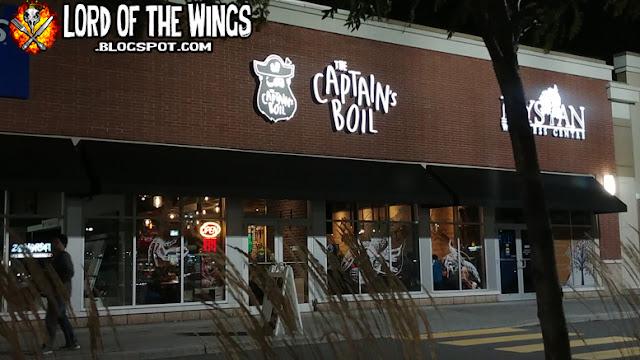 The Captain's Boil
290 West Hunt Club Road, Ottawa, ON (and other locations)
thecaptainsboil.com 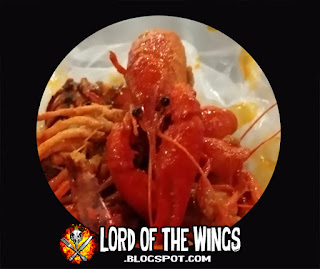