While visiting LJ in Ottawa, she had to travel to Belleville for work. So I decided to tag along and look into some local history. First I went to the Belleville Chamber of Commerce and tourist info cabin. Then I went to the Canadian Forces Base Trenton which has the National Air Force Museum. After lunch I went to the Belleville Armory which has the Hastings & Prince Edward Regiment Military Museum. Then I went to Glanmore National Historic Site, a historic house restored from the 1800`s. It was an afternoon of history, learning and respect for those that sacrifice for our protection. 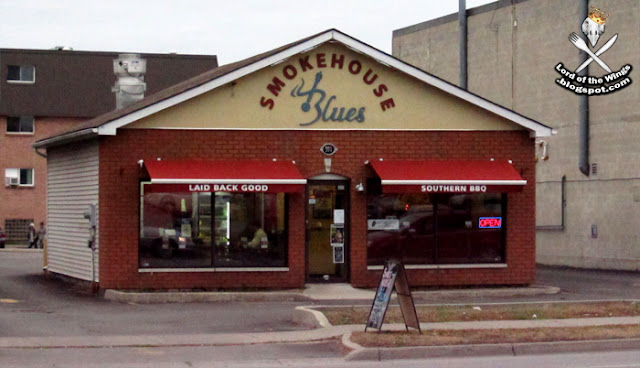 In that busy day, I went for lunch. LJ had to work through lunch, so I went to a place across the street from where she was. I immediately remembered Signature Blues from Wilfred Reinke, the Oshawa Ogre who reviewed it on his blog earlier this year. I was hungry and I could definitely go for some BBQ. 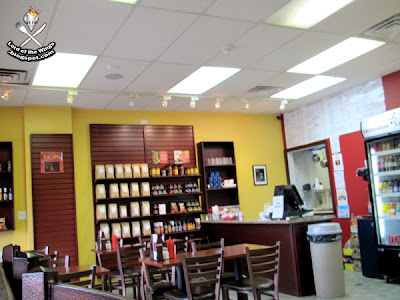 This is mostly a take-out joint that has a few tables and high-counter seating. I was surprised how quiet it was at lunch, but they were getting phone-in orders. The smell of BBQ was in the air, and I really had to take in the whole menu.

I was hungry, wanted to do some sampling, but not spend too much. They have your standard ribs and brisket, chicken etc, but unique items like potato nachos, sandwiches and their Pulled Pork Parfait were also tempting tasting grounds. 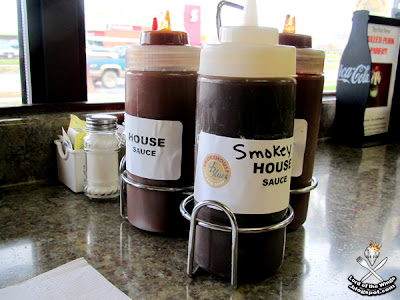 The good news was that I was going to be able to add whatever sauce I wanted on after I was served, because the tables all have extra sauce bottles for sampling!

Then I found the perfect combo for me: Combo Plate A 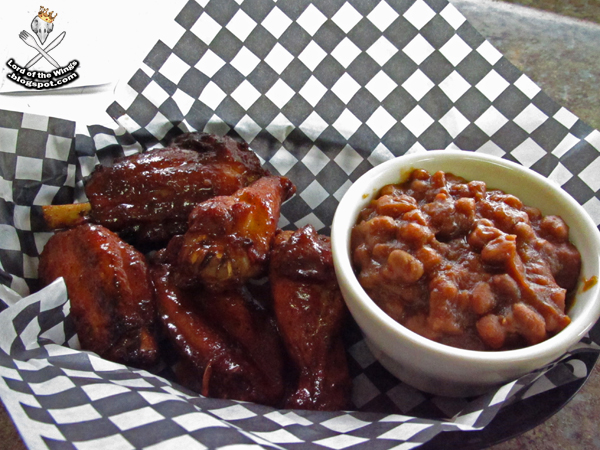 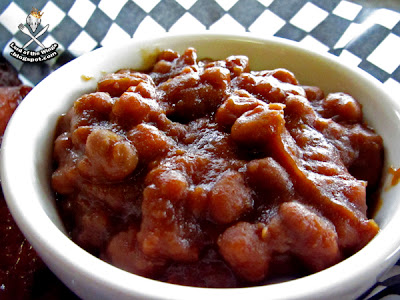 There were lots of tasty sides to choose from:  fries (both potato and sweet potato) slaw, cornbread, etc but I thought beanse were the way to go. And boy was I right. These beans were smokey, tomato sweet, thick, mushy etc.  Hands down one of the best beans I've ever had. Perfect on a slightly cool day. 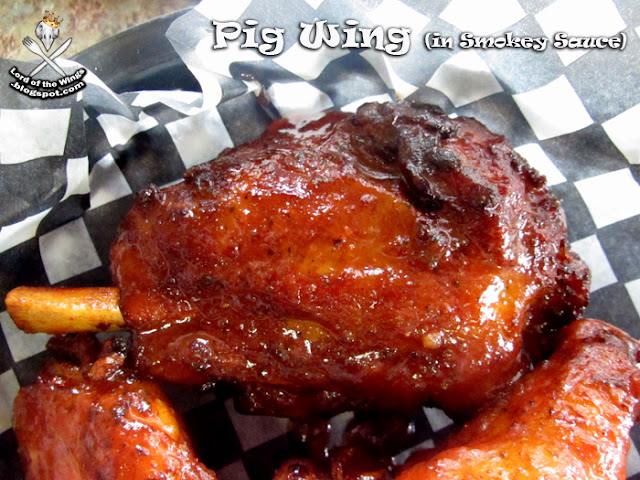 What is a pig wing? Take a meaty pork shank (part of the leg), smoke or braise it, then deep fry it and toss it in sauce. Smokehouse Blues gets their Pig Wings packaged and then just deep fry for service.

I got my Pig Wing tossed in Smokey BBQ Sauce, which is a "Kansas City style traditional BBQ Sauce with a hint of Guinness Beer". 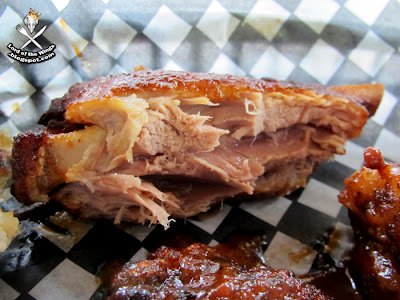 The Pig Wing was super tender and meaty. The sauce had a nice hint of smoke, and not too sweet. This was a great wing concept and well executed. 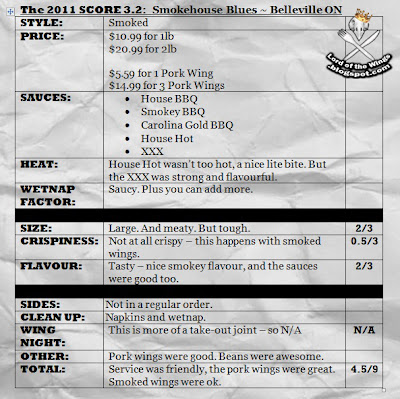 A normal order of wings is about a pound, but I was ordering Combo Plate A where there were just 4 in an order. 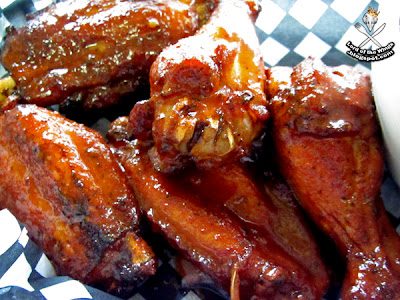 The wings were smoked and then tossed in sauce. The wings looked absolutely gorgeous. Nice and saucy. too 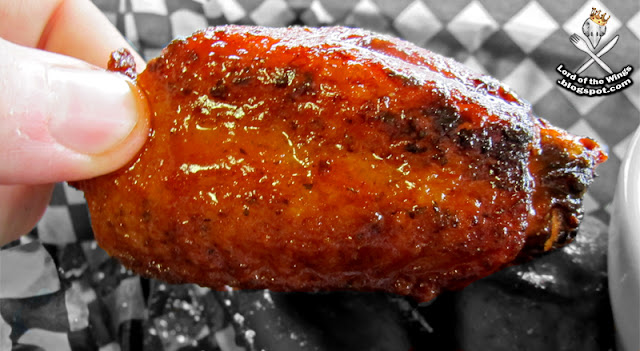 These were pretty big wings. Very meaty. They were not crispy though. This is a challenge for BBQ smoked wings. It also lead to some very tough wings. Each bite was a difficult and I had a hard time pulling the bone from the wing. This was the only downside to these wings. 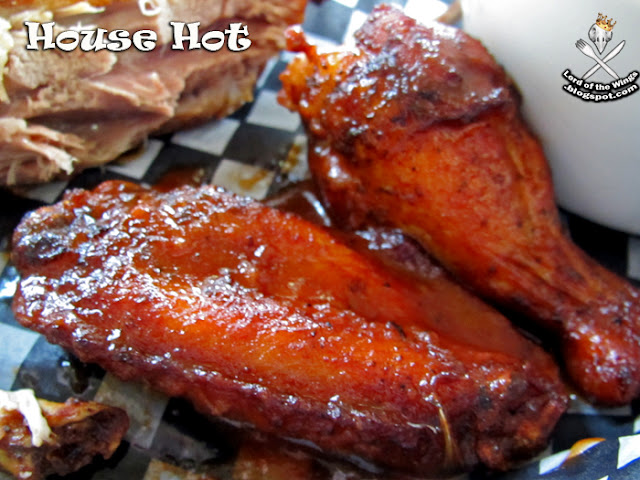 I went with the House Hot for the chicken wings. "Our House Sauce with some heat. Starts Sweet, finishes Med Hot." This was an accurate description of the sauce. It wasn't too spicy, really a medium heat like they state. Before ordering the wings my server let me sample the sauces, and when I sampled House Hot, it had a lot more flavour, but on the wings they didn't stand out.

HOUSE
I squirted a little on another wing as well. "Our own sweet, tomato based North Carolina style BBQ sauce."
They said it was sweet, and yes it was. Too sweet, too sugary for my liking. 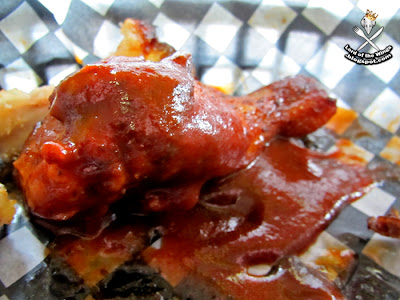 FINAL SCORE: Smokehouse Blues is a great little BBQ joint. Staff was friendly, the food was good. I was really impressed with the Pig Wings and the beans. The wings had a good flavour, but they were tough. I liked some of the sauces, and not others, but that's ok. Next time I would have the Pig Wings for sure, but I'd like to sample some other options. 4.5/9

Plus, Belleville is a nice town with a lot of history. Go check it out. 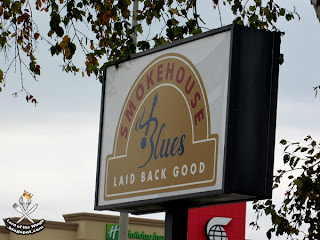 Smokehouse Blues
300 North Front Street, Belleville ON
smokehouseblues.ca
Posted by Lord of the Wings at 11:21 pm

I enjoyed your views on a place that I went to a couple of times, the second time I had their sliders got the 4 pack one of each meat, really tasty :)

@Oshawa Ogre - thanks for letting me know about them in the first place!

Good to know the next time I'm in Belleville.

I want to try the pig wings. They sound good. We may have to make a side trip down here next time we're visiting up in Madoc/Eldorado


@Swordsman - I fell in love with the pig wings, it's worth the stop!

Odd, the last thought that comes to mind when I think of Carolina sauce is "sweet". Usually it's all vinegar and red pepper as the predominant tastes.

@Chris - you right - the sauce is not at all what I think of as Carolina sauce . . . we still need to keep learning about good American 'que up here!

Belleville is a growing city that takes pride in our community, culture and heritage. The city's urban core is surrounded by rural landscapes. Global Visas assisting our individual and corporate clients with our team of highly qualified and friendly experts. Picturesque farms and protected natural areas can all be found at the end of a growing network of urban and rural recreation trails.

@gherlashdawn - Belleville is a nice town.