Just before the Canada Day long weekend, some collegues of mine organized a small retreat out at the University of Toronto Mississauga campus. It was a great 2 days of collaboration, goal setting and planning on a campus with lots of trees and deer everywhere. Work yada yada yada  the best part was going to Mandarin for lunch buffet, and then everyone going 'we should go for wings for supper'. How can I say no to that? 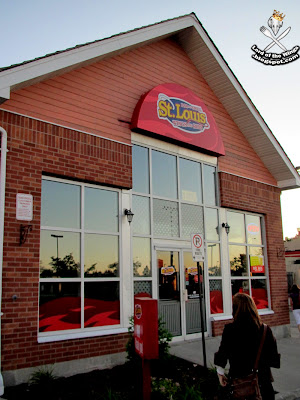 Not far from campus was St Louis. I've reviewed one location St Louis in the past and they weren't my fave. But I won't lie, I had been back to that location (this chain has exploded like crazy) and I had some good wings, so I thought it was time to re-review this wing chain. St Louis can be divisible amongst wingists - purists say no because they are not traditional wing (I used to be under the perception they were a baked wing, but I was wrong), but others love the unique flavour that is produced through the marination and the style of sauce. 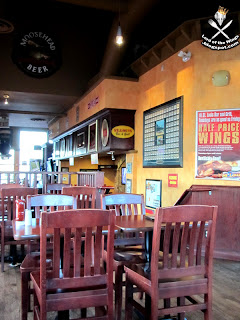 This particular location was quite strange in that the building was built in a box store mall, but, like in the middle of the parking lot thoroughfare/street, so it's tall and narrow. There's a little balcony off the back with a patio. The place was pretty empty on a Wednesday night so we pretty much could sit where we wanted. 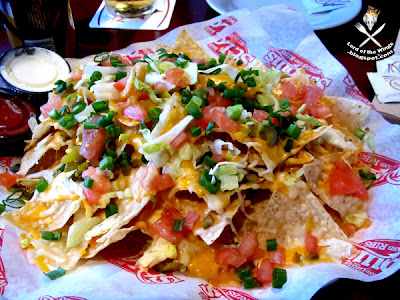 The menu was looked over and it was clear we were all going to have wings. But to suppliment that, several of us shared a platter of nachos. 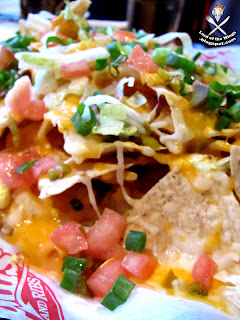 It was a large pile of nachos. Lots of toppings, with sour cream and salsa on the side. No guac though. They also use queso/cheese sauce instead of shredded cheese - which depending on your tastes is plus or a minus. Also noticed they used triangle chips compared to the round chips of years ago. 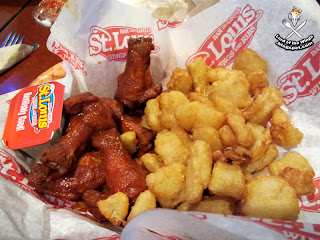 Our waitress Patricia was friendly. She took our orders and after a bit all our wings started coming. By the end of the evening however she went missing in action delaying our eventual departure by a significant amount of time.
I felt a little centre of attention talking about hot wings, the blog, judging and all things wings. This was a great crew because everyone likes wings and everyone was up for having photos be taken. 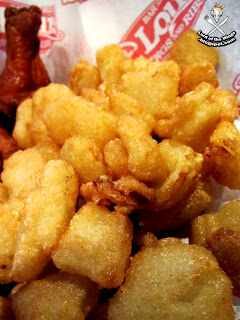 Back to St Louis wings, an order of wings come with a side of fries. Some of our crew substituted for salads, and some followed my suit in ordering their onion chips. I love onion chips - little golden nuggets of goodness. 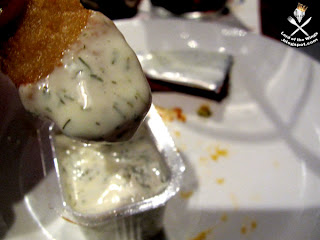 The wings come with St Louis famous packaged dill dip. Not bad with the wings, but great for dipping the onion chips in! 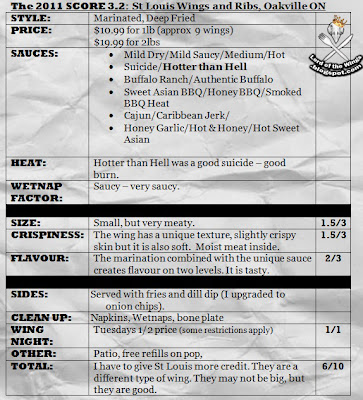 Wings come in orders of 1lb or 2 lbs. We were hoping for some sort of platter deal for the group, but they didn't have any. 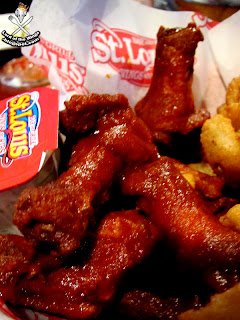 There are 16 flavours of wings. The wings themselves are marinated in a 'signature' spices before they are deep fried, then tossed in sauce. 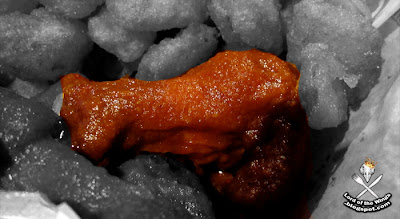 The wings are small to medium sized wings in length. However they are very meaty wings and the chicken itself is very tender. The skin is crispy, but slightly softens as the sauce is thick.

Most of the group went with either mild or medium. Dave went with Suicide. I went with their hottest, Hotter Than Hell. Some wing swapping went on, and some people felt the burn of Hotter Than Hell. It isn't the hottest sauce I have ever had, but I have to admit it has a good kick with a lot of flavour.

The sauce at St Louis is thick like a BBQ sauce, but it has unique spice flavour to it. It really is not like any other wing. 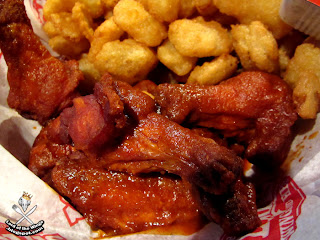 FINAL SCORE:  I'm still not impressed with the size of these wings. Not the smallest out there, but not impressive. They are crispy yet tender inside. The sauce is unique and does not taste like your standard wing sauce. Some won't like it, but I have certainly come around to it. They wouldn't be my go-to wing, but I can appreciate them. 6/10

As for the group - lets do another wing work retreat soon! 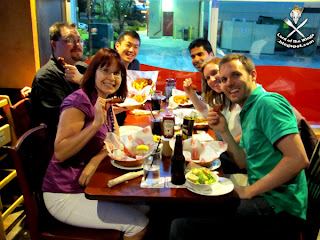 St Louis Wings & Ribs
2508 Hampshire Gate, Oakville ON (and other locations)
stlouiswings.com
Posted by Lord of the Wings at 10:28 pm

St. Louis like any place will always have its detractors. But I consider their suicide wings with the onion chips and dill dip to be real comfort food.

@Anthony - I hear ya. It's a different type of wing, and once one accepts that, then you can enjoy.

I've never had anything but wings at Saint Louis.

@Teena - not even onion chips?!

What a fun work crew.

So do they actually fry them or do they use some other cooking process. You had me wondering after you mentioned thinking they were baked.

@Chris - They are - I wish I worked with them on a day to day basis (we all represent different divisions).

The wings are deep fried - they are just marinated before, and the sauce is a very thick sauce vs a traditional hot sauce.