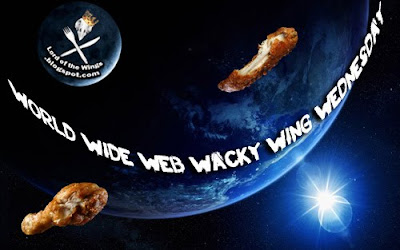 Yes, World Wide Web Wacky Wing Wednesday. WWWWWW. This is where I will surf the Web, and find other people talking about chicken wings. The world is full of chicken wing stories, wacky and otherwise. Recipes, restaurant reviews, eating contests or whatever. Today's Blog relating to wings in some shape or form:

"Put your Barbecue Shoes on because we're cooking up some delicious, and real easy to do Old-Time Bar-B-Que and Grilling recipes." 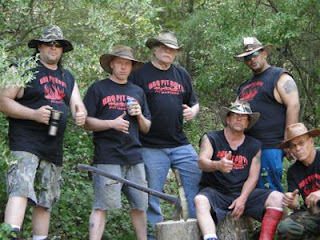 I've been following these guys for a long time. Their Youtube channel has grown a cult following. You can tell they have fun and love food. Their videos and recipes are simple, and there is not a lick of pretentiousness to them. Their cooking videos are simple and to the point: an individual (face always covered by hat and sunglasses) cooks, someone videotapes, all with a gruff but friendly voice narrates the instructions.

Their cooking is 'down-to-earth' and the recipes range from ribs, roasts, briskets - they were also the first to introduce me to BBQ'd bologna! But what brings me to them today are their wings. Here is their 'Buffalo Wings' done on the grill:

Ok I have problems calling this 'Buffalo Wings' (a Buffalo Wing is deep fried and tossed in butter/cayenne sauce/vinegar) and these wings aren't tossed at all, and you can't grill them - but they say that it adds a "country flavour." Wings still look good though. Dang!

These guys are creative if anything. The food is not good for the heart, but good for the soul. Case in point, here is an interesting recipe for 'Bacon Cheddar Cheese Wings':


Wow - what a recipe. Bacon-covered chicken, mixed with cheese, then hot sauce. Those are some big wings too! I have to admit though that I don't know about cheese and chicken . . .

The only thing that scares me about these guys is certain sanitary elements. I mean, they have raw chicken on that cutting board and I never see it getting washed. But hey, they are still alive and making great food!
Posted by Lord of the Wings at 11:45 am

I've watched a bunch of their videos. Call me dense, I never realized it was more than one guy, since the voice always stayed the same. Hilarious.

Chris - it's funny, I always thought it was the same guy hosting and narrating . . . I;ve never seen anyone else either!

yea, these guys are pretty awesome. i been following them for awhile myself...

Teena - Ya, I'm not a big fan of chicken and cheese together. But chicken and bacon . . .


Curtis - They are very entertaining!

I'm torn on the bacon and cheese wings..it certainly has some potential but unfortunately it also has bad potential as well, part of me so needs to try these.

Jason Wayne - I feel what your saying man. Maybe we should all eat them and see how they work . . .