Life is good when you have wings thawed from the freezer. Ok, fresh wings would be much better, but you go with what you got. I wanted to DF these wings up right, so I dusted them in flour and got them ready to go. 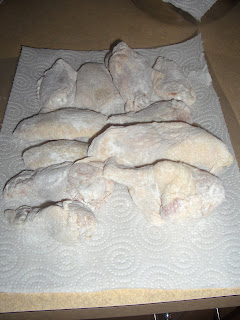 However, I've been doing the traditional butter wings lately and wanted something different. A month or two ago in the store I came across a new hot sauce: Valentina Salsa Picante. Lets break this sauce down first: 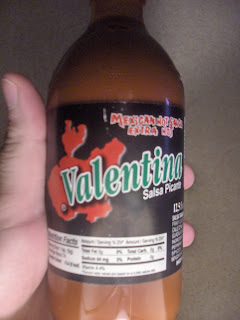 It says salsa on the side - but this was really a hot sauce. There are no chunks of anything. If anything, this is Salsa Roja, or "red sauce" a hot sauce condiment more than a true chunky salsa.

When I popped open the bottle, the aroma of the chili pepper hit my memory files. They say memory is tied to scent, and I remembered having this sauce. Its been used as a suicide sauce at some pub that I have been to, but where? It has a nice light burn that really gets to the back of the throat. This is a great 'suicide' sauce for beginners, who want to feel like they can eat really spicy (when its not). The flavour doesn't really stand out, but it is nice. It might be good on Mexican food, something that doesn't overwhelm the taste buds, but adds a little snap of heat. But on wings, more of the flavour comes out as its not competing with guacamole or taco meat. 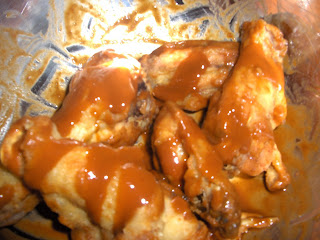 I actually split my wings in two to have two flavours of wings. I wanted the spicy for sure, but then I had my spicy BBQ. Although its not complicated, I'm not ready yet to give away my spicy BBQ secret. What I can tell you is that it is very close to the Spicy BBQ at Duff's. 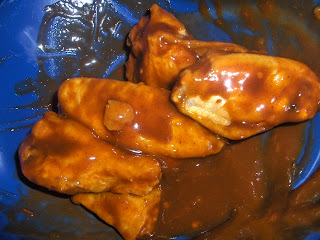 I also sliced up some potato in an attempt to make my own homemade fries. I love fresh cut fries from a fry wagon with the skins still on. Mine, on the other hand, did not turn out right. Oh they looked perfect to me - but the potato itself I think needed to be soaked in water longer than I did. 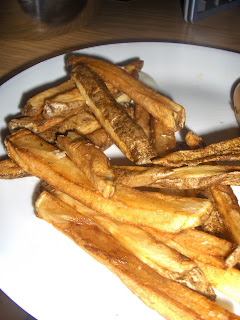 So as for Valentina Mexican hot sauce, its worth checking out. It wasn't expensive, has a nice flavour, little kick - and could go well with a mixture of meals.

In Spanish, salsa means sauce. "salsa picante" means hot sauce.
It tends to be a bit too salty sometimes, though.

Thanks for the info!

So did you just fry up the wings, and then toss them in straight, unadulterated Valentina or did you cut the sauce with butter, as with buffalo wings? Also, thoughts about preparation of wings with this sauce using a low oven or crockpot?

Ya, deep fried wings, then straight Valentina. For some reason it never crosses my mind to make a buffalo-like sauce with butter other than Frank's. But there's no reason I couldn't do it with Valentina. When I did this recipe, I only had access to a toaster oven, hot plate and a deep fryer, but using a crockpot with this sauce is not a bad idea . . .

Great recipe! Finding that Valentina hot sauce can be tough though, especially on the East Coast. I sell it on my website for a good deal if anyone needs any!

I just bought a 34 ounce bottle of Valentina hot sauce for $1.80 at Wal Mart food store area. Here in Massachusetts. Awesome price. Cholula was over twice the price for a small bottle. Next time in the store I will get a gallon of this. or 4 bottles.

@SalsaNachos - thanks for helping out!

I live in Mexico and that extra hot valentina it isn't for beginners and if you want to know how good it taste just try the one with the yelow label instead of black! It's so good on fruits, popcorns all kind of salty finger food! (to reduce the salty/spicy flavor just had some lemon)

@Anonymous - Good to know - I'll keep a look out! Thanks