Wow, what a weekend. It was all about Dude, who is headed back to China next week AND it was his birthday weekend (Dude came down in September and we had wings HERE, HERE and HERE). I had to go home to Tillsonburg and see him before he left. For dinner, we went to a new place that he had been to 3 times already (the last with Brad and Mike M).

The Mill Tales Inn is a new hotel/restaurant in a former mill that has been under renovations for what seems like forever. Years for sure. But the place looks great. Their website did have a history of info on the Mill, and when they restore that info, I'll give you a low-down on what this place was all about. 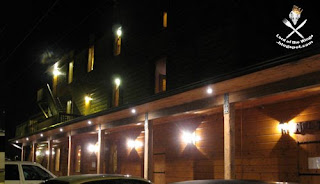 When we arrived, it was busy. Old people busy. The crowd was predominately seniors. Man was it busy. When something new opens in T'Burg, it's a big deal. 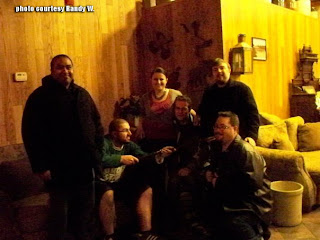 As a group of six (in photo below, Rick, Mike, AJ, Brad, Randy (Dude), Wing King) we were told we would have to wait. It was about 15-20 minutes, and there was a group of 6 ahead of us. Some of us took to couches, some to a bed in the lobby. 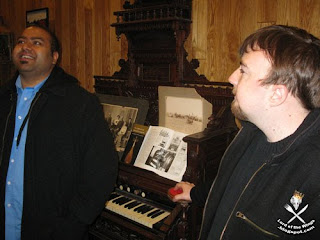 Above Rick and Randy can be seen in front an antique piano, with lots of old photos of the founding Tillson family. The whole lobby has lots of bits and pieces of history of the town, of the mill (or mills in general). It was rustic but new in the overall look.

Our waitress was Heather, a fun and friendly waitress that Mike, Dude and Brad had the week before. They told us stories about her interacting with them, and she definitely made us all feel like regulars. Unfortunately she was busy with other groups and tables, so we saw her sporadically. 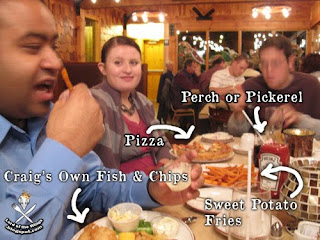 The food was generally good. Most items were homemade (including the French salad dressing, and Belgium Potatoes, which I inquired were mashed potatoes with shredded carrot and cabbage if my memory is correct - Heather refered to them as "old people food"). Rick & Brad both had fish and chip dinners (the owner Gordon Craig is famous for his fish and chips at a former restaurant). AJ went with the pizza which was almost deep dish. Crunchy, sweet potato fries were also a popular appetizer. 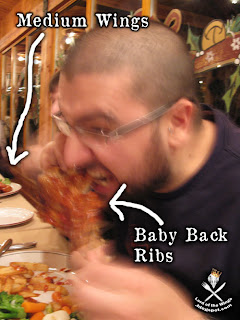 Mike had the ribs (which were not grilled or bbq - at best they were baked). Dude and I both got the wings. The trio who had been last week raved about the wings, and Dude was concerned whether they would live up to my scrutiny. 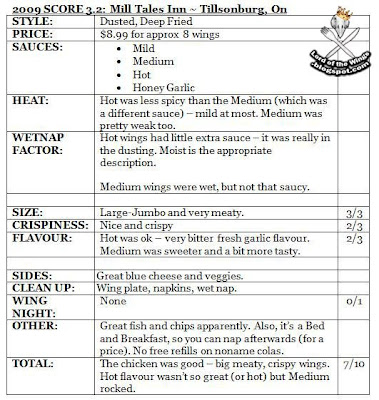 The chicken wings, known as 'The Milled Wings', come in an order of about 8 wings, with celery, carrots and blue cheese dip. Classic. 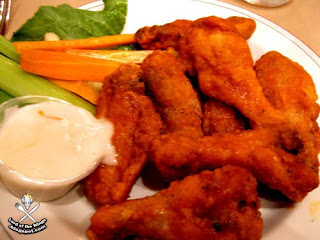 The blue cheese had lots of chunks and it seems like forever since I've seen it as a dip with my wings. 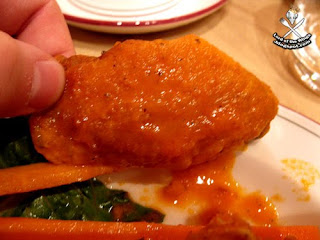 When the wings were put in front of me, I was impressed with their size. They were large to jumbo. But that large to jumbo sized wing made me fear a tough, rubbery chicken meat. Nope. Cooked just right. I'm pretty sure its a fresh wing, not frozen. 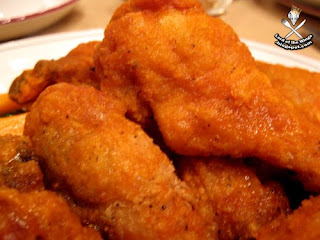 The skin was crispy. They dredge the wings in flour before deep frying, which leads to a very nice skin.


In terms of their sauce, I went with Hot. Well, it wasn't hot at all. Actually Dude and I did a wing exchange and his medium had more spice. They were two different sauces. Mine was more of a classic Buffalo sauce with Butter/Cayenne hot sauce, but there was also a piercing, bitter garlic flavour from actual garlic. It was ok as a sauce. And there wasn't enough - I would like my wings more wet. 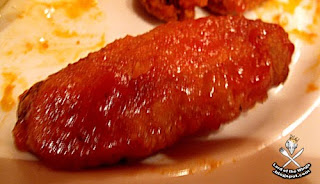 Above is one of Dude's Medium heat wings. The sauce was more of a sweet sauce, and as stated above, more spicy than the hot. It had a really nice flavour. If I have wings here again, I would go with the Medium - better taste, more heat. Maybe the homemade Hot was just off this night. 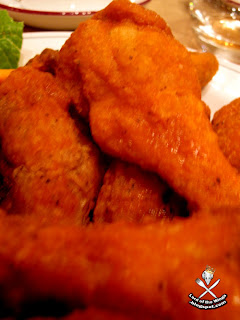 FINAL SCORE: There were lots of little technical problems with the restaurant, but the place is still fairly new. When it came to the food, I think everyone was happy. The menu is very varied, clearly as the place appealed to those in their 70's and those in their 20's. The wings were surprisingly good and definitely make themselves a contender for the title of best wings in the 'Burg.

We headed out to a local bar (where one of our members was cut off before 11pm) and then to another bar to celebrate Dude. It was a great weekend, and Dude, you will be missed. Safe trip back to China! 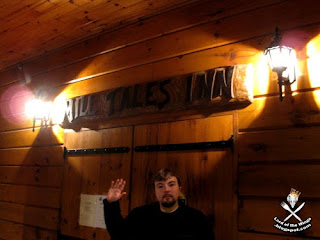 Good luck to Dude! It looks like you guys had lots of fun.

So you won't admit to being the one cut off before 11pm? heh heh.

Damn what a fun looking night.

Lord of the Wings said...
This comment has been removed by the author.
10:51 pm

DLB - We did have a lot of fun. Good, but bitter sweet.

Chris - No, I was the DD that night. And I won't lie, I was very busy with some crazy activities. There was the cut off, the police, and one of our own drunk and on the run in the streets that we had to search for. A night to remember for sure.

BLACK ANGEL!!! Thanks for stopping by - glad you stopped by, its been a long time!

I had a terrible experience at The Mill Tales Inn
After having 2 beers with the owner and his
friend 2 months later I was harassed, and abused by the owners
wife.

@Anonymous - but what was the food like? How did they harrass and abuse you? I'll be honest, this situation sounds a bit fishy ...