I like to support small business when I can, but I still buy a lot at big business, and Costco doesn't get much bigger. I mean, where else am I going to get an 1.9 litre jar of mayonnaise? Or get free samples on every visit? Or cheaper gas?  Don't get me wrong, I also HATE Costco. Well that's not the right word, I hate the PEOPLE shopping at Costco. Rude, self-involved, unaware. Drives me insane how people smash into others with their carts, or stop right in front of others, or block aisles etc. Costco is definitely a get-in-get-out experience for me. 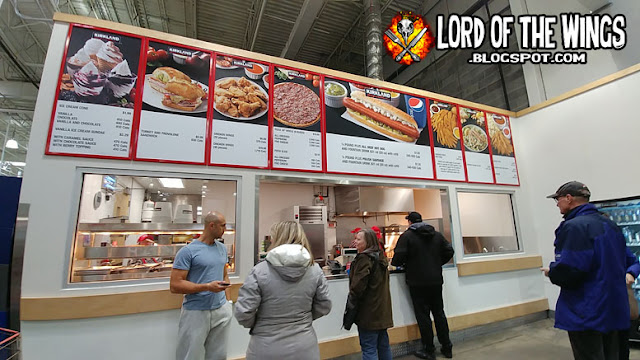 One more aspect I do like about Costco is the food court. You cannot beat $1.50 for a jumbo hot dog and unlimited pop. Or a giant poutine. I actually overheard a customer and clerk talking and both agreed that they love the turkey sandwich but that there was too much meat. Too much meat. On a sandwich.

The prices, and the menu, rarely change, but about 2 years ago select Costco's began selling chicken wings. I say select because I have been to about 6 different Costco's in that time and I think only 2 maybe 3 had the wings. These are not the frozen wings they sell in the store, or the to-go ones I reviewed years ago near the rotisserie chickens. I was super excited to try them when they first came out and at first I liked them. Then the next time not so much. So I decided to give them one more try at least and do an official review. 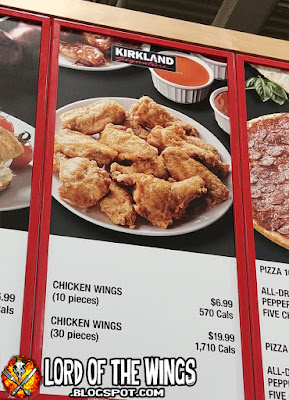 The wings come in either at 10 piece tray or a 30 piece bucket. I was there for lunch and did my best to resist the 30 piece bucket. I had to wait 3 minutes on a fresh batch of fried wings, but that's ok because I'd rather have freshly fried than heat lamp warmed (which is what they do with the chicken until it is ordered usually). 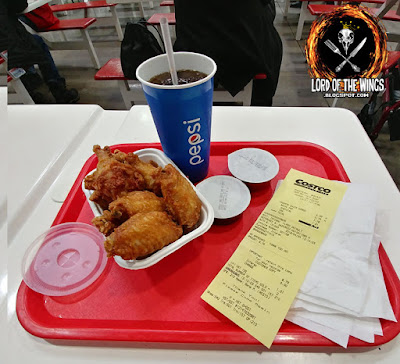 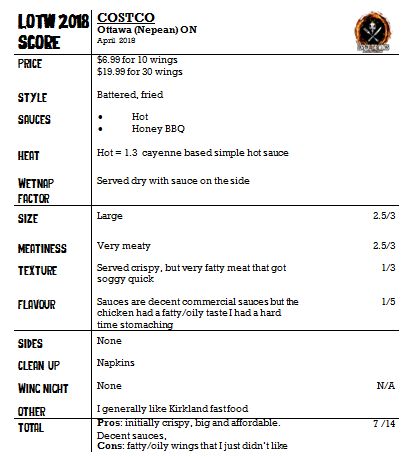 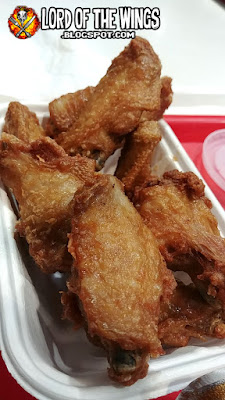 The wings come served in a cardboard/paper deep tray that they also use for fries in the orders of 10. The wings spill out over the edges, so eating these outside the cafeteria seating area is not recommended. If you go for 30 wings, they come in a bucket; much easier to transport. 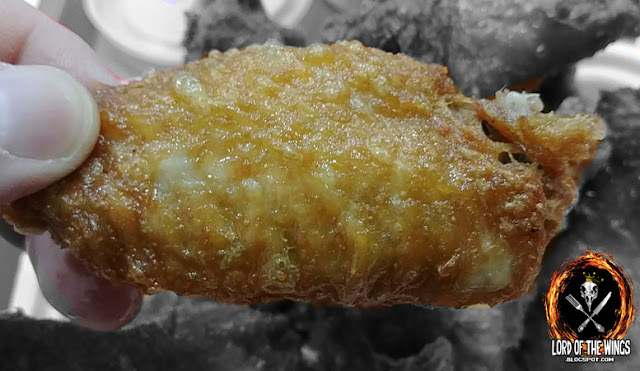 These are a large wing. You might expect fast food wings to be small, but I guess Costco doesn't do anything small. The are long, and they are also pretty meaty wings. They have a batter on them that reminds me of North American Chinese food wings. They come frozen and are deep fried. The skin and the batter get very crispy, but they are really oily and after a while, the skin is not as crispy. 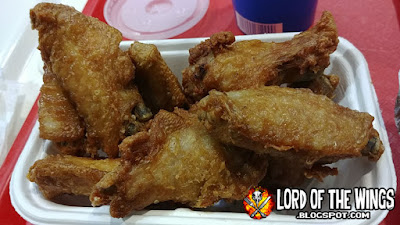 So far this all sounds pretty good - big wing, crispy skin. But something isn't right with the chicken. It's fatty in a way I don't usually experience with a chicken. The meat is tender, but it tastes, well, fatty. Oily. The skin absorbs too much oil? I'm not sure. For my previous tastings, I thought it might have to do with sitting around under the heat lamps and being old, but these wings were fresh from the fryer and almost directly into my container and again, I just found it to be almost inedible* 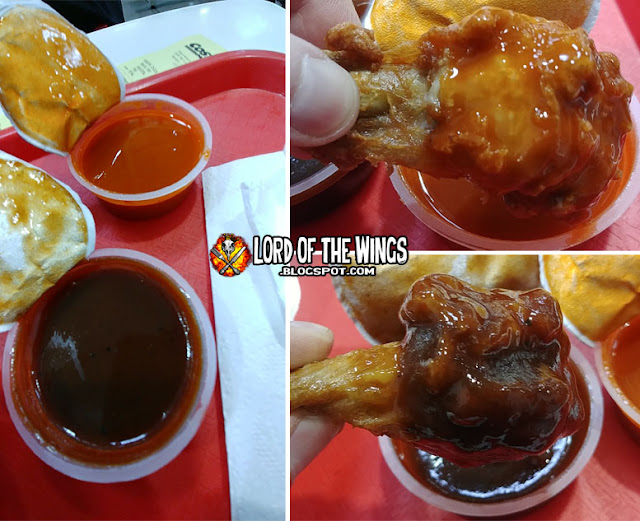 For an order you get a choice of Hot or Honey BBQ sauce for your wings. One container is enough sauce to put on an order of wings. I asked for 2 and had more than enough.

The  container is just labeled "Hot Sauce" but we are looking at a cayenne-based hot sauce. It's not Frank's, but it is good. It's got a bit of a peppery bite, nothing chili-heads will feel but those that are spice-intolerant will want to steer clear. It's good, but a full 10 wings of the stuff is too one-note for me.

This is a sweet, commercial tasting BBQ sauce. It's not bad like a budget BBQ sauce, but because of the sweetness I'm not thrilled about it either. 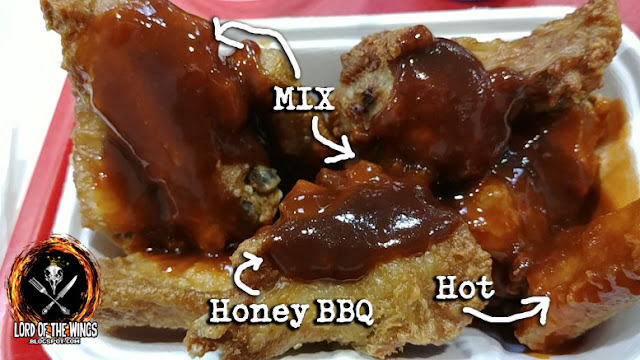 So what to do? Mix 'em!  I poured both sauces over them for sweet-heat. I wish I could cover and shake to properly distribute the sauce, but that wasn't going to happen. This made for a great sauce and helped the wings go down. 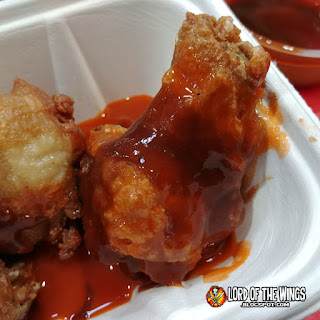 I want to be able to say that these wings are good. They have so many things going on for them that are great - large wings, crispy skin, tender meat, decent sauces and a decent price. But the oily, fatty tasting chicken was just a huge turnoff, that I can safely say I am not going to have these wings again. I want to, but unless something changes, I'm over them.  7/14 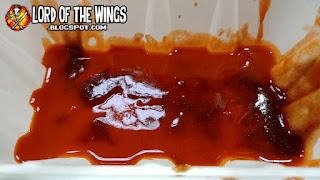 I agree with you on the oily and fattiness of the meat. The first couple of wings seems ok but just after a few you start to notice a texture change.

@Unknown - ya, I keep wanting to get them every time I'm hungry at Costco but I keep coming back to that internal greasy issue. Thanks for commenting!

Interestingly, the wings sold from the food court are not available for purchase in the warehouse. I contacted them to ask which brand it was that they used because I'd like to be able to make them at home. The response was that they are not sold anywhere but the food court... so... not Kirkland wings?

@Anonymous - My understanding is that they are not available for home sale, but are still Kirkland brand; the sign on the food court menu (see above) says Kirkland Signature.

I love the wings! I put them in the oven and crisp them up even more, I can’t get enough of them.